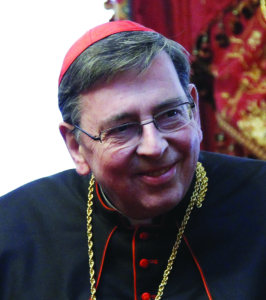 Cardinal Kurt Koch, president of the Pontifical Council for Promoting Christian Unity, gave an important address on December 16 at the Orthodox Centre of Chambésy (Switzerland). The title of his address was “Towards the Unity of the Church in the East and West.” The address is an overview of the Catholic Church’s theological dialogues with the non-Chalcedonian Churches and with the Orthodox Church, as well as the challenges faced by the dialogues in the future. Particularly interesting are the Cardinal’s comments with respect to the Orthodox position relating to primacy at the universal level.

With respect to the Ravenna document approved by the Joint International Commission for Theological Dialogue between the Orthodox and Catholic Churches in 2007, the Cardinal noted: “The Ravenna document represents an important advance in Orthodox-Catholic dialogue in that, for the first time, the two partners in dialogue were able to declare together that the Church needs a protos at all levels of her life and therefore also at the universal level. This encouraging step, however, was overshadowed by the fact that the Russian Orthodox Patriarchate, whose representatives were absent in Ravenna due to intra-Orthodox problems, does not share its conclusions and, on December 26, 2013, issued its own statement, very different from that of the International Commission, on the question of primacy at the universal level of the Church.”

With respect to the future, the Cardinal’s observations included the following: “The strong point of the Orthodox Churches lies in their synodality, which is why Pope Francis has repeatedly stressed that the Catholic Church, in its ‘dialogue with the Orthodox brothers, [has] the opportunity to learn something more about the sense of episcopal collegiality and the experience of synodality.’ The Catholic Church will indeed have to admit that, in her life and in her ecclesial structures, the level of synodality that would be theologically possible and necessary has not yet been developed and that it is in the strengthening of synodality that undoubtedly lies ‘the most important contribution of the Catholic Church to the recognition of the primacy.’ On the other hand, the Orthodox Churches should be expected to recognize through ecumenical dialogue that a primacy is not only possible and theologically legitimate as well at the universal level of the Church, but also necessary; that the tensions internal to orthodoxy suggest that it would be useful to reflect on a ministry of unity at the universal level and that this does not in any way go against the Eucharistic ecclesiology which is so dear to them but is on the contrary compatible with it, as Metropolitan John D. Zizioulas, former co-chairman of the International Joint Commission, keeps reminding us.” (Footnotes omitted. Google translation of the French.)

The issue of whether the Orthodox will recognize primacy at the universal level is now a critical issue in the religious dispute involving Ukraine.

For example, does the Ecumenical Patriarch possess special powers different from other primates, such as the ability to consider appeals of hierarchs from other Local Orthodox Churches and the ability unilaterally to confer autocephaly?

Will the ultimate settlement of the Ukraine dispute involve a de facto recognition of such powers?

Sadly, one’s position on primacy at the universal level may now be influenced by the high emotions generated by the dispute in Ukraine and by one’s own self-interest in that dispute, rather than by a dispassionate consideration of the universal primacy issue.