British report: Nigerian Christians say “We are not safe in our homes” 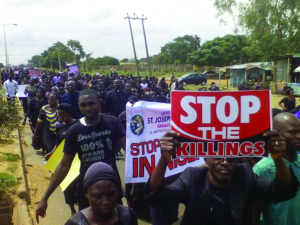 A new report from the Humanitarian Aid Relief Trust, HART, has revealed how many Christians were killed by the Islamic terrorist groups in the passing year 2019.

According to the report, the persecution of Christians in Nigeria has seen about 1,000 Christians killed by Islamic militants.

HART, headed by a member of the British House of Lords, Baroness Cox, discovered that Christians in the north and central regions of the country were the most severely affected.

According to the group, the constant attack of “harmless” persons, especially worshippers and clerics, portends danger for Christianity as it has ignited fears in clerics deployed to the northeast to work.

The group, in its end-of-year report, recounted the killing in August of Reverend Father David Tanko and many others in the northern part of the country, adding that over 1000 Christians were affected in 2019 alone.

Recently, they explained that suspected terrorists had threatened to attack other clerics, including a missionary sister identified as Sister Chioma Ibe after the killing of Fr. Pius Ani.

Fr. Pius Ani and Sr.Chioma Ibe, it was learned, were two Catholic missionaries whose work in the northern part of Nigeria had drawn a lot of accolades and admiration but had also exposed them to the Boko Haram terrorist group.

The killed priest was a pastor of St. Theresa Catholic Church in Maiduguri, Borno State, working with Sr. Chioma Ibe, who was the principal of the parish school. Both the priest and the nun were said to be working with youths by converting the youth and adults of that town to the Catholic faith. The parish school is open to both Christians and Muslims.

It was learned that with their teachings many were converted to Catholicism and embracing the Christian doctrine, with no fewer than 50 students receiving the sacrament of baptism, welcomed into the Catholic Church and receiving their First Holy Communion.

According to reports, the popularity of these missionaries has spread widely to the predominantly Muslim state, exposing them to the threat of the Islamic fundamentalist group who have made several unsuccessful attempts to kill both missionaries.

This led to the priest and nun being transferred out from the northern part to another church in the south where they both continued their good work of ministering in the church and also managing the parish school. According to the reports: “Islamist Fulani militia continue to engage in an aggressive and strategic land-grabbing policy in Plateau, Benue, Taraba, Southern Kaduna and parts of Bauchistate. They attack rural villages, forcing villagers off their lands and settling in their place — a strategy that is epitomized by the phrase: “Your land or your blood.”

According to HART, the exact number of Christians killed by Islamic militants Boko Haram and Fulani herdsmen was unknown, though the data suggests the figure to be sitting at around 1,000 for the year.

The organization believes that some 6,000 have been killed since 2015, with an additional 12,000 displaced.

“In every village, the message from local people is the same: ‘Please, please help us! The Fulani are coming. We are not safe in our own homes,’” HART said in the report. 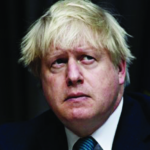 In remarks somewhat rare for a European political figure, British Prime Minister Boris Johnson called on the British people to remember “those Christians around the world who are facing persecution.”

“For them, Christmas Day will be marked in private, in secret, perhaps even in a prison cell,” he said. “As Prime Minister, that’s something I want to change. We stand with Christians everywhere, in solidarity, and will defend your right to practice your faith.” The Prime Minister began his message by acknowledging that Christmas Day is “first and foremost, a celebration of the birth of Jesus Christ.” (catholicherald.co.uk)