This ordinary young Italian was filled with the love of God. He will be beatified on October 10. 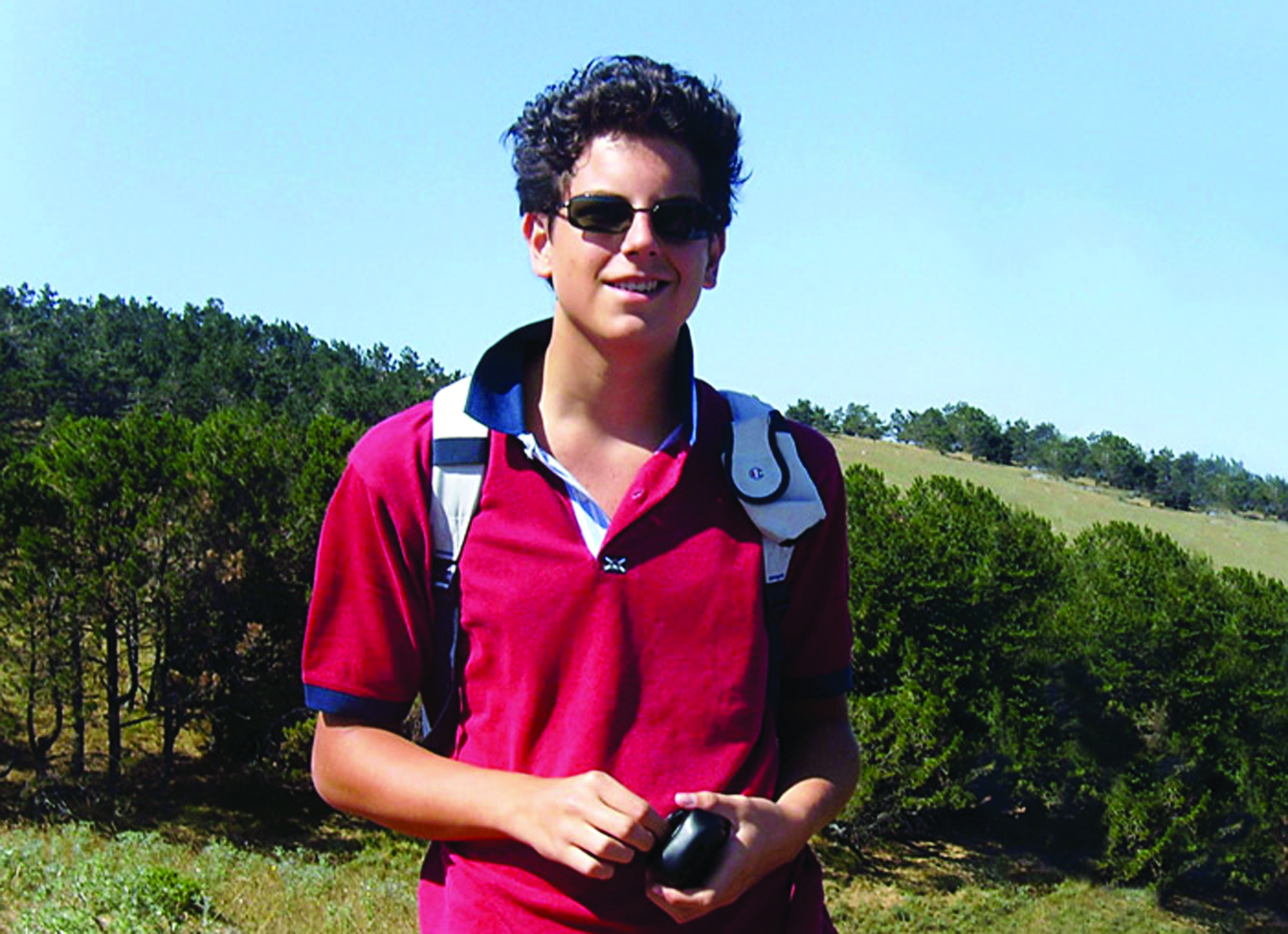 Carlo Acutis, who died unexpectedly at age 15 in 2006. He hiked, played soccer, went to daily Mass and was filled with the love of God. He will be beatified in Assisi, where he is buried, on October 10. 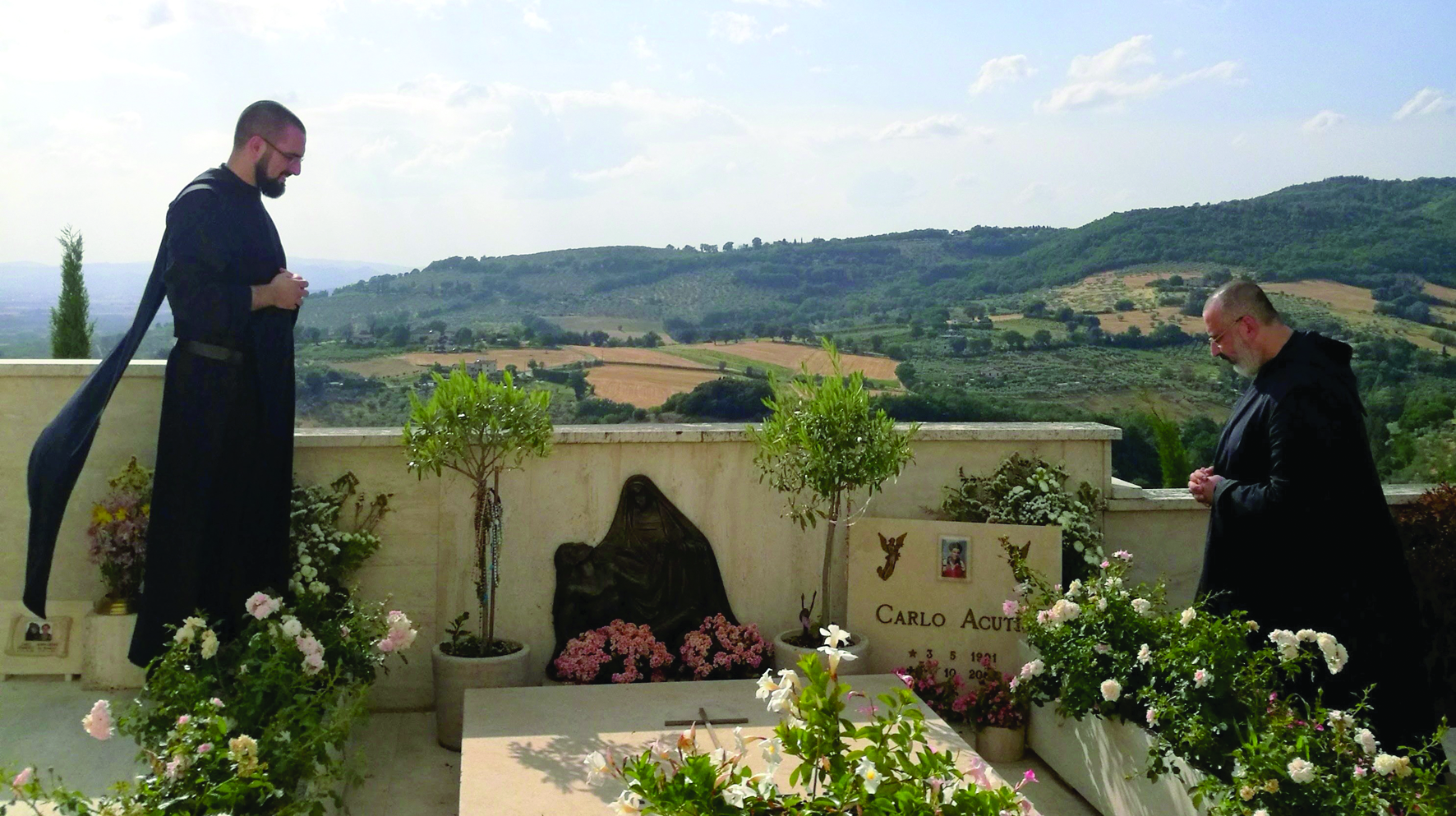 Two Franciscans praying at his tomb.

Pope Francis has approved a miracle attributed to Carlo Acutis, paving the way for his beatification, which will take place on October 10 in Assisi, where he is buried. Carlo was in many ways an ordinary young man. He had a PlayStation. He made awkward videos with his friends. His favorite cartoon was “Pokémon.” But now, on October 10, he becomes “Blessed Carlo Acutis.”

It was announced February 22 that Pope Francis had approved a miracle attributed to Acutis, paving the way for his beatification in Assisi, where he is buried. Acutis’ intercession reportedly helped to heal a Brazilian child suffering from a rare condition of the pancreas in 2013.

Acutis’ mother, Antonia, doesn’t know how Carlo came to love Jesus. He’d been baptized as a baby, but the family didn’t practice the Faith. Perhaps it was their Polish nanny who told Carlo about Jesus. Regardless of the source, Carlo had a deep love for Jesus even as a preschooler, asking his bemused mother if they could stop in to see Jesus when they walked past churches in their Milan neighborhood — and even insisting on taking flowers to place at the feet of the Blessed Mother.

Antonia wasn’t sure what to do with this piety in her young son, and she wasn’t prepared to answer his many questions. But as he asked, she began to wonder as well. His curiosity eventually prompted her to take theology classes; beyond just being back at Mass, Antonia was diving into her faith, and all because of Carlo. “He was like a little savior for me,” she said in an interview published last year on the website Aleteia.

Fostering a love of the Faith

Carlo’s longing for the Eucharist drove him to ask permission to receive earlier than was customary. At 7, Carlo received his First Communion and never missed Mass again. Not just Sunday Mass, either. Every day of his life, Carlo went to Mass. Every day, he stole a few minutes to pray in silence before the tabernacle. And while his parents sometimes went with him, Carlo often went alone. When they traveled, Carlo’s first order of business was to find a church and figure out Mass times. Whether or not his parents joined him, Carlo would be there. Every day.

And they traveled quite a bit. Carlo’s deep love of Mary (whom he called “the only woman in my life”) led the family to Marian apparition sites all over Europe. But their pilgrimages became more intentional when Carlo was 11 and got an idea.

After receiving his First Communion, Carlo had begun to lament the many, many people who don’t go to Mass. “They’ll stand in line for hours to go to a concert,” he would say, “but won’t stay even a moment before the tabernacle.” Eager to do something to draw souls to Jesus, young Carlo began to research Eucharistic miracles. He was convinced that people wouldn’t be able to stay away from the Holy Mass if they knew about the miracles of Lanciano and Poznan and the dozens of others recognized by the Church. So Carlo began to research, dragging his parents from one shrine to another in order to take pictures for the website he was building.

This was only 2002, but Carlo was something of a prodigy when it came to technology. When he was only 8 or 9, he had gotten a hold of a university-level computer science textbook, using it to teach himself to code. From there, he moved into animation and video editing, making videos with his friends and dubbing voice-overs on videos of his dogs. Carlo had the tech-savvy, the information, and the drive — the resulting website documenting nearly 150 miracles eventually developed into an exhibit that has traveled the world.

Caring for those around him

But Carlo was no computer geek closeted in a back bedroom. For all his technological skill, Carlo was a friendly, outgoing kid. He was so friendly that his family was reluctant to go on walks with him; Carlo knew everybody, it seemed, and couldn’t help but stop to talk to every person he passed. He had a sensitive heart and was always looking out for those who were suffering: classmates whose parents were going through a divorce, kids who were being bullied.

Carlo’s approach was always friendship. And through that friendship, people were always drawn to Jesus. As pure and as pious as he was, nobody felt judged by the young saint. His uncle says that being with Carlo filled your heart. And that joy left people seeking and wondering, as Carlo’s mother had years before. A young Hindu man who worked for Carlo’s family was baptized as a direct result of his friendship with Carlo, while many others returned to the Faith.

Carlo was particularly close to the homeless people in his neighborhood, packing up food most days to take out to his friends on the street. Though his family was wealthy, Carlo had no patience for excess. He saved up his pocket money to buy a sleeping bag for a homeless friend, and when his mother suggested they buy Carlo such “luxuries” as a second pair of shoes, he revolted. Technology, though, wasn’t a luxury. It was an important part of his apostolate, and Carlo had no qualms about using three computers when building his website. 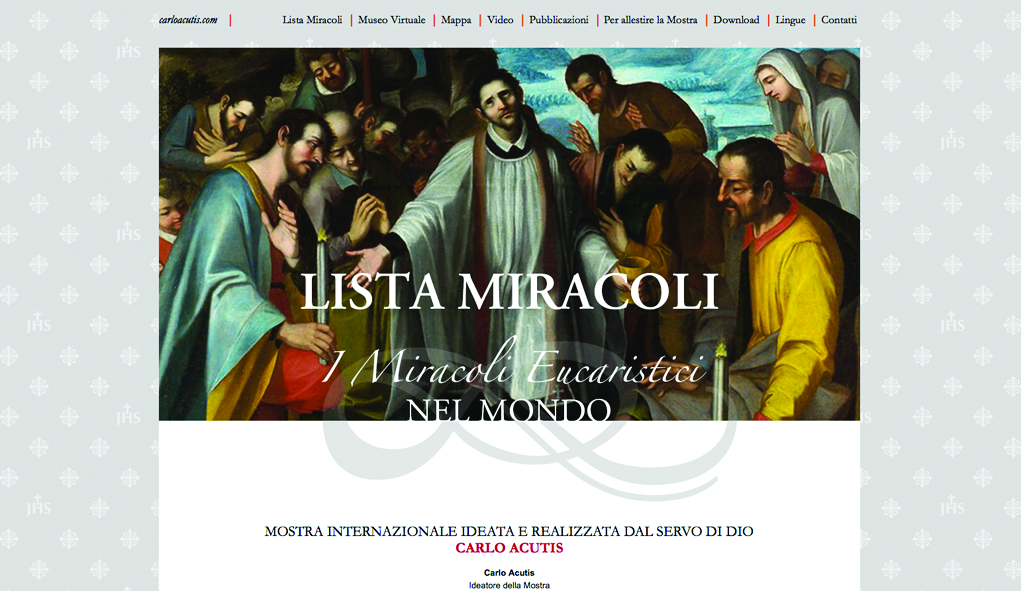 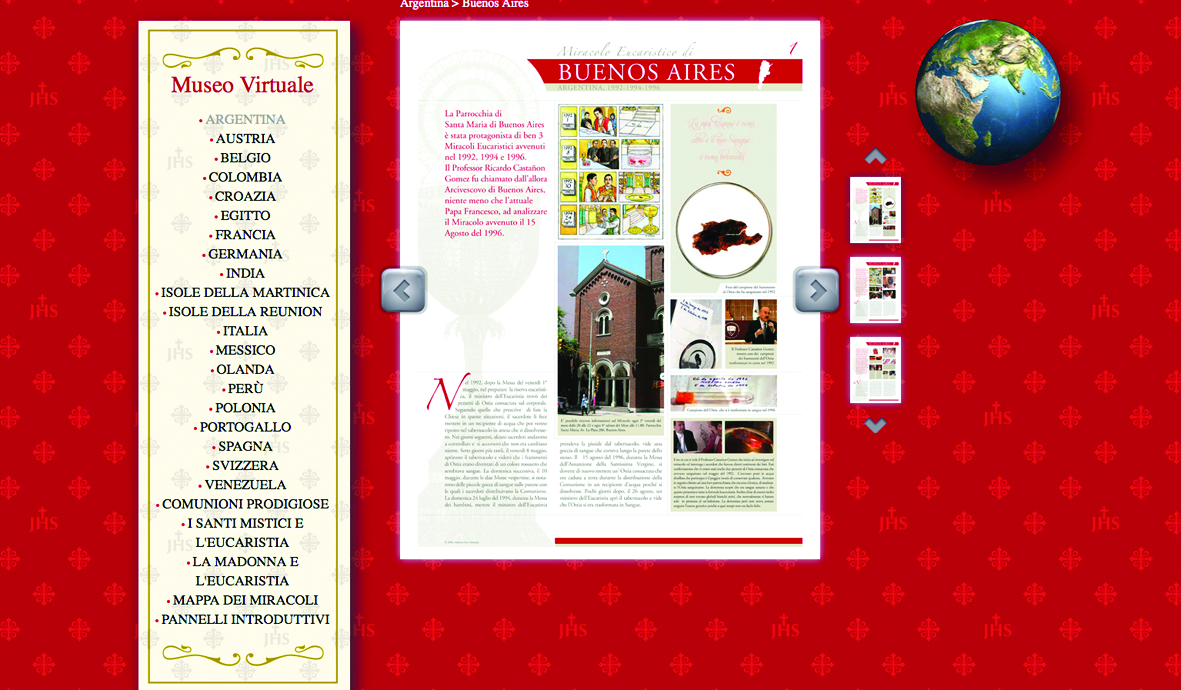 He gathered information and photographs of all the Eucharistic miracles in the world.

Through all this, every day: Mass, the Rosary, silent time before the tabernacle. Carlo insisted that holiness was impossible otherwise. “The Eucharist is my highway to heaven,” he would say, and nothing could get between him and his daily appointment with the Lord. “The more we receive the Eucharist, the more we will become like Jesus,” Carlo said.

“I can die happy”

How did he have the time in between teaching himself to code, playing soccer, riding his bike around Milan to visit the poor, teaching himself the saxophone, patiently explaining technology to his older relatives and making one movie after another? According to his mother, Carlo didn’t waste time on useless things. He limited himself to an hour a week of video games (because he said, he didn’t want to become a slave to them) and focused the rest of his time on things that were valuable. But that didn’t exclude silly animations or videos of his dogs — Carlo knew that something doesn’t need to be catechetical to be valuable, and he enjoyed leisure all the more because its greatest value was in being fun.

Carlo hungered for heaven. “We have always been awaited in heaven,” he said, and throughout his life his eyes were fixed on eternity. So when, at 15, he went to the hospital with the flu and was diagnosed instead with an acute and untreatable leukemia, Carlo wasn’t upset. He was ready to go home. “I can die happy,” he told his mother, “because I haven’t wasted even a minute on things that aren’t pleasing to God.”

He was a remarkable young man, but he was an ordinary man. He had no visions. He didn’t levitate when he prayed. He just lived like heaven was real. He was completely himself, video games and computer programming and all, but entirely Christ’s.

On his website, Carlo wrote a list of instructions for becoming holy, encouraging people to go to Mass daily and confession weekly. But his very first rule for becoming holy was this: “You must want it with all your heart.”

This is the legacy of Venerable Carlo Acutis: an ordinary, modern kid who watched cartoons and used the internet and wanted holiness with all his heart. This is why the world loves him. Because he shows us that holiness is possible.For every one of us. Even if you have an Instagram account. Even if you’re a gamer.

Carlo Acutis was born in 1991. That fact alone is a testimony: holiness is possible. For you. Right now.

But you have to want it.

With a Miracle Approved, Beatification Awaits Computer Programmer Carlo Acutis by Meg Hunter-Kilmer from Our Sunday Visitor, February 24, 2020. © Our Sunday Visitor Publishing. 1-800-348-2440. www.osv.com Used by permission. No other use of this material is authorized. To subscribe visit osvnews.com.