The Gospel relates the story of the boy Jesus, at once prosaic and unfathomable

People who say the Gospels are mere romances, C.S. Lewis once said, evidently do not know what romances are about. Not to mean any disrespect, Lewis said, but the Gospels simply are not good enough for that.

Think of the romance of Arthur, the boy hidden away to await the time when the mysterious Lady of the Lake will give him the sword Excalibur, and he will become king of England. What turns of fate there are in that story, what marvels of magic and love, what crises of loyalty and treachery, wisdom and folly! Think of the romance of Odysseus, harried by the gods from isle to isle on his way home from Troy, only to reach Ithaca at last, and, with the help of his son and a couple of faithful old farmhands, to slay the hundred and eight arrogant men who have been eating up his estate, slaying his cattle and paying unwelcome suit to his wife Penelope.

No such things do we find in the story of Jesus. The accounts of His birth are miraculous, to be sure, and that should not embarrass us, because we are dealing with things divine. Yet they are also spare: some shepherds, two old people who spend their last days in the Temple, and three mystics watching the skies from Persia hear about Him; nobody else. There is no hoard of gold kept by the pixies. There is no Juno with a burning grudge. There is no foundling with a birthmark to identify him many years later. There is no love-potion the nephew drinks while bringing home the woman who is to marry his uncle. There is no man-eating monster prowling about the hall.

The settings too are all wrong. Matthew begins with a dry genealogy. Luke gives us the prosaic details of worldly matters, as if someone were to say, “It happened just after Eisenhower signed the law instituting the Interstate Highway system.” John is fond of incidentals of geography and topology that jog his mind. “This took place,” he says, “in Bethany beyond the Jordan” (1:28), that is, in that Bethany over there, rather than in this Bethany here; as if to say, “I mean the Portland in Maine, not the one in Oregon.” 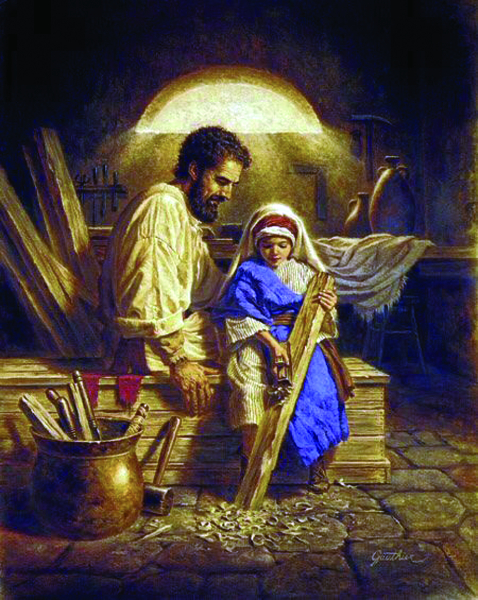 Many a romancer weaves tales about the marvelous youth of his hero, because it is sport to see the man made manifest in the boy. Think of the fanciful Infancy Gospel of Thomas: Jesus breathes life into clay birds; he kills a child with a curse; he stretches a beam of wood to help Joseph finish making a bed. The Church did well to scoff at such stuff. Pontius Pilate, a second-rate functionary, is of more significance to us than are all those fabulous and sometimes malevolent tales.

That Infancy Gospel ends with the episode that Luke recounts, of the twelve-year-old Jesus in the Temple. Here someone may say, “But this is what you were talking about, a hint of how the man to be is present in the boy.” That, though, is to see things backwards. The reason why romances tell of the boyish deeds of heroes is that, in fact, we often do see that the boy is father to the man, as any mother can tell you. We can easily suppose that Luke spoke to Mary and asked her about what Jesus did when he was a boy. If he was hoping for a rousing story, Mary, who “kept all these things in her heart” (Lk. 2:51), surely disappointed him. All we have is the plain account of how, when Jesus was twelve and the family went to Jerusalem for the Passover, the boy stayed behind for a few days, “in the temple, sitting among the teachers, listening to them and asking them questions” (2:46).

The teachers were “amazed at his understanding and his answers” (2:47), but otherwise there is nothing marvelous about it. Jesus behaves exactly as a serious and intelligent boy of his years would do, and the elders respond to him in kind. Boys like to hang around with men and listen to their talk, to hear war stories, or to learn about machines and the specifics and the skills of labor, or to begin, modestly, to engage in discussion of the great questions of good and evil, right and wrong. Men look kindly upon such boys. They draw them out, to help them become men, and to give them some initial recognition of their having set out from the havens of childhood.

Still, there are a few details in this story that are difficult to “fit” into the standard narrative. In a healthy culture, a boy of Jesus’ age would not hang on his mother’s skirts, so there is no surprise that Jesus stays behind; but His adventure is all in teaching and learning. The Word of God is exchanging words. Mary reacts as any mother would: “Son, why have you treated us so? Behold, your father and I have been looking for you anxiously” (2:48). Luke’s word in Greek is teknon, child; the affectionate word John uses to address his disciples (cf. 1 Jn. 1:18). Jesus does not bristle. He also does not apologize. He returns a question with a question, as He would so often do when He was a man: “How is it that you sought me? Did you not know that I must be [about my Father’s things]?” (Lk. 2:49).

Jesus is, in His human nature as a grave and determined boy, genuinely puzzled by the reaction of Mary and Joseph, and they in turn are puzzled: “And they did not understand the saying which he spoke to them” (2:50). Any storyteller worth his brandy would add a moral, telling us that Mary saw the light, or that only much later did Mary understand what Jesus meant, which was thus or so. Luke does neither. We are left to wonder about their wonder. They knew that Jesus was the Son of God, for, said the angel to Mary, “The Holy Spirit will come upon you, and the power of the Most High will overshadow you” (1:35). They could not make a mistake that way. They knew he was not referring to Joseph. But that was not enough. What did it mean, really, that God was the Father, and that in a unique way He was Jesus’ Father? We are too familiar with the words. The universe itself is breaking open: Jesus calls God “my Father.” He who says he has plumbed the depths of that saying is a liar or a fool. As to the vague “things” of the Father, a mere demonstrative pronoun in the Greek, what could they possibly be? Mary and Joseph must have felt the earth tremble beneath them.

And yet, after that, Jesus apparently does nothing astonishing in the eyes of men, not for almost twenty years. Again, if Luke is a mere storyteller, he is a failure. The episode in the Temple seems not to lead anywhere, or to change anything back in Nazareth. Rather, Jesus returns with Mary and Joseph to that no-account village in Galilee, “and was obedient to them” (2:51). The word the RSV translators use, obedient, has as its inner meaning to hear, to heed; but Luke’s Greek, hypotassomenos, has to do rather with a hierarchy of order, a taxonomy of authority. Jesus, the Son of God, places Himself beneath the authority of Mary and Joseph. That order, that authority, already exists, and is a very good thing.

Romance heroes do not do so. Captain Blood went pirating out on his own. Huck Finn went with the escaped slave Jim down the Mississippi on a raft. Tom Jones, unjustly accused, went to the big city.

The Son of God placed himself under human authority. After all these years, I can hope only to have begun to understand what that means.