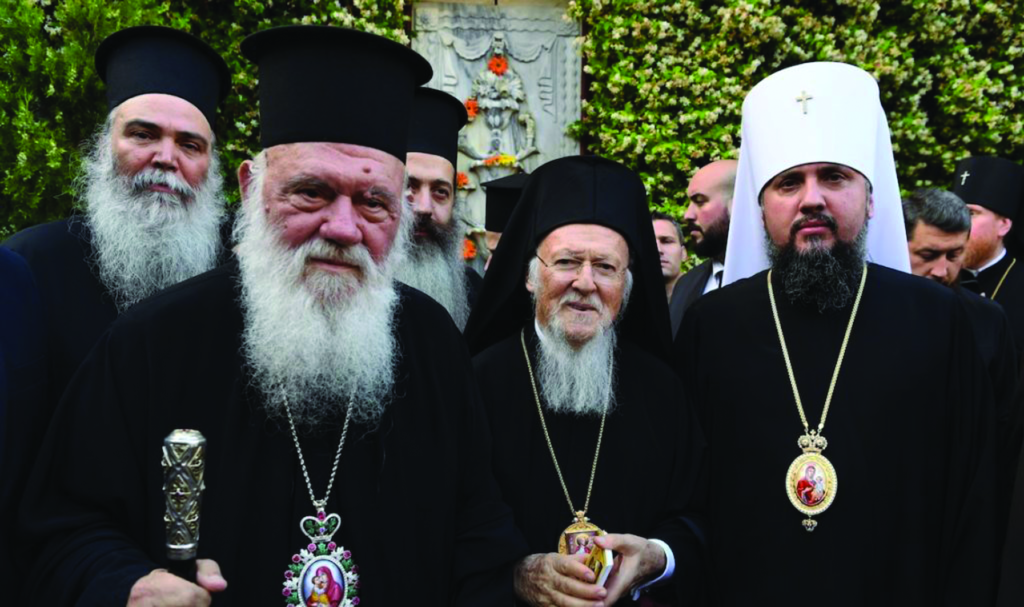 From left: Archbishop Ieronymos of Athens and All Greece, Ecumenical Patriarch Bartholomew (center), and Epifaniy, primate of the new Orthodox Church of Ukraine (OCU).

Because of the missionary efforts of St. Paul, Greece became the first European area to accept Christianity. Important episcopal sees were subsequently established in cities such as Athens, Corinth and Thessaloniki. From the fourth century until 732, most of what is modern Greece was part of the Exarchate of Illyricum under the Pope of Rome. In 732 Byzantine Emperor Leo III, unhappy with the Pope’s support of icons, transferred Illyricum to the jurisdiction of the Ecumenical Patriarch in Constantinople. For more than a millennium, the area of modern Greece would remain under the latter’s jurisdiction.

After the Greek revolt of 1821-1828, southern Greece obtained independence from the Ottoman Empire. In 1850 the Ecumenical Patriarchate recognized the jurisdiction of a new Church of Greece over this area and granted it autocephaly. However, the tomos granting autocephaly also provided that the Ecumenical Patriarch needed to be consulted on all important questions. When the Greek State acquired the Ionian Islands (1866) and Thessaly (1881), these areas were added to the Church of Greece.

As a result of the Balkan Wars and World War I, Greece acquired what is now northern Greece, including Thessaloniki, and the size of the state nearly doubled. These “New Lands” were added to the “old Greece.” In 1928, the Ecumenical Patriarch issued a patriarchal act relating to these New Lands. He “provisionally” assigned administrative control of the dioceses of the “New Lands” to the Church of Greece, but he retained supreme canonical authority over them. For example, bishops elected in the “New Lands” must be approved by the Ecumenical Patriarch. Today, certain parts of modern Greece are still under the direct jurisdiction of the Ecumenical Patriarchate. Crete, the Dodecanese islands (such as Rhodes and Patmos), and Mt. Athos are directly under Constantinople and are not part of the Church of Greece.

Today, the Church of Greece consists of 45 dioceses in “old Greece” and 36 dioceses in the “New Lands.” The Standing Holy Synod, which administers the Church, consists of six metropolitans (heads of dioceses) from “old Greece” and six from the “New Lands.” It is chaired by the Church’s primate, Archbishop Ieronymos of Athens and All Greece. At least once a year, a Holy Synod of the 81 diocesan heads meets to decide broader issues. The Constitution of Greece recognizes Orthodoxy as the “prevailing” religion and the salaries of Orthodox clergy are paid by the state.

The decision by the Church of Greece to recognize the right of the Ecumenical Patriarch to grant autocephaly to the OCU was made after two commissions and the Standing Holy Synod concluded that the Ecumenical Patriarch had this right. This was then confirmed by the entire hierarchy with only a small number dissenting. Constantinople is now happy, but Moscow is very upset.