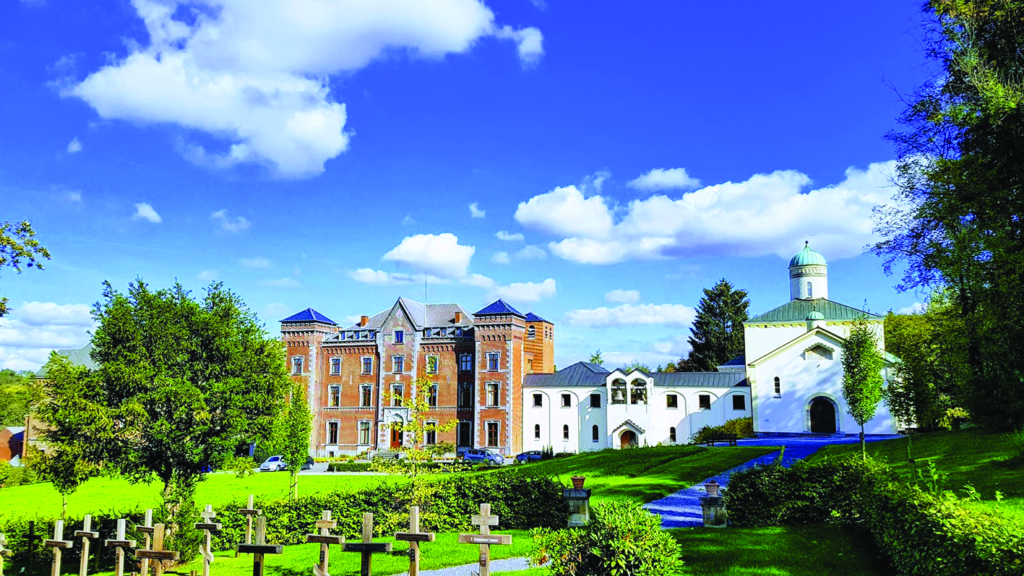 The Abbey of Chevetogne in France with two churches, Latin and Byzantine

In March 1924, Pope Pius XI wrote a letter, Equidem verba, to Abbot Stotzingen, head of the Benedictine Order, saying that the Order should establish monasteries that have Christian unity, especially with the Russian Orthodox, as their special interest. The letter was due in part to the urging of a Belgian professor at the pontifical university of Sant’ Anselmo in Rome, Benedictine Father Lambert Beauduin. Stotzingen was not enthusiastic about the idea, but Beauduin was able to convince Cardinal Mercier of Malines (Mechelen) to support the creation of a Benedictine “Monastery of Unity” at Amay-sur-Meuse, Belgium in December 1925.

The monastery was unique in that it had two separate choirs of monks, one of the Latin rite and one of the Byzantine rite. Although the monks of both choirs were Catholic, the concept was that the common monastic life would enable the two traditions to understand and appreciate each other better. In a sense, the monastery would be a laboratory in which the greater understanding gained would facilitate a closer bond with the Orthodox.

Beauduin firmly believed that the monastery was not an instrument to proselytize the Orthodox but to understand them better. However, this was contrary to the prevailing approach of the Catholic Church at that time, which was to convert the Orthodox to Catholicism. In 1931 an apostolic visitor from Rome informed the monastery that its exclusive function was to train Benedictines for the founding of Catholic monasteries in Russia. Beauduin’s ecumenical approach of promoting a form of unity with Rome which did not involve absorption by Rome resulted in a Church court exiling him from his native Belgium in 1932. However, in many ways, the monks at the monastery continued to adhere to Beauduin’s ecumenical approach.

In 1939, the monastery moved to its current location, an area of mixed farms and woods near the small rural community of Chevetogne, approximately 100 kilometers southeast of Brussels. It was not until 1951 that Beauduin, who had been in exile in France, was allowed to visit and then rejoin the community that he had founded.

While in France, Beauduin had been able to renew his long-term friendship with Archbishop Angelo Roncalli, who had been made Apostolic Nuncio to France at the end of 1944. A year before becoming Pope in 1958, Cardinal Roncalli publicly acknowledged that Beauduin’s approach to ecumenism was the correct one. Dom Beauduin died in 1960 and was not able to see the Second Vatican Council’s adoption of his prophetic view of ecumenism.

Today, the legacy of Dom Beauduin continues at Chevetogne, now recognized as an abbey. At the abbey, there are two churches, Latin and Byzantine. In the Byzantine church, the eastern liturgy is celebrated in Church Slavonic and occasionally in Greek. The eastern liturgies are regularly livestreamed, and excellent CDs of the singing of the Byzantine choir have been recorded.

The community since its founding has published a scholarly ecumenical journal, Irénikon. The abbey has a library of approximately 250,000 volumes specializing in Eastern Christianity and Church unity. For decades, the community has had one of its members on the Joint International Commission for Theological Dialogue between the Catholic and Orthodox Churches.

At the present time, the community has approximately 30 monks, half observing the Byzantine rite and half the Roman rite. The abbey also has an Orthodox monk who is an oblate and whose home parish is in Brussels. The abbey has facilities for accommodating up to 40-50 guests. One interesting item produced by the monks is incense. More information relating to the community can be obtained from its website, monasteredechevetogne.com.