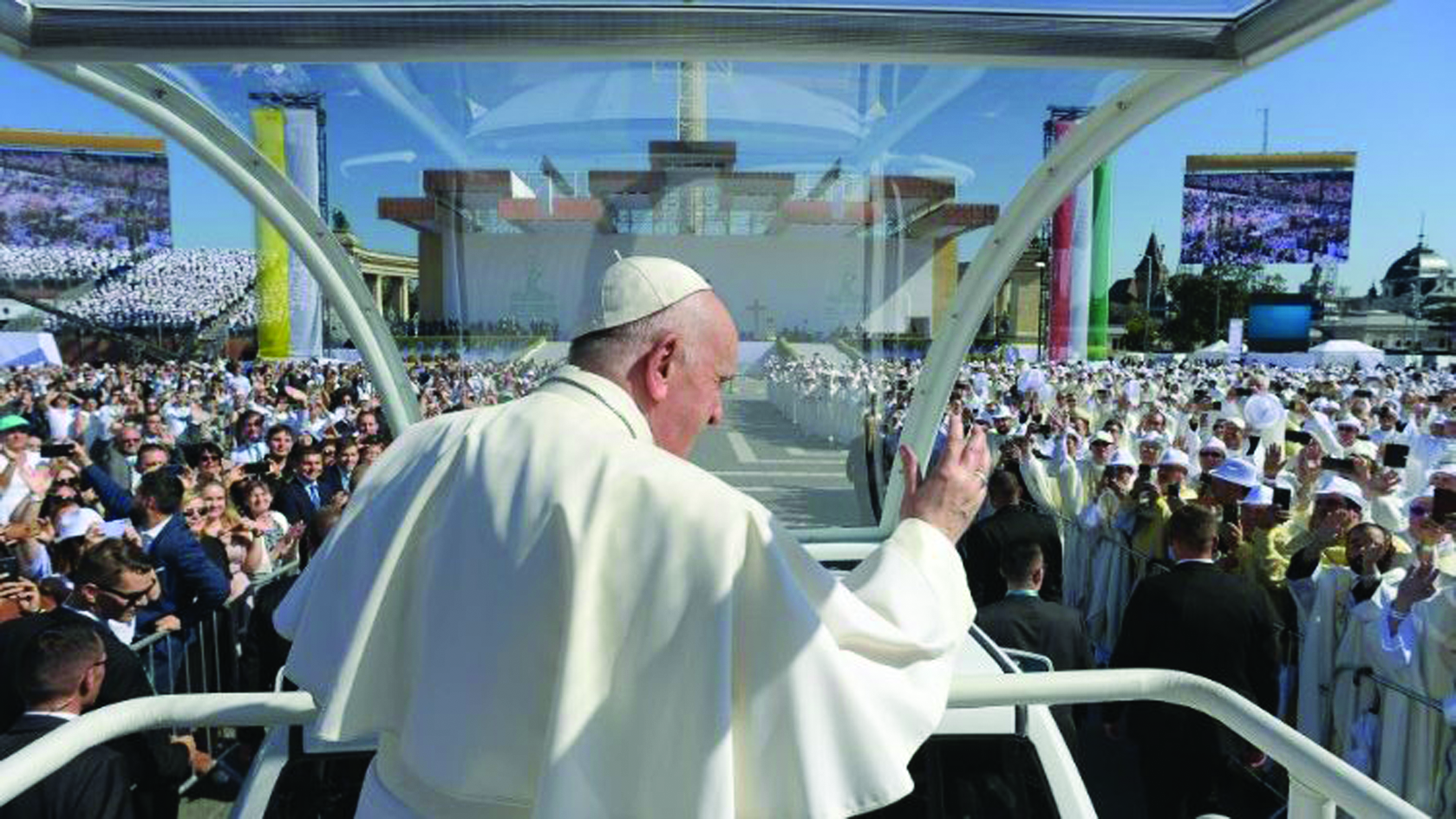 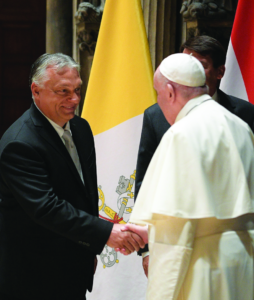 Pope Francis began his first visit to Slovakia, a Catholic-majority country of 5.5 million, on September 12, after spending most of the day in Budapest, Hungary, where he celebrated the closing Mass of the 52nd International Eucharistic Congress and met Hungary’s Prime Minister Viktor Orbán.

It was the first papal visit to the country since 2003.

In Slovakia, he met political authorities, bishops, religious, and priests in the capital city of Bratislava. He also visited a center for the poor and homeless run by the Missionaries of Charity in one of the city’s most impoverished suburbs.

The Pope later met with young people, celebrated a Byzantine Divine Liturgy, and spoke to the minority Roma (gypsy) community in the Luník IX ghetto in eastern Slovakia.

Do not fall into “interior bondage”

After he arrived in Slovakia September 12, Pope Francis exhorted the country’s Ecumenical Council of Churches to prefer God to comfort and security.

Noting the rise of religious freedom in Slovakia in recent years, “after the years of atheistic persecution” of the communist government, Pope Francis implored Christians not to fall into “interior bondage.”

Pope Francis noted “how difficult it is to live your faith in freedom. For there is always the temptation to return to slavery, not that of a regime, but one even worse: an interior bondage.”

“Dear brothers, may this not happen to us! Let us help one another never to fall into the trap of being satisfied with bread and little else,” he said at the meeting.

“Then our goal is no longer ‘the freedom we have in Christ Jesus,’ his truth that sets us free, but the staking out of spaces and privileges, which, as far as the Gospel is concerned, are ‘bread and little else’.”

“Here, from the heart of Europe, we can ask: have we Christians lost some of our zeal for the preaching of the Gospel and for prophetic witness?” he asked.

“It is hard to expect Europe to be increasingly influenced and enriched by the Gospel if we are untroubled by the fact that on this continent we are not yet fully united and are unconcerned for one another.”

The Pope proposed two suggestions in response to the challenge: contemplation and serving the poor.

“Unity is not attained so much by good intentions and agreement about some shared value, but by doing something concrete, together, for those who bring us closest to the Lord. Who are they? They are the poor, for in them Jesus is present,” he said.

“May the gift of God be present on the table of all, so that, even though we are not yet able to share the same Eucharistic meal, we can welcome Jesus together by serving him in the poor,” he said.

He pointed to Sts. Cyril and Methodius, ninth century missionary bishops who are recognized as the “Apostles of the Slavs.” They adapted the Greek alphabet into a script for the Slavonic language, creating the “Cyrillic” alphabet used to translate the bible into Slavonic. “As witnesses of a Christianity still marked by unity and zeal for the preaching of the Gospel, may they help us to persevere on our journey by fostering our fraternal communion in the name of Jesus,” Pope Francis said.

“Some people wanted me to die” 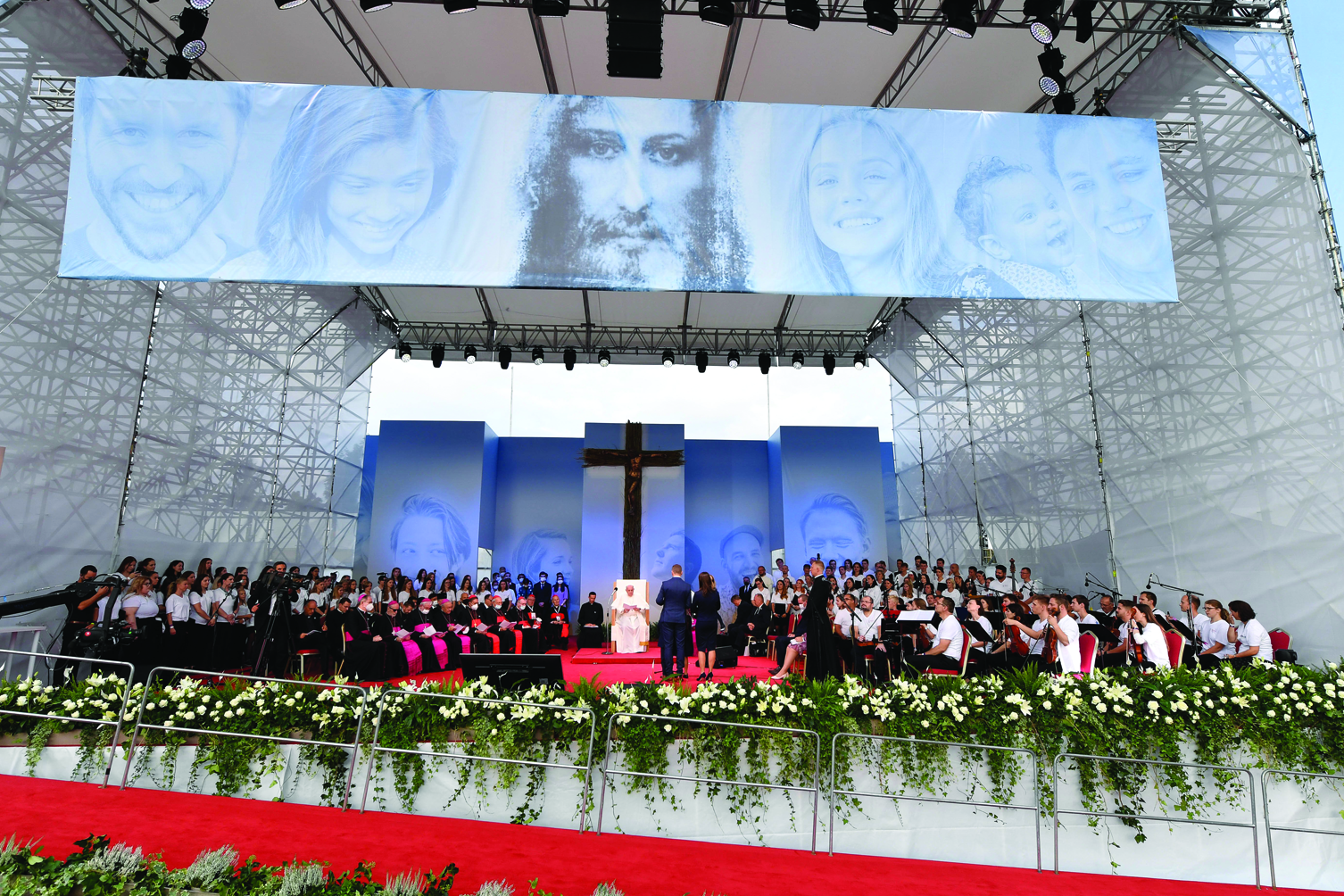 In a subsequent private meeting with Jesuits on September 12, a Jesuit priest asked the Pope how he was doing, to which he replied: “Still alive, even though some people wanted me to die.”

“I know there were even meetings between prelates who thought the Pope’s condition was more serious than the official version. They were preparing for the conclave,” he added. “Patience! Thank God, I’m all right.”

The text of the Pope’s private September 12 meeting with Jesuits in Slovakia was published by Jesuit magazine La Civiltà Cattolica on September 21.

During the encounter, one priest spoke with Pope Francis about tension in the Catholic Church in Slovakia, saying that some people see Francis as “heterodox,” while others “idealize you.”

“We Jesuits try to overcome this division,” he said, asking: “How do you deal with people who look at you with suspicion?”

Pope Francis noted that “there is, for example, a large Catholic television channel that has no hesitation in continually speaking ill of the Pope.”

“I personally deserve attacks and insults because I am a sinner, but the Church does not deserve them. They are the work of the devil,” he said.

“Some people accuse me of not talking about holiness,” he continued. “They say I always talk about social issues and that I’m a communist. Yet I wrote an entire apostolic exhortation on holiness, Gaudete et exsultate.”

Condemning “every form of anti-Semitism”

Pope Francis on Monday, September 13 recalled the great suffering endured by the Jewish community in Slovakia during the Holocaust and encouraged Jews and Christians to be united in condemning violence and anti-Semitism.

“Dear brothers and sisters, your history is our history; your sufferings are our sufferings,” the Pope told Slovakia’s Jewish community in Bratislava. “Now is the time when the image of God shining forth in humanity must no longer be obscured. Let us help one another in this effort,” he said.

Francis noted that, “in our day too, so many empty and false idols dishonor the Name of the Most High: the idols of power and money that prevail over human dignity; a spirit of indifference that looks the other way; and forms of manipulation that would exploit religion in the service of power or else reduce it to irrelevance.”

“But also forgetfulness of the past, ignorance prepared to justify anything, anger and hatred,” he added.

“I repeat: Let us unite in condemning all violence and every form of antiSemitism and in working to ensure that God’s image, present in the humanity he created, will never be profaned.”

Bratislava had a large Jewish minority for centuries, with the first record of the Jewish community in the city dating to 1251.

In 1930, 15,000 Jews lived in Bratislava, which at that time had a total population of 120,000. During World War II, almost all of Bratislava’s Jews were deported to concentration camps or labor camps. Around 11,500 Jews then living in the city were murdered in the Holocaust.

Today, Bratislava has the largest Jewish community in Slovakia, numbering around 500.

Confession is the “Sacrament of Joy”

Pope Francis told young Slovakian Catholics at an event on Tuesday, September 14, that confession is an “infallible remedy” for the times when they are feeling down.

Responding to a question from Petra Filová, a 29-year-old student, about how to overcome obstacles to God’s mercy, he said: “Today, there are so many disruptive forces, so many people ready to blame everyone and everything, spreaders of negativity, professional complainers.”

“But when we feel downcast — because everyone in life is a little down at certain times; we all know this experience — what are we to do? There is one infallible remedy that can put us back on our feet. Petra, it is what you said: confession.”.

The live-streamed event took place at Lokomotiva Stadium, attended by an estimated 25,000 exuberant young people, began with an introduction by Archbishop Bernard Bober of Košice, followed by three testimonies.

The Pope encouraged youngsters to see that God’s mercy, not their sins, is what lies at the heart of confession.

He said: “I will give you a little piece of advice: After each confession, sit still for a few moments in order to remember the forgiveness you received. Hold on to that peace in your heart, that inner freedom you are feeling; not your sins, which no longer exist, but the forgiveness that God has granted you, the caress of God the Father. Just hold on to that; don’t let it fade. And the next time you go to confession, remember: I am going to receive again the embrace that did me so much good. I don’t go to a judge to settle accounts. I go to Jesus who loves me and heals me.”

The Pope also answered a question about the value of chaste love, posed by Peter Lešak, a 37-year-old company manager who is married with three daughters.

The Pope said: “Love is our greatest dream in life, but it does not come cheap. Like all great things in life, love is beautiful, but not easy.”

While love may begin with an emotion, he noted, it should not be reduced to a mere feeling.

“Love is not about having everything now; it is not part of today’s throwaway culture. Love is fidelity, gift and responsibility,” he commented.

The Pope also offered the example of a local, Blessed Anna Kolesárová. Lokomotiva Stadium was the site of the 16-year-old Slovakian laywoman’s beatification on September 1, 2018, a martyr killed “in hatred of the faith.”

In 1944, Soviet troops were passing through Kolesárová’s district. When a soldier entered her home and found the family in hiding, he attempted to rape Kolesárová, threatening her with death if she did not comply. Kolesárová refused, and the soldier shot her in front of her family.

The Pope told young people that Kolesárová taught youth to “aim high,” describing her as a “heroine of love.”

To remain standing beneath the cross

At Slovakia’s national Catholic shrine on Wednesday, September 15, Pope Francis said that Our Lady of Sorrows is a model of how to live the faith with compassion and care for the suffering.

“Mary, Mother of Sorrows, remains at the foot of the Cross. She simply stands there. She does not run away, or try to save herself, or find ways to alleviate her grief,” the Pope said during Mass on Sept. 15, the feast of Our Lady of Sorrows.

“Here,” he said, “is the proof of true compassion: to remain standing beneath the Cross. To stand there weeping, yet with the faith that knows that, in her Son, God transfigures pain and suffering and triumphs over death.”

On the final day of his visit to Slovakia, Pope Francis offered the livestreamed Mass outside the country’s National Shrine of Our Lady of the Seven Sorrows in the young town of Šaštín. According to local authorities, around 60,000 people attended the Mass.

The basilica in Šaštín was built to honor the image of Our Lady of the Seven Sorrows, a figure so important to the people of Slovakia that Pope Pius XI declared her the country’s patroness in 1927.

Before Mass, Pope Francis prayed with Slovakia’s bishops inside the basilica, reciting a prayer of entrustment to Our Lady of the Seven Sorrows.

“Mother of the Church, Consoler of the Afflicted, with confidence we turn to you, in the joys and struggles of our ministry,” they prayed. “Look upon us with tenderness and open your arms to embrace us.

“Queen of the Apostles, Refuge of Sinners, you know our human limitations, our spiritual failings, our sorrow in the face of loneliness and abandonment: with your gentle touch heal our wounds.”