“His Modesty, His Humility”

“His Modesty, His Humility” 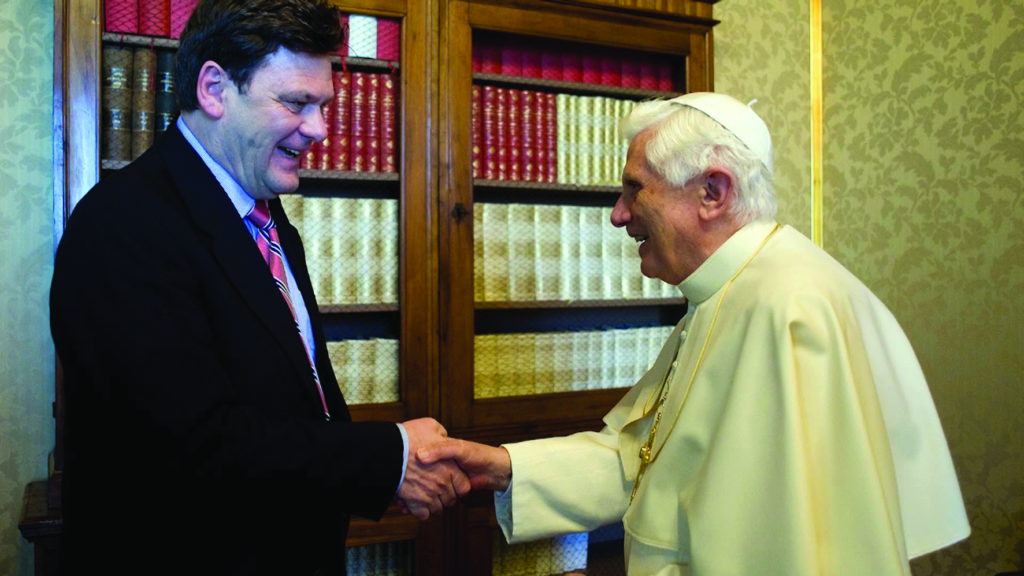 Christocentrism, the revival of the Church, the recognition of the beauty of the Latin Mass — in these ways Benedict XVI has “paved the way for the Church of the future.” An interview with Peter Seewald, biographer of Emeritus Pope Benedict XVI

Peter Seewald’s monumental new biography of Benedict XVI, which will be published in English in November 2020, pays homage to an unparalleled personality and Pope who has left a lasting mark on the Church. Inside the Vatican had a chance to interview Seewald about his last conversation with Benedict, his theology, and the colossal task of writing his biography.

Inside the Vatican: Mr. Seewald, your new book is a pretty “hefty” tome—how long have you worked on it?

Peter Seewald: I began with the work in 2012 when Benedict XVI was still Pope. It was important to me to show the life of Joseph Ratzinger in a historical context. With some disruptions, I would say, I have worked on it for about five years altogether.

What sources did you use for gathering information?

Seewald: The information is based on archival and book research and interviews with about 100 witnesses. Additionally, I used the information from the interview books I have published with Ratzinger as Cardinal, as Pope, and as Pope Emeritus. Last but not least, I could ask Benedict XVI himself for biographical information in countless sessions, especially to understand his resignation.

Did you speak with Benedict for the last additions? 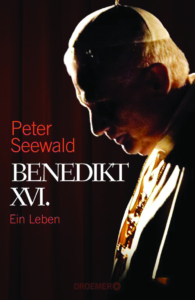 The cover of Peter Seewald’s new biography of Benedict XVI, to be published in English in November 2020

Seewald: No. My book is not an authorized biography but an independent biography. But I gave the Pope Emeritus some chapters to read before publication. I wanted his opinion. He emphasized to me the section on the encyclical “With Burning Concern,” published in 1937, was striking. He wrote to me: “This is an extraordinary chapter of specific information about the historical context, about its presence in my life and finally about the encompassing meaning of the persecuted Church.” If he liked all chapters, I can not say. My goal was to give access to a work irreplaceable for Church and society and to take the reader on a journey of historical and spiritual importance. The legacy of Benedict XVI is not facing the past but faces the future. You will discover in the teachings of Ratzinger, which stem from a most broad experience and most profound depth of spirit, pointers for the future of Church and society.

How was his physical condition and health during your last visit with him?

Seewald: In the end, he was physically very frail. He found it difficult to speak, but his mind was still wide awake, and his phenomenal memory hadn’t left him. I found it remarkable when he hesitated during my last questions and said, “to answer would inevitably be interference in the work of the current Pope. Everything in this direction, I had to and I want to avoid.” Contrary to the criticism that he would intervene in current affairs as a “shadow Pope,” Benedict XVI, in reality, always showed the most diligent care, that there would be no grounds for such an accusation. He literally affirmed: “My personal friendship with Pope Francis has not only remained but has continued to grow.”

What should we associate above all with Benedict XVI?

Seewald: Ratzinger’s theology was so fully developed early on that he no longer had to change, but only to unfold it. “My basic impulse was,” he explained in one of our interviews, “to expose the actual core of belief under all incrustations and to give this core new strength and dynamism.”This impulse was a continuous constant element of his life. He never worked to develop his own teaching. Like his fellow theologians, such as Henri de Lubac, he saw himself as a modern, progressive theologian who fought for a renewal of the faith. The search for the modern, he believed, should never lead to an abandonment of the timelessly valid. Ratzinger was instrumental in driving the modernization push through the Council, but he was also one of the first to warn against reinterpreting what the Second Vatican Council really wanted.

In addition to his commitment to an unadulterated liturgy, the decisive factor for this Pope was his recourse to the Church Fathers and his relation to Christ. He consistently referred the phenomenon of Church and Christianity back to the figure of Jesus.

In addition to the readmission of the Traditional Mass, his pontificate was marked above all by his Jesus trilogy. None of his predecessors on the PetrineChair had dared to undertake such a task, and in fact, no one was better suited for it than Pope Benedict. His Christology was urgently needed in the face of the destruction and falsification of Jesus’ image and message.

What, in your opinion, is the greatest creative originality of Ratzinger’s theology? 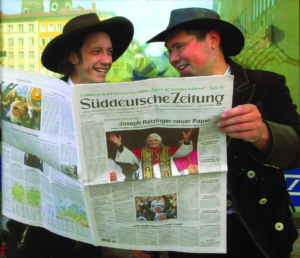 His fellow Bavarians received the news of Benedict’s election in 2005 with enthusiasm.

Seewald: Ratzinger has a personal overview of historical experiences from the beginning of the 20th century in the Weimar Republic to the Digital Age. He knows the situation of the Church in different epochs: as a “people’s Church” (Volkskirche), as a “persecuted Church” under dictatorship and as a “Church of crisis” as we experience it in the present. With his contribution to the social debate, he faced the challenges of the secularized world early on. Already at the end of the 1950s, he insisted that the Church be should be “detached from the world” (Entweltlichung), which almost cost him his career. He had learned from the Nazi era: the institution alone is of no use if the people in it are not there. The task is therefore not to be able to connect to the world but to revitalize the faith internally. In the future, the faith will depend on a core of determined believers, on whom others can then rely. 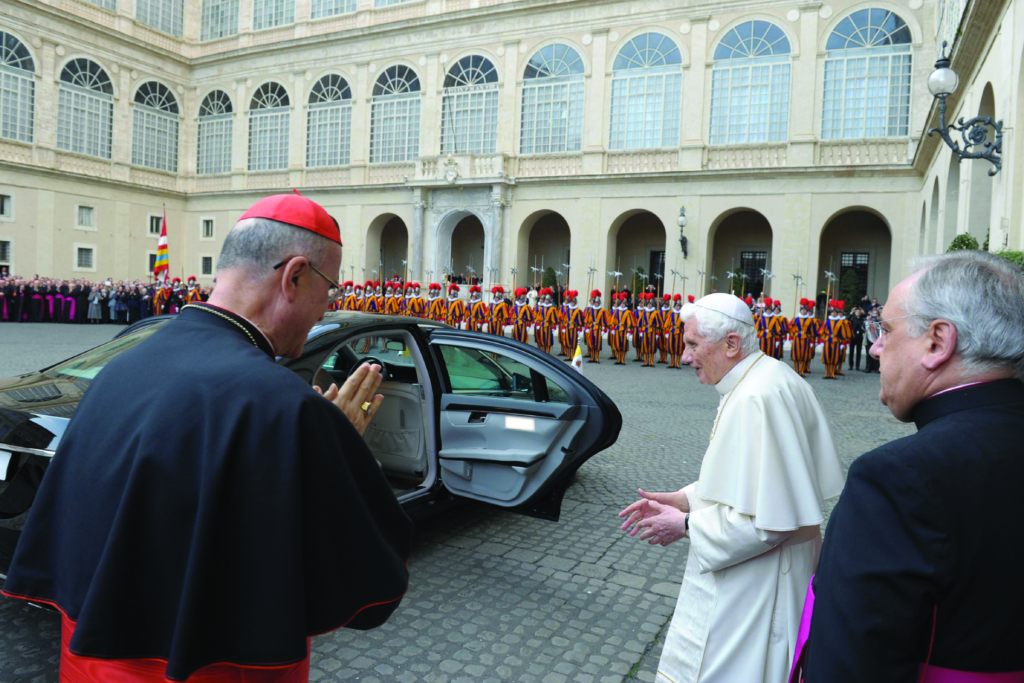 I was always moved by the way he tried to live the synthesis of thought, faith, and action in his personal dealings. Above all, he has shown that belief and reason are not opposites, but are related strands of knowledge. I think Ratzinger’s writings always contain a message that, beyond what is reasonable, communicates something by resonating in the heart.

It was important to him to point out the personal God with whom one can and must have a personal relationship in order to remain in the following of Christ. His modesty, his humility, the ability to simply express complicated things without depriving them of their substance and his intimacy in the service that you can feel have inspired millions of people, even those who were previously distant from the Church and faith.

Can you share a detail or story with us that amazed you?

Seewald: Ratzinger’s biography is characterized by interruptions and trials, in which also often failure lurked — and then again twists of fate that make Ratzinger appear rising like a phoenix from the ashes. He always did things that nobody had dared to do before him. Not least through the act of resignation, through which he cleared the way for a fresh force. One of the chapters tells, for example, of Ratzinger’s unknown health handicaps and his exhaustion after the death of his sister. Above all, I was surprised by his willingness to suffer. He was never vindictive or held a grudge. Even his harshest critics he did not describe as enemies, but at best as “non-friends.”