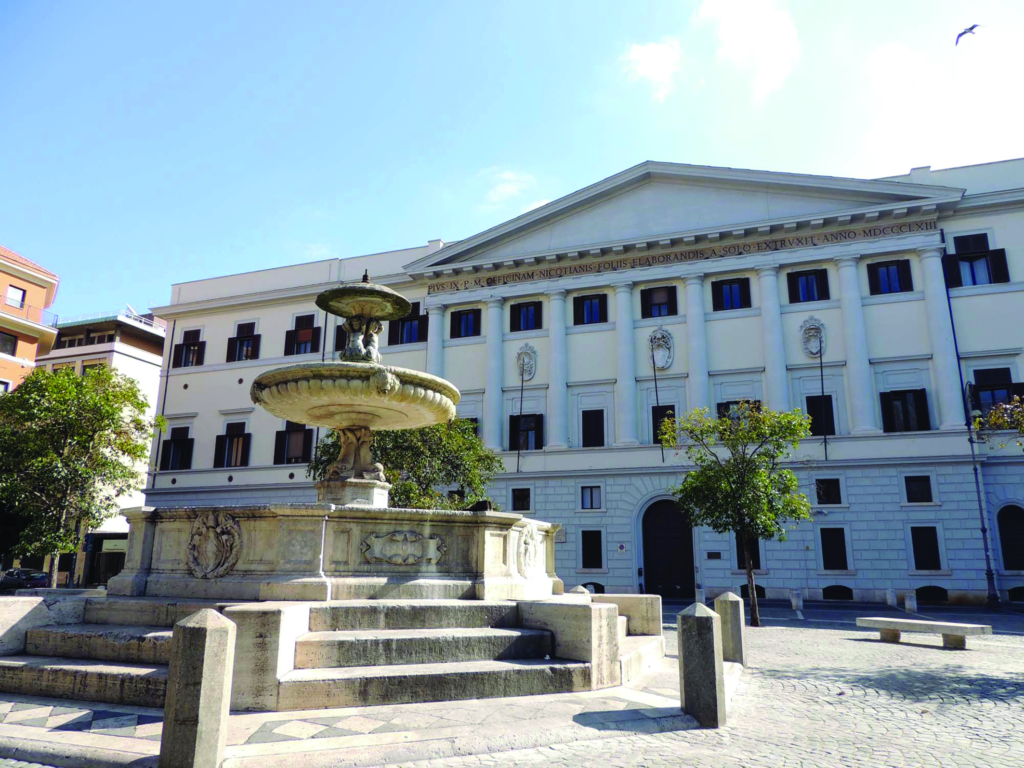 The palazzo on Piazza Mastai built by Pius IX as a tobacco processing house.

Alexander Stille, in his book The Future of the Past, likened walking through Rome without Latin to watching an opera without knowing the libretto. The music, the art, the beauty are just as much yours without the words; but you miss some of the human element of the whole: the drama, the characters, the jokes and incongruities that make us fully ourselves. Latin humanizes the marbled halls and fluted columns of the past. And you stumble into stories you might otherwise pass by. When I studied at Fr. Reginald Foster’s free summer Latin sessions in Rome, I frequently walked through Trastevere on the way up the Janiculum Hill where classes were held. And on those walks, I became familiar with one of the most unusual papal inscriptions in Rome.

One of the glories — and oddities — of papal rule in Rome is that it brought the Popes down to a very human level. The Pope was the mayor, in effect, of a large, very human city. Have a problem with taxes? Ultimately, the Pope was the person in charge of taxation. Garbage on your street? Blame the papal sanitation services. Your neighbor open a new restaurant that makes noise all through the night? Take the problem to the papal government. Popes had to have policies for the intimate details of people’s lives, and as policies changed, people found their lives changed. The lives of Romans were very much bound up with each succeeding pontiff.

And so, when I passed through the Piazza Mastai one day (Mastai is the family name of Pope Pius IX, Giovanni Maria Mastai, who lived from 1792 to 1878 and was Pope from 1846 to 1878, for 32 years) the Latin inscription I found there brought me to a standstill. Could I really be reading this?

A detail of the Latin inscription on the front

“PM” is short for Pontifex Maximus, the Latin word for Pope, so the whole reads: “Pius IX constructed this workplace from the ground up in 1863, for the processing of nicotine leaves.” Nicotine leaves? Yes, that’s what it says, foliis nicotianis, leaves from the plant nicotiana, presumably Nicotiana tabacum, the commercial tobacco plant. And sure enough, when I did a little research, I found that I had stumbled onto Pius IX’s cigar factory.

As head of state, Pius IX had to find sources of revenue. Elsewhere in Italy, the government had decided to maintain a monopoly on the production and sale of tobacco, and Piusthought this an idea worth copying. The upper Tiber Valley had proven suitable for tobacco cultivation — for centuries there had been a tiny independent Italian republic called Cospaia in the valley which produced almost nothing else — and Pius had no particular desire to send his tobacco to the factories of unified Italy, which was threatening to invade and abolish the Papal States entirely. 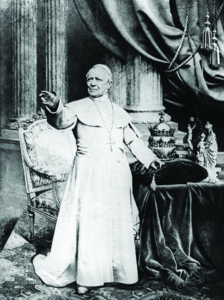 The cigarette only began to become popular in the 1880s, and I suspect that the factory was originally for the production of cigars. They also probably produced snuff—dried, ground tobacco leaves which could be directly inhaled. Pius IX is known to have possessed a snuff box, which he once sold off at auction to raise money.

The Church has had a varied relationship with tobacco. As “the one vice not known to the ancients,” there was never any clear Church position on tobacco.

Some early Popes appear to have condemned it, although their condemnations perhaps refer only to the use of tobacco during Mass, which is still forbidden.

But by the 18th and 19th centuries, it appears to have become generally acceptable, and many Popes have smoked or used snuff, right up to Benedict XVI, who occasionally used to smoke cigarettes (Marlboros by preference).

Francis, on the other hand, recently banned tobacco sales in Vatican City’s commissary, saying through a spokesperson that “no profit can be legitimate if it puts lives at risk.” Pius, of course, did not have access to the same scientific studies.

To return to the Latin inscription: Pius boasts that he built the structure a solo, “from the ground up,” which is true: there was nothing but soil here. The area was still agricultural when Pius decided to develop it, mostly little kitchen gardens and orchards which produced food for Rome.

There is a church right on the other side of the factory called La Madonna dell’Orto — the Madonna of the Garden — which preserves the memory of those gardens. And he calls the building an officinam (in the accusative, as the thing he built), which means any workplace, though when talking about a facility for processing tobacco leaves, I think we’d call it, in our more specific English, a “factory.”

It’s a rather nice building for a factory, with a grand pedimented facade held aloft by eight Doric pilasters, a fact not lost on the Italian government, which, after appropriating it from Pius IX, eventually made it into a government office building. It now housestheAgency for Customs and Monopolies. 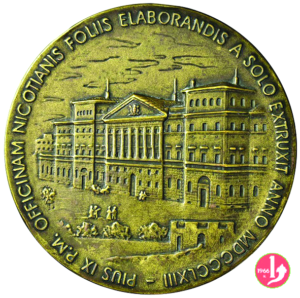 It became an Italian government building only seven years after its completion, in 1870, when the forces of unified Italy invaded Rome. Pius IX boycotted the city, becoming by his own sentencing a “prisoner of the Vatican.” And so this inscription became the last great municipal inscription of papal Rome, the final time the Popes spoke in stone as the sovereigns of the whole city. It seems odd and endearing that the inscription should be for such a humble purpose as the adorning of a cigar factory.

And it’s something which seems outlandish to any student of Classical Latin. I never thought when I was learning the language of Caesar and Cicero that someday I would be reading the Latin inscription on a papal cigar factory.

But that’s one of Latin’s secrets: beneath all that patina of age and the luster of antiquity, you find that people are people, and their concerns tend rather toward the quotidian. The ancient Romans concerned themselves endlessly about paving, plumbing, and pay. Pius IX was the longest-serving Pope, but his biggest contribution to the Roman cityscape came from his effort to make a few extra bucks selling pontifical cigars. *John Byron Kuhner is the former president of the North American Institute of Living Latin Studies (SALVI), and the editor of In Medias Res, the Paideia Institute’s online journal.