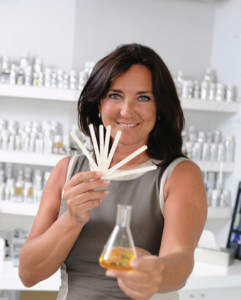 Via dei Coronari is directly across the Tiber from the Vatican, running parallel to the river from Piazza Navona to Castel Sant’ Angelo’s footbridge. On the pilgrims’ itinerary to St. Peter’s Basilica since the Middle Ages it’s always had a Vatican connection. Its name derives from the Coronari, also named Peternostrari, who sold rosary beads (corone in Italian), holy miniatures and other holy objects. Later, during the Renaissance, attracted by the fiscal advantages promised by Pope Sixtus IV (r. 1471-84), high prelates, nobles and prosperous merchants built elegant palazzi here. It’s also rumored that Raphael bought a home here.

When I first lived in Rome, Via dei Coronari was lined with antique dealers, furniture-makers, art galleries, framers, and jewelers, only a few of whom still exist. Yet today, at No. 57 is the only artisan left with a direct Vatican connection, the “nose” Laura Bosetti-Tonatto, the first (since 1986) perfume maker in Italy to create custom-made fragrances and still one of only a few women “noses” worldwide. Besides private individuals including Queen Elizabeth II and several princesses of the Saudi royal family, who introduced her to their local magical rose Taif and to helping the less fortunate women in their kingdom, fashion designers, movie stars, film producers, and sports idols, her clients include deluxe hotels, museums, luxury car and pen manufacturers, and major cosmetic companies. In addition, since October 2006 she’s been an adjunct professor at the University of Ferrara in the Master’s Degree in Cosmetic Science and Technology teaching the courses “Perfumes: Art and Production” and “Aromacology.”

I first noticed Laura’s shop, which she opened in 2015, because of a window display of her “Scents of the Bible” which she’d created for Pope Francis’ extraordinary Jubilee Year of Mercy in 2015/16. These, Incenso delle Chiese di Roma, Nardò della Maddalena and Rosa Mistica, are only three of the 55 fragrances and some 800 products: perfumes, hand and face creams, shower gels, soaps, body lotions, cosmetics, candles, home scents, and sanitizers, to name only a few product types that she sells here in her only shop (a second will be opening “hopefully in July” nearby). All her products can also be ordered from her website: www.essenzialmentelaura.it and some on Ebay.

In the press release about her Biblical scents, Laura recounts: “Smell is the most spiritual of our five senses. It’s written in the Talmud (Berakhòt 43b) that smell is the only one of our senses that gives pleasure to our soul, while the other four are connected to our corporal needs. Smell’s spiritual characteristic can give us the impression of someone’s presence even when no one is there. For example, when the Apostle Peter knelt down in Jesus’ empty tomb, the smell of myrrh and aloe made him think that Jesus was present… Another example is Isaac who, because blind, mistook Jacob for his older son Esau, when he smelled Esau’s clothing that Jacob had put on to trick his father. Smell is connected to memory and often reminds us of an absent loved one, of places we’ve been, or experiences we’ve had. 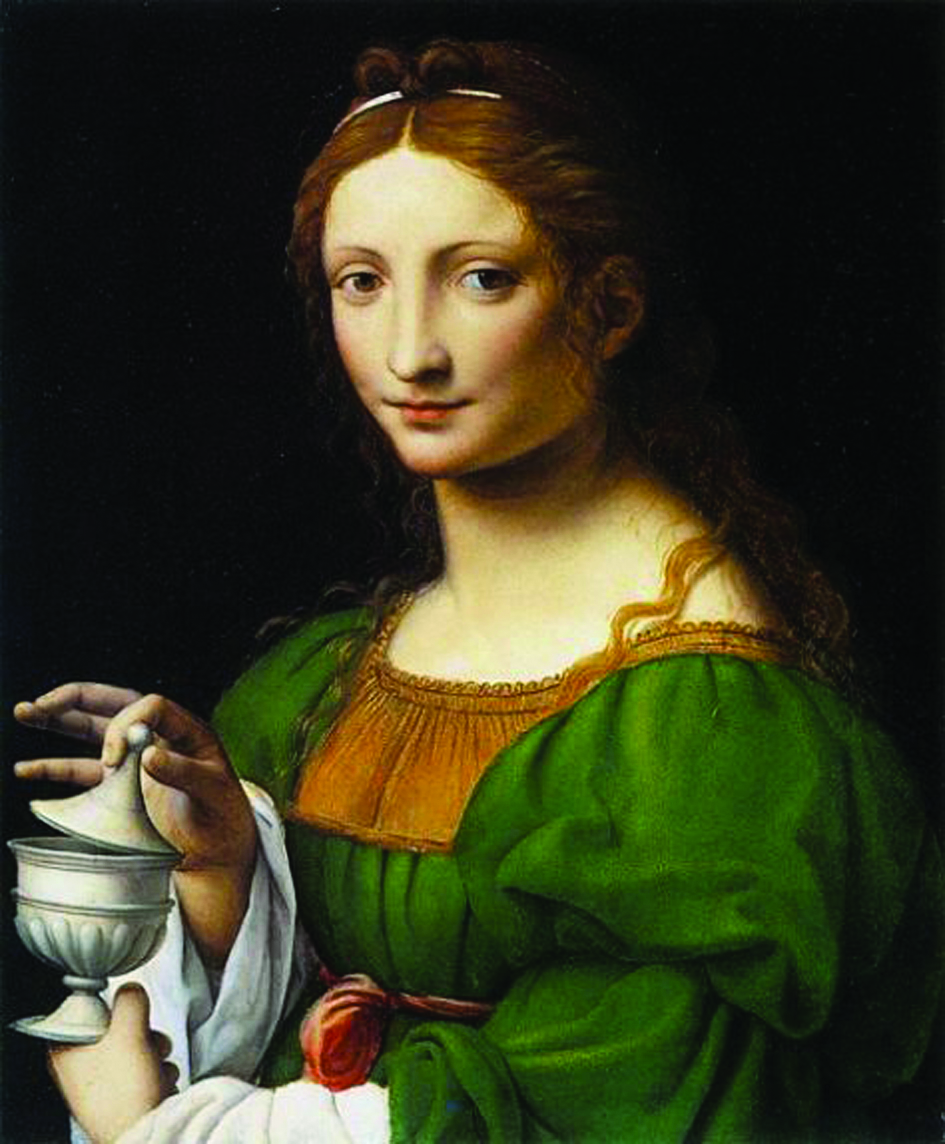 “In the Bible, myrrh, frankincense, cassia, and tuberose,” continues Laura’s press release, “are mentioned frequently, as are the more exotic aromas of saffron, amber, and cinnamon. In Exodus God dictates to Moses the list of fragrances to include in anointing oil, the oil that renders things sacred and that must not be poured ‘on someone else’s body.’”

Incense, cited in Genesis 8:21 and in Psalms 140:2, is a part of the liturgy in many religions. Since the dawn of civilization it’s represented purification, meditation and healing. It’s the first sign of God’s presence when we enter a church. The fragrances of Laura’s “Incense of the Churches in Rome” are resinous balsamic, woody, warm, ambry, and a bit pungent. The Gospels of John 12:3-5, of Mark 14:3-5, Luke 7:3638, and Matthew 26:7-9 all recount that, when Jesus was in the home of Simon the Leper, Mary Magdalene took a pint of pure nard, an expensive perfume with an intense earthy and musky scent, and poured it on Jesus’ feet. Afterwards she wiped them dry with her hair. For this reason Mary Magdalene is the patron saint of perfumers and the protagonist of Laura’s extensive art collection. 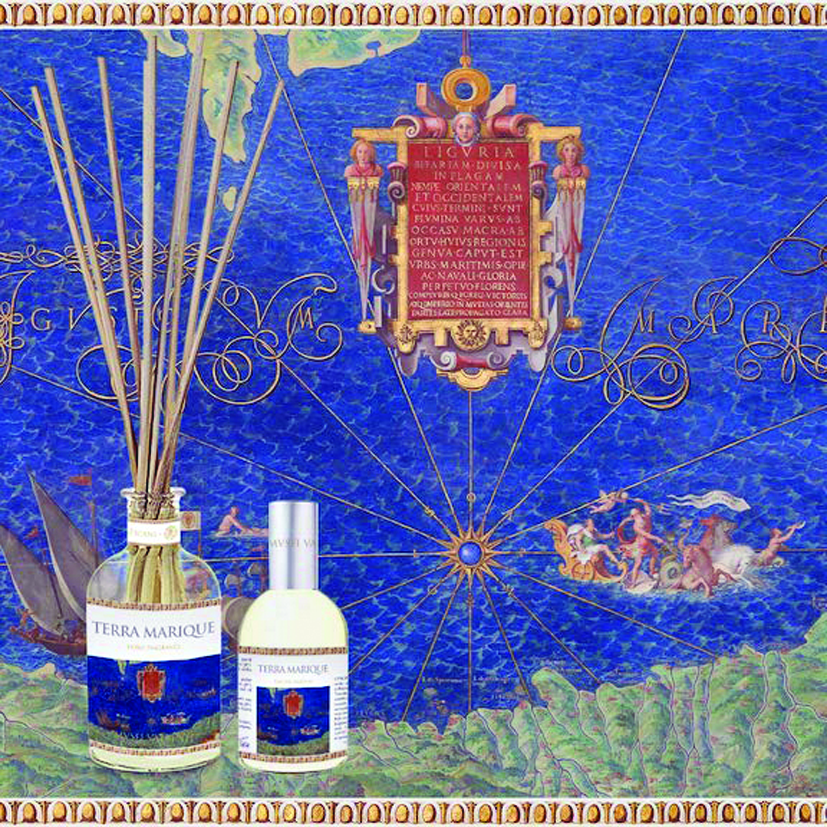 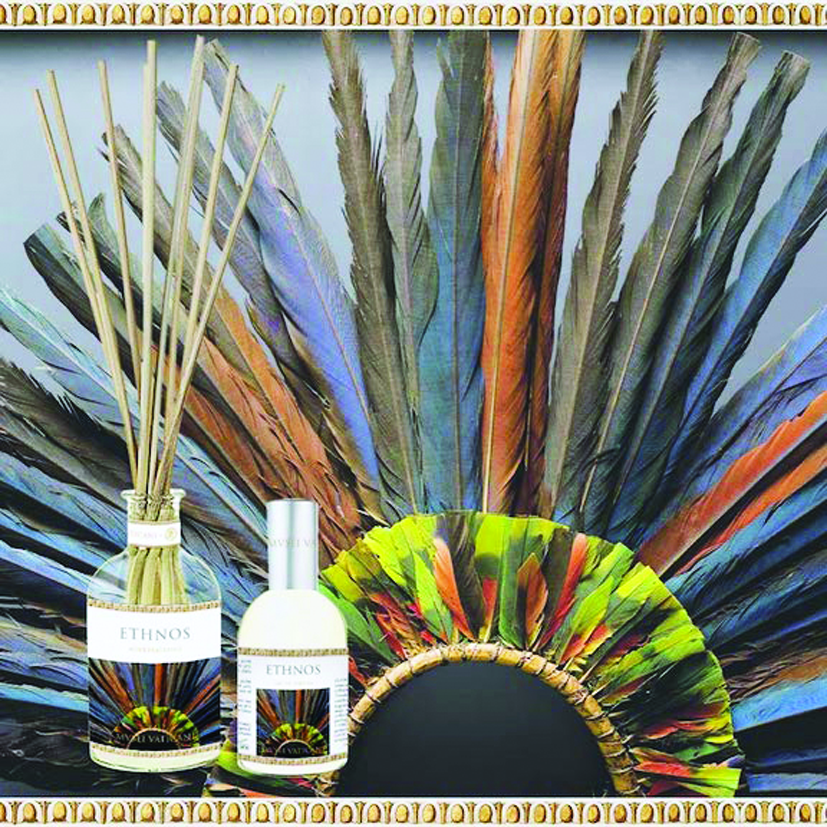 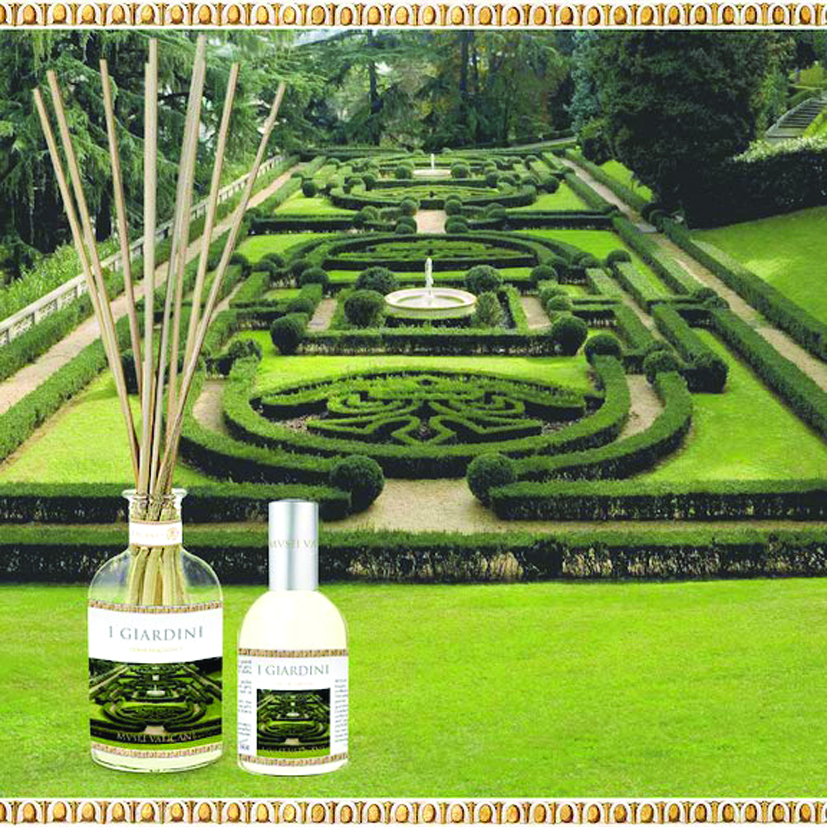 In the Bible, the Rosa Mistica or thornless rose, the oldest ingredient in perfumery, is quoted in Sirach as an attribute of wisdom, in the prophecies of Isaiah to foretell the incarnation of Christ, and is a poetic attribute of the Virgin Mary. It highlights her conception without original sin (so “without thorns”).

Curious to know more, as soon as Rome’s stores were allowed to reopen at the end of April, I finally met Laura, a down-to-earth citizen-of-the-world, and learned her story. Her curriculum vitae is 28 pages long, so after a brief biographical introduction, I’ve limited my highlights to those connected to Rome and the Vatican.

Italophile Laura, a history and cinema buff, classical music lover, especially of opera, and voracious reader, was born and grew up in Turin, but for many years now Rome has been the “city of my heart and of my rebirth after a very difficult life experience.” She also told me that the first scent she remembers is blood mixed with disinfectant that her mother used to clean up a nosebleed after she’d tumbled at around age 3, but soon afterwards, on the pleasurable side, also the scents of her grandmother’s boudoir.

For Laura knew from a young age that she wanted to become “a nose” thanks to her paternal grandmother Ippolita Bosetti, an artist and lover of perfumes, who recognized her potential and encouraged her. “It was our secret,” Laura told me. 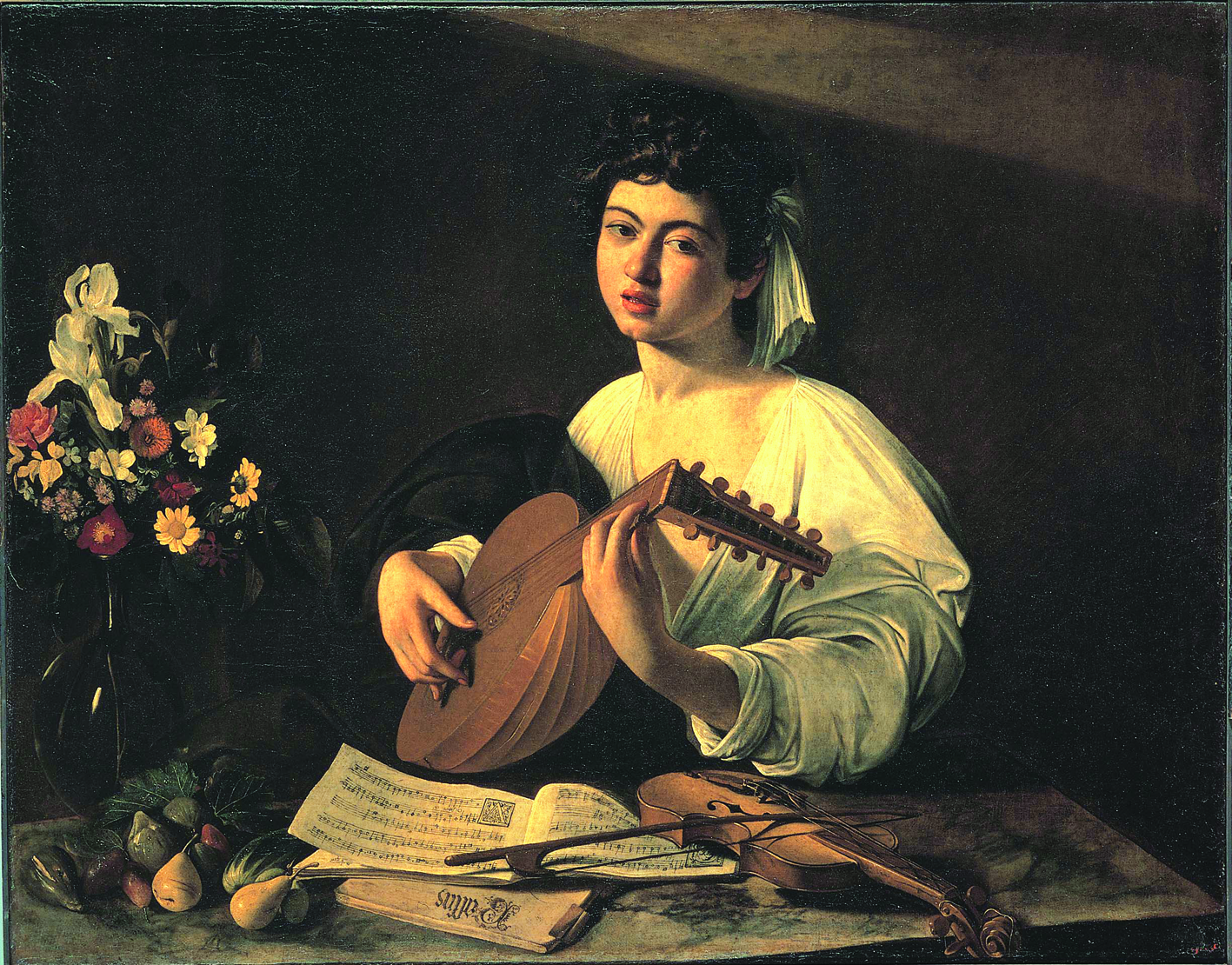 Caravaggio’s Lute-Player in The Hermitage Museum

At age 18 Laura went to Cairo to visit her aunt. Her Uncle Samir, an Egyptian engineer, sympathetic to Laura’s interest, took her to the Khanel El Kalili bazaar, which has a whole street devoted to fragrances. Her career began here in the stall of a certain Hassan, “my first mentor who taught me 80% of what I know today,” Laura affirmed. From Cairo she went to Grasse in Provence where she studied with her two other mentors, the “noses” Serge Kalouguine and Guy Robert before creating her first personal fragrances in Milan at age 21 for the singer Ornella Vanoni and for the movie actress Ornella Muti.

It wasn’t until nearly two decades into her career, in April 2004, that Laura created her first “Roman” and “art-connected” fragrance Artemis, inspired by Artemisia Gentileschi’s Aurora (1627). Today this painting is in a private collection in Rome.

The next year in September, Michail Piotrovskij, the director of the Hermitage Museum in St. Petersburg, asked her to create a fragrance inspired by the flowers, fruits, wood, and human flesh in the Lute-Player by Caravaggio (1571-1610), Laura’s favorite artist. Commissioned by the powerful banker/art collector with close ties to the papacy Vincenzo Giustiniani, it had been painted in Rome in 1595/6.

To celebrate her favorite period of art, Baroque Rome, Laura created two fragrances. Inspired by Rome’s many fountains designed by the Baroque’s great sculptors and architects: Nicola Salvi, Domenico Fontana, Orazio Gentileschi (Artemisia’s father), Bramante, and the two most famous of all: Bernini and Borromini, the top notes of Acqua Barocca are narcissus and lily-of-the-valley. Borromini also inspired her Il Cortile delle Zagare (The Orange Blossom Courtyard), referring to a small courtyard in his Palazzo Spada.

Laura’s latest creations take us across the Tiber to Vatican City, where in 2020 the Museums commissioned her to create three fragrances, also on sale there, inspired by places in Vatican City. An obvious choice was the Vatican Gardens. Founded in c. 1297 during the papacy of Nicholas III, they cover approximately 57 acres or about half of the City. Its Roseto, or Rose Arbor, built by Pope Leo XIII (r. 18781913), was one of Pope-Emeritus Benedict XVI’s favorite meditation spots so rose and jasmine, omnipresent here and all over Rome, are the predominant fragrances of Laura’s Giardini or Gardens. 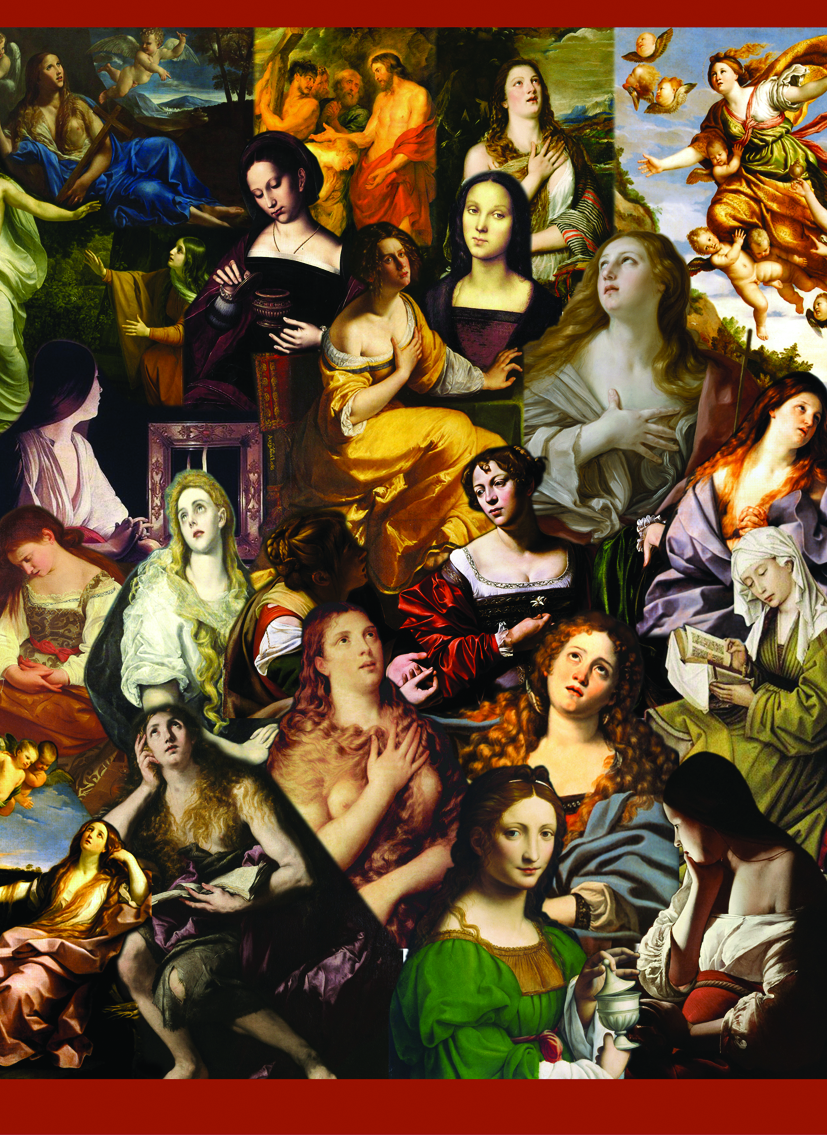 Instead, Laura’s Terra Marique or Land and Sea was inspired by the Museums’ Gallery of Maps. Commissioned by Pope Gregory XIII in 1580 its frescoes by friar and geographer Ignazio Danti depict individual topographical maps of many of Italy’s 20 regions. On one side of the Hall are the regions with Tyrrhenian coastline; on the other, those along the Adriatic Sea. Here Laura’s scents, a mixture of the smells of flowers, orange leaf, woods, fields, and sea, evoke Italy.

In November 2019, after extensive redesigning Pope Francis reopened The Vatican Ethnological Museum, which houses over 80,000 objects and art works from all over the world, and he renamed it Anima Mundi or Soul of the World. At its inauguration The museum’s director, Father Nicola Mapelli, said that this new name reflects the belief that “when we display objects, we don’t display a dead reality, but something that expresses the spirit of a culture through its art.” Laura’s Ethnos, with its masculine scents of leather and wood mixed with honey, evokes this ideal, as do her other perfumes.