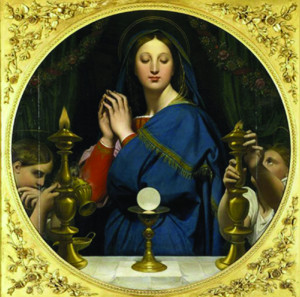 Madonna of the Host, painted by Jean-Auguste Ingres, now in the Museum d’Orsay, Paris

From the Book Mother of Our Savior and the Interior Life, By Rev. Reginald Garrigou-lagrange, O.P.

It is most becoming to insist here a little on what Holy Mass and Holy Communion, received from the hands of St. John, must have meant for Our Blessed Lady.

Why had Mary been committed to St. John on Calvary rather than to the holy women who were also at the foot of the Cross? The reason was that St. John was a priest and had a treasure which they could not give her, the treasure of the Eucharist.

Why among the Apostles was John chosen rather than Peter? One reason is that John alone remained at the Cross, drawn and held there by a strong sweet grace. Another is that he is, as St. Augustine remarks, the model of the contemplative life, of the interior and hidden life which had always been that of Mary and which would be hers till death. Mary’s life will be cast in a very different mould from that of Peter, for she will have no share in ruling the Church. Her vocation will be to contemplate and to love Our Saviour in His sacramental presence, and to obtain by her unceasing prayer the spread of the faith and the salvation of souls. She will be thus in a very real sense the heart of the infant Church, for none other will enter as she into the depths and the strength of the love of Jesus.

Let us consider her in this hidden life, especially at the hour when John celebrated Holy Mass in her presence. Mary has not the priestly character;she cannot perform the priestly functions. But she has received, in the words of M. Olier, “the plenitude of the priestly spirit,” which is the spirit of Christ the Redeemer. Thus she is able to penetrate deeper than St. John himself into the meaning of the mysteries he celebrates. Besides, her dignity of Mother of God is greater than that of ordained priest; she has given us both the Priest and the Victim of the sacrifice of the Cross and she has offered herself with Him.

Holy Mass was for her, in a degree we can only suspect, the memorial and the continuation of the sacrifice of the Cross. A sword of sorrow had pierced her heart on Calvary, the strength and tenderness of her love for Jesus making her suffer a true martyrdom. She suffered so much that the memory of Calvary could never grow dim, and each Holy Mass was a fresh renewal of all she lived through there. Mary found the same Victim on the altar when John said Mass. She found the same Jesus, really present; not present in image only, but in the substance of His Body with His Soul and Divinity. True, there was no immolation in blood, but there was a sacramental immolation, realised through the separate consecration of the bread and the wine: Jesus’ blood is shed sacramentally on the altar. How expressive is that figure of His death for her who cannot forget, for her who bears always in the depths of her soul the image of her Son, outraged and wounded, for her who hears yet the insults and the blasphemies offered Him. St. John’s Mass, with Mary present at it, was the most striking memorial of the Cross as it is perpetuated in its substance on our altars.

It is the same Victim who is offered at Holy Mass and who, in Heaven, offers His glorious wounds to the Heavenly Father.The Body ofChrist never ceases to be in Heaven, it is true. It does not come down from Heaven, in the strict sense of the term, on to the altar. But, without being multiplied, it is made really present by the transubstantiation of the substance of the bread and the wine into Itself.

There is the same principal priest, or offerer, in Heaven and on earth also, “always living to make intercession for us.” (Heb. 7:25) The celebrant of the Mass is but a minister who speaks in Jesus’ name.

When he says “This is my body” it is Jesus who speaks by him. It is Jesus who, as God, gives to the words their power of transubstantiation. It is Jesus as Man who, by an act of His holy soul, transmits the divine power and who continues to offer Himself thus for us as principal priest. If the human minister ever happens to be slightly distracted, the principal Offerer is not distracted, and Jesus as Man, continuing to offer Himself sacramentally for us, sees all that we miss—sees all the spiritual influence exercised by each Mass on the faithful present and absent, and on the souls in Purgatory. Jesus continues to offer Himself in each Mass, the actual offering being made through the hands of His minister. The soul of the sacrifice of our altars is the interior oblation which is always a living reality in His Sacred Heart; through that oblation He applies to us continually the merits and satisfaction of Calvary.

The saints have sometimes seen Jesus in the priest’s place at the moment of consecration. Mary knew the full truth better than any of the saints. Better than any of them she knew that the soul of every Mass was the oblation that lived in her Son’s Heart. She understood too that when, this world having reached its term, the last Mass would have been said, Jesus’ interior oblation would continue for ever, not now as supplication but as adoration and thanksgiving—as the eternal cult expressed even now at Mass by the Sanctus in honor of the thrice-holy God.

How did Mary unite herself to the oblation of Jesus, the principal priest? She united herself to it, as we shall explain later, as universal Mediatrix and Co-Redemptrix. She continued to unite herself to it as at the foot of the Cross—in a spirit of adoring reparation, in petition and thanksgiving.

Model of victim-souls, she offered up the anguish she suffered at those denials of the divinity of Jesus which prompted St. John to write his Gospel. She offered thanks for the institution of the Blessed Eucharist and for all the benefits of which It is the source. She prayed for the conversion of sinners, for the progress of the good, for the help the Apostles needed in their work and their sufferings.

In all that Mary is our model, teaching us how to become adorers in spirit and in truth.

What shall we say of Mary’s Communions? The principal condition for a fervent Communion is to hunger for the Eucharist. The saints hungered for It. When Holy Communion was denied St.Catherine of Siena, her desires obtained that a portion of the large Host broke off, unknown to the celebrant, and was carried miraculously to the saint.

But Mary’s hunger for the Eucharist was incomparably greater and more intense than that of the saints. Let us contemplate reverently the strong loving desire which drew Mary to Jesus in the Blessed Sacrament.

Every soul is drawn towards God, for He is the Sovereign Good for whom we have been made. But the consequences of sin—original and actual—and of innumerable imperfections make God appear unattractive in our eyes and weaken our inborn desire for union with Him. Mary’s soul, however, knew nothing of the consequences of sins and imperfections; nothing ever checked the Godwards tendency of her wonderful charity. Forgetting herself, Mary turned firmly towards God, with a firmness that grew daily as did her merits. The Holy Ghost dwelling in her moved her to give herself to God and to be united to Him. Her love of God, like an intense thirst, was accompanied by a sweet suffering which ceased only when she died of love and entered on the union of eternity. Such was her desire for the Eucharist.