Thronal Feast of the Ecumenical Patriarchate

The Divine Liturgy was attended by the official delegation of the Church of Rome, headed by His Eminence Cardinal Kurt Koch, President of the Pontifical Council for Promoting Christian Unity.

At the end of the Divine Liturgy, the Ecumenical Patriarch addressed the official delegation of the Roman Catholic Church:

“Filled with sentiments of love and honor, we greet and welcome you here at the festive Phanar, as you honorably bear the festal wishes of His Holiness Pope Francis. We entreat Your beloved Eminence to convey to His Holiness our brother the wholehearted thanks of the Church of Constantinople and our Modesty for graciously sending your Delegation and for the participation of the Church of Rome in the events of our Thronal Feast.”

“We communicate our sincere gratitude to our brother Pope Francis for his kind words on our completion of 30 years since we were elected to the Throne of Andrew, the First-Called of the Apostles,” along with our fervent wishes for his forthcoming 85th birthday. Finally, we pray that He who is glorified in His Apostles Andrew and Peter, who imitated and participated in the Lord’s Passion and founded our Churches, may grant you unfailing health and every blessing from above for the continuation of your noble ministry in the Church, and we close with special honor and deep love in the Lord.”

Following the address of the Ecumenical Patriarch, Cardinal Kurt Koch responded by reading a message from Pope Francis:

“Beloved brother in Christ, along the path towards full communion between our Churches, we are sustained by the intercession of the holy brothers Peter and Andrew, our patron saints. The full unity for which we yearn is, of course, a gift from God, through the grace of the Holy Spirit. May our Lord help us to be ready to embrace this gift through prayer, interior conversion and openness to seeking and offering pardon.”

“With these heartfelt sentiments, I renew my warm good wishes for the feast of Saint Andrew, and exchange with Your All Holiness an embrace of peace.” (Ecupatria)

Divine Liturgy Celebrated at Relics of Saint Ambrose of Milan

The Orthodox Divine Liturgy was celebrated December 20 on the Old Calendar feast of Saint Ambrose of Milan, one of the greatest Western Church Fathers, in the Sant’Ambrogio Basilica where the Holy Hierarch’s relics are kept.

The Liturgy was served by Metropolitan Anthony of Korsun and Western Europe (Moscow Patriarchate), Archimandrite Ambrose (Makar) from the Saint Ambrose of Milan parish in Milan, and Moscow Patriarchate clergy from throughout Italy.

The service was sung by a choir from the Kiev Theological Academy and Seminary and the choir of the local Saint Ambrose Church.

Patriarch Kirill: Church Must Not Segregate on Basis of Vaccination 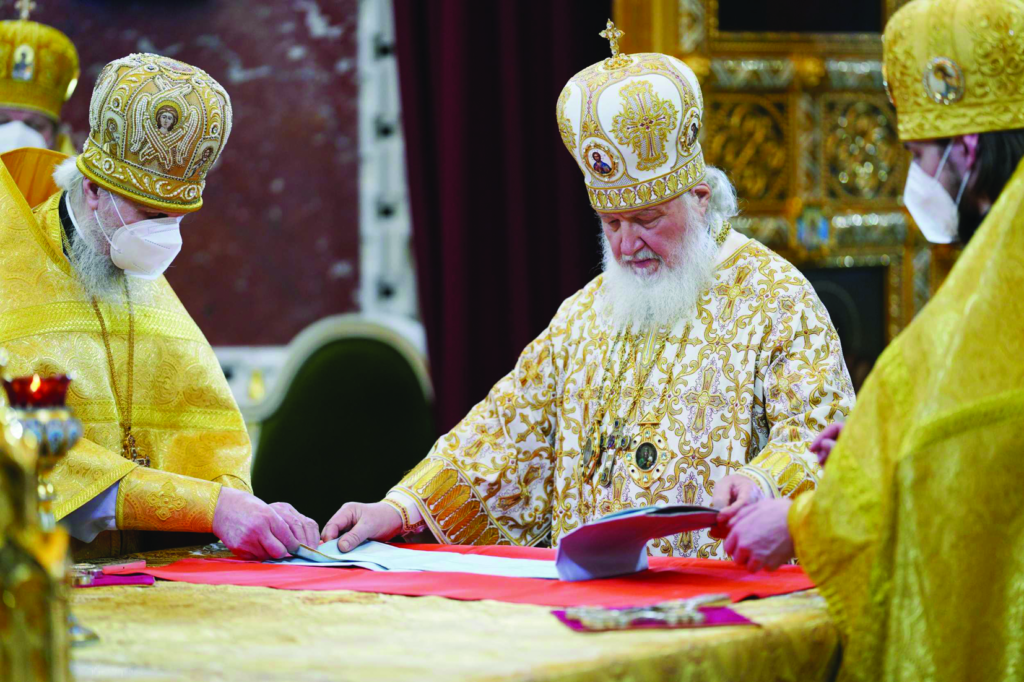 Regardless of what happens in society, the Church must never become a place that is segregated based on vaccination status, the Russian Patriarch told the clergy of Moscow December 21.

The annual diocesan meeting of the clergy of the city of Moscow was held under the chairmanship of Patriarch Kirill yesterday.

Many are concerned about the topic of vaccination and there are strong disagreements about both it in society and in the Church, the Patriarch noted. Speaking for himself, he said: “This is a purely medical issue, a matter of personal choice and responsibility,” reminding the clergy that he has been vaccinated.

The Patriarch was vaccinated in March. Though the Church has never officially revealed which of the Russian vaccines he received, various outlets have reported, with reference to sources close to the Patriarch, that he received either EpiVacCorona or CoviVac.

However, “even if the entire world becomes an arena of segregation on the basis of immunity, the Church must remain free from such segregation and accept all people who are seeking Christ,” he emphasized. (OrthoChristian)

While the Apostle Paul calls us to put off the old and to be renewed in Christ, much in society rather holds up the old, fallen man as an ideal to be emulated, the Russian Patriarch preached on December 26. “This old man is present as an ideal in fiction, and especially in modern cinematography,” the Patriarch said.

It is “offered to us again and again, this idea of the old man, as a living ideal. Most often, it’s from the media and modern culture that we most often encounter the propaganda of this old man,” he added, in his homily at Moscow’s Christ the Savior Cathedral.

The old man is the fallen man, guided by his emotions, passions, and sinful thoughts, the Patriarch explained. Conversely, the call to put off the old man is “a call to spiritual vigilance, to ensure that we don’t let the old man as an ideal into our consciousness, into our heart.” (OrthoChristian) 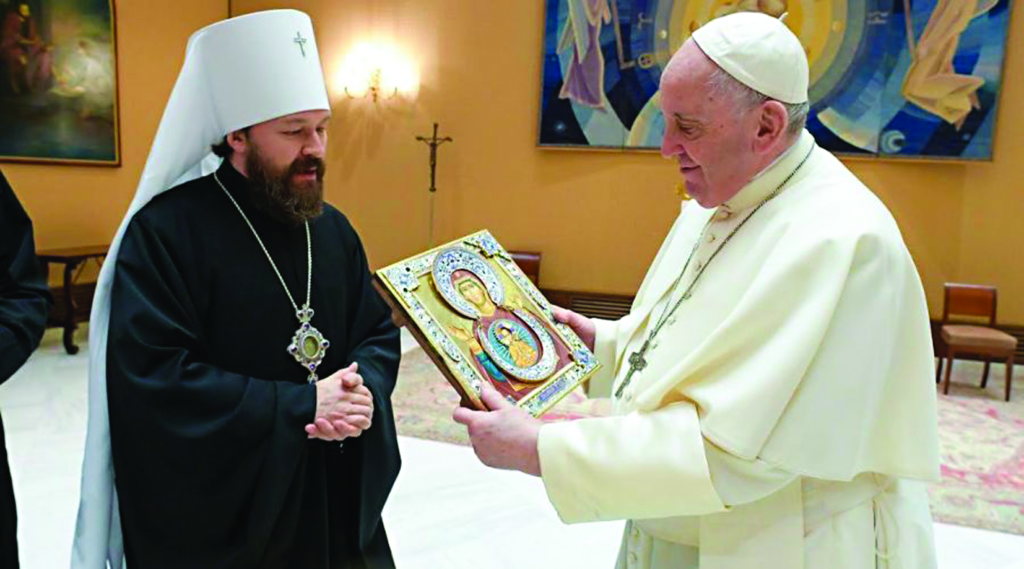 Pope Francis met with Metropolitan Hilarion of Volokolamsk on December 22 amid rising expectations of a second encounter between the Pope and the head of the Russian Orthodox Church in 2022.

The Holy See press office said that the Pope received the chairman of the Department for External Church Relations of the Moscow Patriarchate before his general audience.

The Pope had announced the meeting with Metropolitan Hilarion during his in-flight press conference on his return from Greece on December 6, saying that the bishop was visiting him “to arrange a possible meeting” with Patriarch Kirill of Moscow. (CNA)

On December 29, in the presidential residence of Jerusalem, a traditional reception took place which the Israeli president gave for the heads and representatives of the Christian Churches and communities of the Holy Land before the New Year.

Theophilus III, Patriarch of the Holy City of Jerusalem and All Palestine, spoke on behalf of Christians of the Holy Land and thanked the president of Israel and the minister for internal affairs for their prolific work in supporting the multicultural status of Jerusalem and the country as a whole. He also emphasized the need for additional support from the state in opposing the ultra-right wing religious Jewish communities who violate the rights of Christians and who are trying to destroy the interreligious balance in Jerusalem, and the Patriarch expressed his desire that the time of hope and joy which the feast of Christ’s Nativity brings would become such for the whole world. (Mospat)

The head of the Russian Church’s Kazakhstan Metropolitan District made an emergency appeal January 5 in connection with the current situation in the country.

The President Tokayev of Kazakhstan declared a state of emergency in Almaty, the capital city of Nur-Sultan, and the western province of Mangistau after thousands took to the streets throughout the country, clashing with police and storming the mayor’s office in Almaty. Rallies began several days ago with protestors calling for a cheaper liquefied natural gas. Dozens of rioters have reportedly been killed, and about 1,000 injured.

Metropolitan Alexander of Astana and Kazakhstan called upon the nation:

“The head of state addressed the protesters with a noble proposal to return to the path of trust and dialogue. For the sake of the future of independent Kazakhstan, we must follow this call and stop inciting any conflicts.”

“I appeal to all decision-makers: Stop the hostile confrontation and enter into real negotiations to establish peace and justice. There can be no winners in internecine conflict, there can be no political gains that would be more valuable than people’s lives.” (OrthoChristian).