Metropolitan Hilarion of Volokolamsk meet with the Archbishop of Esztergom and Budapest, Cardinal Peter Erdo

On November 28, 2019, in the parish house at the Assumption Cathedral of Budapest (Hungary), a meeting was held between the chairman of the Department for External Church Relations of the Moscow Patriarchate, Metropolitan Hilarion of Volokolamsk, and Archbishop Cardinal Peter Erdo of Esztergom and Budapest. 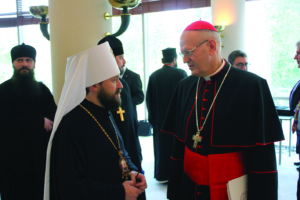 During the meeting, which took place in a warm and cordial atmosphere, a wide range of issues was raised. Metropolitan Hilarion, in particular, shared his impressions of participating in the Second International Conference in defense of persecuted Christians, which was taking place at that time in Budapest. The DECR chairman told the head of the Hungarian Catholics about the development of Church life in Russia, Ukraine and other countries under the canonical responsibility of the Russian Orthodox Church.

An exchange of views took place on the topics of work with young people, social ministry, missionary and educational activities of Christian Churches in the modern world.

At the end of the meeting, Metropolitan Hilarion presented the Cardinal with the publication of his Catechism book in Hungarian.

Then Metropolitan Hilarion and Cardinal Erdo went to the Assumption Cathedral, where the secretary of the Hungarian Diocese of the Moscow Patriarchate, Father Svyatoslav Bulach, acquainted the guests with the progress of restoration work carried out with funds allocated by the Hungarian state. (mospat.ru)

From October 27 to November 3, 2019, in the format of the working group “Churches in Europe” in Germany, a series of youth theological meetings took place, in which students from Russia took part. They visited the leading universities in Germany, on the site of which working meetings were held with representatives of the Catholic and Lutheran churches, and state and municipal educational authorities. 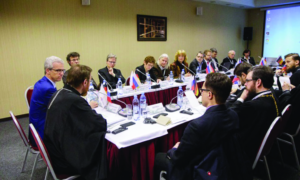 The topic of the meetings was “Teaching Religion in German Schools.” Students of the General Church Graduate and Doctoral School named after Saints Cyril and Methodius, Moscow, St. Petersburg andYekaterinburg Theological Seminaries, and the Orthodox St. Tikhon Humanitarian University, got acquainted with the educational activities of the theological faculties of the universities of Munich, Erlangen and Berlin. Dr. Johannes Elderman, Executive Representative of the Petersburg Dialogue Forum, acted as the official representative of the host country. The head of the group of students from Russia is Deacon German Demidov, head of the Fundamentals of the Orthodox Culture of the Russian Orthodox Church sector. (mospat.ru)

A group of scientists announced on December 8 in Thessaloniki that they had discovered bones “most certainly” belonging to a woman who was buried centuries ago at the cemetery of Pantokratoros Monastery on Mount Athos.

The Greek “Holy Mountain” with its nearly 1,800-year continuous Christian presence is home to 20 monasteries where only men are allowed to visit. The bones were discovered during restoration work being done on the floor of the chapel of St. Athanasios of Athonitis, where all burial ceremonies of laymen connected with the monastery have taken place.

Restorer Phedon Hatziantoniou, who led the team of experts, speculated that the bones might possibly belong to a woman called Stasha, the wife of a 16th-century landlord called Barboul or Barbouli who lived at the monastery with his sons.

The remains have been sent to specialized laboratories in Athens for further examination.

“As far as I know, this is the first case that bones belonging to a woman have been discovered on Mt. Athos,” Hatziantoniou said in an interview with Greek daily newspaper To Ethnos.

“It is well known that in the past, when there were invasions or revolutions, the monks opened their border and their monasteries to protect the local population,” he explained.

The scientists have also discovered fragments of bones belonging to men in their research. They say that these were probably workers and support staff, since monks have their own ossuary inside the monastery’s main building. (Greek Reporter)

“In the past month, we took note of the willingness of the holy brother hierarchs to recognize the Tomos of Autocephaly granted by His All-Holiness Ecumenical Patriarch to the Autocephalous Church of Ukraine.

“As is well known, our Holy Catholic Orthodox Church is governed under the synodical system, as inherited by the Tradition and the Holy Ecumenical Councils. To this end, the Primates of the local ecclesial synods are one of their members.

“Consequently, we, as a constituent and effective principle of the willingness of the holy brother Hierarchs, commemorated and included in the diptychs of the Catholic Orthodox Church, the Primate of Autocephalous Church of Ukraine, His Beatitude Metropolitan Epifaniy of Kyiv and All Ukraine, while wholeheartedly praying for peace and stability of our Orthodox Churches.” 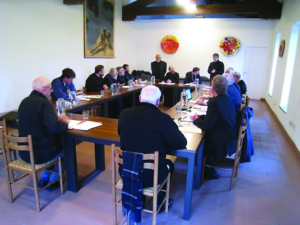 Benefiting once again from the warm and generous hospitality of the brothers and sisters of the Monastic Community of Bose, the Coordinating Committee of the Joint International Commission for Theological Dialogue between the Roman Catholic Church and the Orthodox Church, under the co-presidency of Cardinal Kurt Koch, president of the Pontifical Council for promoting Christian Unity, and Archbishop Job of Telmessos, permanent representative of the Ecumenical Patriarchate of Constantinople to the World Council of Churches, met from 11 to 15 November 2019 at the Monastery of Bose (Italy). The Committee examined a revised draft text entitled, “Primacy and Synodality in the Second Millennium and Today.” It is envisaged that a further meeting of the Coordinating Committee will be held in 2020. (Ecupatria)

An earthquake measuring 6 on the Richter scale shook much of southern Greece on the morning of November 26, a day after a particularly destructive quake was recorded in coastal central Albania. Many residents in the greater Athens area felt the tremor, whose center was pinpointed between the large island of Crete and the island of Kythira.

In Albania, a national day of mourning was declared, as emergency crews frantically worked around the clock to search for survivors in the rubble. The earthquake in central Albania has so far resulted in at least 30 deaths, with injury to more than 700 people and widespread devastation.

From the first moment news of the quake was received, the Autocephalous Orthodox Church of Albania and the Archbishop of Tirana and All Albania, Anastasios, were at the side of those affected by the natural disaster. Cathedrals were opened to host people whose homes were destroyed and damaged, while all of the Church’s charity structures were activated to provide any and all possible relief.

Messages of solidarity quickly reached the country from the Patriarchates of Romania and Bulgaria.

Anastasios received Greek Foreign Minister Nikos Dendias at the Archdiocese in Tirana, as the latter traveled to Albania immediately after the quake in order to coordinate how Athens could aid in efforts to support the quake-stricken.

Anastasios thanked the minister on behalf of the Church for the support provided by the Greek state. (Orthodoxia News Agency) 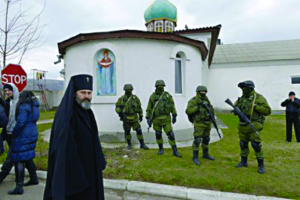 A Russian-controlled court in annexed Crimea has ordered the Orthodox Church of Ukraine (OCU) to demolish its chapel in Yevpatoria.

The decision can be appealed within a month.

The Russian administration had been trying to vacate the territory on which the place of worship stands over allegations that the OCU didn’t have the proper building permits from when construction began in 2014.

Metropolitan Epifaniy, the head of the recently-formed, independent OCU, said on Facebook that the court decision “grossly violates one of the fundamental human rights: freedom of conscience and religion.”

When Russia sent in masked soldiers without military insignia to take over Ukraine’s Crimean Peninsula in early 2014, there were 46 parishes affiliated with the Kyiv Patriarchate of the Orthodox Church.

After the first year of annexation, eight OCU parishes remained in Crimea.

“All faiths, except the Orthodox Church under the Moscow Patriarchate, have come under fire in occupied Crimea,” the Kharkiv Human Rights Protection Group said in September regarding the clampdown on the peninsula.

The last major OCU congregation was evicted from its church in September by court order in the peninsula’s capital of Simferopol.

The same month, the Russian Justice Ministry in Crimea for the third time since 2014 denied registration to the OCU on the peninsula.

In October 2018, Ukraine secured approval from Ecumenical Patriarch Bartholomew of Constantinople — the spiritual head of Orthodoxy — to set up an independent Orthodox church.

Moscow long opposed such efforts by the Ukrainians for an independent church, which intensified after Russia annexed Crimea and threw support to separatists in parts of Ukraine’s eastern regions of Donetsk and Luhansk. (Radio Free Europe)