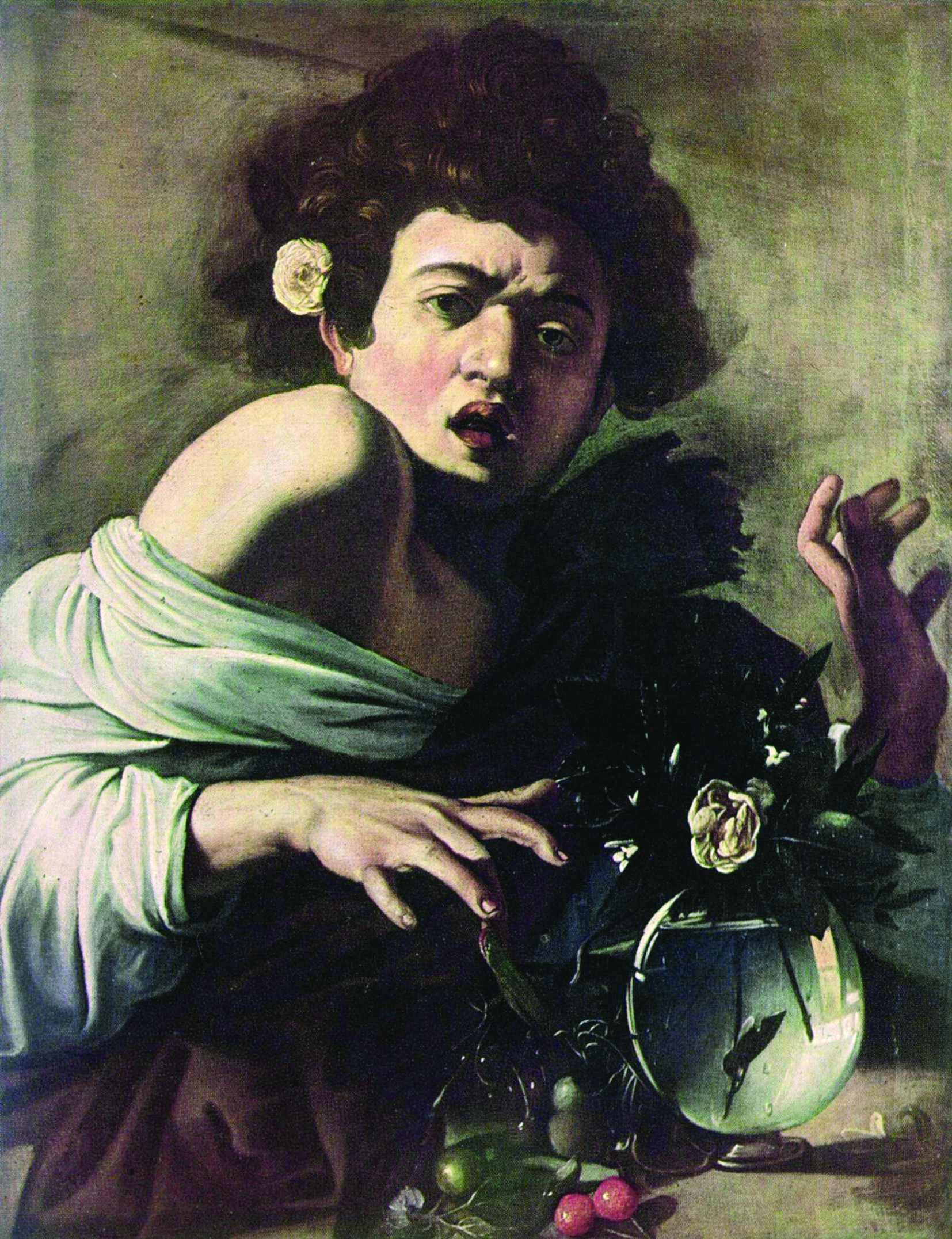 Boy Bitten by a Lizard by Caravaggio.

Prolonged through January 10, 2021 at Rome’s Capitoline Museums, is the temporary exhibition, Il Tempo di Caravaggio: Capolavori della collezione di Roberto Longhi, or The Times of Caravaggio: Masterpieces from the Art Collection of Roberto Longhi. I’ve already written three articles for ITV about Caravaggio, this hottempered, violent genius, born near Milan, who lived in Rome on and off from 1593-1606 before having to flee from justice and spend the last four years of his life on the run. My articles were: “The Genius of Caravaggio: The Father of Modern Painting” (April 2010), “Rome at the Time of Caravaggio” (January 2012), and “He was Sentenced to Death So Caravaggio Escaped…to Naples” (February 2020). The first concerned a monographic, blockbuster exhibition, the first since World War II, held at the Quirinal’s Scuderie to mark the 400th anniversary of Caravaggio death in 1610; the second, another blockbuster, held at Palazzo Venezia, covered the many artists from all over Europe who were painting in Rome during Caravaggio’s sojourn and soon thereafter; and the third at the Palazzo Pretorio in the off-the-beaten-track town of Prato in Tuscany: “After Caravaggio: 17th-Century Neapolitan Art Exhibition in Prato.” As I wrote: “This title clearly states the exhibition is not about Caravaggio, but about the painters, his contempor aries and others of the next two generations, who lived in Naples, studied his Nea politan, and sometimes Roman works, and were deeply influenced by his style and subject matter.”

Instead, this current exhibition is dedicated to Caravaggio, the painters who influenced his work, and those in Rome and later in Naples whom his works influenced. The works, 45 paintings and a charcoal drawing, are all on loan from the Roberto Longhi Foundation in Florence to commemorate the 50th anniversary of this great art historian/collector’s death on June 3, 1970. The painters collected by Longhi included the Neapolitan Giovanni Battista Caracciolo, nicknamed “Battistello”; the Spaniard Jusepe De Ribera; the probably Neapolitan “Master of the Anunciation to the Shepherds”; and the Calabrian Mattia Preti, considered the last of Caravaggio’s followers, all known as “Caravaggeschi.” 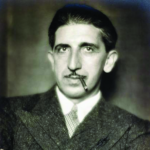 Born on December 28, 1890 in Alba (in Piemonte) to parents of Emilian origin, both of whom were teachers, Roberto Longhi from an early age loved painting, particularly two works: Barnaba da Modena’s Madonna in his parish church, and Mattia Preti’s Concertino in Alba’s town hall. Beginning with his thesis at the University of Turin (1911), however, his research and writings focused on Caravaggio after a trip to Rome a year earlier. As the exhibition’s first wall panel tells us: “The choice was a ground-breaking insight for the time, since Caravaggio was one of the ‘least known of Italian artists’… Nonetheless, pioneer Longhi immediately understood the revolutionary impact of Caravaggio’s painting and considered him to be the ‘night porter’ or last great Renaissance artist and the first modern painter.”

In 1912, Longhi moved to Rome for his doctorate and a high school teaching job and wrote for the magazine L’Arte. That same year his career took off when he contacted the Lithuanian-born naturalized American art historian Bernard Berenson, offering to translate into Italian his book Italian Painters of the Renaissance, and they became lifelong friends.

Over the years, besides L’Arte, Longhi wrote for Vita Artistica and in 1950 founded Paragone. He was also a professor of art history at the University of Bologna, where he taught the poet Attilio Bertolucci, the father of film directors Bernardo and Giuseppe, as well as the poet, writer, and film director Pier Paolo Pasolini (for, besides painting, Longhi loved the theater, cinema, and literature), and later at the University of Florence, where the Tuscan writer, art critic, and feminist Carla Lonzi was one of his students.

Longhi’s lifetime ambition was the artistic re-evaluation of long-neglected and often-disparaged Caravaggio and his importance to 17th-century Baroque painting. 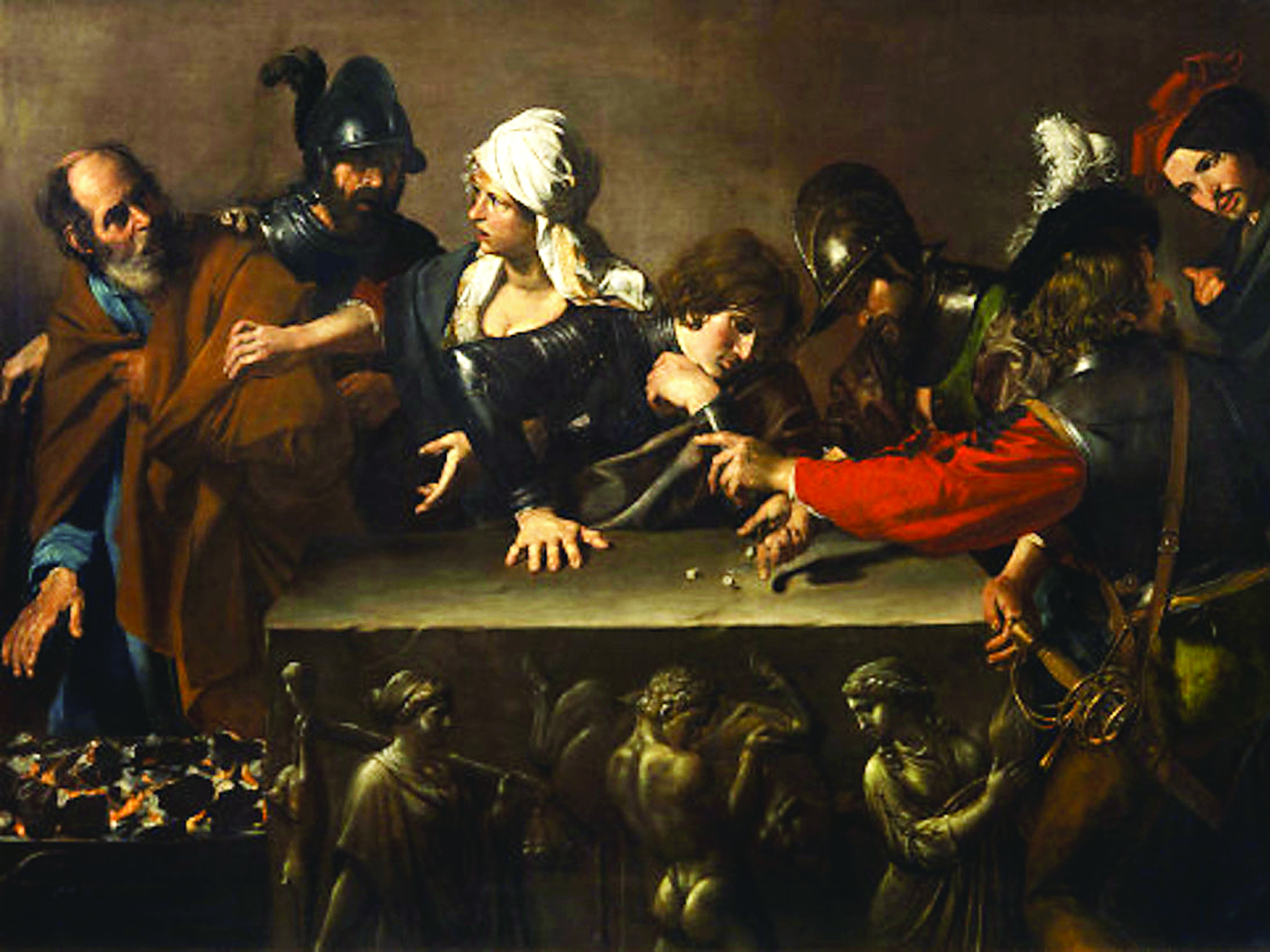 The Denial of Peter by Valentin de Boulogne

He reached his goal by curating two mega-exhibitions in Milan: Caravaggio e i caravaggeschi in 1951, and I pittori della realtà in Lombardia in 1953. Besides Caravaggio, Longhi also put Piero della Francesca on the world map. Among the other artists he wrote about were: Cimabue, Masolino, Massaccio, Correggio, Carpaccio, Artemisia Gentileschi, the Futurists, the Roman School, and Giorgio Morandi.

Not only was Longhi the most prominent Italian art historian of his time, but, like his friend Berenson, he was also an important collector. In 1924, he’d married his student, Lucia Lopresti, who, using the pseudonym Anna Banti, wrote prolifically: historical novels including a “biography” of Artemisia, short stories, and essays, as well as translations of French, British, and American literature. In 1939 they settled in Florence and bought their historically important home, parts of which date to the Renaissance, Villa Il Tasso, also known as “Villa Ficalbo” at Via Benedetto Fortini 30, in the Gavinana neighborhood of Florence.

Longhi collected a considerable number of artworks by masters of all artistic periods, from the 13th to the 20th century, and Villa Il Tasso offered him a peaceful refuge for his research. The core of his collection includes a work or maybe two by Caravaggio and many by Caravaggio’s inspirers and followers.

Here the Fondazione di Studi di Storia dell’Arte Roberto Longhi was founded in 1971 by Longhi’s last will and testament. Having no children, he left his art collection and his libraries of books and photographs “to the benefit of future generations.” Since 1971 up to now the Foundation has awarded grants to over 400 young scholars from all over the world for a year of study in Florence to carry out their own personal project in the field of art history. At her death in 1985, his widow left the Villa itself and all its furnishings to the Foundation.

The Times of Caravaggio opens with four small panels by Venetian Lorenzo Lotto who inspired Caravaggio’s interest in bright light, and Bolognese Bartolomeo Passarotti’s canvas of a market scene, which possibly triggered his obsession for still lifes and portraits of “low-class” people. Of particular interest in this first of five rooms is Longhi’s canvas A Boy Peeling Fruit. There are three other copies of this early work all dating to 1592-93, all believed by many scholars including Longhi, who included it in the 1951 exhibition, to be Caravaggio’s earliest work painted upon his arrival in Rome. Besides Longhi’s, one version is at Hampton Court, another in London’s Dickinson Group and the fourth in a private collection in Switzerland. Later, however, Longhi came to understand that all four are copies of a lost original. Nonetheless, originals or copies, from this work we can date Caravaggio’s arrival in Rome. 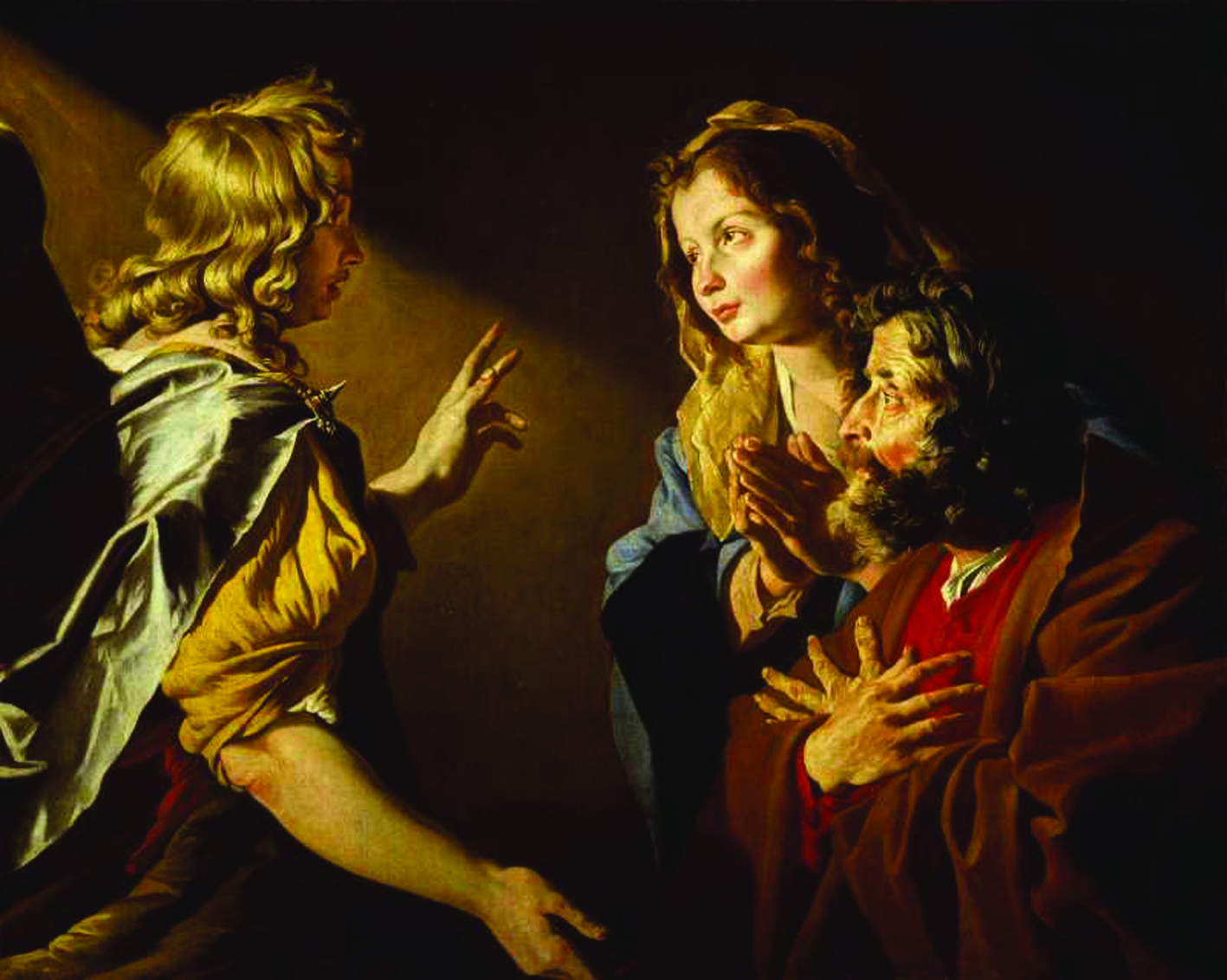 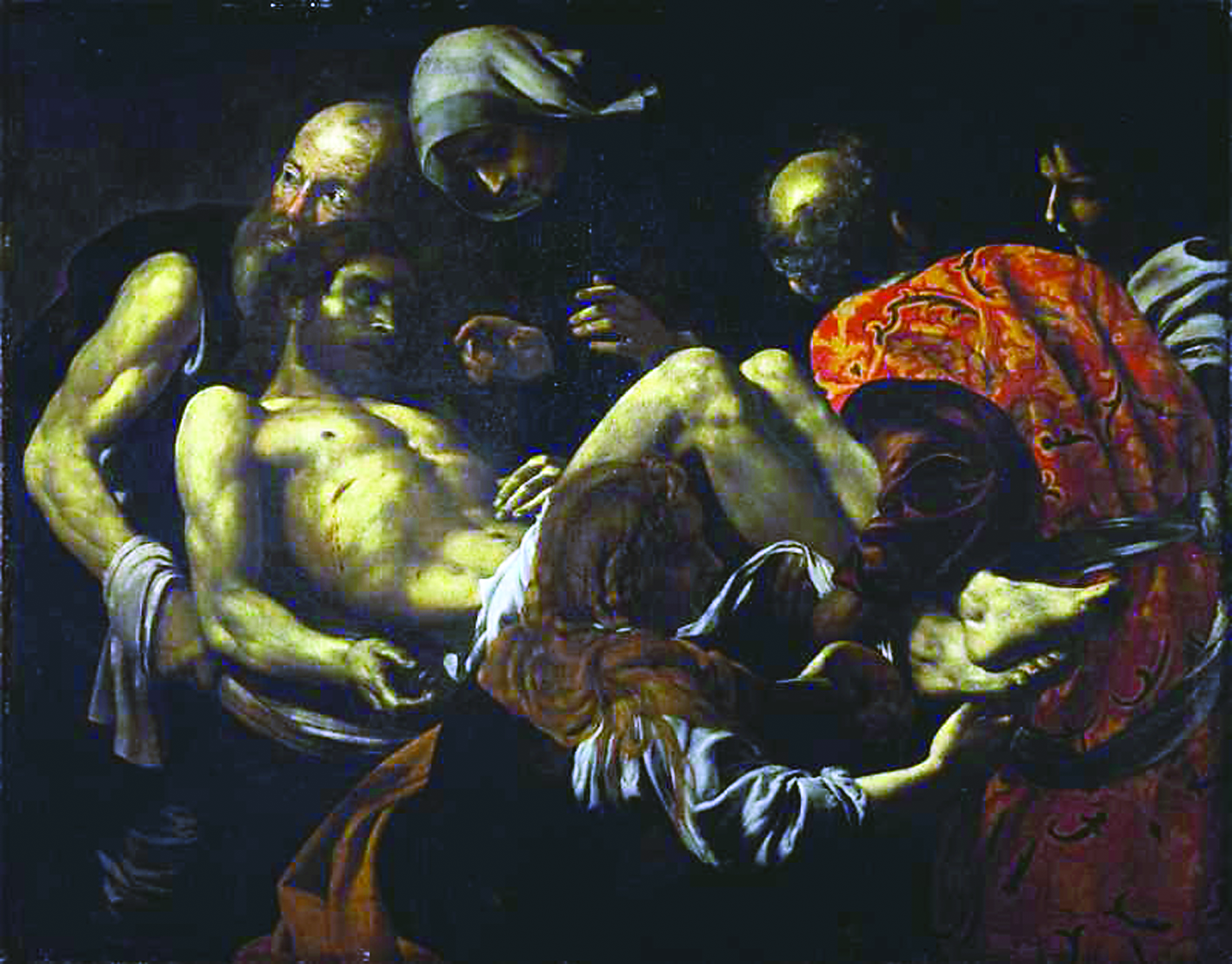 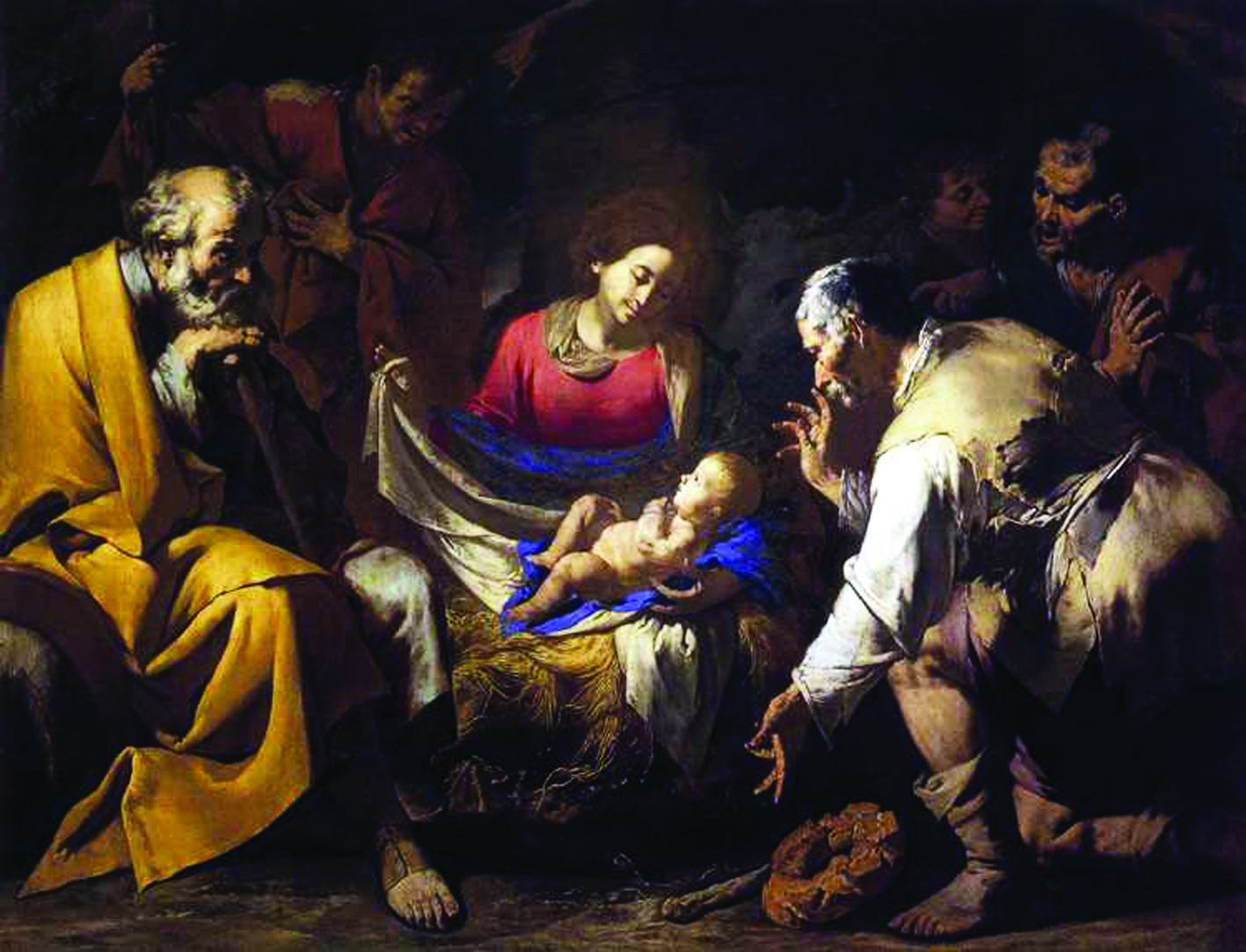 Adoration of the Shepherds by Maestro dell’Annuncio ai Pastori