In a recent blog post, Fr. Nicanor Austriaco, O.P., S.T.D, Ph.D., said he sees reason to hope that the drug hydroxychloroquine could be used to treat the coronavirus, or COVID-19.

Austriaco is a professor of biology and theology at Providence College in Providence, Rhode Island. He is currently on lockdown in the Philippines with his mother during the coronavirus pandemic.

“As a molecular biologist, what is so exciting for me about this claim is that the clinical trial in France was pretty good, given the extreme circumstances,” Austriaco wrote.

“Yes, it was a small trial, but if you read the paper, it was rigorous for what it wanted to do, which is to be a pilot study. And it showed that HCQ significantly shortened the time for the patient to clear (the) virus from his or her system.” (CNA)

The former head of the U.S. Catholic bishops’ conference and archbishop emeritus of Cincinnati, Daniel E. Pilarczyk, died March 22 at the age of 85.

A statement from the Archdiocese of Cincinnati said that Pilarczyk died “peacefully,” but did not offer further details. Public funerals are currently suspended in the archdiocese because of the coronavirus outbreak.

Archbishop José Gomez of Los Angeles, president of the U.S. Catholic bishops’ conference, led tributes to the archbishop on March 22.

“He was known as a shepherd close to his flock. The Archbishop led during challenging times but sought reconciliation and reform with humility,” Gomez said of Pilarczyk. (CNA)

The lieutenant governor of Washington State announced March 19 that he will not seek re-election and instead will enter the Society of Jesus this autumn.

Lt. Gov. Cyrus Habib (D), 38, will end his eight-year career in public office after what he described as “two years of careful and prayerful discernment” led him to apply to join the Jesuits. Habib, who was elected lieutenant governor in 2016, is the highest-ranking Iranian-American elected official in the United States.

As his discernment process was “almost entirely private,” Habib said that he expected many of his constituents and supporters would find his decision to be a “major surprise,” particularly because he was considered by many to have a bright political future. (CNA)

The principal and a security guard at Bethlehem Girls’ High School in Lagos died March 15 while helping students escape a burning building following the explosion of a gas pipeline.

At least 17 people died as a result of the March 15 explosion, which occurred after a truck hit stacked gas bottles at a processing plant near a pipeline.

“Sr. Henrietta Alokha SSH and other staff that died have paid the supreme price in their bid to lead all her students to safety. May their souls rest in peace,” Archbishop Alfred Martins of Lagos said March 16.

Sr. Henrietta reportedly rescued the students trapped in a building at the school before the roof caved in. They were attending Mass at the time, and Archbishop Martins said the priest who was saying the Mass “helped in rescuing the students and he himself is safe.”

Some of the students are in hospital, while the others have been released to their parents.

“We want to state that all students of the school were reported safe,” the archbishop added. More than 250 girls attend the school. (CNA)

A researcher from the United States Holocaust Memorial Museum told CNA that she hopes the recent opening of the Pius XII archives in the Vatican will give historians a fuller, more transparent image of the wartime pope.

Dr. Suzanne Brown-Fleming, the museum’s director of international academic programs, has been unable to travel to Rome to view the archives due to the COVID-19 outbreak.

The Vatican officially opened the archives, which cover Venerable Pius XII’s entire pontificate —  arch 1939 through October 1958 — on March 2. It is the first time scholars have been granted access to the approximately 16 million documents they contain. (CNA)

“Somebody is Killed Every Day”: Bishop Pleads for Christians to Remember Ukraine

A Ukrainian Catholic bishop has urged Christians not to forget their suffering brethren in Ukraine. With global attention focused on the coronavirus outbreak, Bishop Stepan Sus said Christians in Ukraine are still enduring a years-long war with no end in sight.

“Very often Ukraine is presented to the world as a country which lives in corruption, but nobody is speaking about our suffering, our wounds,” said Bishop Sus, a curial bishop of the Ukranian Greek-Catholic Church’s Major Archeparchy of Kyiv-Haly to CNA.

“Somebody is killed every day” in the conflict, he said, and war has displaced more than 2 million people in east Ukraine.

Kent Hill, co-founder and senior fellow for Eurasia, Middle East, and Islam at the Religious Freedom Institute, told CNA in a joint interview with the bishop, “With the coronavirus, it’s very easy for the West, even committed Christians, to lose interest or knowledge about what’s going on there [in Ukraine]. And that’s very dangerous for the Christians there,” he said.

“Once it becomes obvious to the Russians that nobody’s paying attention, they have a freer hand.” (CNA)

Pope St. John Paul II embraced suffering with love, even during his illness, a cardinal and the archpriest of St. Peter’s Basilica said on the 15th anniversary of the saint’s death.

The spread of the coronavirus pandemic, and the growing number of infected and dying people “has fallen on an unprepared society, highlighting the spiritual emptiness of many people,” Cardinal Angelo Comastri told Vatican News April 1.

“Pain undoubtedly frightens everyone,” he stated. “But when it is enlightened by faith it becomes a way to cut back selfishness, banalities and frivolities.”

Pope St. John Paul II died at the Vatican on April 2, 2005, 15 years ago, after months of illness and a years-long battle with Parkinson’s disease. Comastri recalled one of the Pope’s final “appearances” before his death, when, unable to attend, he watched the Good Friday Stations of the Cross at the Colosseum via video from his private chapel.

“The image we saw on television is unforgettable,” Comastri said. “The Pope, who had lost all his physical strength, holding the crucifix in his hands, gazing at it with pure love. One could sense he was saying: ‘Jesus, I too am on the Cross like you. But together with you I await the Resurrection.’” (CNA) 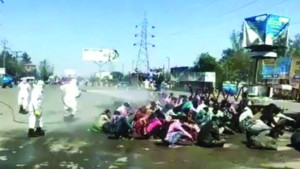 A bishop in India has condemned the spraying of migrant workers and their children with disinfectant, after a video posted to Twitter showed public health authorities doing exactly that.

The video was posted to Twitter March 29. The Times of India reported that families at a bus stand in the northern Indian city of Bareilly were told to sit on the ground, and were then sprayed with a bleaching agent mixed with water.

In the video, parents and their children sit on the streets of Bareilly and are showered with a chemical solution of chlorine mixed with water. Men in hazmat suits can be heard telling the migrants to close their eyes and mouths.

“This is inhumane, because these people are poor and marginalized and desperate migrant laborers and their families. Their dignity cannot be violated in this inhuman and shocking manner,” the bishop said, according to Asia News. (CNA) 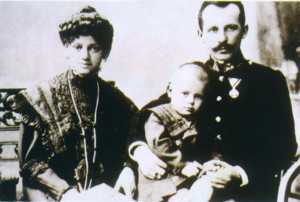 Archbishop Marek Jędraszewski of Krakow announced that having obtained the approval of the Congregation for the Causes of Saints, the archdiocese has opened beatification processes for the parents of Saint John Paul II.

Edicts signed by Archbishop Jędraszewski opening the cause bear the date March 2.

The faithful are being asked to provide the Krakow curia with any documents, letters, or messages regarding Karol and Emilia by May 7.

The Polish bishops gave a positive opinion on the opening of the cause in October 2019. (CNA)