Background of an Election

Background of an Election 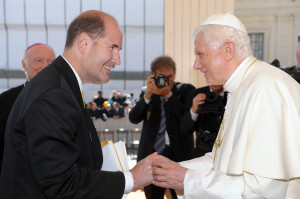 In July 2013, Michael Hesemann’s book Papst Franz­iskus: Das Vermächtnis Benedikts XVI. und die Zukunft der Kirche (“Pope Francis: The Heritage of Benedict XVI and the Future of the Church”) appeared in Germany. Hesemann, a German historian and writer, based his book on conversations with Pope Benedict’s brother, Msgr. Georg Ratzinger, and with Maria Bergoglio, the new Pope’s sister, to better understand the figure of the first non-European Pope. He also reconstructed the background of the historic events of February and March 2013.

You are perhaps the first writer who has carried out a series of book-interviews with papal siblings. Where did the idea to do that come from?

Michael Hesemann: Well, that’s true. And I really wonder why nobody had the idea before. I read wonderful remarks by Msgr. Georg Ratzinger in German newspapers; I saw him on TV and really got the idea that he must be a great narrator. Still, when I was commissioned to write the first German-language biography on Pope Benedict for young readers, scheduled for World Youth Day in Cologne in 2006, time was just too short for a detailed interview with Georg Ratzinger. Also, I thought that someone else would certainly do this, since he [Msgr. Georg] is well-known in Regensburg, being the conductor of the famous Reg­ensburger Domspatzen (Cathedral Boys’ Choir) and certainly a part of the local history. And who would know the Pope better than his elder brother who witnessed all important moments of his life? 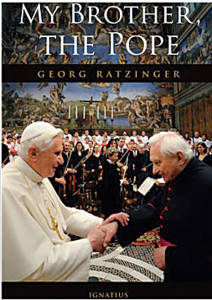 The cover of the book My Brother, the Pope by Michael Hesemann.

But year after year passed and nothing was published. Then I joined the German initiative “Germany pro Papa,” defending Pope Benedict, and one day, after a lecture I gave at the famous Weltenburg monastery near Regensburg, I was asked by a member if I would like to join her. She had an afternoon “coffee and cake” invitation from the Pope’s brother. Sure, I said, and I went.

When I met Georg Ratzinger, from the very first moment I liked him a lot. He was like the loveable, warmhearted grandfather all of us would like to have. Such a kind man! And indeed a wonderful narrator with a great sense of humor. So I frankly asked him if he could imagine being interviewed by me for a small book. He promised to think about it, consulted his brother and eventually agreed. So My Brother The Pope was born, a book published in 14 languages with an overall print run of several hundred thousand copies. And indeed we developed a friendly relationship. I visit him regularly and keep him informed about a lot of things.

When Pope Benedict resigned, of course he was the first person I asked for the true reasons. My interview with him is part of the book.

Then Pope Francis was elected. He had four siblings, although only one of them is still alive, his younger sister Maria Elena. Remember, when he appeared on the balcony, we were all surprised. Nobody had expected him, nobody knew anything about him. Several authors tried to write biographies in just a few days, and most of them are full of mistakes. I hate that kind of book — I consider them cheap. When a publisher invited me to write on both the resignation of Pope Benedict and the new Pope, Francis, I agreed, under the condition that I would have at least a few weeks’ time for careful research. I had to travel to Argentina, both to understand the world and culture he came from and to interview people close to him. And my “primary target,” of course, was Maria Elena Bergoglio, who was kind enough to grant me a two-hour interview. 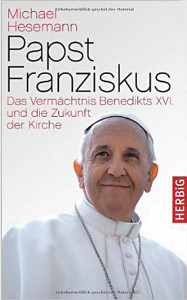 Your recent book is about Benedict’s resignation and Francis’ election. What can the reader learn from it?

Hesemann: I frankly claim that the reader of my book will understand the true reasons for Pope Benedict’s resignation from the papacy. So many authors tried to slam his pontificate and so few really understood and appreciated Benedict XVI’s role as a great teacher and reformer of the Church who now, in many instances, is a kind of role model for Pope Francis; certainly not in superficial questions of style and fashion, but definitely in his theology, in his understanding of the Church and its role in our millennium. Furthermore, the reader will understand Pope Francis much better as to who he really is, not who the media and the liberal Catholics want us to believe.

Indeed, Pope Francis even now remains a bit of a mystery to the world. What have you learned about him from the interview with his sister?

Hesemann: Do you know what impressed me most about his sister? Her love and respect for Pope Benedict! In an earlier interview she was asked whether she had ever spoken to “the other Pope’s sibling,” Georg Ratzinger, and she said no, but that she would love to. So when I visited her, I offered to call him from my cellphone, but she was afraid she would not know what to say, since she speaks neither English nor German. Instead, she asked if she could write him a letter and I promised to translate and hand-deliver it to him, which I did a few weeks later. Of course, I asked her afterwards what she wanted to tell him. And when she answered, I nearly had tears in my eyes. She really is a wonderful, warm-hearted woman and she frankly told me how grateful she was for this great Pope (Benedict) who was misunderstood by so many, and how much she loved and admired him. She confirmed this for her brother, too, and indeed a few weeks later, in a private telephone call, Pope Francis told a friend how much he appreciated Benedict’s presence and advice. “The Encyclical of the Four Hands” is good evidence of this, but also the frequent visits of Pope Francis to the Mater Ecclesia monastery just for lunch and chat.

So we should not get misled by formalities or his black shoes. He does not change the papal style and residence to distance himself from his successor, he just does not feel comfortable with them. Keep in mind, he’s not only a Jesuit, and Jesuits are known for their simple, humble lifestyle, but also from South America, a culture with a deep-rooted aversion against monarchy in general, since the Spanish monarchy suppressed and exploited all the New World. Those nations cultivated a strong republican, egalitarian spirit, and that’s why Pope Francis just can’t live in a palace and wear shoes in the color of the Roman and Byzantine emperors. He understands that Benedict accepted all this in deep humility, but he wouldn’t feel at ease in it.

Indeed, the real difference between both Popes is that the one is a great theologian, who, I am sure, will one day be called a Doctor of the Church, while the other is a pastor. Francis is the “parish priest” of the world, and that’s how he preaches: less elegant, certainly on a different doctrinal level, but reaching the hearts of the people. Pope Benedict’s role was to define the faith and doctrine of the third millennium; Pope Francis goes out to win hearts for it. And yes, since he’s a pastor and not a theologian, he does not want to set up hurdles, but invites the masses into his Church, entrusting even lost souls to the Divine Mercy. And indeed he’s a genius in public relations, in creating good news and using gestures the public understands. So in this role, as a “fisher of men,” he is a blessing for the Church, since he wins the masses, even if many, and especially the intellectuals, miss Benedict XVI and the brilliance and beauty of his homilies and writings. But we need Popes with different charisms. Pope Benedict, thank God, never even tried to be a John Paul II “2.0,” but stayed the introverted, shy intellectual most of the time, dedicated to truth and beauty and creating brilliance. It was a great pontificate and we are all so blessed that we witnessed it in our lifetimes.

But now it’s time for mission, to reach out, to bring the Gospel where nobody expects it any longer, to the darkest corners of our world. The Church of Pope Francis is a missionary Church — no wonder, with a Pope from a land of missions, Argentina, and a missionary order, the Jesuits. And this is wonderful, too, since the rich teachings of our faith, including the rich theology of Pope Benedict, should not be hoarded like a treasure and protected from the unworthy world of sinners, but belongs to those in need of the light of truth.

Christ was the first who sent his followers out, from the cozy closeness of their original community, into the cities and countries of a hostile, pagan world: “Go therefore and make disciples of all nations!” (Mt 28:19) And to follow his will, he might have sent us the Pope of Outreaching, a new missionary Pope, who is understood by everybody in his purity and simplicity, a St. Francis of our times.