Francis, a Name the Pope Did not Choose by Chance

Francis, a Name the Pope Did not Choose by Chance

For the first time, a Pope has chosen to be named after St. Francis of Assisi. A Pope’s choice of name usually has a precise motivation; in fact, behind every name there is a message. So, what is the message conveyed by the name Francis?

Father Ugo Sartorio: The desire for a renewed Church, able to change, to renew her devotion to Christ and service to man. A Church centered on conversion, on sinners, and on the poor: that is what Pope Francis means when he draws attention to the concept of mercy. The bishop of Rome, as the new Pope refers to himself, is establishing a new style, slowly but surely; it is a style of his own which all can recognize, believers and non-believers, learned and unlearned alike. A Jesuit Pope called Francis is aware of the revolutionary impact of his choice and the expectations it raises.

What do the Pope and St. Francis of Assisi have in common?

Sartorio: St. Francis was a poet and a man in love with God. Listening to Pope Francis, one is struck by the sweetness of his words and the great love of God that his speeches transmit. Yet, the question is which St. Francis he will draw inspiration from.

John Paul II presented St. Francis as a symbol of universal brotherhood, the man of interreligious dialogue; his decision to make Assisi the epicenter of prayer for peace is one of the greatest legacies of his resourceful teaching.

Benedict XVI, on the other hand, saw Assisi as a place calling for man’s conversion to God, a troubled, but exciting journey which Francis, the son of Pietro di Bernardone, made to the end. Religions too need to convert, to center on God again, and above all to acknowledge and announce Him as the ultimate source of our peace.

In all likelihood Pope Francis, though confirming the choice of ecumenism and interreligious dialogue and perceiving the great evangelical radicalism of St. Francis, will focus on his preference for the poor and poverty, stressing the fact that poverty, in the Franciscan sense, is not just solidarity with a given social class or protest against a social system or even a form of asceticism, but first and foremost a way of following Christ.

In the Upper Church of Assisi there are wonderful frescoes by Giotto on St. Francis’ life. Two of these frescoes show two Popes: the first, Innocent III as he dreams of the saint holding up the Basilica of St. John Lateran; the second, St. Francis preaching a sermon to Honorious III. This points to Francis’ role in the history of the papacy. How could he reform the Church without prompting a schism, as other reformers had done? 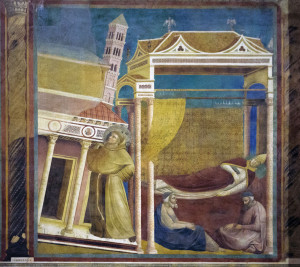 Sartorio: Giotto’s frescoes, in short, say everything. In Innocent III’s dream, St. Francis is portrayed as a support of a shaky Church. Notice, however, that while holding up the Basilica of St. John Lateran as a giant of the Christian faith, the saint stays within the perimeter of the basilica. He brought about a renewal, but stayed within the Church, a Church he loved despite her fragility and unfaithfulness. The Pope, or rather His Lordship the Pope, as Francis referred to him, was the ultimate authority, commanding unconditional respect and obedience.

The figure of St. Francis is used in circles either unrelated to the Church or overtly anticlerical (Freemasons, radicals and Communists) which regard him as a symbol of a Christianity without a Church. A book has recently been published in Italy telling the fictional tale of a Pope called Francis who abolishes the Vatican. Why does St. Francis lend himself to such manipulations?

Sartorio: St. Francis has repeatedly been used and portrayed in many ways as a forerunner of pacifism, environmentalism, and an opponent of the ecclesiastical institution; sometimes innuendoes have been made about his close link with St. Clare. It is no mere chance that he is among the few Catholic saints enjoying a good reputation in the Protestant world thanks to his supposed hostility to the Church of Rome. But, as we well know, the truth is different. A man living in the Middle Ages could not be “environment friendly”; nature was at the time seen as hostile to man, so the extensive deforestations conducted in 12th century Europe to obtain tillable land were perceived as heroic deeds. St. Francis never exalted the world as “nature,” a word which never occurs in his writings, but as the work of God’s love, created in His image.

Sartorio: The Pope is going on pilgrimage to Assisi on October 4, St. Francis’ feast day. The news was given in official form by Archbishop of Assisi Domenico Sorrentino on May 22. The announcement was accompanied by the pealing of the bells in St. Francis’ Basilica. Archbishop Sorrentino revealed that the Holy Father has never been to Assisi and that he asked him to organize a comprehensive visit to enable him to walk in the saint’s footsteps, to make the spiritual journey of his conversion. To Sorrentino, the news of the Pope’s visit came as a joy and grace, all the greater since this will coincide with the diocesan synod.