Francis supports liturgies but insists on need to maintain unity

Francis supports liturgies but insists on need to maintain unity

In a continuing effort to resolve tensions between the Neocatechumenal Way and local parishes with regard to certain liturgical matters, the Vatican Secretariat of State on April 3 sent a letter from the Holy Father to Kiko Argüello, initiator of the Neocatechumenal Way, along with Carmen Hernandez, to confirm the liturgies of the Way, especially with regard to the Paschal Vigil, but to insist that maintaining unity was of very great importance. 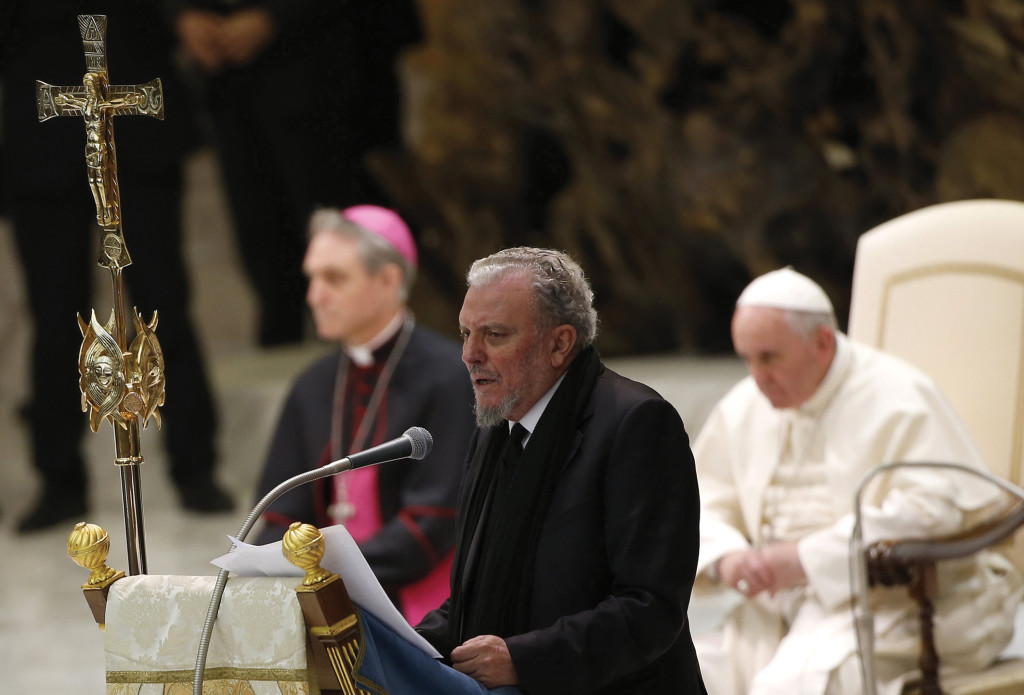 Pope Francis listens as Kiko Argüello, founder of the Neocatechumenal Way, speaks during an audience with members of the Way in Paul VI Hall at the Vatican, February 1, 2014 (CNS photo).

In the letter, the Holy Father confirmed that “as far as it pertains to the celebrations of the Paschal Vigil and the Sunday Eucharist” there is no change in the Holy See’s confirmation of the approval of these liturgies when the statutes of approval are “read in their entirety.”

But there is also no change in the Holy See’s desire for unity in local Church communities.

The message came in re­sponse to a letter sent by Argüello in which he told the Pope he was concerned about several negative interpretations of the words of the Holy Father addressed to a group of some 12,000 neocatechumens on February 1, 2014.

In his response, Pope Francis confirmed the validity of the Statutes of the Neocatechumenal Way and acknowledged “the evangelizing dyna­mism of the Neocatechumenal Way, the experience of authentic conversion of life of so very many faithful, and the fruits of good generated thanks to the presence of the communities all over the world.” The Pope also confirmed his “paternal closeness” and “loving encouragement” to Argüello and “all adherents to the Way.” But he reiterated that “it would be better to renounce living in all its details what the itinerary of the Way would demand in order to ensure unity.”

The Zenit news agency spoke with Argüello about the letter.

What motivated you to write to the Holy Father?
Kiko Argüello: During the course of the audience that the Pope had on February 1, Francis sent 450 families on mission to China, Vietnam, India and Mongolia, as well as in many other cities in Europe and in the world.

In the indications given to the families, full of joy in seeing so many children, he said that at times, to find communion with the dioceses where the families are sent, that they could renounce “some details” to foster the ecclesial communion with the diocese. We agree that ecclesial communion is very important, but these words were read out of context and interpreted negatively by some who are not favorable towards the Way: immediately they took away the Eucharist celebrated in community on Saturday night at the Sunday vigil, and eliminated the Paschal Vigil of the community, and this was a terrible harm.

This development prompted me to write a letter to the Pope expressing my concerns. Because the problem is: Who decides which details can be removed? Maybe it meant that the statutes approved by the Holy See were no longer valid?

Because of these interpretations, some pastors and bishops have begun to change the liturgical praxis of the Neocatechumenal Way that was approved in 2008 by five Congregations of the Holy See, after a process that lasted several years.

What does the response of the Holy Father mean in this regard?
Kiko Argüello: The Holy Father, in this letter sent by Archbishop [Angelo] Becciù, confirms that what he has said in the indications to the families does not touch at all the Statutes of the Neocatechumenal Way and, citing article 12, which speaks on the Paschal Vigil, and article 13, which speaks of the Eucharist of the Way, he confirms that “as far as it pertains to the celebrations of the Paschal Vigil and the Sunday Eucharist” those articles are “the regulatory charter of reference” for the Way.

So, thanks to God, the Pope has saved us, because the details of one song or of a particular thing can be changed, we agree, but we had these interpretations that seemed to nullify the statutes.

We are very happy that the Pope loves us and defends us.

Why are these two articles so important?
Kiko Argüello: Article 13 is very important because it says that the Neocatechumenal Way celebrates the Eucharist after the first vespers of Sunday in small communities, and that these celebrations are part of the liturgical ministry of the parish and are open to everybody.

This is something wonderful because the communities are full of young people and we were able to ensure that the youth, instead of going to nightclubs on Saturday night, come to the Sunday Eucharist. The Holy See, understanding this pastoral reason, allowed some concessions to help the participation of so many young people. For us this is fundamental, because in the end, there is one point: Why do we have so many children? It is as if some wished to punish us for this. 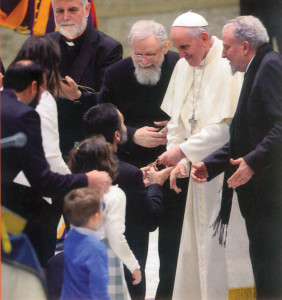 Pope Francis with leaders of the Neocatechumenal Way, Kiko Argüello (right) and Father Mario Pezzi (left) greeting families setting out on mission around the world.

The fact of having obeyed Humanae Vitae has made it so that we are full of youth and these youth are all in the Church and from these youth the vocations to the seminary are born. There are 100 seminaries where the vocations that come from these families can be found, and the Pope has understood this very well.

Regarding article 12, the communities from all over the world are helping the parishes to rediscover the Paschal Vigil. The Holy See, in the fundamental document on the Paschal Vig­il, Paschalis Solemnitatis, expressed sor­­row in seeing that the Paschal Vigil, instead of being “the mother of all vigils” and the center of the liturgical life of the faithful, has been reduced instead in many parishes to an evening Mass.

Article 12 of the statute states that “the Neocatechumenate will stimulate the parish to have a richer celebration of the Paschal Vigil.” His Eminence, Cardinal [Antonio] Cañizares, prefect of the Congregation for Divine Worship, has precisely underlined this role of the Neocatechumenal communities, saying that the Polish episcopal conference, for example, has thanked the Way because it is helping to recuperate and rediscover the importance of the Paschal Vigil all over Poland. 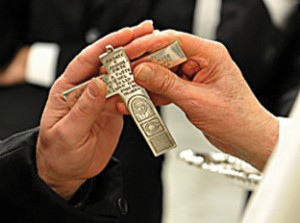 The cross that will lead them on their way.

The letter from Francis

Here is the letter sent by Archbishop Angelo Becciù, Substitute of the Secretariat of State, to Francisco (Kiko) Argüello, founder of the Neocatechumenal Way.

April 3, 2014
Most Esteemed Sir
Mr. Francisco ARGÜELLO,
With a respectful letter of the past March 15th, you expressed to the Holy Father your grave concern because some people interpreted a quote from the discourse of the past February 1st in a negative way towards the Neocatechumenal Way; there, where His Holiness said that, at times, it would be better to renounce to live in all its details what the itinerary of the Way would demand, in order to ensure unity among the brethren who form the one ecclesial community. I have to assure you that Pope Francis has considered carefully what you explained and wishes to confirm, as he has already expressed in the context of the audience and of his speech on February 1st, his paternal closeness and his loving encouragement to you and to all adherents to the Way.

The Holy Father does well know the evangelizing dyna­m­ism of the Neocatechumenal Way, the experience of au­thentic conversion of life of so very many faithful, and the fruits of good generated thanks to the presence of the communities all over the world. His Holiness is convinced that the words above mentioned, which aimed to underline the need to safeguard the precious good of ecclesial communion, do not lend themselves to misunderstandings, above all because they are valid for any form of Christian life.

Such words do not in any way modify the Statutes, rather they confirm them: As far as it pertains to the celebrations of the Paschal Vigil and the Sunday Eucharist, mentioned by you, articles 12 and 13, read in their entirety, constitute therefore the regulatory charter of reference.

As the Paschal Solemnities approach, Pope Francis assures his closeness and his remembrance in the Lord and, while he asks you to persevere in prayer for his universal ministry, he sends from his heart to you, to the International Team and to all the adherents to the Neocatechumenal Way, his Apostolic Blessing. With feelings of profound esteem and a heartfelt greeting in the Lord.