Interview with James Bogle, the new president of the Una Voce group

Interview with James Bogle, the new president of the Una Voce group 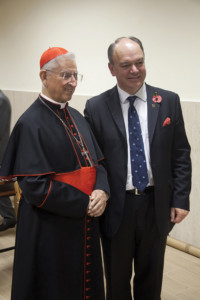 A talk with the new president of the Una Voce group, the former chairman of the Catholic Union of Great Britain, James Bogle. The Una Voce group seeks to support the use of the “old rite” of the Mass, noting that Pope Benedict XVI said its use was “numquam abrogata” — never abrogated (set aside) by the Church.

When Cardinal Dario Castrillon Hoyos spoke on November 10 to the General Assembly of the International Federation Una Voce, he brought some important news. “I met Pope Francis very recently,” the cardinal told the conference attendees in response to a question. “And he told me that he has no problem with the old rite, and neither does he have any problem with lay groups and associations like yours that promote it.”

Castrillon Hoyos was answering a question about the situation in the congregation of the Franciscan Friars of the Immaculate and the measures adopted by the Holy See (which he confirmed were taken only as a result of internal problems that had nothing to do with acceptance of the extraordinary form of the Roman rite in the Church).

The Una Voce General Assembly is convened every two years. This most recent gathering took place in Rome on November 9 and 10. It included a series of religious celebrations in the extraordinary rite, like solemn Masses and vespers, some in St. Peter’s Basilica, from November 7 to 11.

A former soldier, writer of a number of books and also an occasional contributor to Inside the Vatican, Bogle is a lawyer by profession and presently a barrister of the Middle Temple and former chairman of the Catholic Union of Great Britain.

Una Voce was established in 1965 to defend and promote the Church’s traditional liturgical heritage. It is made up of 43 member associations from different countries around the world. Since the promulgation of the motu proprio Summorum Pontificum on July 7, 2007, its activities have grown considerably. Since that date, Una Voce has admitted 17 new associations: from Ireland, Malta, Mexico, Peru, Colombia, Chile, Casablanca, Philippines, Japan, Portugal, Belarus, Brazil, Cuba, Ukraine, Costa Rica, Puerto Rico, Canada, and, in October, Latvia and Croatia. Mr. Bogle graciously granted the following interview to Inside the Vatican. 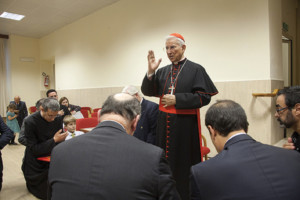 His Eminence castrillon Hoyos giving his blessing to the Una Voce Assembly in November.

You have just been elected president of Una Voce. What will be your first order of business?

Obviously priority Number 1 is to maintain the gains we have achieved or have been given since Summorum Pontificum in 2007, to consolidate those gains, and develop them in so far as we can. I think it’s very important that we need to make sure we are there talking to people like His Eminence Cardinal Castrillon Hoyos, if possible the Holy Father, and to impress in so far as we can that we have perfectly reasonable requests to make. That all we are asking for, at least at the moment, is to have a proper implementation of Summorum Pontificum,

Those who came before me have prepared the way for us, people like Michael Davies, Dr. Eric De Saventhem, indeed Leo Darroch as well, and many other Una Voce members. All did a lot of work in the vineyard of the Lord. They were all laboring long before I was in this position, to get to the situation where we were granted, if that is the right expression, Summorum Pontificum, by Pope Benedict XVI.

It is an extraordinary document, because it contains those two instrumental words: “numquam abrogata,” never abrogated. That is something many Una Voce leaders and members, including myself, have long been arguing: that the old rite was never abrogated.

Indeed, the commission of cardinals in 1986 came to that very conclusion, but that conclusion went no further, it simply remained as the result of the commission of cardinals. And that strengthened the views of a number of theologians and certainly many in Una Voce that the old rite had never actually formally been abrogated, if indeed it could be.

So, when that was finally confirmed by the Supreme Pontiff in 2007 in Summorum Pontificum, this was a major breakthrough, not so much theologically, because we knew it was right theologically anyway, but in terms of the public celebration of the traditional rites and in terms of the wider world and their perception of what the position of the traditional Roman rite is and always was. I think it’s important that we hold fast to that achievement.

Do you think that backward steps would still be possible?

Bogle: We are very pleased with the way the celebration of the traditional Mass is now going worldwide and are obviously very grateful to Benedict XVI and also our present Pope Francis for all the support that they have given us in our right to worship in the traditional Roman rite. But equally, it’s possible to go backwards. We have to remember that.

But nonetheless, it is still cause for some apprehension, particularly for those places like the Philippines, for example, where a lot of people depended upon the Franciscan Friars of the Immaculate who provided the traditional rites for them. It is still a concern. But if I can stick my neck out a little bit, my view would be that we should not be interfering in the affairs of the Franciscans of the Immaculate. That’s not for us to do; it’s a matter for them. It’s a matter for the commissioner, it’s a matter for the Holy Father, but we have a right under Summorum Pontificum, if we are in a parish which is run by those Franciscans, to say to them we would like to have the traditional Mass. This is what Summorum Pontificum allows us to do. And if they say, “Well, we can’t give it to you,” they’ve got to make provision, or the bishop must make provision, for those members of the parish who would like to continue to receive the traditional rites. That is still in place. And I think it’s perfectly right for Una Voce, as a federation and indeed as individuals and individual associations, to be gently but firmly pressing our bishops, clergy and religious to provide us with the traditional Mass, particularly where there has been a traditional Mass in place and it has, for these reasons, been temporarily withdrawn. That’s the sort of thing I think we can and should do.

How are your relations with the hierarchy?

Bogle: As everyone knows, we’re fully loyal to the Church. And we are part of the mainstream of the Church. We work with and in the Church. My predecessors, Dr. Eric de Saventhem, Mr. Michael Davies, Mr. Ralf Siebenbürger, Fra’ Fredrik Crichton-Stuart, Mr. Jack Oostveen, and Mr. Leo Darroch, were all rightly insistent upon loyalty to the Holy See.

Therefore I think it’s important that we ensure that we have as good relations as we possibly can with the curia, the pontifical Commission Ecclesia Dei, and as far as we can with other prelates and bishops.

There isn’t any point in us upsetting them unnecessarily, because it does not achieve anything and quite often it can have negative effects. But there is nothing to prevent us from pressing our case. Summorum Pontificum is now the law of the Church, if you like; the genie cannot be put back into the bottle, it is out now and is not going back in again. So even if there were some adverse legislation, nobody is under any illusion now that it is not perfectly right and proper for any Catholic in the Roman rite to attend and to ask for the traditional Roman rite, as and when they wish it. It is our right now; it’s been declared in the law of the Church thanks to Pope Benedict XVI. There it is and it’s not going to be changed.

You are perfectly right, the law is in place. But what about its application?

Bogle: The application of Summorum Pontificum is obviously a different thing. Well, we all know what it’s like in our own dioceses around the world. There are variations on a theme, and that is where we have to work hard at the national level. That’s why I am also looking to consult with as many of the Council members and representatives of the Una Voce national chapters, also to hear their ideas, their plans, their hopes, their aspirations, and their fears and worries as well, so that we can assist all the national groups as best we can. My feeling is that the Council, and particularly the president, is the servant of the organization and should be here to serve the perfectly legitimate desire of all the Una Voce members to see the traditional rites in their proper place.

Do you believe the traditional liturgy is of great importance vis-à-vis the New Evangelization?

Bogle: For the New Evangelization to be effective, I think it is vital that the faithful also experience and understand the Church’s roots of history and tradition. Young people are especially aware of the importance of rediscovering the Church’s roots. It’s an enjoyable voyage of discovery. Moreover, if Catholics don’t understand their roots then it’s difficult for them to evangelize. When you attempt to evangelize, people will ask you, “What are the roots of your belief and Church?” If the answer is: “I don’t know, but I think you should join us,” that isn’t going to be terribly persuasive. Why should someone come to the faith if we can’t give a proper historical perspective to our religion and what its roots are? Even people who aren’t particularly attracted to the traditional rite of the Mass want to know about its history. It is not something that those seriously interested in evangelization can afford to ignore.

Then we can conclude in a somewhat optimistic vein…

Bogle: As already said, we are very pleased that the traditional rites have made encouraging progress since July 2007. More and more bishops are celebrating the traditional Mass, and many younger priests and seminarians are discovering the sacred heritage of the Church. The restoration of the traditions of the Church is looking more secure each day. Again, we are very grateful to Pope Benedict XVI and to our present Holy Father, Francis, for all of their support.