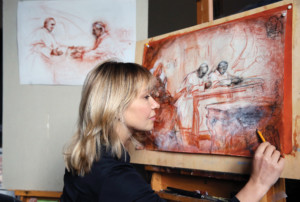 Natalia Tsarkova in her studio.

Immediately after the public audience on Wednesday, December 18, you presented Pope Francis with your latest artwork: a double papal portrait on paper, depicting Pope Francis and Emeritus Pope Benedict praying together. This was your first meeting. What were your impressions of him?

Natalia Tsarkova: I was supposed to present the double portrait in June, but it seemed too close to Pope Francis’ election. Besides, his part of the portrait wasn’t quite ready. So I asked for a postponement. My first impression was Pope Francis’ sensibility, his warmth, yet his moral fortitude.

What did he say about your drawing?

Tsarkova: He smiled and thanked me, but was so emotionally choked (and so was I) that I don’t remember his saying anything else. My drawing was a surprise; he wasn’t expecting it. I told him it was for his birthday, which had been the day before, and explained how its inspiration had come to me.

Your drawing depicts Popes Francis and Benedict XVI praying together on March 23, 2013, the day Pope Francis visited the Pope Emeritus at Castel Gandolfo. Can you explain its inspiration also to us?

Tsarkova: I believe the Holy Spirit usually inspires my artwork, especially my religious subjects. But I think the Madonna inspired this double portrait. As soon as I saw the news on TV, I made two different versions: one of the Popes embracing on the helicopter pad and one of them praying together.

As you may remember, when the two Popes went into the chapel, Benedict gestured to Pope Francis to sit down on the papal chair, but Pope Francis said no and with great humility suggested that they pray together. It was as if they knew to leave the papal chair empty for the Blessed Mother. First I drew the Popes and then Our Lady, who’s blessing them. She’s also their inspiration. As soon as I had this idea, I was overwhelmed by emotion and so knew it was what I should draw. I realized immediately, before the two Popes exchanged gifts, that this Madonna was the Madonna of Humility. Then, at the end of their prayers, miraculously Pope Francis gave Benedict a Russian icon of the Madonna of Humility, given to him by the Russian Patriarch Kirill to wish him good luck for his papacy and brought to Rome by Metropolitan Hilarion, Bob’s friend. At the four corners I drew the iconography of the four evangelists. 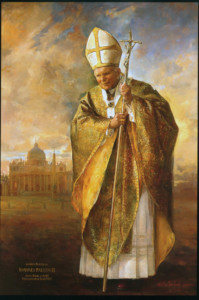 Is it the only artwork of the two Popes together?

Tsarkova: Yes, as far as I know.

Tsarkova: No, I’m studying him. I have to read everything he’s written to portray his personality. When I paint a portrait, I study in depth the biography, the writings, personal aspects like special occasions, hobbies, likes and dislikes, of my subject before I start drawing. Often I paint my official portraits using videos; with Popes John Paul II and Benedict, I made lots of drawings of them in person during events, audiences, Masses, but their vestments were always brought to my studio so I could portray their textures. (I studied Pope Benedict for a year before I started my first portrait of him). Usually I start by drawing several sketches on paper with a pencil, pen or charcoal; then with different color oil paints, still on paper, before moving to my easel and the canvas. I then draw the whole idea first with charcoal. I follow this by painting over the charcoal with black and white oils and then do the final painting with colors. I use the same methods as most of the Renaissance painters. I get official approval at every step before proceeding. Oh my goodness, you’re uncovering all my secrets! Help! 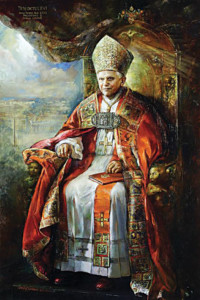 What about your recent drawing of the two Popes?

Tsarkova: Nobody commissioned it. I worked from the television videos that were repeated over and over again. It took me a day to complete the Popes’ portraits and about three full days to complete the whole drawing except final touches. Very fast! Pope Francis is very intense, whereas Benedict seems at peace finally. They’re grey because it’s pencil. I drew the rest with red chalk, the color of Christ’s blood, of love and of Christian faith. It’s too early to know where it will be displayed, maybe in the Museums.

In a RAI video of April 28, 2012, you say that a portrait is a symbol with a message; what’s the message of your dual portrait?

Tsarkova: Freedom of thought, humility, spirituality, fraternity, friendship, love, and the Madonna’s blessing of Francis’ papacy and of the Church.

You’re working here in your studio on a painting of St. George killing the dragon, which you’ve just told me was inspired by the Holy Spirit and is for you. Why St. George?

Tsarkova: He’s the patron saint of Moscow where I was born. I still have to finish the dragon and insert the right horse.

You have two paintings in the USA: a portrait of John Paul II at the John Paul II shrine in Washington, D.C., and La Madonna della Speranza (2004) at the Primavera Fine Art Foundation in Norcross, Georgia. Correct?

Tsarkova: Yes, except that the Madonna of Hope has traveled extensively in the States. Before leaving Rome, during Christmastime of 2004/5, Pope John Paul II hung it in his personal library. He invited me there to explain its iconography and my intended message. He was very ill and could no longer speak, but the room was full of light emanating from him. It was the last time I saw him. Alongside the Madonna I’ve painted four angels. They represent the four sets of mysteries of the Rosary: joyful, sorrowful, luminous, and glorious. 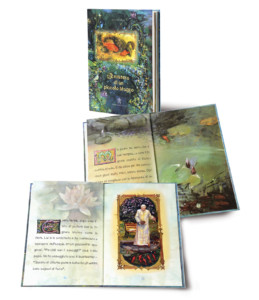 The cover and two pages of Il mistero di un piccolo stagno (The Mystery of the Little Pool) published by the Vatican Publishing House (Photo: Coen)

You’ve recently published a book entitled Il mistero di un piccolo stagno (The Mystery of the Little Pool) about a baby goldfish named “Bianco” (“White”) who lives in a fountain at Castel Gandolfo and is fed every afternoon by a man dressed in white. What inspired this idea? Did you write it directly in Italian or in Russian first? What’s its message?

Tsarkova: In the gardens at Castel Gandolfo there’s an area called “the little garden with a goldfish pond and a statue of the Madonna delle Grazie.” A path lined with ancient olive trees leads there. I love the peaceful atmosphere and the light. So did Popes John Paul II and nature-lover Benedict, who came there to pray and feed the goldfish every afternoon with Archbishop Georg Gänswein. I was going through a difficult financial period so when a baby goldfish jumped out of the water toward me, I felt this was a Godsend, and so the story narrated by the baby goldfish was born. Its message is to find and love God through prayer. I wrote it in one sitting directly in Italian as a language exercise. It’s now part of the first-grade religion program in many elementary schools. It’s like a children’s catechism.

Archbishop Gänswein wrote the preface and presided over its presentation, which took place just a week before my presentation of my double portrait. At the book’s presentation, His Excellency said something that moved me greatly: that each time he’d read the book he’d discovered a new message.

I’d presented an album with my original illustrations to Pope Benedict XVI on Easter Monday 2012 at Castel Gandolfo, of course, because that’s where the story takes place. Although very tired from his recent trip to Cuba and the Easter celebrations, Pope Benedict was very pleased. Afterward, Archbishop Gänswein told me that he hadn’t seen the Holy Father so relaxed and joyful in a long time.

You’ve also written a screenplay. When and where will it be shown?

Tsarkova: It was performed at a festival called Arte e Fede (“Art and Faith”) last May in Orvieto, where I also first presented the book. I’ve also received a proposal to turn it into a cartoon.

Are you writing another book?

Tsarkova: Yes, another fable loosely based on St. Francis of Assisi in honor of Pope Francis. It’s much longer than The Mystery of the Little Pool. I’m writing it in Russian. It’s a work-in-progress so I don’t want to say anything more.

Your website www.nataliatsarkova.net includes many of your works of art not in your brochure, but still in your collection. Are any for sale?

Tsarkova: Yes, maybe, but some are so much part of my life that it would be hard for me to part with them.

How can someone commission a painting from you?

Tsarkova: Through my website, but I seldom do private commissions except official portraits.