Benedict XVI greets Nikolas von Liechtenstein, Liechtenstein’s envoy to the Holy See, during the pontiff’s annual meeting with the diplomats accredited to the Vatican on January 9.

Ambassador Nikolas von Liechtenstein: We have a small diplomatic corps, so, like many small countries, our government decided to have a non-resident ambassador. Since last year, I have had less work because I am no longer ambassador to the European Union and work only part-time for the government as an advisor. I come quite frequently to Rome and can spend more time here. I come every month for a few days.

What does your work consist of when you are in Rome?

For the moment, the main issues I deal with are negotiations on an agreement to redefine Church-State relations in Liechtenstein. There is a political will in the country shared by the Holy See, according to Vatican Council II, to have a more cooperative relationship, respecting the autonomy of the Church and the State respectively. Up until the present, there has been a system of the Catholic Church being the Church of the State. This is now rather exceptional in Europe. For example, parish priests are still on the payroll of the political communes, which also pay most other expenses of the Church.

Beside such concrete tasks, there are of course the routine matters of diplomatic life, like exchange of information, visits, representational duties. It is too early to speak on the negotiation results, but the aim is to affirm the autonomy of the Church in fields like nominations and legal personality and financially make it less part of the State so that it can become its own boss in its own house, so to speak. On the other side, the State and the political communes will have fewer duties.

Was the request for the change proposed by the government or by the Catholic Church?

The initiative came from the State. But I would say there was equally a wish on the Church’s side to have transparent rules on how to run things, to get rid of political interference which you necessarily have when the political authorities take care of your expenses directly, including, for example, the candles for Mass.

Traditionally, the Catholic Church has had a very strong role in Liechtenstein. How does that fact manifest itself today, in the so-called “post-modern” society?

There certainly are big changes in the country. One important aspect is immigration due to a very strong economic development in the last 50 years. Today, 35% of the population are non-Liechtenstein citizens, with all different religions represented. The percentage of Catholics has decreased in that time from over 90% to 74%. The country has the highest per capita income in Europe. Rich societies tend to have a more materialistic outlook than poorer ones. The surrounding rather secular countries also have a great influence mainly through the media. So, in many ways the traditional position of the Church has weakened, like all over Europe. The practice of faith has fallen, although the majority of people still see themselves as belonging to the Catholic Church. Many do not want to be part of an institutional setup and do live an individualistic form of religion that often means an impoverishment of religious life and of the knowledge it implies. As in other Western countries, the new evangelization is a big challenge for the Church.

As in Switzerland, we have a strong direct democracy. There was a governmental proposal on homosexual couples which gives them, in many ways, the same rights as married people. The Church very clearly took a position against this law but the majority voted in favor of it. On the other hand, shortly thereafter an initiative to liberalize abortion was rejected by the people. We live in a time of disorientation and the search for basic values is becoming more acute, especially among young people. Therefore, there are possibilities for the Church to become more active again in public life.

You have spent your whole life in diplomacy. What is it like working with the Vatican as a diplomat?

I think it is a very special posting. As an ambassador, you are normally accredited to a nation state or an interstate institution. The Holy See is neither. Its recognition in public international law mainly derives from the Pope’s spiritual role in world affairs. The main difference, from a diplomatic point of view, is that you deal less with day-to-day political issues in the Vatican, but more with the general well-being of the human person and society. You take more long-term views and they always have an international perspective. As a Catholic, it is also very rewarding to be so close to the center of the Church and be able to follow developments that, from the point of view of the faith, are close to your heart. Also for a State it is important to see how the Holy See sees the great issues of our time. 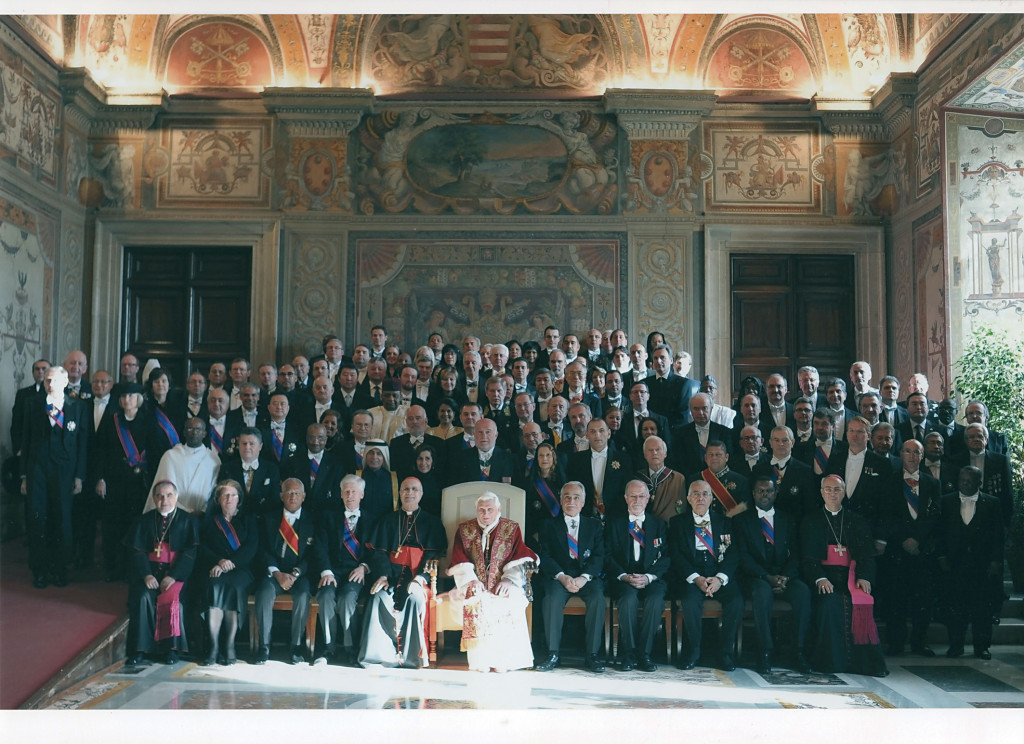 Benedict XVI and the ambassadors to the Holy See after the Pope’s address on January 9. Nikolas von Liechtenstein is near Cardinal Tarcisio Bertone, Vatican secretary of state (L’Osservatore Romano photos, courtesy of Liechtenstein’s embassy to the Holy See)

Can you remember a particular event which really touched your heart when working with the Vatican?

My first concrete professional contact with the Holy See was as a young diplomat at the Council of Europe. The Vatican’s envoy came to seek support against a recommendation that would have seriously hampered the right to freedom of conscience for doctors. No member state of the Council had understood the implications of this recommendation and it had already been adopted. Thanks to the Vatican’s initiative, we found the necessary majority to annul this ill-fated piece of legislation.

Defending the right of conscience is so important, especially when you look at what happened in the history of Europe in the 20th century, how cautious one has to be with these issues. It showed me in practice how big a contribution the Holy See can have in defending fundamental rights. From a historical perspective, it is extremely important to have an independent voice that judges issues without being submitted to unhealthy “peer pressure.”

Based on your experience in diplomacy, how do you judge the situation of Christians in the world?

Europe in the past two centuries has been very much influenced by relativistic phil­osophies. We feel it today perhaps more on a political level than before when these ideas were first abstract philosophical approaches. We live in a very materialistic society. With these tendencies, we see discrimination against Christians in different European states. But, on the other hand, more and more people understand that the future of humanity is at stake and the Christian religion brings the right answers. For instance, in bio-sciences, many begin to grasp that research and its applications must have strict limits, otherwise we really will have a suicide of humanity, in a way.

There are more occasions to bring up the right arguments and we Christians should take advantage of them. Christian faith and the positions of the Catholic Church are very well-attuned with modern science, so we should not be afraid to say so.

Europe should be more engaged in defending religious liberty throughout the world. Persecutions of Christians have taken on dramatic proportions, mainly in Islamic countries. 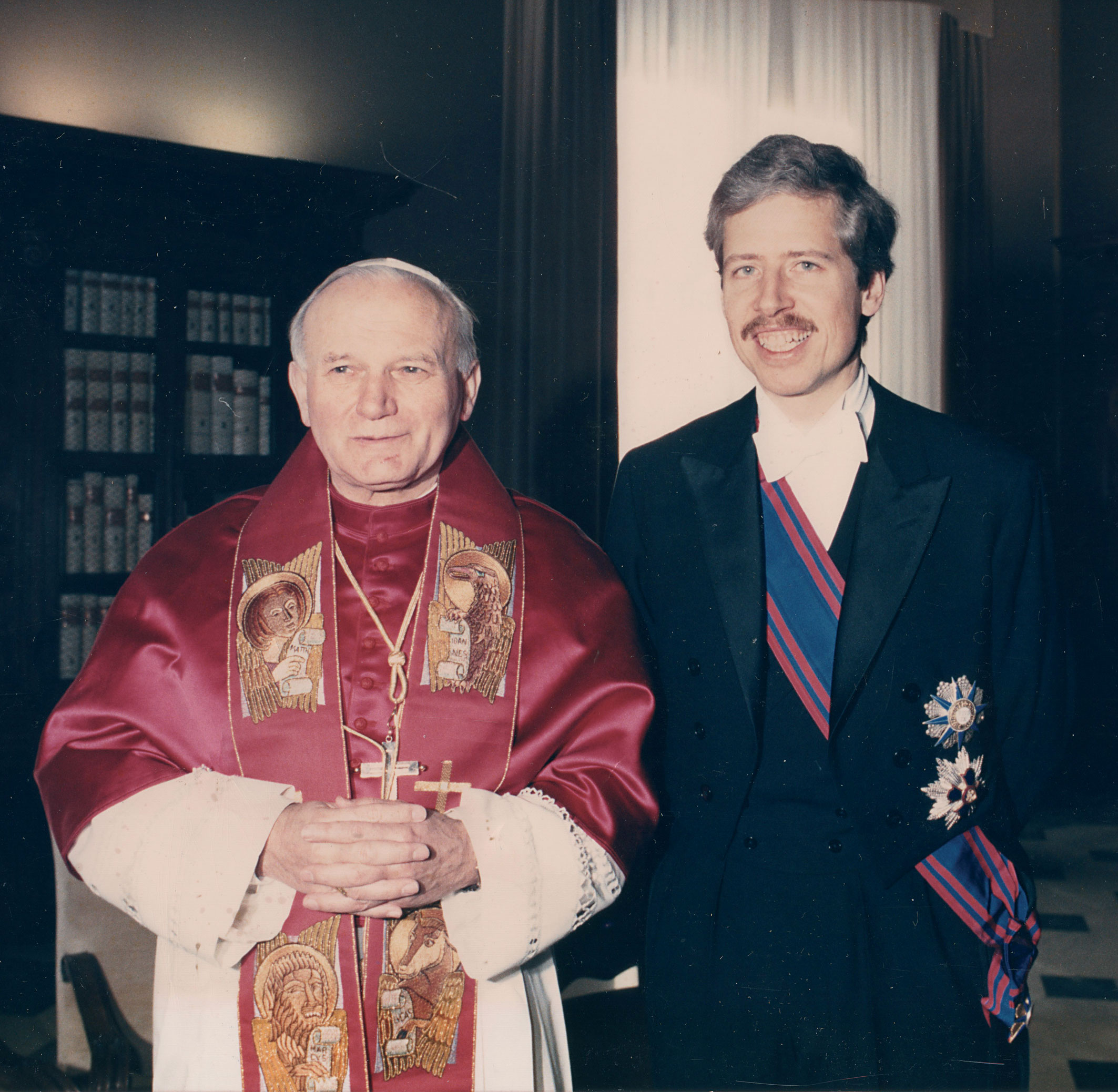 I always ask myself if the gift of my faith is present enough in my work. It is a very personal challenge. Our states have quite a pluralistic background today; we have to take that into account. As a diplomat, you have to follow your instructions and defend the positions of your country according to your own laws. So you have to discern how to act as a loyal servant of your state and how to make the truth and beauty of the Christian faith shine. I can see in the diplomatic corps at the Holy See, which is of high quality, good examples in that respect.

Do you have any personal memories that link you to the Vatican, to the Popes?

Today I passed by the statue of Pius XII and it reminded me of the great privilege I had with my parents (Franz Joseph II, Prince of Liechtenstein, and his wife Countess Gina von Wilczek) to be received by him as a child. It was the first direct contact for me with the Vatican. The kindness in his eyes and this very ascetic figure I still have in my mind. The Pope I met the most often was John Paul II. I had the privilege to talk with him several times. He helped me to live my faith and, from the eyes of a diplomat, he was impressive by his personality that had so many aspects. I feel really privileged to have been able to follow his long pontificate so closely.

My first memory with him was at a private audience. He asked very direct questions about what I did. You could immediately feel that he was really going towards all he met; he completely amazed you as a person with all his love. On later occasions, when he noticed you, he always managed to make a little sign to greet you. He had a great sense of humor. He was a man who spoke very clearly and who was also a challenge to one’s own spiritual life when one listened to him. He was interested in an academy of philosophy we had founded in Liechtenstein.

Benedict XVI, I see him as an enormous gift for the Church and for the world. He really sends out a message of peace and brings across the message of Christ and his love in a very convincing and clear way. I had had the occasion to meet him once when he was the prefect of the Congregation for the Doctrine of the Faith. I was very impressed by his kindness. He listened very carefully to what I said and the answers were to the point. Now as ambassadors we sometimes have the occasion to see him and that is always a great experience. His humility, his intelligence and his love are palpable.

Why did you choose a diplomatic career?

It was not clear for me at the beginning. When I finished my studies, I first worked for some time at the Red Cross in Geneva. Then I worked at the Court of Justice and was preparing for my bar exam to become a lawyer. As I had already worked on some specialized issues of international public law for the government, I was asked to do a specific job for the government in this field, so through international public law I entered the diplomatic field. Once I was in it, I thought it was really a vocation to defend my country and work together with others and in a way to improve the world in which we live. I am very happy to have chosen this career.