A Catholic priest in Paris, France

“We Need Tangible Signs of Faith” 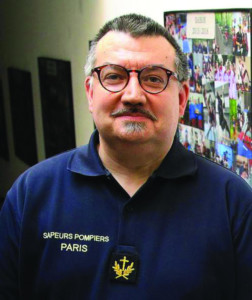 Every year since 1803, even during the Nazi occupation, Notre Dame Cathedral in Paris has held a Christmas Mass — except for this Christmas, because of the historic fire that ravished the Cathedral in April 2019. The fire of Notre Dame is one that will remain in the memory of the French, and of Catholics around the world, and with it the famous French priest who rushed into the burning Church in order to rescue the Blessed Sacrament.

What is less known, however, is that this same priest, Fr. Jean-Marc Fournier, 53, also appeared on the scene following France’s largest terrorist attack to date, in 2015, at the Bataclan Theatre. After the attack which killed 130 people and wounded over 300, Father Fournier arrived at the scene where he immediately began ministering to the wounded and dying. “I gave collective absolution,” he commented.

Again, this past April, when Fournier received word that Notre Dame Cathedral was burning, without hesitation he traveled directly to the cathedral. Assessing the situation, he insisted on rushing into the church with the firefighters: Fournier had one aim, to save the Blessed Sacrament. He said, “We quickly focused on the priority: the Relics of the Passion and the Blessed Sacrament.”

Fournier recounted how, once inside the Church, he made his way directly to the Altar of St. George to rescue the sacrament. Standing with the rescued Hosts in hand as the fire raged, Fournier said, “I asked Jesus — who I really believe is in these hosts — to fight the flames and preserve the building dedicated to his mother.” In an interview with the New York Times, the priest joked, “I thought Jesus could help us a little bit and work, too. I invited him to worry about his own house if he didn’t want to finish the night under a tent by the Canal Saint-Martin.” After rescuing the Blessed Sacrament, Fournier did not stop, but ran throughout the Church collecting many precious artifacts, including the Crown of Thorns and the cloak of St. Louis. Fournier helped the rescue team form a human chain so that he could pass these artifacts out of the burning Church quickly until the flames became too dangerous.

Father Fournier, a Knight of the Order of the Holy Sepulchre, commented on the significance of the Crown of Thorns: “We sometimes mock Saint Thomas who wanted to touch Christ’s wounds left by the nails, but in certain circumstances, we need tangible signs of faith.

“All the relics related to the Passion of the Lord Jesus Christ have a fundamental importance for Christians like us. We are well known to be the only ones to venerate an empty Sepulchre … Fortunately empty, because if Jesus had not risen from the dead – as St. Paul reminds us – our faith would be in vain.”

In his Easter homily, French Archbishop Michel Aupetit honored Fournier’s heroism and praised the priest for saving the Blessed Sacrament, saying, “What is more precious? The cathedral, the treasure, or the bread crumb?” Aupetit pointed out: “It is for this Body, veiled under the appearance of a crumb of bread, that this cathedral was built.”