“By Nature the African is a Very Spiritual and Believing Person” 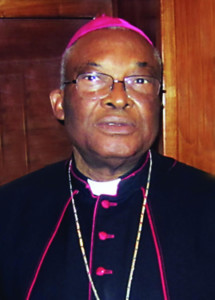 To this day, in the midst of all of the politics, turmoil, and tension that surround the Church, and particularly the Vatican, there remains a lone canon (that is, one who is part of the ecclesial body responsible for a cathedral) of St. Peter’s Basilica who is willing, despite everything, to meet and spend time with pilgrims from all over the world. He is one who is always ready to receive them and speak with them, one who worked with Pope John Paul II as his personal secretary. When you encounter Archbishop Emery Kabongo, he leads you directly to the tomb of John Paul II; but more importantly, he brings you through the Basilica, climbing down the narrow metal steps into the dark corners underneath, to touch the tomb of St. Peter and to pray there, as a way of redirecting you to the spiritual aspects of the Faith — and to a deeper relationship with Christ. Kabongo is a beacon of light in a dark time, whose work as a canon is to focus on spiritual things before earthly things. As Kabongo leads pilgrims through the Vatican, it is evident that he is beloved by all of the workers there as well.

Born in Bena-Kazadi-Tshikula, Democratic Republic of the Congo, on July 22, 1940, he was appointed in 1982 as Pope John Paul II’s second secretary, service that lasted until 1987. He worked side-by-side with John Paul II from 1982 to 1987, traveling alongside the Pope on all his international trips.

On December 10, 1987 Pope John Paul II gave him the personal title of Archbishop of Luebo in the Democratic Republic of the Congo, and on January 6, 1988 he received his episcopal order from Pope John Paul II.

Before his appointment as Personal Secretary to Pope John Paul II, Archbishop Kabongo was working at the Vatican’s Secretariat of State until, one day, he received a call from the Pope, as he recalls in the book Accanto Giovanni Paolo II (“Side by Side with John Paul II”): “My first memory of John Paul II was when he appointed me as his personal secretary, so that I could help his first secretary, Stanislaw Dziwisz. I didn’t write a letter or ask for an appointment. That’s why I thank him for his Catholic mentality and for thinking that an African would be a good secretary.”

Archbishop Kabongo writes about one particular trip that he said he will always remember: “During his trip to Colombia I got sick and I just remember waking up in the bed that had been prepared just in case the Pope didn’t feel well, especially since he could have trouble with the altitude. So the doctors took me to that room and I asked myself: ‘How is it that I’m here?’ It turns out it was John Paul II who asked them to put me in a safe place so that I
could recover, and I stayed there for two days.”

“He was like a father, for me and for the rest of the team. He never yelled or raised his voice at us — never,” Kabongo said.

In an address given by Pope John Paul II on the occasion of Kabango’s appointment as Bishop of Luebo, Pope John Paul II praised Kabongo’s spiritual and intellectual formation, as well as recognizing Kabongo’s love of his homeland: “Do I need to tell you what the joy was for me in celebrating this ordination, in conferring the fullness of
the priesthood on Monsignor Kabongo?

“I remembered his long intellectual and spiritual preparation for pastoral service, his experience in the representations of the Holy See in Asia and South America, and the ten years during which I appreciated his careful
collaboration.

“Dear Excellency, you will now reach the homeland that you love so much and where you are expected by the vast Christian community of the diocese of Luebo.”

Kabongo’s deep love for his homeland, the Congo, in central Africa, is clear when he speaks about Africa’s Christianity.

In a 2014 press communiqué for the presentation of the Conference “The Church in Africa from Vatican II to the Third Millennium: Tribute of Africa to Popes John XXIII and John Paul II,” Kabongo wrote: “We can say that the Church in sub-Saharan Africa is young: Christianity took root in us in the colonial period, it is just over a hundred
years old (…) in the post colonial period, it has just over a hundred years of history.