Pope Francis presides over Mass on Easter Sunday morning in St. Peter’s Basilica at the Altar of the Chair, and thanks all those who worked hard to make the Triduum celebrations so beautiful 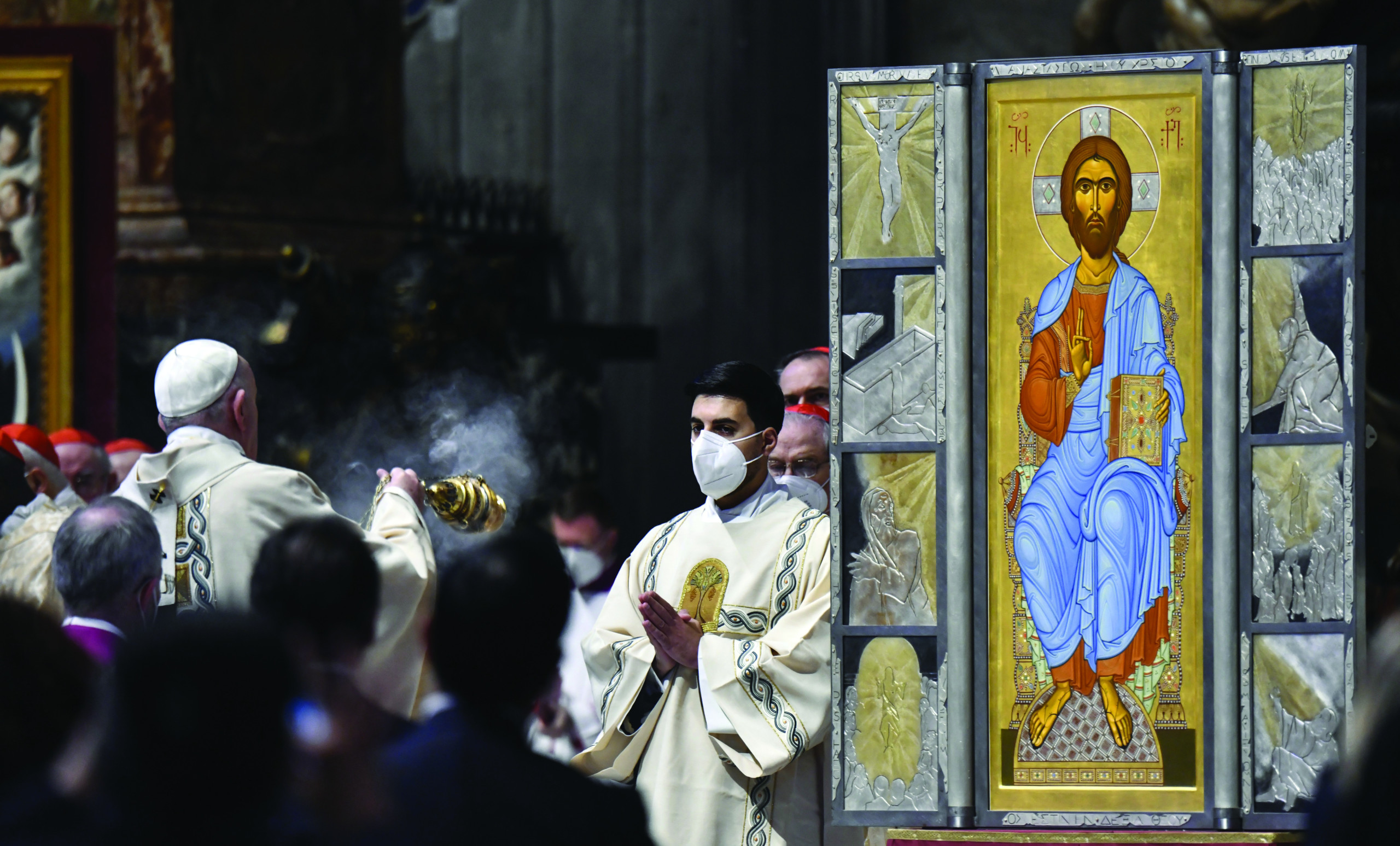 Pope Francis uses incense as he venerates an icon of the risen Jesus during Easter Mass in St. Peter’s Basilica at the Vatican April 4, 2021

Pope Francis celebrated Mass on Easter Sunday morning at the Vatican Basilica with a small number of the faithful present.

Yet the Pope was joined by countless Catholics around the world via digital media across various social media platforms.

At one point, nearly 9,000 people were simultaneously celebrating Jesus’ Resurrection with the Pope on Vatican News’ English-language Facebook page alone.

Over 170 broadcast networks and media outlets picked up the Easter broadcasts, which has seen much wider coverage in recent years due to live-streaming.

The Vatican this year also added a service in sign language, thanks to the “No One Left Out” project launched by the Dicastery for Communication to reach Catholics everywhere.

Pope Francis kisses the Book of the Gospels

On this holiest of Christian feasts, Pope Francis chose not to multiply words but to reflect in silence on the mystery of Christ’s Resurrection from the dead.

In place of a homily, he led the faithful in silent prayer following the proclamation of the Gospel of John (20:1-9), which was chanted in both Latin and Greek.

During the Liturgy of the Eucharist, the Pope recited the First Eucharistic Prayer, known as the Roman Canon.

It is the oldest Eucharistic Prayer used in the Latin rite, and its current form dates from at least the 7th century under Pope St. Gregory the Great.

Catholics will recognize it by its extensive list of Saints, Apostles, and Martyrs.

Flowers were donated by Dutch florists

The Easter floral arrangements which adorned St.Peter’s Basilica for the Easter Mass were donated by florists from Holland.

This marks the 35th year in which they have done so,though the tradition paused last year due to the pandemic.

The Dutch florists’ compositions featured Avalanche roses for the Altar of the Chair in the Basilica.

The florists also expressed their closeness with those suffering from the pandemic by donating some of these roses to residences for the elderly in Rome.

At the end of Mass, Pope Francis welcomed Cardinal Mauro Gambetti as the new Archpriest of the Papal Basilica of St. Peter.

“I wish you the best in your service at this church which is so important for all Christians,” he said.

Cardinal Gambetti has the task of announcing the granting of the Pope’s plenary indulgence ahead of his traditional Easter “Urbi et Orbi” blessing.

Pope Francis also thanked Cardinal Angelo Comastri for his dedication and 16 years of service in that role. “Thank you, Cardinal Comastri,” he said. “Thank you for your pastoral care, your spirituality, your preaching, and your mercy.”

The Pope also expressed appreciation for those who had worked so hard to prepare the liturgical celebrations of the Paschal Triduum.

“I want to thank all those who work here in St.Peter’s: the choir, ministers, lectors, deacons,” he said.“To all of you, thank you so much!”