“Cardinal Grech was a religious of great wisdom and deep spirituality, who loved the Church and religious life” — Cardinal Giovanni Battista Re

By ITV staff with CNA 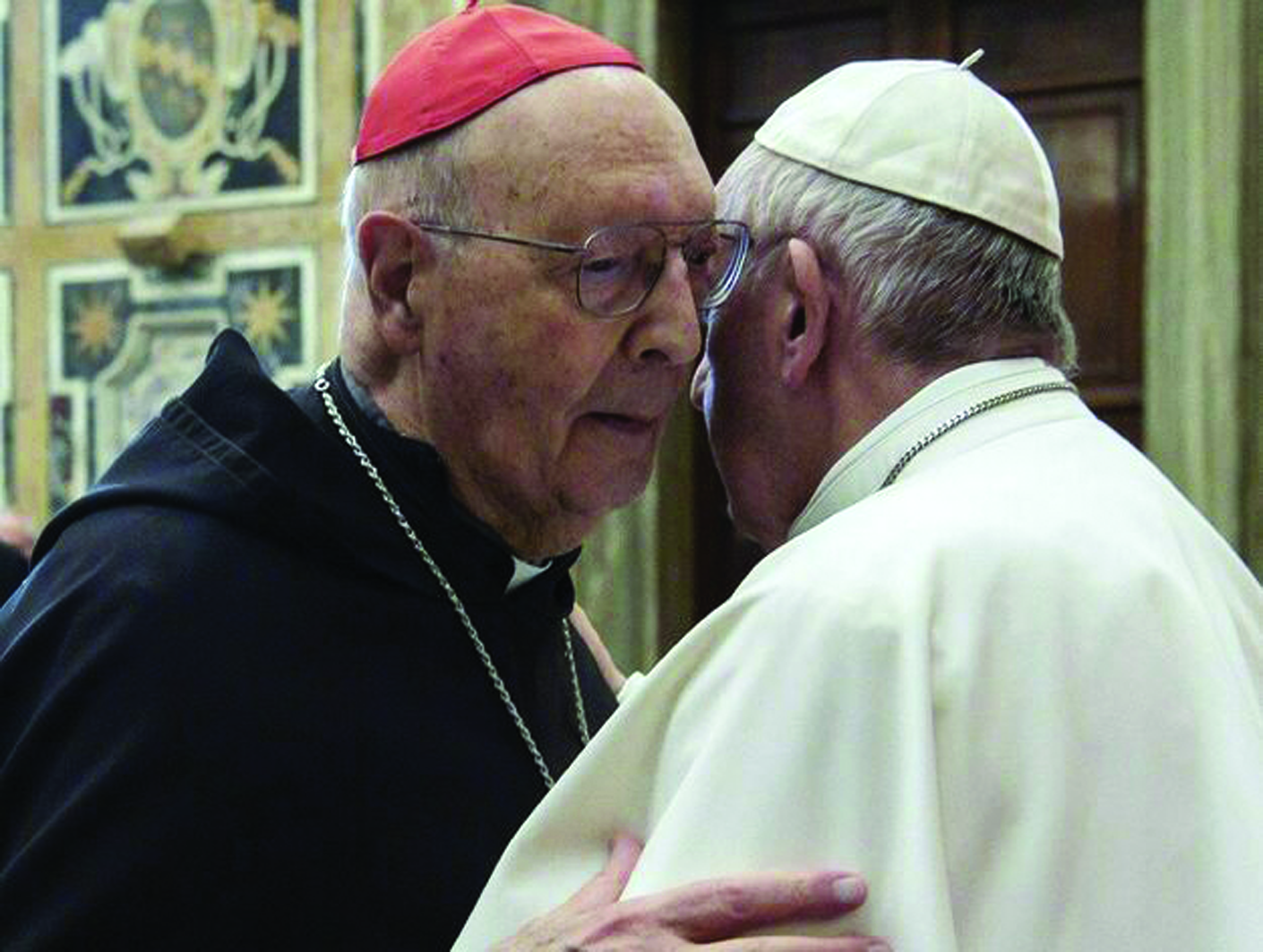 Cardinal Prosper Grech embraces Pope Francis. He died on December 30 at the age of 94

Cardinal Prosper Grech, an internationally renowned theologian whose career at the Vatican spanned six decades, died on December 30 at the age of 94.

Cardinal Grech was born Stanley Grech on the island of Malta on Christmas Eve, 1925. He entered the Augustinian Order at the age of 29, where he took the name Prospero and was ordained a priest in Rome at the Basilica of Saint John Lateran in 1950.

By 1953 he had completed his studies at the Pontifical Gregorian University, obtaining his licentiate and doctorate in sacred theology, and went on to receive a further licentiate from the Pontifical Biblical Institute.

After pursuing further studies at both Oxford and Cambridge, Grech returned to Rome, where he served as an expert at the Congregation for the Doctrine of the Faith, and taught at several universities attached to the Holy See.

In 1961 he was pointed the secretary of Bishop Pietro Canisio Van Lierde, who was a sacristan of the Apostolic Palace and Vicar General for Vatican City State.

In this role as priest-secretary, it happened that during the conclave of June 1963, that which elected St. Pope Paul VI, Grech encountered the then-Cardinal Giovanni Battista Montini in the apostolic palace. Montini asked if he was the confessor of the conclave. Grech said he was not, but Montini asked if he could hear his confession nonetheless. A few hours later, Montini was elected Pope.

In a 2013 interview, Grech recounted the story, saying that he hoped he did not give the future Pope Paul VI “too arduous a penance.”

Grech founded the Augustinian Patristic Institute at the Lateran University, serving as its first president from 1971-1979.

Grech also taught hermeneutics at the Pontifical Biblical Institute for more than 30 years.

Pope Francis sent the following telegram of condolences on the death of Cardinal Grech to the prior general of the Augustinian Order, Father Alejandro Moral Antón:

Upon hearing the news of the pious departure of the venerable Cardinal Prosper Grech, I wish to express sentiments of condolence to you, to the entire Augustinian Order and to the relatives of the dear cardinal, towards whom I have always had great esteem, both because of his personal witness of Christian and consecrated life, as well as for his exemplary service to the formation of new generations, especially of priests. In recalling the long and competent service he carried out as a teacher in various Roman universities, as well as that lent to the Holy See, I raise my prayer of pleading that the Lord may welcome his soul into the eternal kingdom of light and peace, and with my heart I send to you, his confreres and those who mourn his departure, the Apostolic Blessing.

Together with this extraordinary study and teaching activity, Father Prospero always found time to carry out an intense pastoral activity in the Santa Monica Chapel, open to the public, where he was willingly available to hear confessions.

He was created a cardinal by Pope Benedict XVI in 2012, but, being over 80 at the time of Benedict’s resignation, was too old to vote in the conclave of March 2013. He did lead a meditation for the cardinal-electors gathered in the Sistine Chapel before the start of voting.

The Vatican paid its last respects to Cardinal Prospero Grech at a January 2 Mass in St. Peter’s Basilica before his coffin was brought to Malta for burial. 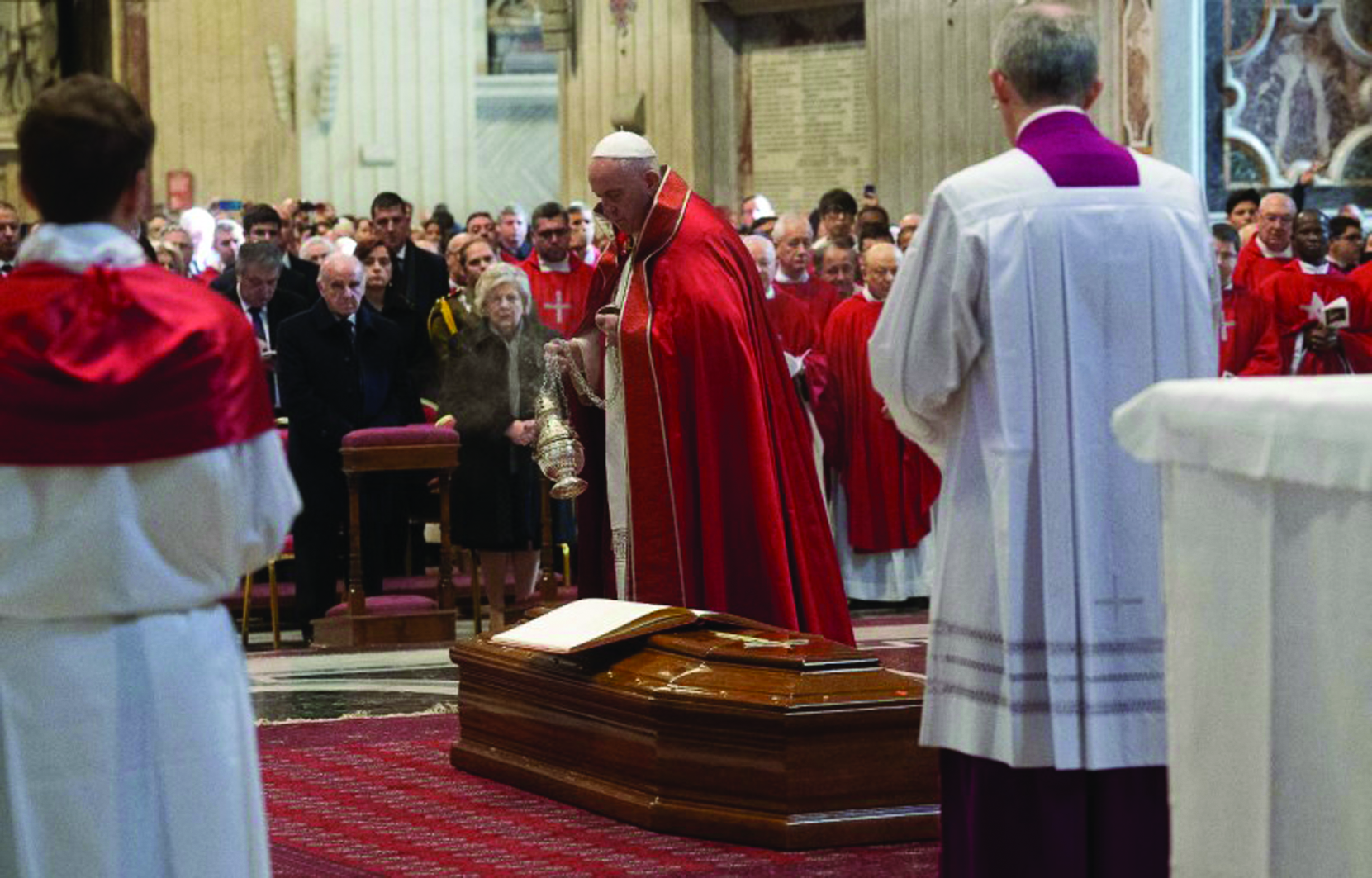 The funeral was celebrated by the Deputy Dean of the college of cardinals, Cardinal Giovanni Battista Re, with Malta represented by President George Vella, Archbishop Charles J. Scicluna and Bishop Mario Grech.

Also in attendance were Maltese Minister for Foreign Affairs Carmelo Abela and the Malta Ambassador to the Vatican City State, Frank Zammit. Among the concelebrants were Archbishop Charles J. Scicluna, Bishop Mario Grech, the Prior General of the Augustinian Order Fr. Alejandro Moral Anton, and the Provincial of the Maltese Augustinian Province, Fr. Leslie Gatt.

At the end of the celebration, Pope Francis incensed the coffin and said the benediction.

In his homily, Cardinal Re said that Grech always made God a priority. He said that Grech was a religious man, of deep spirituality, a man who loved the Church and religious life. He said that on the day of his death, Grech had had lunch among the Augustinian community in Rome, recounting stories in his affable manner, and just a few hours later, God called him to go and join him. He said that although he was 94 years old, it was a sudden death, but one Grech was not unprepared for.

Re said that central to Grech’s life was the learning and teaching of theology, first in Malta and then at universities in England and Rome.

He went on to say that apart from a life dedicated to studying and teaching, Grech always found time for pastoral work at the Chapel of Santa Monica in Rome, including hearing confessions.

With the death of Cardinal Grech, the College of Cardinals now has 223 cardinals, 124 of them eligible to vote to elect a new Pope and 99 other non-voters (over the age of 80).

“Present The Gospel Without Shortcuts, Without Diluting The Word”

Although he was already over 80 and therefore ineligible to vote in the conclave to elect a successor to Pope Benedict XVI in March 2013, the cardinals chose Cardinal Prospero Grech to give the first meditation inside the Sistine Chapel when they gathered for the election.

The Church is called to proclaim the kingdom of God and the Good News of salvation through Christ, he told his fellow cardinals.

“The Church does this by presenting the Gospel without shortcuts, without diluting the word,” Grech said.

Listing threats to the Catholic Church, the cardinal cited a general lack of understanding of Church teaching, but he also saw a gathering storm. “Between ultra-traditionalist extremists and ultra-progressive extremists… there always will be the risk of small schisms that not only damage the Church but go against the will of God,” he said.

The Church’s mission is also threatened by the evil and criminal behavior of some of its members, especially priests, he had said.

In facing the clerical sexual abuse crisis, “the Church must humble itself before God and men and try to uproot the evil at any cost.”

“Today many people are not able to come to believe in Christ because his face is obscured or hidden behind an institution that lacks transparency,” he told the cardinals. The cardinals soon after entered the Conclave. (NCR)