Raphael and his friends from Urbino

Raphael and his friends from Urbino

As there were many exhibitions worldwide in 2019 to celebrate the 500th anniversary of Leonardo Da Vinci’s death, 2020 will be Raphael’s turn. The “dio mortale,” as biographer Vasari nicknamed him, was born in the small central Italian city of Urbino in the Marches region, on March 28 or April 6, 1483 and died in Rome on April 6, 1520.

According to Vasari, Raphael’s career falls naturally into three phases and three styles: his early years in Umbria working with Perugino and Pinturicchio; then a period of about four years (1504-1508) absorbing the artistic traditions of Florence from Leonardo, followed by his last hectic and triumphant 12 years in Rome working for Popes Julius II and Leo X and their close associates.

The first Raphael-celebrative exhibition to open, “Raphael and His Friends in Urbino,” is on until January 19 in the Galleria Nazionale delle Marche, housed in the Ducal Palace, where Raphael’s father, Giovanni Santi, was the court painter to the very cultured Duke Federico da Montefeltro. It concentrates for the first time on Raphael’s early life and career before he left Urbino for Umbria and the lifetime friends he made in this leading Renaissance court-city. Particularly important and featured here were older Timoteo Viti (Urbino 1469-Urbino 1523) and Girolamo Genga (near Urbino 1476-near Urbino 1551), who also intersected with Raphael’s Florentine and early Roman period as the exhibition demonstrates.

Raphael’s mother, Màgia, died in 1491, when Raphael was eight. His father soon remarried but died on August 1, 1494. During those three intervening years, Raphael, according to Vasari, was “a great help to his father,” who recognized his son’s talent and placed him in the workshop of the Umbrian master Pietro Perugino.

An alternative theory is that Raphael’s formal guardian, his paternal uncle Bartolomeo, a priest, did not apprentice him to Perugino until around 1500, but that Raphael stayed in Urbino where he studied with Timoteo Viti, who had replaced Giovanni Santi as court painter, and that he managed his father’s workshop with his stepmother. Raphael and Viti worked together again from around 1514, when, according to Wikipedia, “Viti formed part of the large team assembled by Raphael and worked on the frescoes Raphael designed in the Chigi Chapel in Santa Maria della Pace in Rome. It has been suggested that Viti is depicted (as the Ancient Greek painter Protogenes) in Raphael’s fresco The School of Athens, standing next to Raphael’s self-portrait, although Vasari does not mention this identification.” It’s also said that Viti “inherited the most important group of Raphael’s studio drawings,” continues Wikipedia, “which his descendants sold to [the French self-made financier/art collector] Pierre Crozat in the 17th century. Drawings have often been disputed between the two artists in the past, and Viti has also been accused of forging some Raphael drawings (though it seems now accepted this was someone else).”

Of the some 80 artworks on display in Urbino, many drawings and 19 paintings are by Raphael; the others are by Giovanni Santi, Viti, Genga, Signorelli, Perugino, Fra Bartolomeo, Domenico Beccafumi, Domenico Alfani, Francesco Francia, Pinturicchio, Lorenzo Costa, Raffaellino del Colle, and Giulio Romano. The exhibition’s six sections are displayed in chronological order. 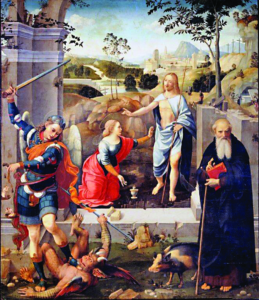 Noli me Tangere by Timoteo Viti, from the Church of Sant’Angelo Minore in Cagli, Italy

The first of these is entitled Urbino at the End of the 15th Century: Young Raphael and Timoteo Viti’s Debut. On display here are Raphael’s Coronation of the Virgin or Oddi Altarpiece (1502-4) that he painted while in Perugia in direct comparison with Pinturicchio’s, both now in the Vatican; Portrait of Elisabetta Gonzaga (c.1504) from the Uffizi; Madonna and Child with Sts. Jerome and Francis (1502) from the Gemäldegalerie in Berlin, and St. Catherine of Alexandria and its recto (1508) from Urbino with her pose echoing that of Raphael’s Mary Magdalene in the Alana Collection in Newark, Delaware, and of Leonardo’s Leda. Here it’s clear the Madonna and portraits of women are Raphael’s favorite subject. 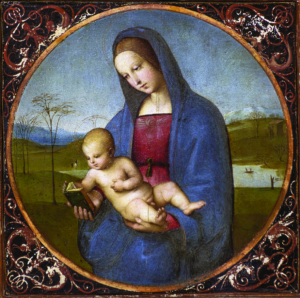 Madonna Conestabile (1504) from The Hermitage. Russian Tsar Alexander II acquired the painting from the Conestabile family of Perugia in 1871.

In the second room, Raphael and Girolamo Genga between Florence and Siena, are Raphael’s Madonna Conestabile (1504) on loan from The Hermitage and likely his last work painted in Umbria before going to Florence; his La Gravida (Pregnant Woman, 1505/6), an unusual subject for the Renaissance, from Florence’s Pitti Palace, showing the influence of Ghirlandaio; and two Madonnas (1506) from Vienna’s Kunsthistorische Museum and from the Uffizi, painted in Florence but still with his soft Umbrian colors.

The third room, The Routes of Raphael and Genga in the Second Decade, includes Raphael’s precocious but badly damaged Madonna Mackintosh from London’s National Gallery (c. 1509, at the early stage of his Roman stay at the same time Raphael was frescoing the Room of the Segnatura, but still similar in style to his Florentine works), and the Madonna Aldobrandini (1510), which reflects the impact of Michelangelo’s Sistine Chapel’s ceiling on Raphael, also from London’s National Gallery. 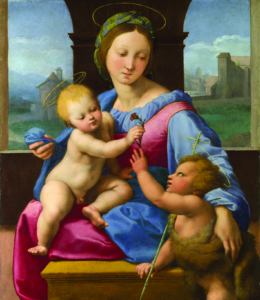 The fourth room, Two Fragments of Raphael’s Works in Julius II’s and Leo X’s Rome, refer to his and Viti’s frescoes for the Chigi Chapel in Santa Maria della Pace (1510-11) and his cartoon for the scenes in the Room of Heliodorus (1514) where God’s apparition to Moses as the burning bush reflects Raphael’s impressive progress thanks to the inspiration from his recent contact with ancient sculpture and Michelangelo’s frescoes in the Vatican. 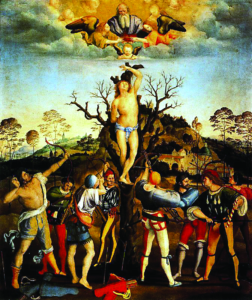 Martyrdom of Saint Sebastian by Girolamo Genga, (1500-1510) from the Uffizi Gallery in Florence.

The fifth room, Genga’s Works in Romagna and Viti’s Epilogue in Urbino, illustrates how little Viti’s late paintings were influenced by the novelties he’d encountered in Rome. Instead, after Genga moved to Romagna, his works took off from his Florentine experience, where he’d worked with Fra Bartolomeo and Raphael.

The sixth room, After Raphael, concerns Genga’s move from Cesena to Rome where he worked with Giulio Romano. Here his style continued to improve so greatly, thanks to his collection of drawings by Raphael, that younger artists from all over Italy and Europe came to study with him. On display is the impressive cartoon for his and Giulio Romano’s Stoning of St. Stephen.

In addition to Urbino, Raphael will be spotlighted in many other places in 2020. In anticipation of these celebrations, the large-scale cartoon for the Vatican fresco The School of Athens (1509) was recently conserved and has been on display in Milan’s Ambrosiana since March 2019. Elsewhere in Italy, the most important of these anniversary exhibitions will be at Rome’s Scuderie del Quirinale March 5-June 14, 2020 in collaboration with the Uffizi in Florence which will provide the backbone loans: Raphael’s 1504-6 self-portrait (painted while in his early 20s), a pair of portraits of Agnolo and Maddalena Doni (c. 1504) and the Goldfinch Madonna (c. 1506), also on display in Urbino.

Outside Italy, London’s National Gallery, the owner of 11 Raphaels, is expected to hold an anniversary show as is the Victoria and Albert Museum to highlight its permanent display of its seven huge Raphael tapestry cartoons of St. Peter and St. Paul. Even if the Louvre is not planning an anniversary show for Raphael like the one there now dedicated to Leonardo, it will host an Italian Renaissance show, Body and Soul: Sculpture in Italy from Donatello to Michelangelo 1460-1520.

On in the United States at the National Gallery in Washington D.C. from February 16-June 14, 2020 will be Raphael and his Circle. The exhibition will feature four drawings by Raphael: the sheet from which the design of his painting Saint George and the Dragon was transferred; the cartoon for the so-called Belle Jardinière (1507), also known as The Virgin and Child with Baby St. John the Baptist on loan from the Louvre; a detailed representation of the prophets Hosea and Jonah; and a well-known study for part of the frescoes in the Church of Santa Maria della Pace in Rome. Moreover, the Gallery’s five paintings, including Saint George and the Dragon — the largest and most important group of Raphaels outside the Vatican Museums with 12, London’s National Gallery’s 11 and the Louvre with eight — all dating from the central decade of his activity, will also be on view.