Russian Ambassador: “The Vatican is the most stable state in Europe”

Russian Ambassador: “The Vatican is the most stable state in Europe”

An interview with ALEKSANDR AVDEEV, representative of the Russian Federation to the Holy See. Ten years after the establishment of full diplomatic relations between Moscow and the Vatican: “The Pope and Putin have touched on substantial subjects. I think there is also a personal sympathy” 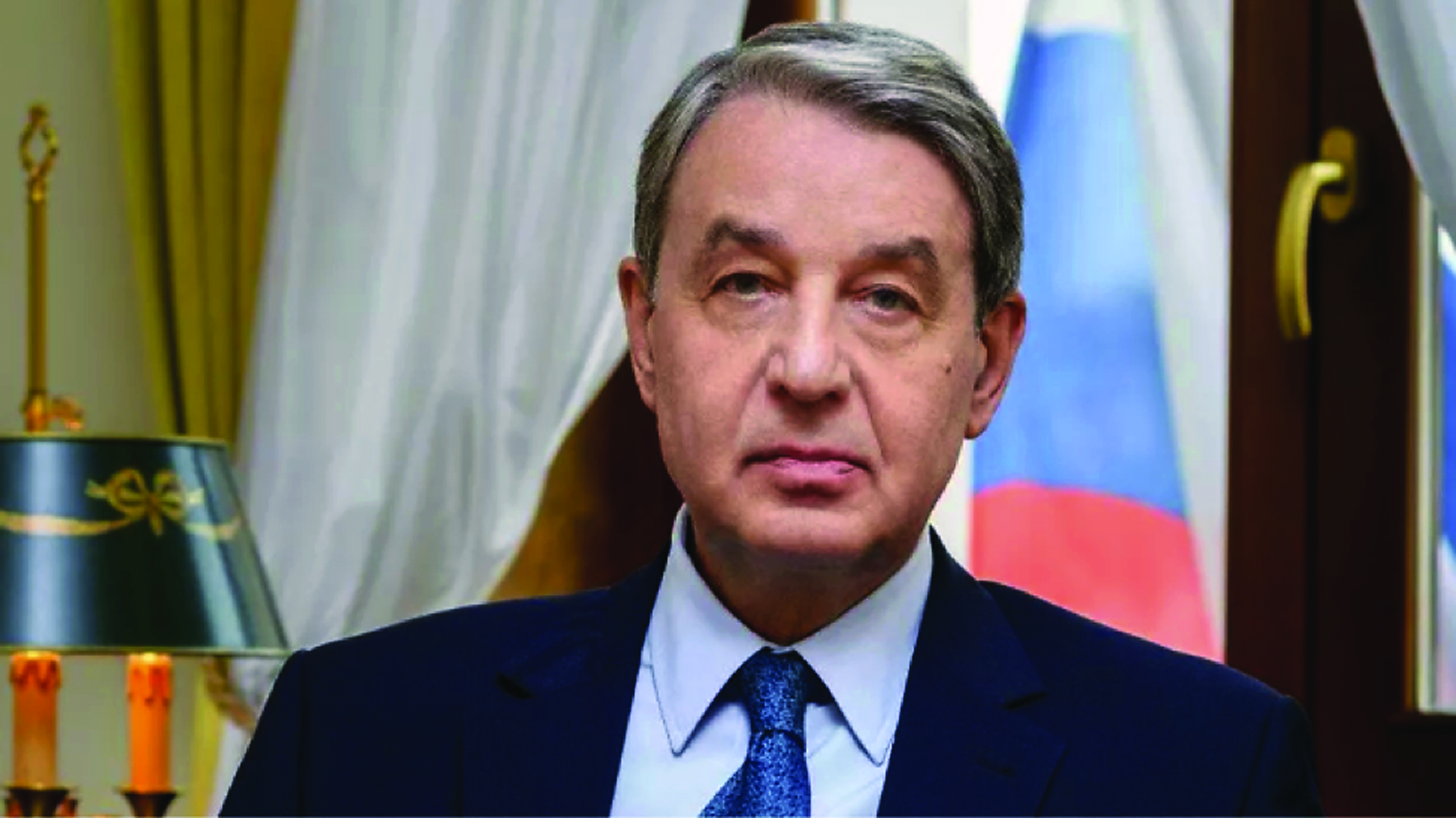 Aleksandr Avdeev, ambassador of the Russian Federation to the Holy See, held the role of Minister of Culture for his country from 2008 to 2012.

“The world has become less predictable. The most unpredictable region has become Europe. And in Europe the most stable country seems to me the Vatican.” This is how Aleksandr Avdeev, ambassador of the Russian Federation to the Holy See, commented on geopolitical current affairs in this January 2020 interview. A long-term diplomat, the ambassador held the role of Minister of Culture for his country from 2008 to 2012. And now he continues to express analysis and judgments that are not taken for granted on geopolitical scenarios even from the Eternal City, where he takes care of relations between Moscow and the Roman palaces of the Holy See.

Ambassador Avdeev, has Europe become an enigma for you too?

Ambassador Avdeev: Now, it is still possible to make predictions on how the situation will be in Africa or Asia ten years from now, while in Europe we do not know what the fate of the European Union will be, nor the future of transatlantic relations, nor of commercial ones. Everything is in the storm. Brexit, nationalisms, social conflicts in France… I really think that one of the most stable countries in Europe is the Vatican State!

The first ten years of full diplomatic relations between the Holy See and Russia have just been celebrated. What were the most important moments of this journey?

These ten years have been a happy time for the fruitful development of relations between the Russian Federation and the Holy See.And this development is based on affinity, on the sharing of the view expressed by Russia and the Holy See on the facts and problems of the world.

On what factors is the convergence you refer to based?

I think first of all that the Holy See is interested, like Russia, in the stability of the world based on cooperation. There is a shared concern about the situation in the Middle East, especially in Syria. And we are on the same wavelength as regards the need to resolve conflicts on the basis of international law. Now, for example, sanctions are in fashion. The United States also imposes them against its own allies. And also on this, the Holy See said, with a responsible voice, that the sanctions must comply with the statutes of the United Nations and must be authorized by the UN Security Council.

As a diplomat and scholar of international politics, how would you define the presence and contribution of the Holy See to international scenarios in the current historical phase?

I want to underline primarily the appeals of the Pope and the Holy See to save Christians in the Middle East, especially in Syria, where before the conflict the baptized represented more than 18% of the population, and now they have become 1% — a real biblical exodus. The Pope and Patriarch Kirill also spoke about it in the joint document they signed in their historic meeting in Havana.

Putin is the global leader who visited the Pope on several occasions after Merkel. Is this preference just a matter of good manners and geopolitical strategy?

In their conversations, the Pope and Putin touched on substantial matters. I believe there is also a personal sympathy. They also talked about how Christian values can be effectively preserved, which risk being diluted in the context of the savage globalism in which we live, and in the climate of dominant pseudo-liberalism, which cancels social duties and enhances the limitless pursuit of one’s own instinctive drives and subjective interests. Pseudo-liberalism is also an enemy of authentic liberalism, and now it also uses the internet and social media as tools for flattening and homologization. People are fragile; they do not have the stability and consistency that is absorbed over time, in the network of authentic family and social relationships.

How do you define Pope Francis’ modus operandi with respect to geopolitical processes? Realist? Idealist? Conservative?

Pope Francis is a global leader, by given circumstances. In the world there are 1 billion, 300 million Catholics — it is the largest community of believers on the planet, which finds in the Pope its one reference point. Pope Francis exercises this role on international scenarios by working for peace.And he also does this by promoting interreligious dialogue and ecumenical dialogue with other Christians. He made an important contribution to fraternal relations with all the other Christian Churches and communities. And the relationship he has built with Muslims, both with Shiites and Sunnis, seems very important to me. It has helped everyone to understand that dialogue between religious traditions can be a factor of stability and peace, especially in this time when religions have gained public relevance. Mostly, it helped everyone to understand that only dialogue between religious traditions can definitively overcome the violence that tries to justify itself with religious motivations. I consider it formidable that the Islamic leaders, in the documents signed together with Pope Francis, such as the Abu Dhabi Document, have affirmed that they and their governments have a duty to defend the Christians with whom they live in their countries from violence.

You spoke of the harmony between Putin and Francis. Yet there are political leaders who express their antipathy for the Pope, while taking Putin and Russia as a model and reference point. How do you explain this contradiction? 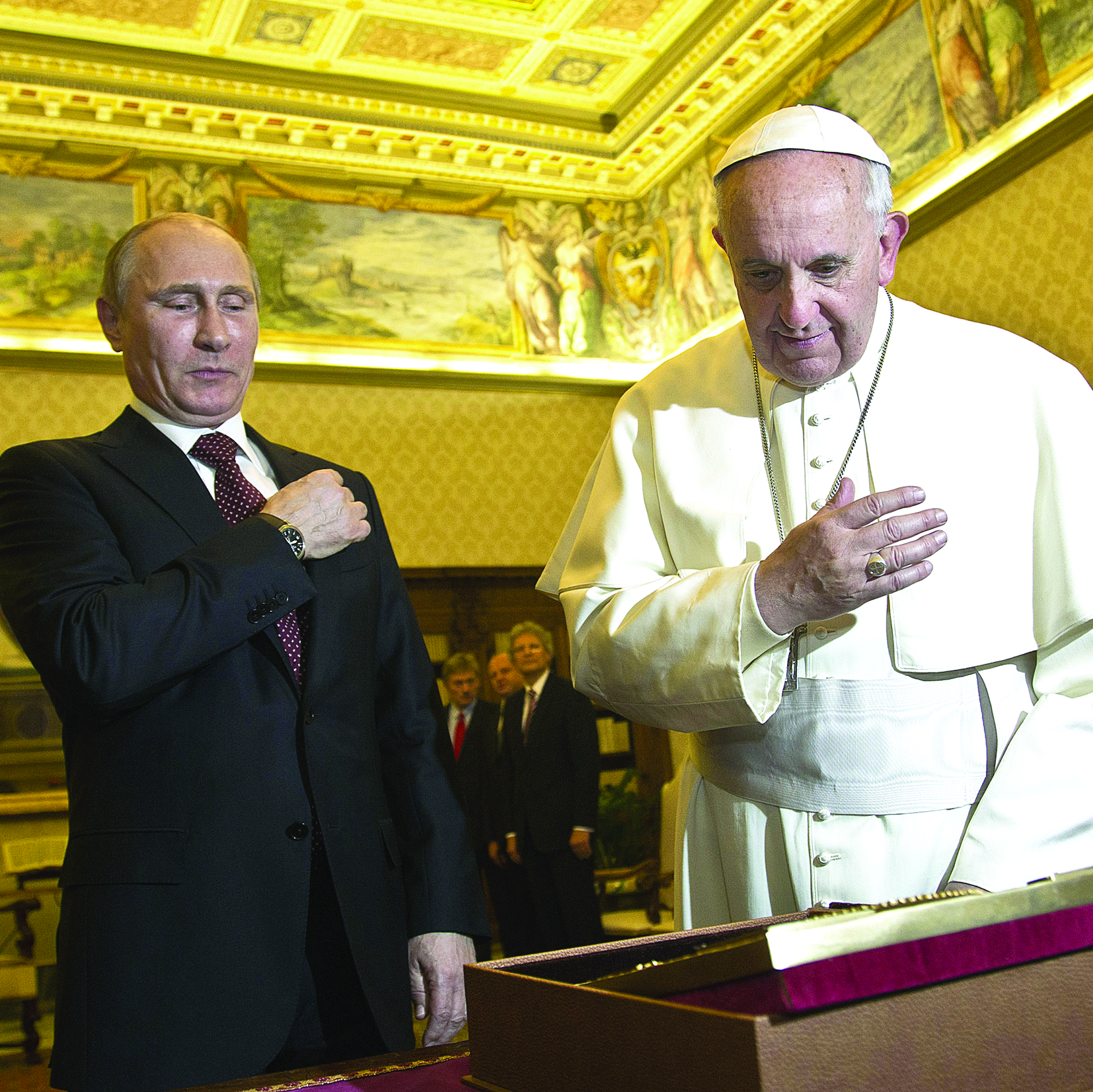 November 25, 2013, at the Vatican. Pope Francis and Russian President Vladimir Vladimirovi Putin during the exchange of gifts in the Private Library of the Apostolic Palace

These are superficial positions. Obviously, the Vatican is in a more complicated position than, for example, the Russian Church. The Vatican is also a state, and therefore must always move on two levels, the spiritual-religious one and the political-diplomatic one, harmonizing initiatives and positions in the two different areas. I believe that the Holy See is carrying out this agreement successfully and with good results.

Russia has taken on a key role in the Middle East. Many analysts say it has filled the space left empty by the US, and add that in the Middle East the US wanted to spread democracy, while Russia supports oppressive regimes. Does this reading of the situation convince you?

This is a deformed representation.

Syria, like it or not with its current government, is a UN member nation, and has its own head of state; it has a sovereign government.

The Russians now present in Syria have been invited by the Syrian government, while the US, even now, is illegitimately in Syria. They say they want to bring democracy. So why did they intervene only in Syria, and not in other countries of that region? How many nations in that area of the world can give democracy lessons to Syria?

Do the criticisms of those who accuse Russia of forming alliances with authoritarian regimes really have no basis?

Russia supports the democratic stabilization of Syria. With the support of the United Nations, it has fostered dialogue between the various Syrian political forces and the creation of the Commission for the drafting of the new Constitution. Then there will be the elections, which will show who is supported by the people. This is the normal way to walk towards democracy.

Russia has direct and usually good relations with all the nations of the Middle East, often opposed to each other: Turkey, Iran, Arabia, Israel… What design and what interests inspire this strategy?

It is true, we have open channels with all the actors of the Middle East. Even on this, it seems to me that Russia follows the same inspiration that guides the Holy See: it is always necessary to dialogue with everyone, and through dialogue to develop relations, security, stability. Putin has said many times that Russian forces will leave Syria when stability is assured and when there is a specific request from the Syrian authorities.

There are divisions between the Orthodox Churches, which also affect the ecumenical journey with the Church of Rome. What effects do they have on the relationship between Russia and the Holy See?

A great sin in Christianity is the politicization of the Churches. The parallel Church created in Ukraine arose at the request of former President Petro Poroshenko, who later lost the election. This does not correspond to the Orthodox rules. We are happy with the wise position taken by Pope Francis, who has not intervened in ecclesial controversies, and also, on the conflict in Donbass, has expressed the desire that the crisis be resolved peacefully, through dialogue.

How is the sensitivity of the Pope and the Holy See regarding the ecological issue and the protection of creation viewed in Russia?

Pope Francis’ encyclical on safeguarding the “common home” is a fundamental document of this time. If the environment is not protected in the first place, if the world is devastated, humanity will become extinct, and then there will no longer be anyone to put into practice the Ten Commandments and the precepts of the Gospel. For this reason, the safeguarding of Creation is like an “eleventh” Commandment, a pre-condition for every journey of spiritual conversion.

And on the issue of migratory flows, another phenomenon constantly at the center of the Pope’s preaching — how is his attention to this viewed in Russia?

We are a country that receives refugees and migrants. We welcomed 3 million Ukrainians. We understand that Pope Francis’ appeals are based on his gaze always turned to the same experience of the Child Jesus, when the Holy Family lived the flight to Egypt. For many, including Christians who flee wars and persecutions, Europe is like a promised land. Welcoming, in those cases, is a moral obligation. Then there are migrants for economic reasons, who often pay human traffickers, whose network is organized by criminals. The Pope and the Holy See, on this phenomenon of migration, are following a criterion of realism, also inviting people to go and invest economically in the countries where economic migrants come from.

Is the next meeting between Pope Francis and Patriarch Kirill imminent? 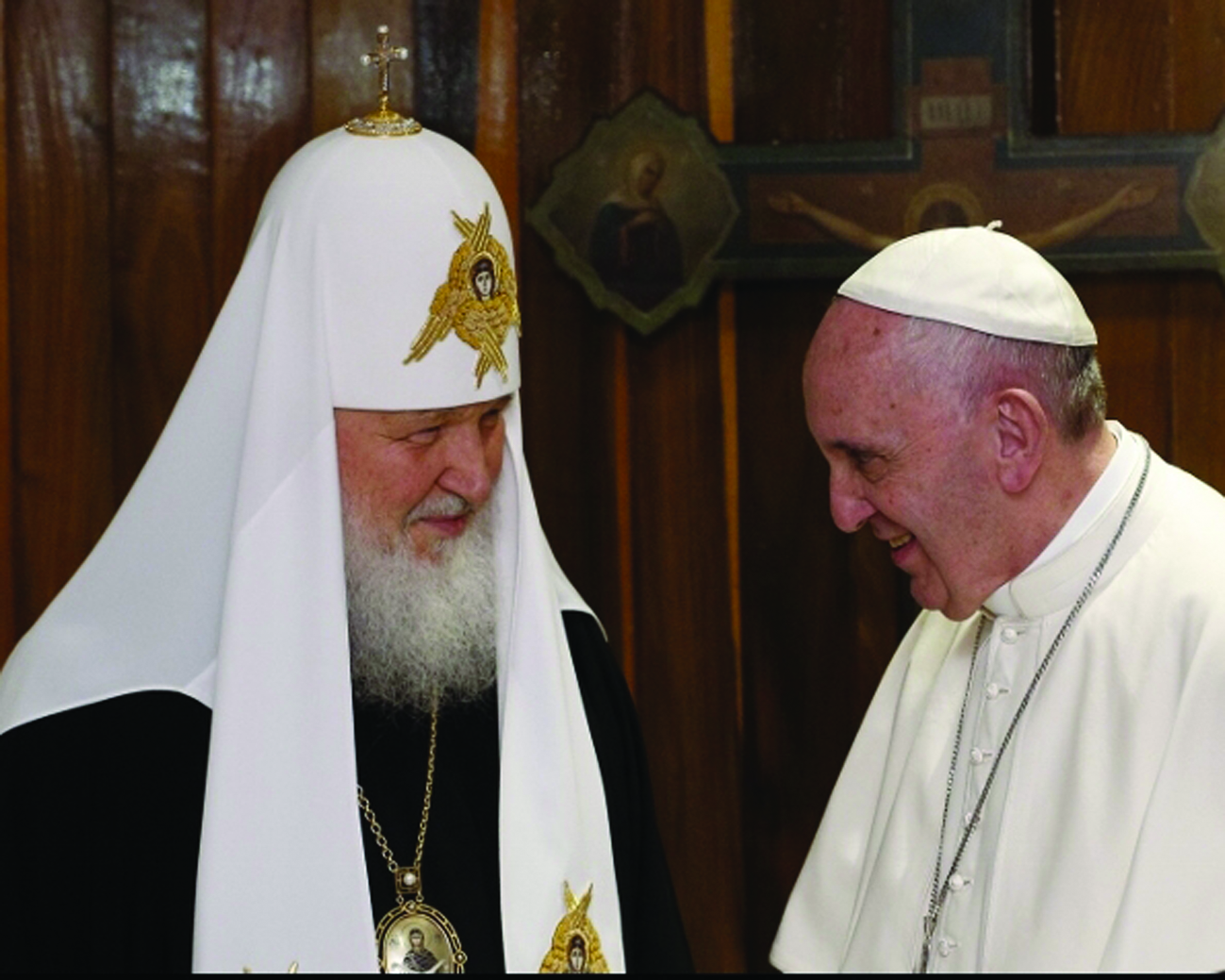 The Pope and Patriarch Kirill during their 2016 meeting in Havana

For now, we are preparing moments of celebration for the fourth anniversary of the meeting between Kirill and Francis in Havana [on February 12, 2016].

There was talk of a possible meeting between the Bishop of Rome and the Patriarch of Moscow in Kazakhstan, on the occasion of one of the interreligious meetings periodically organized in Astana by the Kazakh government. Would that be a propitious circumstance?

I read about this hypothesis in the press of Kazakhstan and in Italy. I can only add that every possible development and every new step in relationships is very precious.

Some no longer consider the possibility of a Pope’s trip to China unrealistic. Will the Pope go to Beijing before he goes to Moscow?

Orthodox Christians in Russia are happy that the situation of Christians in China is gradually normalizing, and that the Chinese government looks favorably on this process. Patriarch Kirill visited China a few years ago and also met with Chinese President Xi Jinping. I myself, on that occasion, communicated to the Holy See that Kirill’s visit was the visit of a Christian, representing all Christians. He took the first step, and that step was taken to encourage and open paths.