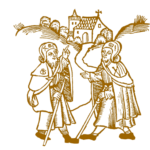 Who is this humble Capuchin from Manoppello, Italy, and how have I come to know of him? This journey began in 2006, when my son Joseph and I went for the first time to see the holy “resurrection veil” of Jesus Christ, known as the Volto Santo (“Holy Face”). The veil is an extremely fine cloth, woven out of marine byssus (a silky filament harvested from certain sea mollusks), and bearing the image of Jesus; it shows a countenance with facial wounds still just beginning to heal, yet there is a gentleness in His eyes that affects many who come before this image of Our Lord.

Transparent in certain lighting, this delicate cloth is impossible to be painted, as confirmed by Chiara Vigo, the renowned expert on marine byssus from Sardinia. This particular veil can be traced back historically to the Sack of Rome, along with earlier icons or religious paintings showing the image on a veil with the eyes of Jesus open, possibly reflecting the moment of His Resurrection.

History speaks of this image being carried in procession from the Vatican to the Church of Santo Spirito in Sassia, Rome, by Pope Innocent III in 1208. This is also thought to be the cloth which is spoken of by John (20:6-8). When he and Peter “saw the strips of linen lying there, as well as the cloth that had been wrapped around Jesus’ head,” John was able to say that “he saw and believed.”

For some time, I had been a devotee of St. Padre Pio, visiting his shrine at San Giovanni Rotondo several times, and participating in the February 2016 procession of his body to St. Peter’s for the Jubilee Year of Mercy. But I was unfamiliar with the life of Padre Domenico da Cese, whom Padre Pio called a “spiritual son.” That was all about to change.

In 2018, while watching a program entitled, “The Long Road of Fr. Domenico: From Cese to Turin,” I saw footage of Padre Domenico de Cese as the first person ever caught on film during a bilocation: he was participating in Padre Pio’s funeral procession on September 26, 1968, while also still in Manoppello.

I wanted to know more. So, on a pilgrimage to Manoppello in October 2018, I sought further information, and was referred to Sr. Petra-Maria Steiner, who wrote the book, Servant of God Padre Domenico da Cese, O.F.M. Capuchin: An Illustrated Biography. I purchased the Italian-language book and Sr. Petra-Maria and I soon met; I eventually helped her to publish her book on this extraordinary Capuchin in English.

Padre Domenico da Cese was born Emidio Petracca on March 27, 1905; his parents were Caterina and Giovanni. By the age of 4, little Emidio was diagnosed with infantile paralysis. His mother took him to the local church, placed him on the altar of the Blessed Mother and desperately prayed; miraculously, Emidio began to move his legs and feet. From that moment on, Mary the Mother of God would continue to be at his side in a special way.

The day before the 7.0 magnitude earthquake that struck the Abruzzi area, killing 30,000 people, on January 13, 1915, 9-year-old Emidio predicted it — but who would ever listen to a child? In the family home, his mother was saved by a beam which became lodged safely; his two younger sisters, Elisa and Lauretta, were killed. Emidio and his father were trapped beneath the rubble of the church, when a “stranger” later pulled them out. It would not be until many years later that Emidio would come “face to face” with that stranger again.

A couple of years later, the Capuchins came to Cese for a mission, and the 12-year-old Emidio knew immediately that he wanted to become one. His father was firmly against it, but Our Lord told Emidio to ask for permission again; if he was permitted, then the family would be granted more children to take his place. His father finally agreed, and shortly after that Elisa, Mario and Angelo were born into the family.

Emidio entered the seminary in 1921, at the “Collegio Serafico” in Vasto. Then, in 1922, he went to the novitiate in Penne (where he chose the name Domenico) followed by studies in L’Aquila. He was then sent to Florence for military service as a paramedic. In Sulmona, on the feast of the Divine Motherhood of Mary, October 11, 1931, he was ordained a priest by Bishop Nicola Iezzoni.

Padre Domenico went to see Padre Pio in November 1940, at which time Padre Pio exclaimed, “Finally I have the honor to see a military chaplain with the cassock!” Soon his military duties sent him to various locations, where he witnessed the tragedies of war. While in Dubrovnik, on October 18, 1941, something miraculous occurred in the presence of a Mr. and Mrs. Basso: after Padre Domenico prayed the Divine Office prayers, his crucifix began to bleed warm red blood from the wounds of the cross. This crucifix is kept in the archives of the Capuchin Fathers in Manoppello.

Padre Domenico endured numerous trials: in October 1941, he wrote to his provincial of his extremely high fevers, migraines, swollen legs, “open wounds on his feet,” and lack of sleep, among other physical complaints. Later, he suffered the envy and jealousy of some of his brothers for his “radicalism”: he offered all for Jesus to save souls. He was sent to Luco dei Marsi, Trasacco, Campli and Caramanico Terme before finally being transferred to Manoppello — places in which he had many spiritual children who came to him for his counseling and blessing, as he was known also for his spiritual gifts, including reading souls. Padre Pio used to tell pilgrims, “Why do you not go to Padre Domenico in the Abruzzi and save the trip? He is just like me!” according to the testimony of Clarice Marchionni.

The “Apostle of the Holy Face” 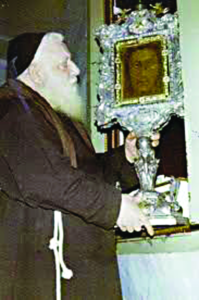 Padre Domenico da Cese, the “Apostle of the Holy Face” of Manoppello, with the image of a bruised man who is just opening his eyes

When Padre Domenico first arrived in Manoppello in 1966 and saw the Volto Santo, he immediately recognized it as the face of the “stranger” who had pulled him from the rubble of the church in Cese in 1915! But what was the exact nature of this relic that he used to refer to as a “spider web” due to its sheerness? He became utterly devoted to the Holy Face on the cloth, and his devotion was such that he asked his superiors to allow him to remain permanently assigned to the shrine in Manoppello, a request which was granted.

Padre Domenico realized that the face of Jesus on the cloth is not that of a dead person, but of someone alive. He began research, comparing the cloth, on which there were absolutely no traces of either blood or paint, with pictures of the Shroud of Turin, concluding that one (the Shroud) was the image of a dead man, and the other (the Volto Santo) of a man who was alive — and both of the same person. (Sophisticated scientific research carried out by Italian scientists as recently as January 2019 has, in fact, confirmed that the two images overlap very well.)

Padre Domenico eventually became the first Apostle of the Volto Santo, and in this capacity he also led pilgrimage tours of the Shrine in Manoppello. It was during one of these tours, in 1968, that he reportedly bilocated: witnesses confirm that he led the tour, but he was also seen by multiple witnesses, at the very same time, attending the funeral of Padre Pio himself at San Giovanni Rotondo, 2 1⁄2 hours away by car. Later, he organized a major exhibition of the Holy Face in Pescara, Italy, for the 19th National Eucharistic Congress in 1977.

As predicted by Padre Domenico himself, he was struck by a speeding Fiat 500 in Turin, on the evening of September 13, 1978, after spending time before the Shroud; he was knocked to the ground and hit his head on a curb. (At the same time, a 16-year-old girl, Elisabetta Venditti of Pescara, rushed to her mother, a spiritual daughter of Padre Domenico, saying she dreamt of Padre Domenico falling to the ground covered in blood.) Padre Domenico forgave the driver of the car, and around 10:30 p.m. on September 17, he passed away peacefully.

In Sr. Petra-Maria’s research, she discovered photos which show the wounds of the stigmata in his hands. Is that also what Padre Pio meant when he told others to go to Padre Domenico because “he is just like me?!”

The canonical process for the recognition of his holiness by the Church was opened by the Holy See in 2013, and in 2015, Padre Domenico da Cese was declared a “Servant of God.”