The helicopter carrying Pope Benedict XVI flies past St. Peter’s Basilica as it leaves the Vatican for Castel Gandolfo, Italy, February 28, 2013. “I am a simple pilgrim who begins the last stage of his pilgrimage on this earth,” the Pope said at the close of his papacy (CNS photo/Alessandro Bianchi, Reuters)

When Pope Emeritus Benedict XVI resigned seven years ago, in February of 2013, it caused a sensation — both inside and outside the Church. Catholics of every age, never having witnessed a papal resignation, were stunned; while many in the media seized the unexpected moment to assailBenedict’s orthodoxy (yet again), and campaign for a more “modern” Pope.

As reality set in, concerned Catholics wondered aloud what the transition would mean for the stability and authority of the papacy. Their anxieties were only heightened when dissident Catholics envisioned a radical new post-Benedict era, which would usher in a “Catholic revolution.”

Perhaps the calmest, and most sensible, statement made at the time, came from the Metropolitan Archbishop of Lagos, Alfred Adewale Martins: “We do not have this sort of event happening every day. But at the same time, we know that the Code of Canon Law promulgated in 1983 makes provision for the resignation of the Pope, if he becomes incapacitated or, as with Benedict XVI, if he believes he is no longer able to effectively carry out his official functions as head of the Roman Catholic Church due to a decline in his physical ability. This is not the first time that a Pope has resigned. In fact, we have now had no less than three, including Pope Celestine V in 1294 and Pope Gregory XII in 1415. Pope Benedict XVI was not forced into taking this decision.As he said in his own words, he acted with ‘full freedom,’ being conscious of the deep spiritual implication of his action… By his decision, the Holy Father has acted gallantly and as such we must commend and respect his decision.”

Thankfully, most Catholics have; just as they joyfully welcomed the election of Pope Francis, as the new Vicar of Christ, on March 13, 2013.

Since then, however, even though he is no longer Pope, Joseph Ratzinger’slife has been anything but uneventful.

He continues to grant occasional interviews; published a powerful reflection on the roots of the abuse crisis; contributed an elegant essay to Cardinal Sarah’s book defending priestly celibacy.

And, just recently, issued a series of striking warnings against relativism and political correctness, for a new authorized biography of himself, by long-time German collaborator, Peter Seewald. (Entitled, Benedict XVI: A Life, it is a two-volume work, exceeding 1,000 pages. The first part will be published in English this fall, after which ITV will review and discuss it at length).

Among the statements Pope Emeritus made — provoking headlines throughout the world — were these:

“A century ago, anyone would have thought it absurd to talk about homosexual marriage.

“Today, those who oppose it are excommunicated from society.

“It’s the same thing with abortion and creating human life in the laboratory. It was only natural for people to fear the spiritual power of the anti-Christ.

“The real threat to the Church… is in the global dictatorship of purportedly humanist ideologies.”

Not surprisingly, these declarations set off a firestorm of criticism against the former Pontiff, especially among the liberal intelligentsia. But his comments were hailed by the Catholic faithful, not to mention many others who embrace the Judeo-Christian heritage.

As Melanie McDonagh, one of Great Britain’s most respected commentators noted: “There is nothing untrue in his observation that the reaction to gay marriage a century ago would have been incomprehension; ditto the creation of new life in test tubes—as satirized in Aldous Huxley’s Brave New World. And these unprecedented developments are now sacrosanct, in the sense that is not now allowable, not socially acceptable, to suggest they are wrong and damaging. To take exception to these new norms result in a range of social censure, from online lynching to deselection as a candidate for political parties. These things used not to be specifically religious matters; they still aren’t, but it is now almost entirely religious people — Muslims as well as Catholics — who will articulate them.”

The heated reaction to the Pope Emeritus’ observations, concluded McDonagh, simply “proves his point: the humanist ideologies have taken over the culture, and it’s not a worldview that welcomes dissent.”

The former Pope’s detractors say that by speaking out so loudly, he has not only broken his promise to remain “silent” after he retired, but tried to upstage Francis, who is the real Pope and holds much more “enlightened” views. The critics are wrong on both counts.

To begin with, the Pope Emeritus never promised to remain “silent” after his resignation. What he said, in the final weeks of his papacy, is that he would resign as Pope and “serve the Holy Church of God in the future through a life of dedicated prayer;” that he would remain close to Catholics “even if I am hidden from the world;” and pledged his “unconditional reverence and obedience” to the new Pope — promises he has kept, and none of which are incompatible with periodic reflections and statements, sustained by a life of prayer, about the challenges faced by the Church. Furthermore, in his very last declaration as Pope, on February 28, 2013, Benedict XVI said he “would still — with my heart, with my love, with my prayers… and with all my inner strength, work for the common good and the good of the Church and humanity” — something that would obviously be impossible if he never penned or said another word after resigning.

Lest anyone doubt that the Pope Emeritus is acting in cooperation with Pope Francis, one need only point out that Francis himself, shortly after he became Pope, personally invited the freshly retired Pope Emeritus to cowrite Francis’first encyclical, Lumen Fidei, which highlights many classic Catholic teachings, and was broadcast throughout the world. 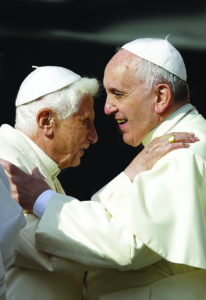 Pope Francis greets Pope Emeritus Benedict XVI during an encounter for the elderly in St. Peter’s Square at the Vatican September 28, 2014, a year and a half after the retired Pope’s resignation (CNS photo/Paul Haring)

As for Francis supposedly having more “enlightened” (read progressive) views than Benedict, that claim has been debunked repeatedly, notably by Professor Paul Kengor in a series of well-researched articles for Crisis and the National Catholic Register, documenting how both men have consistently and unequivocally denounced abortion, euthanasia, same-sex relations and gender ideology — to start the list.

It should also be noted that Francis repeated and endorsed his predecessor’s most famous statement after becoming Pope.

In an article entitled, “Francis Vows to Press Benedict’s Fight vs. ‘dictatorship of relativism,’” John Allen commented: “For those tempted to draw an overly sharp distinction between Pope Francis and his predecessor, the new Pope offered a clear reminder that [while] he may have a different style than Benedict XVI… on substance, he’s cut from much the same cloth.”

Given the fundamental principles Francis and the Pope Emeritus share, no one should depict the latter as any kind of threat or rival to the reigning pontiff.

Much less should they try to censor him.

In an appeal entitled, “Do Not Let a Brilliant Thinker Like Benedict Fall Silent,” Daniel Hitchens, the new editor of The Catholic Herald in London, wrote, “Many Catholics attribute their conversions, at least in part, to his meditative and sharp-witted writings; many non-Catholics have found in his work a cogent critique of modernity.”

For her part, McDonagh agrees.

The Pope Emeritus, she says, is “one of the most intelligent” men ever to sit on the throne of St. Peter — and also one of the bravest, for he “tells the truth as he sees it.” She continues: “In an age where emotional sincerity is more highly rated than intellectual integrity, this hasn’t made him popular. But popularity can be too dearly bought.”

Inside the Vatican looks forward to Seewald’s new biography on Pope Emeritus Benedict, and highlighting the lasting insights of his great pontificate.