A review of The Catholic Mass: Steps to Restore the Centrality of God by Bishop Athanasius Schneider 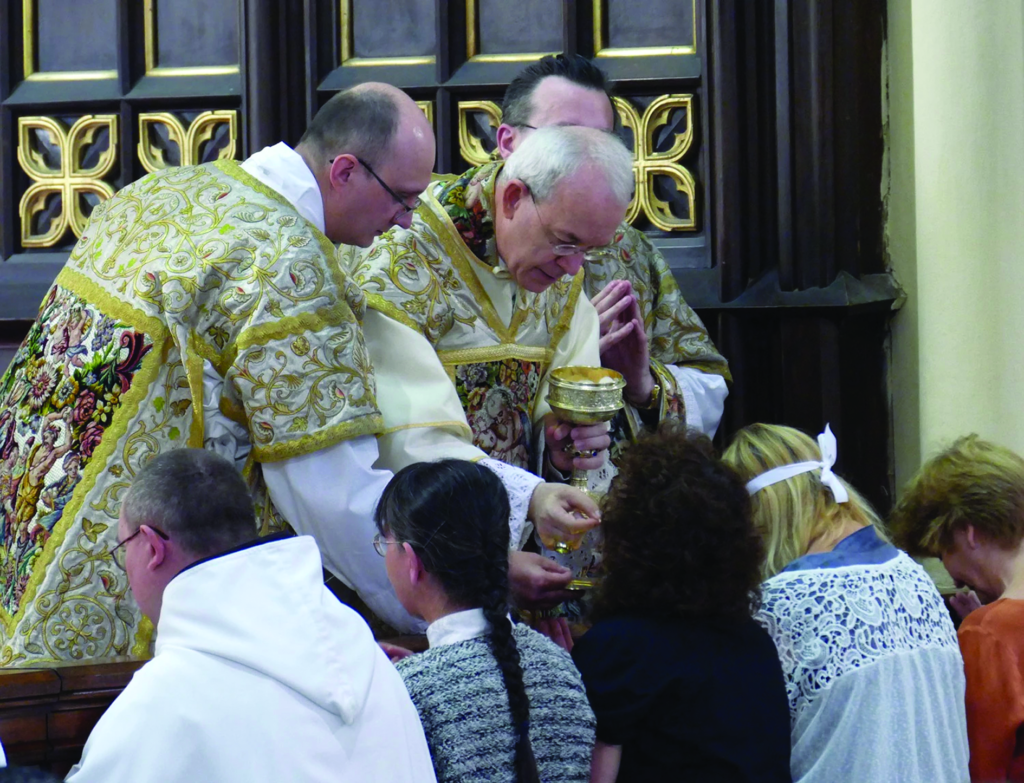 I became a Catholic in 1979 at the age of 19. Thus, I entered the Church in the fullness of her turmoil. Other than a few shards of memory from my girlhood in New Haven – a glimpse of habited nuns minding children in the schoolyard, young women at Albertus Magnus College wearing elegant sweater sets and trim skirts rather than the hippie garb favored by the new coeds at Yale, and a truly sensorially overwhelming stop for ashes with my best friend Gina at St. Mary’s — my inaugural experience of Catholicism was enmeshed with the resistance of my fiancé, making his way back to the faith, to lounge Masses and the bland liberalism of the local parish. In short, I had had no contact with any traditional idea of Catholicism in the liturgy. 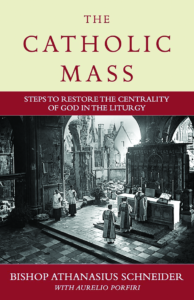 The Catholic Mass: Steps to Restore the Centrality of God in the Liturgy  (Sophia Institute Press $21.95)

When I read the first chapter of The Catholic Mass: Steps to Restore the Centrality of God in the Liturgy, I was struck by Bishop Athanasius Schneider’s identification of the abandonment of public Vespers and other liturgical celebrations of the Divine Office after the Second Vatican Council as an indicator of rupture in worship. This observation is so true and is part of my early experience of a void, of something missing.

Bishop Schneider speaks of the replacement of worship of God with a human-centered gathering, with the priest as a sort of master of ceremonies. When I finally took part in a sung Vespers at our parish, a lay-driven attempt at restoration, I was struck above all by the humble role of the priest. Normally the center of attention at Mass (in the Novus Ordo celebrated there), at Vespers he was simply praying with the people and then, in the ad orientem posture of Benediction, veiled with heavy vestments, he took his place at our head, facing in the same direction as we. How different this time of prayer was from our normal experience of his role – how potentially formative.

An elderly parishioner, now departed, reminisced about her youth in that little town. During the Great Depression, Vespers was celebrated every Wednesday evening at that same parish. After their shift at the factory across the street, “all the young people flocked to it! Afterwards we walked home with our friends, and it was the highlight of our week!” I mused on the effect of this pattern on their understanding of the liturgy. In The Catholic Mass, Bishop Schneider quotes Pope Benedict XVI: 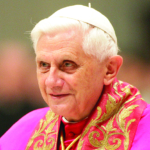 The Church’s existence draws its life from the proper celebration of the liturgy, and the Church is in danger when the primacy of God no longer appears in the liturgy and thus in life

Today our bishops show signs of being impressed by statistics indicating that Catholics have lost their understanding of these truths (according to one source, 70% do not believe in the Real Presence. I am not convinced, however, that our leaders grasp their responsibility for the crisis. As the primary mission of the Church ceases to be preached and lived by them, they grope for ways to convey what they themselves show no signs of believing. In their discussions at the most recent meeting of the United States Conference of Catholic Bishops (USCCB), they emerged with the usual response: statements and a plan of action that models itself on the multi-level marketing business scheme, featuring large conferences trickling down to small groups. They seem to have a mass movement in mind, vaguely modeled on what Stuart Chessman has called “features imported from the repertoire of the totalitarian states of the Eastern bloc (e.g., youth days and festivals; massive orchestrated public appearances.)” Naturally, such a plan requires a vast cadre of administrators to implement it, hence the resort to management systems. 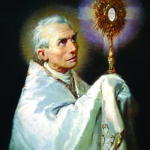 Without the Holy Eucharist, the world would be but an arid desert, a somber tomb; it would have the aspect of the Last Day, preceding the Last Judgement

In this way, the bishops condition ecclesiology, the Church’s understanding of herself and her mission. The Eucharist is a precious – the most precious – jewel we possess. Many in the pews have begun to recover the notion that this jewel must be placed in its proper setting. But there is another level: ecclesiology – how we contextualize the beauty we are trying to honor in the decisions we make, including decisions about how to pass it along to the next generation. The Motu Proprio Traditionis Custodes and the bishops’ general acquiescence to its unreasonable and contradictory demands undermines their pursuit of the goal of restoring knowledge of fundamental articles of faith.

What they miss entirely is the prerequisite for what they say they want, namely, the centrality of God in worship. They propose to tell us, the faithful, what to think about the Mass that they show no signs of wishing to make more radiant. Without the exercise of their authority, who can restore beauty to sanctuaries, return tabernacles to their rightful central locations, move clergy from the spotlight and turn them towards the East from whence the Savior will return, cleave to what clear instructions we have from Vatican II for the Novus Ordo regarding Latin and chant, and so on – all the necessary preconditions for recognizing the Real Presence? They are like a man who wants his children to draw near to their mother, whom he himself has not treated with respect. 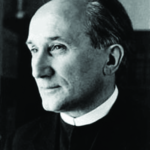 The liturgy is the Church’s public and lawful act of worship, conducted by the officials whom the Church herself has designated for the post — her priests

The Mass is primarily, first and foremost, worship of God. This truth, explored in The Catholic Mass at length and with ample support from Scripture, the Magisterium, and Tradition, is one that is nearly forgotten in the new ecclesiology, which emphasizes the communal and social participation of the faithful. When I give a talk on liturgy, I often relish the confused, even stricken, silence after I read this passage from Romano Guardini’s Spirit of the Liturgy:

The primary and exclusive aim of the liturgy is not the expression of the individual’s reverence and worship for God. It is not even concerned with the awakening, formation, and sanctification of the individual soul as such. Nor does the onus of liturgical action and prayer rest with the individual. It does not even rest with the collective groups, composed of numerous individuals, who periodically achieve a limited and intermittent unity in their capacity as the congregation of a church. The liturgical entity consists rather of the united body of the faithful as such— the Church—a body which infinitely outnumbers the mere congregation. The liturgy is the Church’s public and lawful act of worship, and it is performed and conducted by the officials whom the Church herself has designated for the post—her priests.

Cardinal Joseph Ratzinger’s work of the same name (inspired by its predecessor) deems the question of what worship is in history as essential to his investigation. We seem to have forgotten that worship, including the primordial urge to offer sacrifice, is written into our anthropology – it is everywhere and at all times present in human life. But the only way we can have forgotten such an elemental fact is if we have been trained out of it by those entrusted to the task.

Bishop Schneider offers, in this book, a fitting sequel to those two previous works and a ready antidote to what he calls the “profoundly wrong” attitude towards the Mass found among those clerics who “think they can manipulate it at will.”

Such an attitude is a reflection of modern times and of its deepest sickness, which is anthropocentrism, a spirit of autonomy, and a loss of a supernatural perspective. The idea that we are the ones who make the liturgy, and our failure to understand that Christ is always the main protagonist, derives from this illness. We are invited to participate in something that has been given to us by Christ and is an organic expression of the Church’s tradition. We are not the ones who animate the liturgy.

Bishop Schneider examines aspects of the Mass that most need review today. Of course, it’s not possible ever to express the totality of meaning of what the Mass is. But the reader will find here much food for thought. For pious reflection, to nourish the interior life, there are chapters about the Mass as perfect prayer, adoration, splendor, and so on – all the aspects that familiarity and present-day neglect tend to render obscure. For instruction on the larger question of ecclesiastical matters, the book offers a critique of the ways in which worship has degraded. At the same time, Bishop Schneider is careful to build his case on authorities both ancient and contemporary, referring often to documents of Vatican II and teachings of recent Popes.

The chapter called “The Mass is Sacred Service” can help the average layperson analyze recent changes by Pope Francis that ratify women as lectors and acolytes. Most Catholics have forgotten about subdeacons and porters, but Bishop Schneider’s excellent treatment of the question of minor orders can clarify what duties of the sanctuary are and are not. Stemming from canonical changes made by Paul VI and culminating with this latest move by Pope Francis, actions in the sanctuary are purported to relate to baptism and the priesthood of all believers. Bishop Schneider recovers the traditional view of these matters as stemming, rather, from the diaconate – that is, to ordination and a strictly male presence in the sanctuary. In this way, he reveals how a seemingly arcane issue relates Scripturally and historically to what has become a false paradigm of power and its distribution, instead of service.

“What is sacred must be expressed through signs, as human nature demands,” Bishop Schneider reminds us. Those signs are the details and beauty of worship, details that grew along with the Church as it spread throughout the world, until our time. The truly calamitous state of the faith today – for lay and clergy alike – demands that we take responsibility for them. The Catholic Mass is a valuable resource for that challenge. 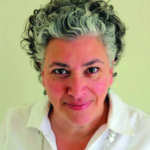 Leila Marie Lawler writes from Massachusetts. She is author of the three-volume work, The Summa Domestica: Order and Wonder in Family Life, newly published by Sophia Institute Press. She blogs at Like Mother, Like Daughter.