Demetrius and Nestor: October 26 and 27

Christian soldiers faced tough decisions in the Roman army. Mandatory worship of idols was only the beginning of their troubles; they also faced criticism from their co-religionists concerning their very profession! How, after all, does one square military duty with that pesky command, “Thou shalt not kill?” A number of soldiers gave up their lives on account of the former conundrum, notably the forty martyrs at Sebaste in 316 AD. Still, the resolution of the second point was very much under discussion for many years. 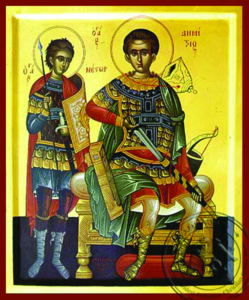 Enter Demetrius. In the army at Thessaloniki, Demetrius, of noble birth and admired for his virtue, had attained high rank despite his Christianity; for some time, Christians were actually tolerated in Thessaloniki and no one bothered to ask them to offer incense to the pagan gods. Demetrius made no secret of his religious belief and in fact, had persuaded a number of his men to join the Faith; many civilians too became his disciples! Christianity began to thrive in Thessaloniki, in large part due to the efforts of Demetrius.

But it so happened that Emperor Maximian stopped over in that city after successful campaigns in the Eastern Empire around 306 AD. He ordered gladiator games and entertainments to celebrate his success. A part of the festivities were to be public offerings to the gods; every soldier was ordered to take part. Of course, Demetrius refused and was interned in a malodorous latrine until he would renounce the Faith.

Among other entertaining spectacles, Maximian constructed a platform surrounded by upthrust spears. A large gentleman by the name of Lyaios, a favorite gladiator slave belonging to Maximian, would challenge all comers to a wrestling match. The loser would be thrown upon the lances to die a miserable death. If there were no challengers, Maximian would simply order a Christian arrested and pit him against the giant. Given his size and profession, no one was able to best Lyaios; many Christians met their deaths impaled upon the lances.

Enter Nestor, one of Demetrius’ most faithful soldier converts. Nestor was appalled at the behavior of Lyaios and the Emperor; he took it into his head to challenge the giant and thus protect the Christians of the city. Nestor visited Demetrius in his latrine and asked his advice. Demetrius, no doubt prompted by the Holy Spirit, approved the project and prophesied Nestor’s victory. Nestor indeed overcame Lyaios and ended his bloody career on the infamous spears. The enraged Maximian immediately ordered the execution of Nestor by beheading. Hearing that Demetrius had blessed Nestor’s feat, a squad of executioners were also dispatched to the latrine, there to end the glorious life of Demetrius. The Christians of Thessaloniki carefully preserved the relics of Demetrius; he became the special patron of that city. To this day, his bones exude a miraculous oil much prized for its healing properties.

Theologians studied these events carefully and began to formulate a Christian doctrine concerning military service. They took special note of Nestor’s motivation in challenging Lyaios; he was placing his life on the line to protect his fellow Christians. The death of the giant was merely an unfortunate necessity in that effort. Thus was born the tradition of military service as a form of laying down one’s life for one’s neighbor. One notable statistic deriving from this understanding: during World War II, the population of the United States was roughly 25% Catholic, yet fully 33% of the armed forces practiced the Faith! The tradition of the honorable Christian warrior was made possible by the valor of Demetrius and Nestor.