One of the most puzzling verses in Scripture is from St. Matthew’s Gospel: “…the kingdom of heaven suffers violence, and the violent take it by force.” (Matthew 11:12) There are a great many interpretations available to the curious Christian; disagreements even among the Fathers are distressingly easy to find!

First, clearly sheep, sheepfolds and shepherds play a large part in the imagery of the Bible, both Old Testament and New. Perhaps most tellingly, the continuity of the sheep-herding days of King David and the advent of the Good Shepherd hints that there is something rather special about our ovine friends. They appear in a number of parables, so it behooves us to examine a bit of natural history in their regard.

Sheep are notoriously stupid. They pay scant attention to their surroundings, making them easy prey for any half-way enterprising wolf. They panic easily, scattering to the four winds at the least provocation. They will blindly follow any of their fellows even into perilous situations. In short, they are in desperate need of a leader, a shepherd, for protection and the finding of good pasture. 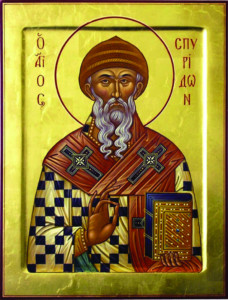 What is it that a good, attentive shepherd does? Among other things, each evening he will provide for his charges a safe enclosure. They will congregate in a sheepfold with an easily-guarded gate. The gate will be closed and the sheep will rest without fear of wolves. Our icon this month depicts precisely that: a shepherd who rose to the occasion and became also a bishop-shepherd to his flock in Cyprus. St. Spiridon was not known for his intellectual gifts, but he did indeed lay down his life in martyrdom for his charges, in imitation of his Master, the Good Shepherd.

An interesting bit of Scripture from the Old Testament is Micah 2:12-13. The verse speaks of sheep in trouble: they are in their fold, but a breach appears in the wall and the sheep rush out, breaking through the gate of their captivity, led by their king. The passage ends, “And the Lord shall lead them.”

In commentaries the word most often used for those breaking out is not “violent,” but rather, “forceful,” a rather more irenic term. The interesting point is that the sheep are in trouble in the sheepfold; the danger lies within, not with wandering wolves in the outside world!

With the benefit of New Testament scholarship, it is rather easy to see where theology will take the attentive reader. Israel was in trouble more often than not. The prophets warned them time and again that horrible things would happen unless they gave up their idolatry, their greed, their mistreatment of neighbors. They never listened, and of course disaster was always the result. Clearly Israel was a sheepfold in deep trouble, but with the advent of Christ, they finally had a chance to break out of their miserable self-destructive habits and find a new and healthier mode of being. Unfortunately, far too many refused to follow the lead of those bold, forceful and insightful fellow sheep, the Apostles. Led by the greatest Shepherd in history, they did break down the barriers, they pioneered a path to new and distinctly greener pastures. They boldly carried the Gospel from its Israelite cradle to the entire world. Their severely circumscribed world gave way to a vast panorama of theological discovery and a new appreciation of creation itself.

Alas, the world’s sheep largely yet cower in any number of unhealthy sheepfolds, bound by laws promulgated by the wolf of wolves, the Prince of this World, Satan himself! The “forceful” unfortunately seem in short supply.