The Pope Apologizes for Slapping an Annoying Woman’s Hand Away…

The Pope Apologizes for Slapping an Annoying Woman’s Hand Away…

…but who was really to blame?

An overeager woman in a New Year’s Eve crowd in St. Peter’s Square grabbed Pope Francis’right hand and pulled him toward her — and wouldn’t let go — provoking the Pope to slap her hand away in order to break free and move along the line of well-wishers.

The Pope’s reaction quickly became a sensation in the media. Video footage, replayed for days, showed Francis with a scowl on his face as he turned away from the woman.

Afterwards, the Pope apologized for his “loss of patience.” In an address to pilgrims to St. Peter’s the next day, he remarked, “So many times we lose our patience; me too, and I apologize for yesterday’s bad example.”

It was not the first time that the Pope had been accosted by someone in the crowd: During a trip to Mexico in 2016, somebody pulled on the pontiff’s arms, causing him to keel over atop a person in a wheelchair. Francis gestured angrily afterward, saying, “What is the matter? Don’t be selfish!”

In 2009, a woman jumped a barrier and lunged at Pope Francis’ predecessor, Benedict XVI, knocking him to the ground. The woman was later identified as a Swiss-Italian with a history of mental problems who had tried a similar attack a year earlier, only to be stopped by security guards.

The Vatican said it would review security procedures after that. In the following interview, an unnamed security specialist talks about the role of the Vatican security detail and, perhaps, their mistake. 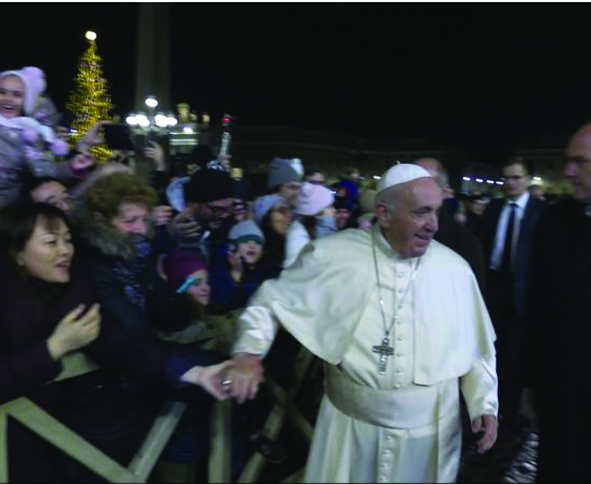 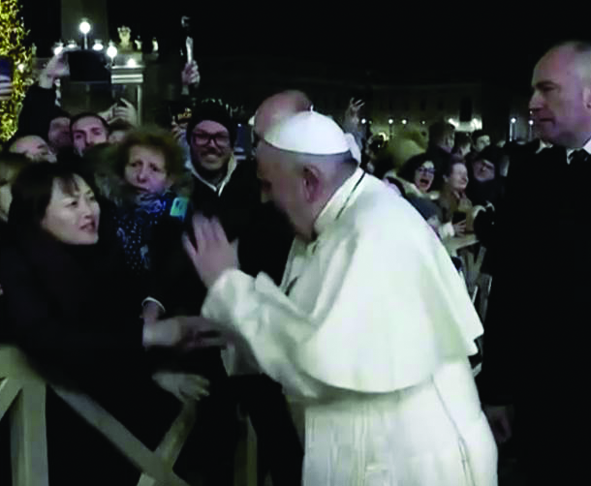 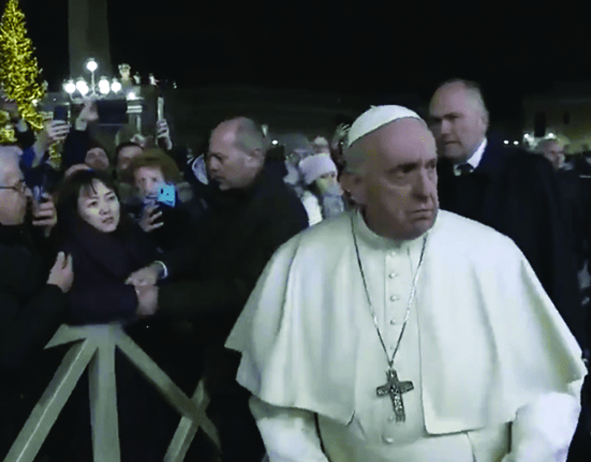 “It is security that should  apologize, not Pope Francis”

The “faceless carabiniere” has trained the Italian special forces for several decades, the escort personnel in the country, so much so as to be called upon to teach security techniques to police around the world. The day after it occurred, he explained the incident involving Pope Francis.

“The security of the Pope must apologize, not the Holy Father. The security of Pope Francis last night did everything wrong, perhaps because of relaxation, perhaps out of routine, but they made a complete mistake.”

The “Alpha Commander,” founder of one of Italy’s three police tactical units, the GIS, a special intervention group “available to the community 24 hours a day” that acts in the most dramatic and complex moments, explains this to AGI. Mafia arrests, complex operations, raids: the Alpha Commander has worn its insignia for almost 50 years, and has become the “faceless carabiniere (officer).”

“Guardianship is a serious matter. It is the second time that has happened in the Vatican,” the Alpha Commander recounts, “the first time being a few years ago when a lady climbed over the barriers and dropped Pope Benedict during Christmas Mass. Security must stay in line, both vertically and horizontally, so as to prevent such a thing. Last night the Pope was forced to give a little slap on the lady’s hand to free himself, but it really shouldn’t have gotten to that point.“

Alpha Commander also trained Vatican security. “Guaranteeing security for Pope Francis is very difficult because he himself does not want the men around… But on an evening like yesterday’s, security must be security and there are no mitigating factors, beyond the will of the Pope. You have to stay between the barriers and the Pope, creating a space; instead, the Holy Father was too close [to the people]. Regardless of what the protected says, even if it’s the Pope, you can’t leave him that way. “

Alpha Commander explains how complex their craft is. “This is a very difficult job, a preventive job, where the collaboration between the protected and security is fundamental, but routine is very dangerous; nothing ever seems to happen, but when you are not focused and something does happen, you will have a very slow reaction… Just remember when President Berlusconi was hit with a thrown statuette: security had felt relaxed and we all know what happened then… Unacceptable.”

According to the Alpha Commander, “In Italy, there is no culture of personal safety; then, when [something dangerous] happens, the response is too late. In other States, the protection service is considered a serious matter, respected also by the citizens. Here it’s not. We think what happened in the United States, with the assassination of President Kennedy, has been impossible since then. Even people in Italy must understand that life under escort is not a privilege, and they must respect both those who are protected and the people who protect them. “