“You Persecute Me…Enough of It Now! Enter Into the True Fold, God’s Kingdom on Earth.” 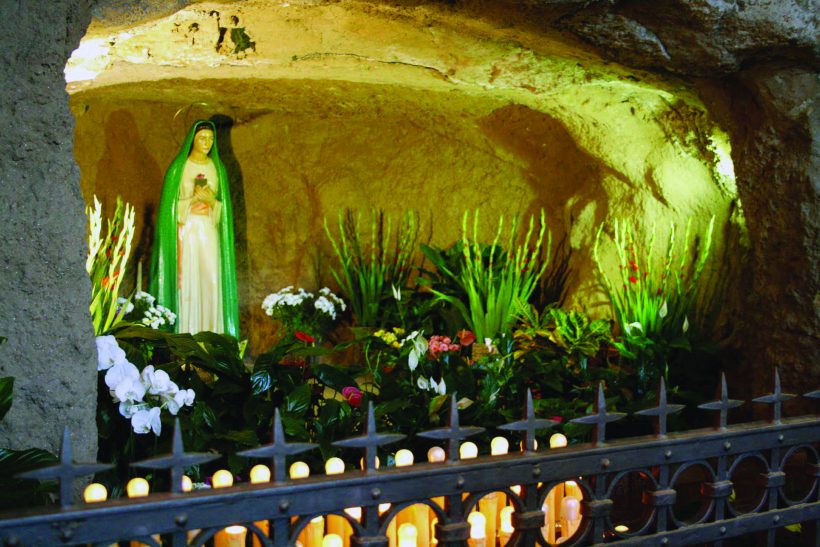 Grotto of the Three Fountains in Rome 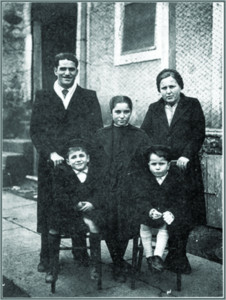 Bruno Cornacchiola and his family

Across the road from Rome’s San Paolo alle Tre Fontane (“St. Paul at the Three Fountains”) abbey and church, there is the Grotto of the Three Fountains in Rome, where St. Paul’s head was reputed to have bounced three times when he was beheaded.

It is now a shrine dedicated to the Virgin of Revelation, the site of an apparition which, though not formally approved by the Church, was acknowledged by Pope John Paul II in 1997, when he approved the renaming of the place as “Holy Mary of the Third Millennium at Three Fountains.”

It was a sunny Saturday after Easter in 1947. Bruno Cornacchiola, a railway worker, decided to take his three children— Isola, aged 10, Carlo, aged 7, and Gianfranco, aged 4—on a picnic. That afternoon he providentially missed a train going to Ostia and decided to go to the parkline Tre Fontane shrine area instead.

It was also, alas, notorious as a place of sin in which even the bodies of dead preborn babies were found. There, in the shade of the eucalyptus, while his children played, Bruno pored over his Bible. He was preparing a speech which he intended to deliver in a public square the following day, attacking the Church’s teaching on the Immaculate Conception.

Although Bruno had been baptized a Catholic and received his First Holy Communion, he did not practice his Faith. A few months after he was married, he deserted his wife and volunteered to fight in the Spanish Civil War. It was there that he embraced Protestantism, eventually becoming a militant Seventh Day Adventist. In 1939 he returned to Rome and to his wife, who remained a practicing Catholic. Prone to uncontrollable rages, he often beat her up. He forbade church attendance for the children and refused to have the youngest son baptized.

Besides being a wife-beater, Bruno Cornacchiola’s language was punctuated frequently with obscenities and blasphemy, and he had affairs with other women. The very morning of the picnic he passed a statue of Our Lady which read on its base, “Virgin Mother.” Bruno wrote in pencil, “You are neither virgin nor mother.”

In his great hatred of the Church, he was even devising a plot to assassinate Pope Pius XII on September 8, the feast of the birthday of the Blessed Virgin Mary. But on the afternoon of April 12, in the middle of his preparation for his verbal attack on Mary’s great prerogative, one of his children interrupted him. Would he help them find their ball?

Bruno put aside his notes and joined in the search, only to find his youngest son, Gianfranco, kneeling at the entrance to a dark cave.The boy’s hands were folded in the attitude of prayer, as though in ecstasy, and he repeated, “Beautiful lady! Beautiful lady!” as though he were addressing a living person.

Bruno was surprised, then uneasy, and finally seized by terror. He could see nothing in the cave; what was he to make of his son’s strange behavior?

Excitedly he turned to Isola and Carlo for an explanation. Initially curious and fearful, within seconds they also—first Isola and thenCarlo—fell to their knees and joined their hands in prayer, enraptured with the same vision. Bruno was dumbfounded. Then he heard all three of his children cry out together: “Beautiful lady!” He tried to move each child, but they were as if glued to the ground. He was terrified.

Suddenly, Bruno was also overcome by the strange mystical experience. His eyes were filled with intense light for a moment, then everything disappeared: his children and the cave. He felt himself becoming weightless, ethereal, as if his spirit had been freed of his body. When he regained his sight, Bruno saw in the cave a woman of indescribable beauty, and clothed in radiant white. Her black hair was surrounded by a halo of brilliant golden light. Her dress was gathered by a rose-colored sash, and over her shoulders she wore a striking green mantle.

The three colors of the dress (white), sash (rose-colored) and mantel (green), Bruno explained in later years, signify Mary’s relationship to the Three Divine Persons and the three apparitions of Lourdes, Fatima and Rome. At her bare feet lay a black cloth which had a smashed crucifix on it.

Her expression was one of motherly kindness, although clouded by sadness at times. In her right hand she held, resting on her breast, a small gray book. Her hands were crossed at her breast, but she unfolded them once to point to the broken pieces of the crucifix.

What message did Mary have for the wayward Bruno Cornacchiola—and our times? We know only part of it; the remainder was to be delivered to Pope Pius XII, who later was to bless the statue of theVirgin that stands in the grotto where she appeared. When the Blessed Virgin identified herself to Bruno Cornacchiola, she did so with two profound truths. The first was of a general nature: “I am the one that is of the Divine Trinity.” Because of her relationship to each person in the Blessed Trinity—daughter of the Eternal Father, spouse of the Holy Spirit and mother of the Divine Son—she is altogether unique among all of God’s creation. In the second identification she chose to reveal herself in relation to Bruno’s activity of Bible reading: “I am the Virgin of the Revelation.”

By this second title she corrects the error of those who would deny her privileges as unfounded, unnecessary inventions of the Catholic Church, not found in Divine Revelation in the Bible.

Then the Virgin of the Revelation addressed herself directly to Bruno, “You persecute me—enough of it now! Enter into the true fold, God’s Kingdom on earth. The Nine First Fridays of the Sacred Heart have saved you. You must be like the flowers which Isola picked; they make no protest, they are silent and do not rebel. . . With this dirt of sin, I shall perform powerful miracles for the conversion of unbelievers.”

She revealed to Bruno the sad condition of his soul. At once all his pat arguments and prejudices against the Church fell apart and he saw before him the way to salvation—the Roman Catholic Church.

At that point, the Virgin of the Revelation taught him the sure means of salvation, for him and for all mankind, which is prayer, and in particular the daily recitation of the Holy Rosary. “Pray much and recite the Rosary for the conversion of sinners, of unbelievers and of all Christians.”

To those souls who would heed her message, the Virgin promised great favors from Heaven. “In this place of sin Ishall perform wonderful miracles for the conversion of unbelievers.”

True to Mary’s promise, the dirt from the Grotto of Tre Fontane, which formerly had seen great immorality, has proven to be miraculous. Like the waters at Lourdes, it continues to work wonders for the welfare of both bodies and souls—so many that no one disputes that these graces have been received through the intercession of the Virgin of Revelation.

(From Marian Shrines of Italy, by the Franciscan Friars of the Immaculate)

“Miracles of Mercy” Vatican Pilgrimages in 2021

Join Inside the Vatican Pilgrimages in 2021 for our unique and faith-filled “Miracles of Mercy” pilgrimage to Rome, Assisi and other destinations in Italy where miracles like the apparition of the Virgin of Revelation took place.

You’ll see the astounding Eucharistic Miracle of Lanciano — a consecrated Host that turned into human flesh and has remained so for centuries — and visit the church where Our Lady of the Miraculous Medal appeared to another man who disdained the Catholic faith, a vision which transformed his life and spread devotion to her throughout an entire country. And all of this surrounding the feast of Divine Mercy, the feast of God’s mercy toward sinners, given in modern times as a sign of hope to this fallen world.