As the Holy See awaits the results of a scheduled financial inspection, Pope Francis spoke about ongoing financial reform and investigations at the opening of the judicial year of the Vatican City State’s court, which he attended for the first time.

He said February 15 the Holy See is trying to conform to international law and has put in place processes to combat “illegality in the international finance sector.” To do this, the Vatican has put in place internal surveillance and intervention systems, which “have recently brought to light suspicious financial situations,” he stated.

Pope Francis called for an educational revolution telling the Congregation for Catholic Education that more effort needs to be made to accelerate the inclusiveness of education.

Ecology and fraternity are an integral part of education, Pope Francis told the Catholic education leaders ahead of the Pope’s Global Compact on Education scheduled to take place May 14.

“The educational pact must not be a simple order, it must not be a rehash of the positivisms we have received from an Enlightenment education. It must be revolutionary,” Pope Francis said February 20. The Pope said that the purpose of an “education that focuses on the person in his integral reality” is “above all” oriented “to the discovery of fraternity that produces the multicultural composition of humanity.” 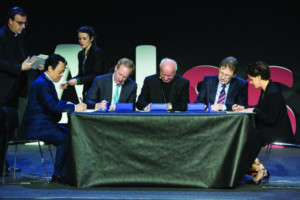 The Rome Call for AI Ethics was signed in Rome during the 2020 assembly of the Pontifical Academy for Life.

Pontifical Academy for Life, Tech Companies, Call for Ethical Use of AI Technology

The Pontifical Academy for Life signed, alongside presidents of IBM and Microsoft, a call for ethical and responsible use of artificial intelligence technologies.

According to the document, “the sponsors of the call express their desire to work together, in this context and at a national and international level, to promote ‘algor-ethics.’”

“Algor-ethics,” according to the text, is the ethical use of artificial intelligence according to the principles of “transparency, inclusion, responsibility, impartiality, reliability, security, and privacy.”

The signing of the Rome Call for AI Ethics took place as part of the 2020 assembly of the Pontifical Academy for Life, which was held February 26-28 on the theme of artificial intelligence.

Pope Francis’ “Economy of Francesco” in Assisi is Postponed

Pope Francis’ “Economy of Francesco” conference in Assisi is postponed until November 21 due to concerns about the coronavirus in Europe and worldwide.

This was announced by organizers on March 1, 2020, in a statement, which follows press conferences that were scheduled but postponed regarding the event at the headquarters of Rome’s Stampa Estera.

“The organizing committee of the ‘Economy of Francesco,’ the statement began, “informs that detailed information will be given shortly regarding the preparation of the event.”

They clarified that its planning continues “with great commitment and enthusiasm” and “has aroused much interest worldwide, expecting the participation of about 2,000 young people from 115 countries. In order to encourage the best progress of the initiative, given the objective difficulty that so many young people are currently having when traveling internationally and nationally,” the statement said, “the Holy Father, in agreement with the committee, has set November 21, 2020 for the new date of his meeting with young people in Assisi, preceded by the already planned days of study.” (Zenit)

Pope Francis is calling on Catholics to participate in “Laudato si’ Week” in May to encourage care for our common home.

“I renew my urgent call to respond to the ecological crisis. The cry of the earth and the cry of the poor cannot wait anywhere,” Pope Francis said in a video message published March 3.

The video shows young protesters yelling, “Climate justice, now” juxtaposed with images of wildlife in Africa and a beached whale.

Laudato si’ Week, sponsored by the Dicastery for Integral Human Development, will take place May 16-24. The date marks the fifth anniversary of the publication of Pope Francis’ encyclical on integral human ecology.

The Global Catholic Climate Movement and Renova + are facilitating the campaign. The Laudato si’ Week website recommends Catholics participate by engaging elected representatives, conducting an energy audit, or divesting in fossil fuels. It also recommends the option to “represent your commitment with a symbolic gesture,” such as planting a tree or attending a climate strike.

Pope’s Message to Youth: Don’t Let Your Cell Phone Distract You From Reality 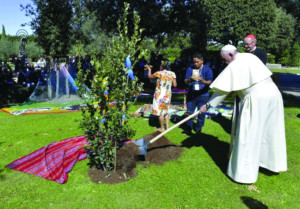 the Pope plants a tree at the Vatican during the Amazon Synod, which was dedicated to St. Francis

Pope Francis is asking youth to wake up from the deadening static of staring at a cell phone to encounter Christ in their neighbor.

“Today, we are often ‘connected’ but not communicating. The indiscriminate use of electronic devices can keep us constantly glued to the screen,” Pope Francis said in his message to young people published March 5.

“When I look at things, do I look carefully, or is it more like when I quickly scroll through the thousands of photos or social profiles on my cell phone?” Francis asked. The Pope warned that he sees a “growing digital narcissism” among young people and adults alike.

“How often do we end up being eyewitnesses of events without ever experiencing them in real time! Sometimes our first reaction is to take a picture with our cell phone, without even bothering to look into the eyes of the persons involved,” Francis said.

The Pontifical University Santa Croce issued a statement Tuesday, telling students that “following the announcement of the Italian government,” the university will suspend classes until March 15.

The Pontifical University of St. Thomas, the Angelicum, posted on its website March 4 that it will suspend its classes until March 15. The university also cancelled March 9 events which had been scheduled to celebrate the Feast of St. Thomas Aquinas.

The next ordinary Synod of Bishops will be a synod on synodality, the Vatican announced March 7.

In October 2022, bishops from around the world will meet in Rome to discuss the theme: “For a synodal Church: communion, participation and mission.”

The concept of “synodality” has been a topic of frequent discussion by Pope Francis, particularly during the previous ordinary Synod of Bishops on young people, the faith, and vocational discernment in October 2018.

Diocese of Rome Cancels All Public Masses, Announces Day of Fasting and Prayer

The Diocese of Rome canceled all public Masses until April 3 in response to the coronavirus outbreak. The announcement by the vicar general of the diocese follows a decree by the Italian government suspending all public religious ceremonies.

“The Church of Rome … assumes an attitude of full responsibility towards the community in the awareness that protection from contagion requires even drastic measures, especially in interpersonal contact. Therefore, until the same date of April 3, the communal liturgical celebrations are suspended,” Cardinal Angelo De Donatis, vicar general of Rome, said March 8.

“The season of Lent helps us to live this great trial evangelically. I bless you by entrusting you all to Our Lady of Divine Love,” the vicar general said.

Priests living in Rome and Vatican City can continue to celebrate Mass in private. Parishes in Rome will remain open for personal prayer before the tabernacle, the diocese said.