The Holy See announced a new law governing the judicial system of Vatican City State March 16. The motu proprio provides enhanced safeguards for the independence of judges and prosecutors in Vatican City to better address economic, financial and criminal cases in the sovereign territory.

Law CCCLI was signed by Pope Francis on Friday, March 13.

“Administering justice,” the Pope said in the preamble of the new law, “is not just a necessity of a temporal order.”

In the legal text, the Pope explained that the law is part of an ongoing process of legal renewal to replace the original 1929 laws of Vatican City, which began with the adoption of a new fundamental law for the city state in 2000.

On March 13, the seventh anniversary of the beginning of Pope Francis’ pontificate, the president of the Italian Republic, Sergio Mattarella, expressed best wishes to the Pontiff on behalf of the nation.

In this “moment of trial,” when the country is confined because of the COVID-19 pandemic, Italians know that they can “always turn with confidence and gratitude” to the Pope’s “particular solicitude,” he stressed in his message reported by “Vatican News.”

In his greeting, President Mattarella also referred to the “demanding” message that Pope Francis proposed with “indefatigable determination” for “attention to the most vulnerable.” (Zenit) 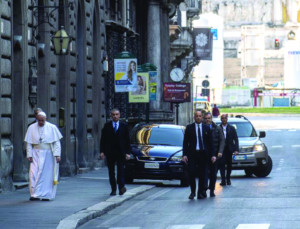 Pope Francis walked on foot to the Church of San Marcello al Corso in the center of Rome on March 15 to pray before a miraculous crucifix.

Pope Francis on March 15 took a brief walking pilgrimage in the city of Rome, and prayed for an end to the coronavirus pandemic during a surprise visit to both the Basilica of St. Mary Major and a cross that traversed Rome during a 16th century plague.

According to the Vatican, the Pope went to the basilica to visit the icon of Salus Populi Romani (Mary, Protection of the Roman People), to invoke her prayers against the coronavirus pandemic affecting Italy and the world.

A priest of the vicariate of Rome, Fr. Elio Lops, told CNA Pope Francis was accompanied during his visit by the archpriest of the basilica, Cardinal Stanislaw Rylko.

From the papal basilica, the Pope walked about half a mile on foot to the Church of San Marcello al Corso to pray before a miraculous crucifix, which was once carried in procession through the streets of Rome during the plague of 1522.

Announced March 20, a plenary indulgence is granted to Catholics who, infected with the coronavirus and quarantined at home or the hospital by order of health officials, participate spiritually in a devotion such as the rosary or the Way of the Cross.

Catholics around the world who pray for an end to the pandemic, healing for the sick, and the eternal repose of the dead are also granted the indulgence, according to the decree.

Pope Francis: the Church’s Pro-life Message is More Relevant Than Ever

“The attacks on the dignity and life of people unfortunately continue even in our era… We are faced with new threats and new slavery, and legislation is not always to protect the weakest and most vulnerable human life,” Pope Francis said March 25.

“The message of the encyclical Evangelium Vitae is therefore more relevant than ever,” the Pope said in his live-streamed Wednesday audience.

This year’s Solemnity of the Annunciation marks the 25th anniversary of the encyclical Evangelium Vitae, promulgated by St. John Paul II, on the value and inviolability of human life.

“Today, we find ourselves relaunching this teaching in the context of a pandemic that threatens human life and the world economy. A situation that makes the words with which the encyclical begins even more demanding,” the Pope said.

Vatican Approves Special “Mass in the Time Of Pandemic”

The Congregation for Divine Worship and the Sacraments has approved a special “Mass in the Time of Pandemic” to plead for God’s mercy and gift of strength in the midst of the coronavirus pandemic.

The Mass opens with a prayer that God would “look with compassion on the afflicted, grant eternal rest to the dead, comfort to mourners, healing to the sick, peace to the dying, strength to health care workers, wisdom to our leaders and the courage to reach out to all in love.”

In a letter dated March 30, Cardinal Robert Sarah, prefect of the congregation, and Archbishop Arthur Roche, congregation secretary, said, “In these days, during which the whole world has been gravely stricken by the COVID-19 virus,” many bishops and priests have asked “to be able to celebrate a specific Mass to implore God to bring an end to this pandemic.” 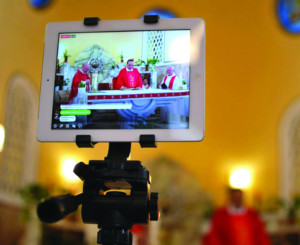 streaming a Mass in Rome

Access to clean water is an essential human right that must be defended and protected, the Vatican Dicastery for Promoting Integral Human Development said in a new document.

Defending the right to clean water is part of the Catholic Church’s promotion of the common good, “not some particular national agenda,” the dicastery said, calling for “a management of water so as to ensure universal and sustainable access to it for the future of life, the planet and the human community.”

The 46-page document, titled “Aqua Fons Vitae: Orientations on Water, Symbol of the Cry of the Poor and the Cry of the Earth,” was released by the Vatican March 30.

The preface, signed by Cardinal Peter Turkson, dicastery prefect, and Msgr. Bruno Marie Duffe, secretary of the dicastery, stated that the current coronavirus pandemic has shed light on “the interconnectedness of everything, be it ecological, economic, political or social.”

With Holy Week celebrations closed to the public due to the coronavirus pandemic, Pope Francis postponed the traditional Good Friday collection for the Holy Land to September.

The Vatican announced April 2 that the Pope approved a proposal to hold the collection in churches worldwide September 13. “The Christian communities in the Holy Land, while exposed to the risk of contagion and often living in very trying circumstances, benefit every year from the generous solidarity of the faithful throughout the world, to be able to continue their evangelical presence, as well as to maintain schools and welfare structures open to all citizens for education, peaceful coexistence and care, especially for the smallest and poorest ones,” the Vatican said.

Prisons’ Passion: Via Crucis Meditations Reflect on Aftermath of Crime

While Pope Francis’ Way of the Cross service on Good Friday had been transferred to the Vatican because of the coronavirus pandemic, the meditations focus, as always, on those who share the pain, suffering and heartbreak that characterized Christ’s passion and death.

In a letter published in an Italian newspaper in early March, Pope Francis said he chose the Catholic community of the Due Palazzi prison in Padua so that the meditations would reflect on the lives of those involved in the prison system to illustrate how “the resurrection of a person is never the work of an individual, but of a community walking together.” The result is a set of meditations on the traditional 14 stations written not only by prisoners, but also by people directly affected by crime, including prisoners’ families, victims and even a priest falsely accused of a crime.

Before we commit a sin, there were usually small temptations which we let grow in our soul, eventually making excuses for ourselves and our fall, Pope Francis said during Mass at his residence.

“That process which makes us change our hearts from good to bad, which takes us downhill,” he said April 4, is “something which grows, slowly grows, then infects others and ultimately excuses itself.”

“When we find ourselves in a sin, in a fall, yes, we must go to ask the Lord for forgiveness, it is the first [step] that we must take,” he urged. But then ask yourselves, he said: “How did I come to fall there? How did this process start in my soul? How did it grow? Whom have I infected? And how in the end did I justify myself for falling?”