A Maltese court has authorized the seizure of assets belonging to the Institute for Works of Religion (IOR), commonly called “the Vatican Bank.” The garnishment order was issued last month, allowing three companies involved in a lawsuit against the bank to seize €29.5 million in assets.

Two Malta-based investment companies, Futura Funds Sicav and Futura Investment Management, along with Luxembourg-based Courgar Real Estate, have been embroiled in a years-long court battle with the IOR over millions of euros which the Vatican bank agreed to invest with the firms, before withdrawing from the deal.

At issue is a 2013 investment plan involving the purchase of a property in Hungary — the Budapest Exchange Palace — for development and resale. According to Futura, the IOR originally said it would commit €47 million euros to the project but only delivered €14 million.

Futura argued in the lawsuit that, following a change of leadership at the IOR, the bank had reneged on the project and wanted to go back on its legal commitment to invest.

The judgement by the Maltese court was made March 13 and represents the balance of the investment owed by the IOR and “material damages suffered by Futura Fund and Futura IM” according to a statement from Futura released to the financial news website Expert Investor and reported April 6. 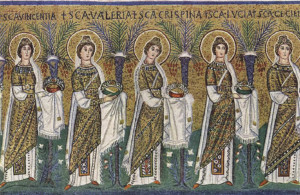 Pope Francis has established a new “Study Commission on the Female Diaconate” as a follow-up to a previous group that studied the history of women deacons in the New Testament and the early Christian communities.

Cardinal Giuseppe Petrocchi of Aquila will serve as president of the new commission and Father Denis Dupont-Fauville, an official of the Congregation for the Doctrine of the Faith, will serve as secretary, the Vatican said April 8. Pope Francis named 10 other members of the commission.

None of the 12 were part of the Commission Pope Francis established in 2016 to study the historical facts about the women referred to as deaconesses in the New Testament and about the role of women deacons in the early Church.

Pope Francis’ Easter Blessing: May Christ dispel the darkness of our suffering humanity.

In his Easter blessing, Pope Francis called on humanity to unite in solidarity and look to the risen Christ for hope amid the coronavirus pandemic.

“Today the Church’s proclamation echoes throughout the world: ‘Jesus Christ is risen!’ – ‘He is truly risen,’” Pope Francis said on April 12.

“The Risen Lord is also the Crucified One … In his glorious body he bears indelible wounds: wounds that have become windows of hope. Let us turn our gaze to him, that he may heal the wounds of an afflicted humanity,” the Pope said in a nearly empty St. Peter’s Basilica.

“Today my thoughts turn in the first place to the many who have been directly affected by the coronavirus: the sick, those who have died and family members who mourn the loss of their loved ones, to whom, in some cases, they were unable even to bid a final farewell. May the Lord of life welcome the departed into his kingdom and grant comfort and hope to those still suffering, especially the elderly and those who are alone,” he said.

The Vatican is creating a commission, at the request of Pope Francis, to provide local aid and tackle issues related to the fallout from the coronavirus pandemic, according to a statement released April 15.

The commission has been formed “to express the concern and love of the Church for the whole human family in the face of the COVID-19 pandemic, above all through the analysis and reflection on the socio-economic and cultural challenges of the future and the proposal of guidelines to face them,” according to the announcement.

Pope pens editorial on joy in the time of Coronavirus

Like the women at the tomb whose sorrow turned to joy after the Resurrection, Christians also are called to be joyful witnesses to Christ’s victory over death amid the coronavirus pandemic, Pope Francis said.

In an editorial published April 17 by the Spanish magazine, Vida Nueva, the Pope said that those who take part in “the Lord’s passion, the passion of our brothers and sisters, even living our own passion, our ears will hear the newness of the Resurrection: we are not alone, the Lord precedes us on our journey by removing the stones that paralyze us.”

“If there’s one thing we’ve been able to learn in all this time, it’s that no one is saved alone,” he wrote. “Borders are falling, walls are crumbling and all fundamentalist  discourses are dissolving before an almost imperceptible presence that shows the fragility of which we are made.” 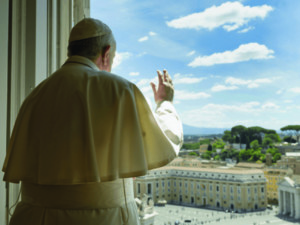 Pope Francis, in this period of pandemic, looks out from his window onto a completely empty St. Peter’s Square

Because of the coronavirus pandemic and its impact on the travel and assembly of large groups of faithful, the Pope, the papal committee, congress organizers, and the bishops of Hungary decided to hold the congress in Budapest in September 2021, instead of this year.

The announcement came a few days after the Vatican announced the next World Meeting of Families would be pushed back until June 2022 and the next international gathering for World Youth Day would be postponed to August 2023.

To mark his name day, the feast of St. George (“Jorge” means “George” in Spanish), Pope Francis gave the gift of medical supplies to several countries reeling from the coronavirus pandemic.

The Pope, who was born Jorge Mario Bergoglio, donated respirators, masks and protective eyewear on the April 23 feast of his namesake, St. George, Vatican News reported.

Five new respirators were to be delivered to a hospital in Suceava, Romania, the epicenter of the outbreak in the country. The Pope will also donate two respirators to a hospital in the southern Italian city of Lecce and three to hospitals in Madrid, the report said. The donation “is a beautiful sign that falls on this particular day in which the Holy Father doesn’t receive a gift but gives a gift to others,” said Cardinal Konrad Krajewski, the papal almoner. The medical equipment, he added, is “a hug from the Pope during a difficult situation for the whole world.”

The Holy See has announced that new “measures” have been taken against officials at the Vatican Secretariat of State as part of ongoing investigations into financial dealings at the curial department.

In a statement sent to journalists April 30, Holy See press officer Matteo Bruni said that in response to “some questions from journalists,” he could confirm “that individual measures had been arranged for some employees of the Holy See, at the expiry of those adopted at the beginning of the investigation of financial and real estate investments of the Secretariat of State.” The release confirms that a months-long Vatican investigation is ongoing, aiming to dig into complicated financial transactions and investments made by officials at the secretariat over a period of years.

In a statement marking the beginning of the Muslim holy month of Ramadan, the Vatican condemned an increasing spate of attacks on churches, synagogues, and mosques around the world.

Cardinal Miguel Ángel Ayuso Guizot, M.C.C.J., president of the Pontifical Council for Interreligious Dialogue in the Council’s “Message for the Month of Ramadan” on May 1 wrote that “recent attacks on churches, mosques and synagogues by wicked persons who seem to perceive the places of worship as a privileged target for their blind and senseless violence” are to be condemned.

He cited the 2019 joint statement of Pope Francis and the Grand Imam of Al-Azhar on human fraternity, which stated that such attacks are “a deviation from the teachings of religions as well as a clear violation of international law.”