Pope Francis celebrates a Filipino Christmas tradition at the Vatican

“In the Philippines, for centuries, there has been a novena in preparation for Christmas called Simbang Gabi, ‘Mass of the Night.’ During nine days the Filipino faithful gather at dawn in their parishes for a special Eucharistic celebration,” Pope Francis said December 15.

“Through this celebration we want to prepare ourselves for Christmas according to the spirit of the Word of God that we have listened to, remaining constant until the Lord’s definitive coming,” he said in his homily for the Mass in St. Peter’s Basilica.

Pope Francis invited Rome’s Filipino community to celebrate Gaudete Sunday Mass at the Vatican in honor of the first day of the traditional novena. It is the first time that a Pope has celebrated Simbang Gabi at the Vatican.

Pope Francis declared that the pontifical secret will no longer apply in cases of accusations and trials involving abuse of minors or vulnerable persons, and in cases of possession of child pornography by clerics.

With the instruction published December 17, “On the Confidentiality of Legal Proceedings,” Pope Francis intends “to cancel in these cases the subjection to what is called the ‘pontifical secret,’ bringing back instead the ‘level’ of confidentiality, dutifully required to protect the good reputation of the people involved,” according to Bishop Juan Ignacio Arrieta, secretary of the Pontifical Council for Legislative Texts.

The pontifical secret, also sometimes called papal secrecy, is a rule of confidentiality protecting sensitive information regarding the governance of the universal Church. It is similar to the “classified” or “confidential” status common in companies or civil governments.

In the new instruction, Pope Francis said the pontifical secret will also no longer bind those working in offices of the Roman Curia to confidentiality on other offenses if committed in conjunction with child abuse or child pornography. 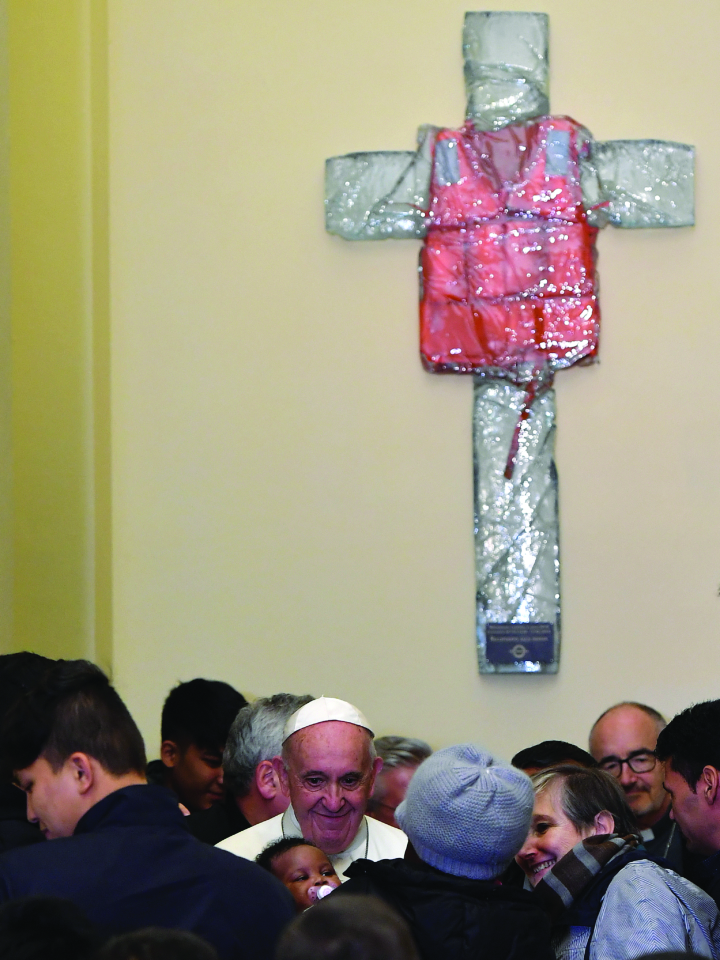 Pope Francis after the ceremony of installing of a cross in memory of migrants and refugees.

Pope Francis hung a cross encircled by a life jacket inside a Vatican building in memory of migrants and refugees who have lost their lives in the Mediterranean Sea in recent years.

He also welcomed, on December 19, a group of asylum seekers brought to Italy by the head of the papal charities office, Cardinal Konrad Krajewski.

The transparent cross was hung inside an entrance to the apostolic palace reached from the Belvedere Courtyard — where diplomats and heads of state arrive for audiences with the Pope.

“In the Christian tradition the cross is a symbol of suffering and sacrifice but also of redemption and salvation,” Francis said.

This cross, he continued, “presents itself as a challenge to look more carefully and to always seek the truth.”

Pope Francis made a surprise visit to a high school in Rome, where he spoke to about 800 students and answered questions about war, peace, and the coexistence of different cultures and religions.

The Pilo Albertelli State High School is close to the Basilica of St. Mary Major. The Pope arrived there by car on the morning December 20.

According to Matteo Bruni, Holy See press office director, students performed a song for Francis and the dean of the school gave an address.

Pope Francis rang the school bell and wished everyone a Merry Christmas. 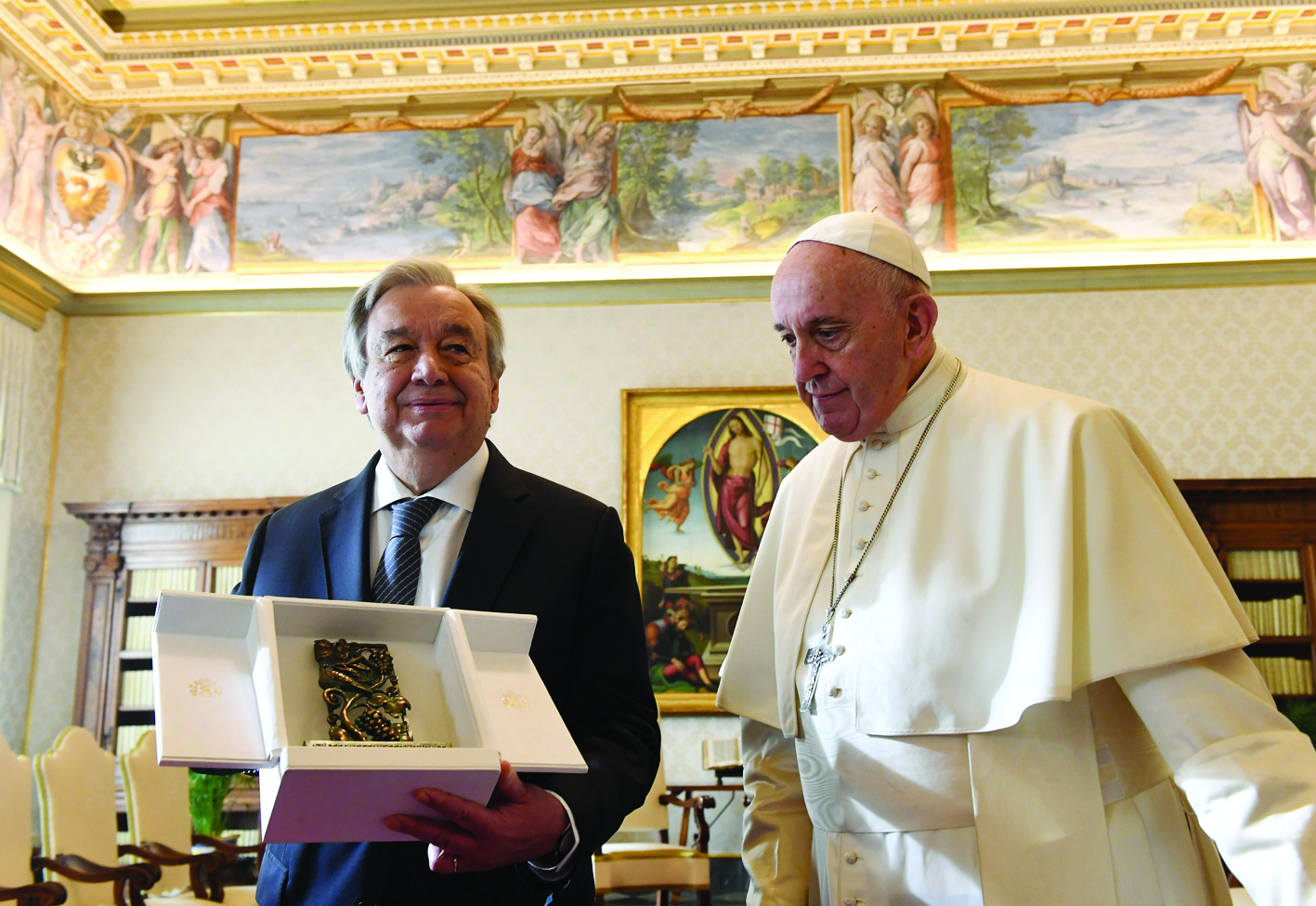 Pope Francis and the United Nations Secretary General António Guterres recorded a video message together at the Vatican in which the two leaders urge the importance of religious freedom, human dignity and environmental protection.

“We must not remain indifferent to human dignity trampled on and exploited, to attacks against human life, whether it is yet to be born or that of every person in need of care,” Pope Francis said in the video message recorded with the UN Secretary General at the Vatican Apostolic Palace December 20. “We cannot, we must not turn away when the believers of various faiths are persecuted in different parts of the world. The use of religion to incite hatred … cries out for God’s justice,” the Pope said. 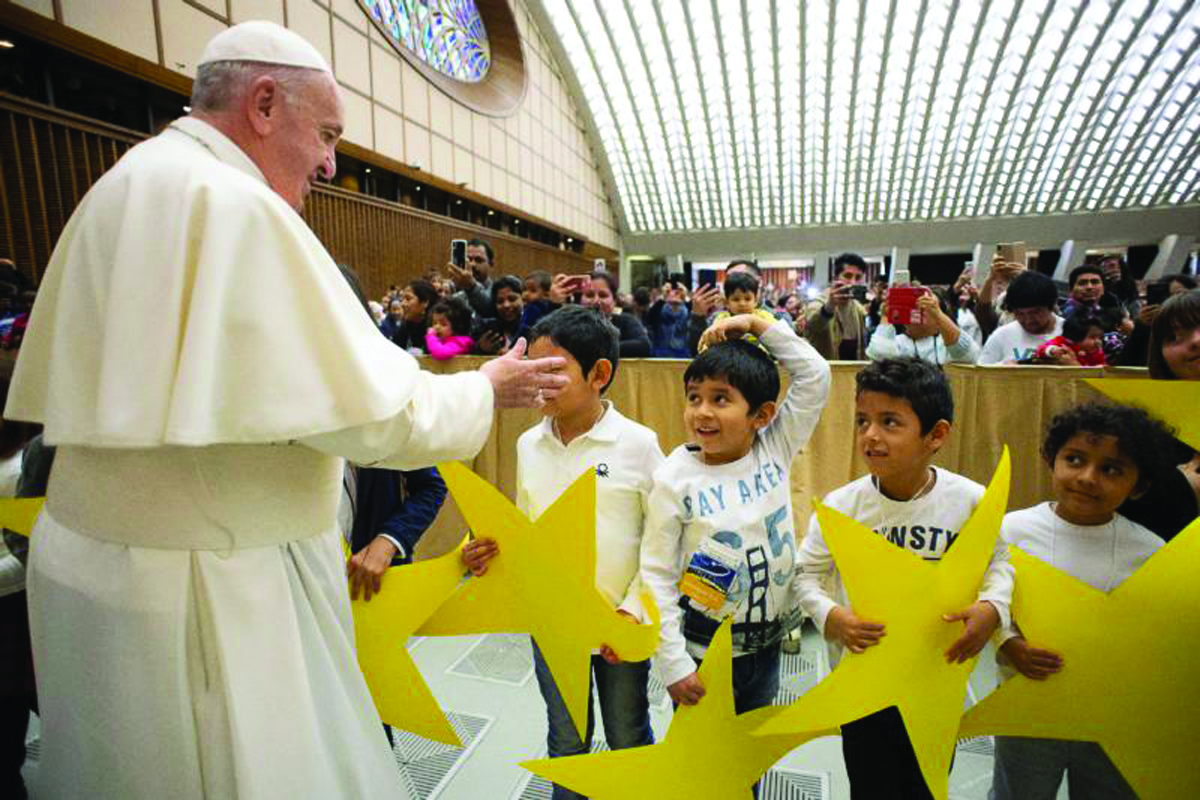 When a group of children sang a belated “Happy Birthday” to Pope Francis and gave him a big cake, he needed to think twice before not eating some of it before lunch.

“The cake looks good,” the Pope told children served by the St. Martha Pediatric Clinic at the Vatican. “Can we eat it? Yes? All of us? Or should we wait? Let’s wait, it’s more prudent.”

And, in fact, after their audience with the Pope December 22, the children’s celebration continued with lunch and gifts. And, presumably, a piece of cake.

Meanwhile, Pope Francis went to the Apostolic Palace to lead the recitation of the Angelus prayer with thousands of people gathered in St. Peter’s Square.

The Pope’s morning meeting with the children was billed as a pre-Christmas greeting, but the little ones also used it as an opportunity to mark the Pope’s 83rd birthday, which was December 17.

Later, before reciting the Angelus prayer, Pope Francis offered a short reflection on the day’s Gospel reading about how St. Joseph considered quietly calling off his marriage to Mary since she was already pregnant, but an angel appeared to him in a dream and told him not to be afraid.

“At this point,” the Pope said, “Joseph entrusts himself completely to God, obeys the word of the angel” and takes Mary as his wife.

Pope Francis concluded his address with a word to families. “Your families, who in these days of festivity are gathering: Those who live far from their parents and return home; brothers and sisters who try to get together. May holy Christmas be for all an occasion of fraternity, growth in faith and gestures of solidarity with those in need.”

On the feast of the Holy Family of Nazareth, Pope Francis encouraged families to get off their cell phones and talk to one another.

“In your family, do you know how to communicate with each other, or are you like those kids at the table — each one has their own cell phone, chatting?

“In that table there is a silence as if they were at Mass, but they don’t communicate with each other,” Pope Francis said in his Angelus address December 29.

“We need to retake communication within the family: parents, children, grandparents and siblings must communicate with each other,” the Pope said.

“This is your assignment for today for the feast of the Holy Family,” he said.

Pope Francis: “Honor the dignity of women” for a better world in 2020

In his homily for the Solemnity of the Blessed Virgin Mary, the Mother of God, Pope Francis said that women must be honored and respected — not exploited for profit and pornography — in 2020.

“How many times is the woman’s body sacrificed on the profane altars of advertising, profit, pornography, exploited as a surface to be used,” Pope Francis said in St. Peter’s Basilica January 1.

“If we want a better world, which is a house of peace and not a war zone, we have to care for the dignity of every woman,” the Pope said.

Pope Francis said that our level of humanity can be judged by how we treat a woman’s body, “the most noble flesh in the world” and “the culmination of creation.”

Pope Francis on January 2, 2020, released a video message to accompany his prayer intention for January: “Promotion of World Peace.”

In his prayer intention for the month of January, Pope Francis calls us to pray that Christians, followers of other religions, and all people of goodwill may promote together peace and justice in the world.

The Pope’s Worldwide Prayer Network of the Apostleship of Prayer developed “The Pope Video” initiative to assist in the worldwide dissemination of monthly intentions of the Holy Father in relation to the challenges facing humanity. (Zenit)

The Republic of South Sudan and the South Sudan Opposition Movements Alliance (SSOMA) have signed a peace declaration in Rome that will go into effect January 15.

“I think this process will help the country to change to bring peace for the people,” Paolo Impagliazzo, Secretary General of the Community of Sant’Egidio, told CNA January 13.

In peace talks in Rome facilitated by the Catholic community of Sant’Egidio, opposition groups and the South Sudanese government recommitted to cease hostilities, pursue political dialogue, and allow humanitarian aid for the people of South Sudan.

Signers of the “Rome Declaration on the Peace Process in South Sudan” notably included representatives of the opposition groups in SSOMA, who refused to sign an earlier peace agreement on September 12, 2018 in Khartoum, and the Sudan People’s Liberation Movement (SPLM) and National Democratic Movement (NDM) as witnesses.