The dignity and rights of trafficking victims require the international community to do more to prosecute and bring down traffickers, a representative of the Holy See said this week.

Fr. Joseph Grech of the Permanent Mission of the Holy See to the International Organizations in Vienna, addressed an international conference July 20-22 on the prosecution of traffickers.

These statistics “should make us indignant,” Grech said in one of four panel interventions.

“We must wonder if, as an international community, we have done everything possible to reduce the discrepancy between the high number of estimated victims and the low numbers of court proceedings and convictions,” he said.

The Vatican Dicastery for Laity, Family, and Life launched a new campaign urging young people to “send a hug” to elderly people isolated by the coronavirus pandemic.

In a press statement dated July 27, the dicastery said it was inspired to launch the campaign, called “The elderly are your grandparents,” by Pope Francis’ comments after Sunday’s Angelus.

“In memory of Saints Joachim and Anne, the grandparents of Jesus, I would like to invite young people to make a gesture of tenderness towards the elderly, especially the most lonely ones in homes and residences, those who have not seen their loved ones for many months,” Pope Francis said after the Angelus prayer July 26.

Pope Francis encouraged youngsters to use the “inventiveness of love” to “send a hug” to an elderly person in their community by making a phone or video call, sending a card, or visiting where safety measures permit it.

Pope Francis’ charitable project for Ukraine, started in 2016, has helped nearly 1 million people in the war-torn country, according to the auxiliary bishop of Leopoli.

Bishop Eduard Kava told Vatican News July 27 that in four years the project has used around 15 million euros ($17.5 million) to help an estimated 980,000 people, including the poor, the sick, the elderly, and families.

“The Pope for Ukraine” was started in June 2016, at Francis’ request, to help victims of conflict in the Eastern European country.

Kava said the project was now winding down, and the last program to finish would be the funding of medical equipment for a hospital under construction. 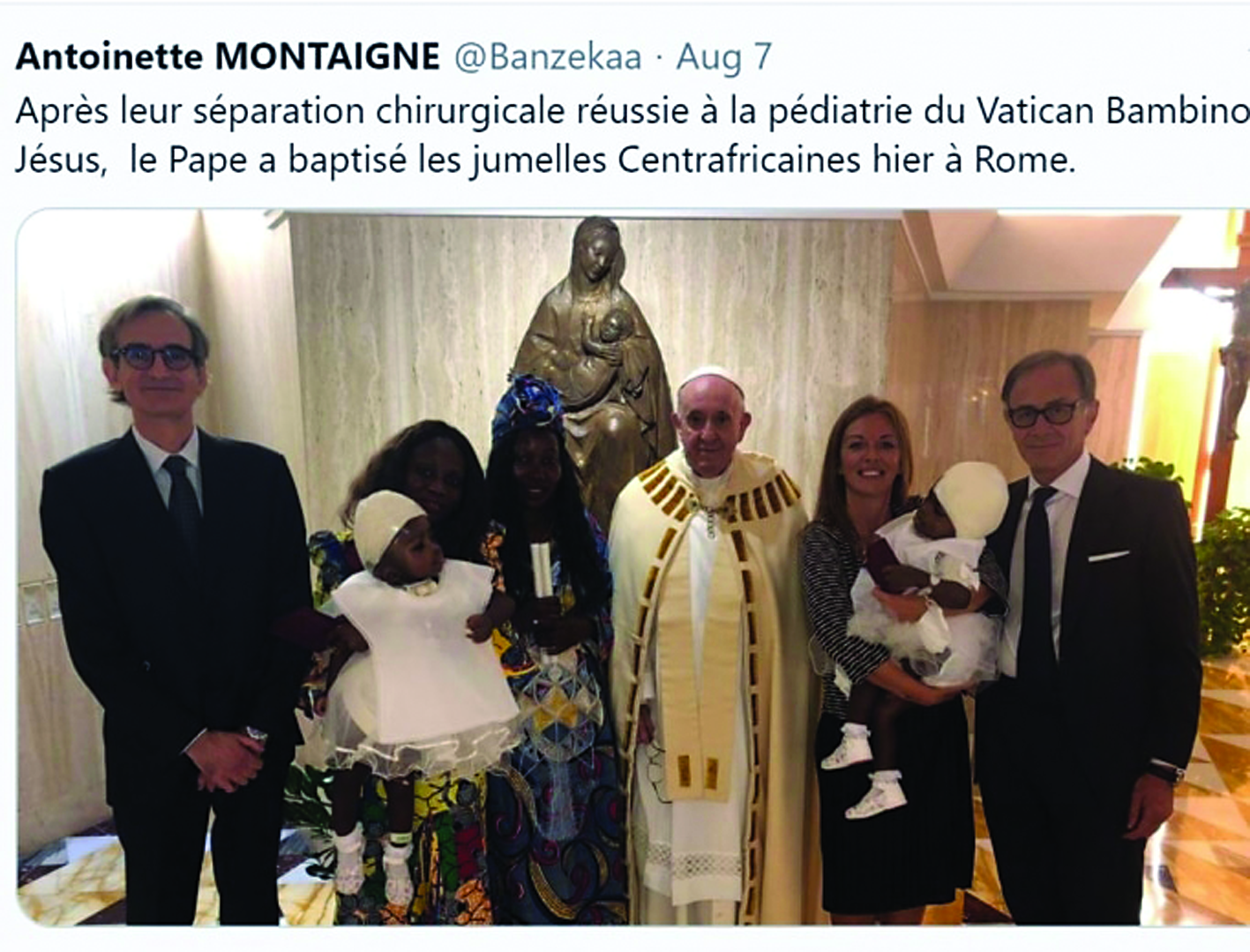 A photo on Twitter of Pope Francis with conjoined twins in their baptismal gowns on August 7, after an operation to separate them.

Pope Francis baptized twins who were born conjoined at the head and were separated at the Vatican’s pediatric hospital.

The twins’ mother had said at a press conference following the successful surgery at the Bambino Gesù Hospital on June 5 that she wanted the twins to be baptized by the Pope.

“If we had stayed in Africa I don’t know what fate they would have had. Now that they are separate and well, I would like them to be baptized by Pope Francis who has always taken care of the children of Bangui,” said the girls’ mother Ermine, who came with the twins from the Central African Republic for the surgery on July 7.

Antoinette Montaigne, a Central African politician, posted a photo on Twitter of Pope Francis with the twins in their baptismal gowns on August 7, writing that the Pope had baptized the separated twins the day prior.

On August 8, some 76 faith leaders from around the world issued a powerful statement calling for action to stop atrocities against the Uyghurs and other Muslims in China that they describe as “one of the most egregious human tragedies since the Holocaust.”

Myanmar’s Cardinal Charles Maung Bo, president of the Federation of Asian Bishops’ Conferences, and Indonesia’s Cardinal Ignatius Suharyo were among the senior figures calling for an investigation into grave human rights violations against the Uyghurs.

While the Uyghurs have faced repression for many years, a campaign of persecution has intensified in the past few years, with evidence to suggest that the Chinese Communist Party regime is aiming to eradicate the Uyghur cultural and religious identity.

At least a million — perhaps as many as three million — Uyghurs are incarcerated in prison camps, where they face systematic and severe torture, sexual violence and slave labor. Outside the camps, the Chinese regime has established an Orwellian surveillance state, with artificial intelligence, facial recognition technology, cameras on every block and Chinese agents living with Uyghur families to monitor them 24 hours a day. (Union of Catholic Asian News) 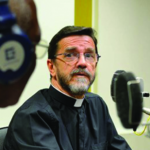 Pope Francis made an unexpected phone call August 19 to a bishop in northern Mozambique, where militants linked to the Islamic State have seized control of the port city of Mocimboa da Praia.

“Today … to my surprise and joy, I received a call from His Holiness Pope Francis who comforted me greatly. He said that he … is following events in our province with great concern and that he has been praying for us. He also said to me that if there was anything else that he could do, we should not hesitate to ask him,” Bishop Luiz Fernando Lisboa wrote on a diocesan webpage.

Pope Francis has praised a new initiative aimed at countering the abuse of Marian devotions by Mafia organizations, who use her figure to wield power and exert control.

“Freeing Mary from the Mafia and from criminal powers” is an ad hoc department of the Pontifical International Marian Academy (PAMI). The academy’s president, Fr. Stefano Cecchin, OFM, told CNA August 20 that the Blessed Virgin Mary does not teach submission to evil, but freedom from it.

Cecchin explained that Mary’s “submission” to the will of God had become distorted to imply not servanthood, but “slavery” characterized by “absolute obedience to superiors.”

Pope Francis released a message for the World Day of Prayer for the Care of Creation in which he called for repentance for humanity’s broken bonds with God’s creation and with others.

“Today we hear the voice of creation admonishing us to return to our rightful place in the natural created order — to remember that we are part of this interconnected web of life, not its masters.” Pope Francis wrote in the message  published September 1. “The disintegration of biodiversity, spiralling climate disasters, and unjust impact of the current pandemic on the poor and vulnerable: all these are a wake-up call in the face of our rampant greed and consumption.” 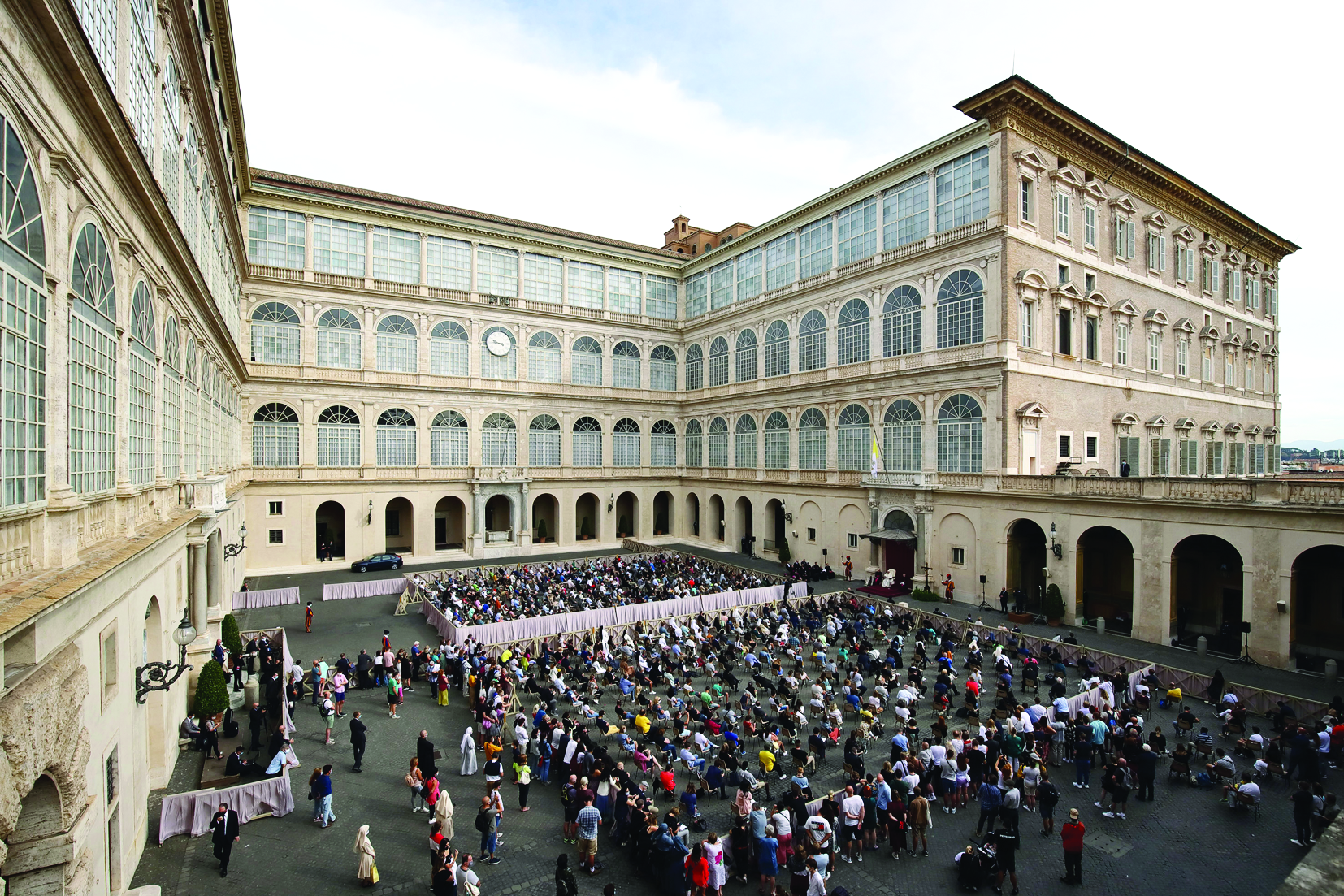 The first general audience of Pope Francis after the long break due to the coronavirus pandemic was held here September 2, in the presence of a small group of faithful in masks

In his first Wednesday audience with pilgrims since Italy’s lockdown, Pope Francis called for solidarity to reawaken unity and bring God’s love to a suffering world.

“In the midst of crises and storms, the Lord challenges us and invites us to reawaken and activate this solidarity capable of giving solidity, support and meaning to these hours in which everything seems to be wrecked,” Pope Francis said September 2 in the San Damaso Courtyard within the Vatican’s apostolic palace.

“A solidarity guided by faith enables us to translate the love of God in our globalized culture, not by building towers or walls — and how many walls are being built today — that divide and then crumble, but by interweaving communities and sustaining processes of growth that are truly human and solid,” the Pope told the pilgrims.

The Vatican expects to renew its interim deal with China on the appointment of bishops, due to expire in October, Secretary of State Cardinal Pietro Parolin said.

“With China, our current interest is to normalize the life of the Church as much as possible, to ensure that the Church can live a normal life, which for the Catholic Church is also to have relations with the Holy See and with the Pope,” Parolin said on September 14, according to Italian news agency AgenSIR.

Parolin noted that this goal should also take place “against a backdrop of peaceful coexistence, the search for peace and overcoming tensions.”

“Is there the same intention on their part too? I think and hope so,” he said, calling the results of the two-year provisional agreement “not particularly exciting.”