What is Rome’s Greatest Latin Inscription?

What is Rome’s Greatest Latin Inscription?

A metaphor that has become literal fact 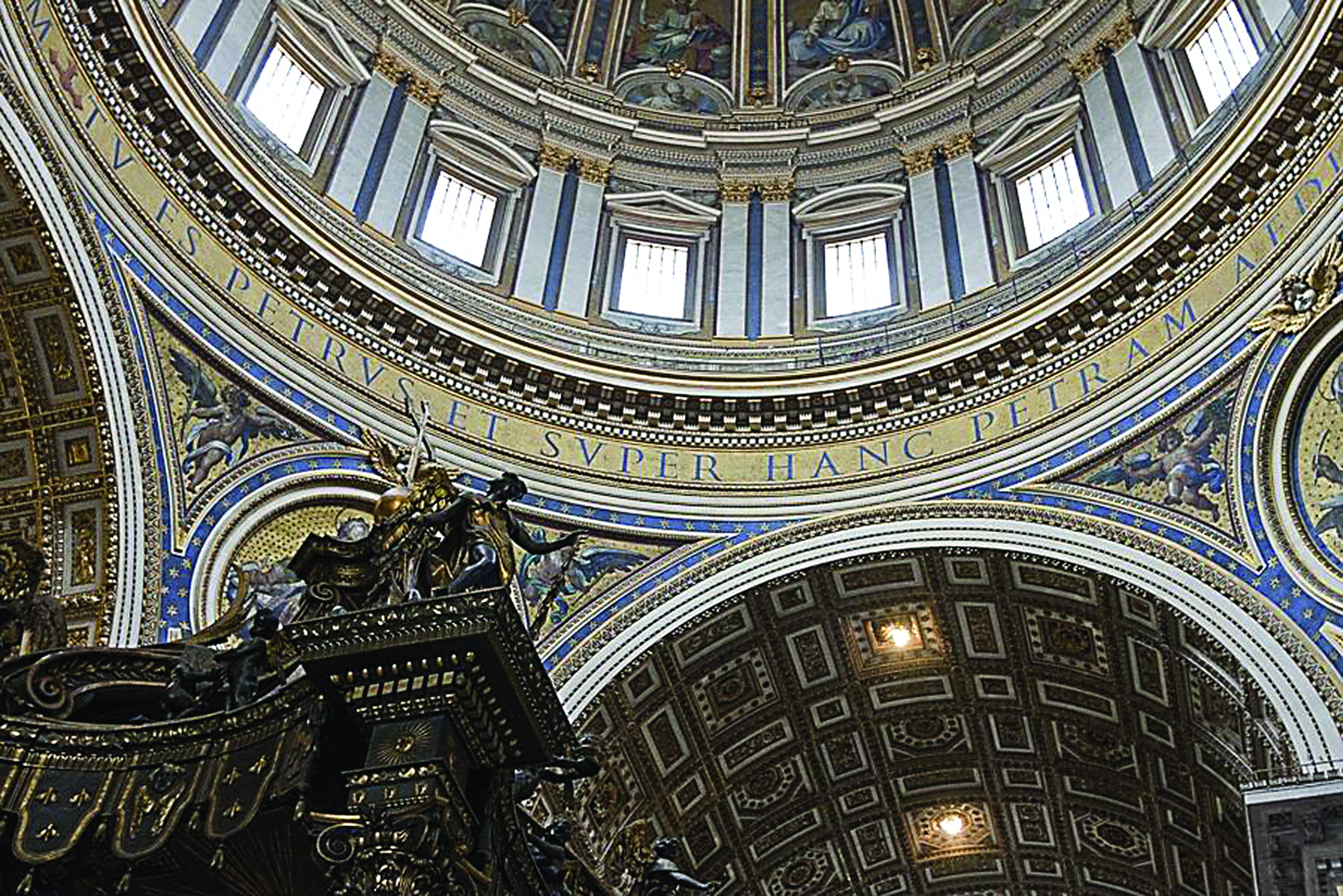 Inscription in St. Peter’s, adorning the inside of Michelangelo’s dome: “Tu es Petrus et super hanc petram aedificabo…” (“You are Peter, and upon this rock I will build…”)

Rome, as everyone knows, is replete with Latin inscriptions. They’re all over the churches, homes, fountains, obelisks, art, and museums. But what is the greatest of all Rome’s inscriptions? Which offers the most satisfaction intellectually and aesthetically?

For many, the answer is Marcus Agrippa’s inscription on the Pantheon: M AGRIPPA L F COS TERTIUM FECIT. Its great big black letters fill up the entire piazza and manage to be grand and overwhelming while also being austere and restrained. All it says is “Marcus Agrippa, son of Lucius (“Lucii filius”), consul for the third time, made this. ”But an entire world is called up by those few letters: that a man should elevate his own name, and his father’s; that political preferment — and especially to be chosen for Rome’s highest political office, the consulship — was the defining feature of excellence; and that creation — doing, making, facere in Latin— is the highest, greatest act of all, are all aspects of Roman culture on display in this short inscription. It’s probably the most complete evocation of Romanitas ever chiseled and was apparently even recognized as such in antiquity. The inscription has been preserved, though the building it graced has not: a century and a half after Agrippa, Hadrian completely rebuilt the structure. But he transferredAgrippa’sinscription, which could not be improved upon, to the new building. 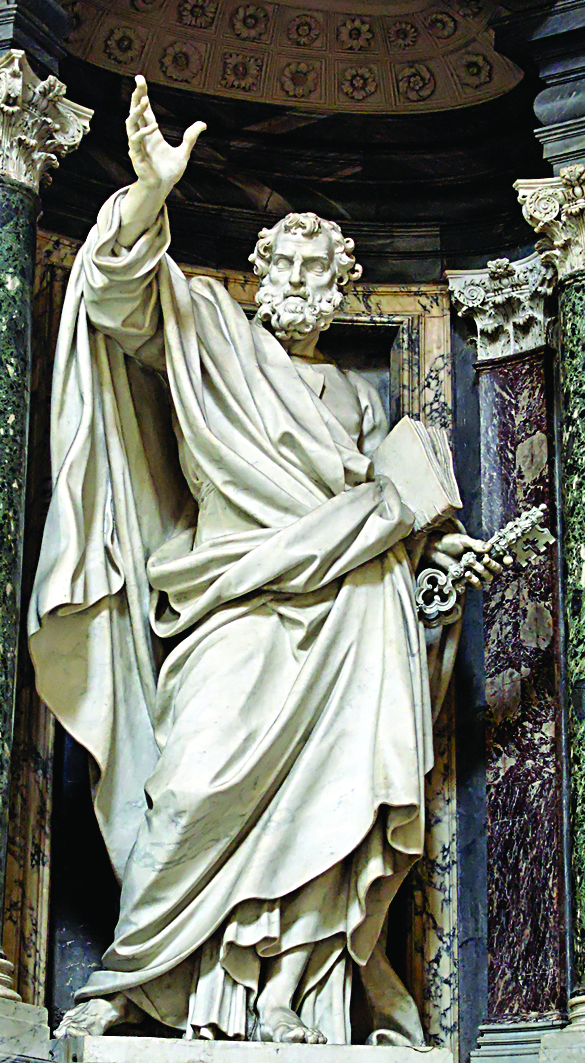 below, a statue of St. Peter inside the Basilica.

What other inscriptions in Rome can be placed with Agrippa’s? When you think about them, most of them seem tedious and verbose, or trite and unappealing, by comparison. But I think Rome boasts an inscription even greater than the Pantheon’s. It’s in St. Peter’s, adorning the inside of Michelangelo’s dome: TU ES PETRUS ET SUPER HANC PETRAM AEDIFICABO ECCLESIAM MEAM, ET TIBI DABO CLAVES REGNI CAELORUM. “You are Peter, and on this rock [“petram”] I will build my church, and to you, I will give the keys of the kingdom of heaven.”

This is Jesus talking to Peter in Matthew 16, giving him a new name, “Peter” (“Rocky”). The Latin pun between Petrus and petra comes right from Greek, which in turn comes from Aramaic (Jesus apparently really called Simon “Cephas”). It’s a remarkable fact that the pun works fine in Greek and then works in Latin as well because of Latin’s willingness to borrow foreign words. In this passage “Peter” becomes Simon’s new name as head of the universal Church — his papal name, you might say. The future tense verbs, aedificabo and dabo, are remarkable because they point to Christ’s Church-building as not an activity Jesus was engaged in at the time, but a future activity — as if pointing to all later Church history.

The best way to experience the inscription is to start with the Vatican’s remarkable “Scavi Tour,” which allows visitors (only a dozen at a time, which seems an appropriate number) to descend into the ancient cemetery upon which the basilica was built. There is one tomb — right beneath the altar — which shows all the typical signs of importance: later burials crowd around it; ancient graffiti is scratched onto it (mentioning Peter); several altars were built into its side, and the remains themselves were wrapped in purple cloth edged with gold. An ancient little tabernacle, called an aedicula, marks the tomb, and the aedicula itself is enclosed in a marble altar from the age of Constantine. Directly above this tomb—which by an undisputed ancient tradition has been known as the tomb of St. Peter — is the main altar of the basilica, the baldacchino of Bernini, and the dome of Michelangelo. From the purple cloth to the Constantinian altar to the dome of Michelangelo, each generation has in its own way paid homage to the simple fisherman buried on this site. 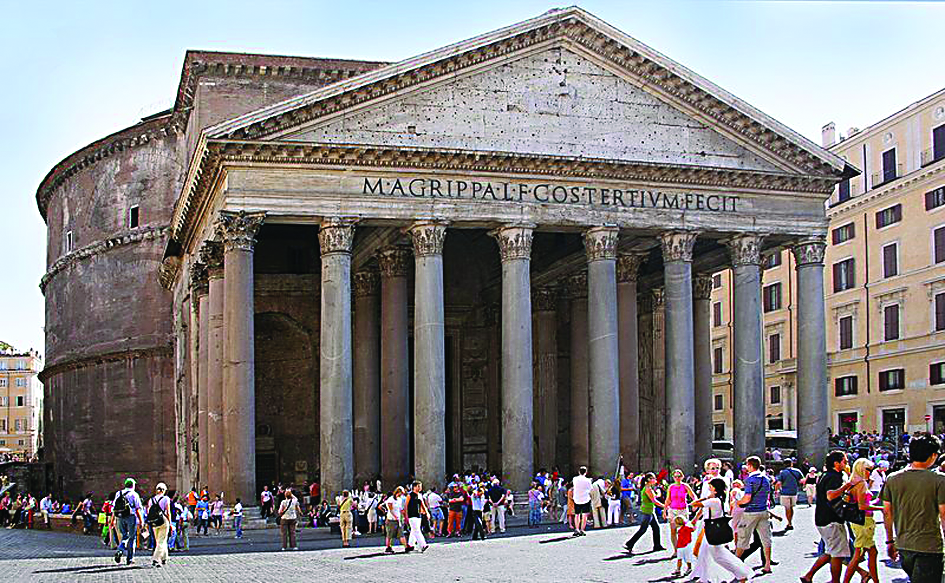 The Pantheon with Marcus Agrippa’s inscription

To complete your experience, you can climb the dome on foot, passing along a walkway on the inside of the dome just a few feet above the great TU ES PETRUS inscription. And so when you read the inscription, in the second person, as if spoken by the entire Body of Christ to its servant, you realize that it has all come true: an entire church has in fact been raised, with the bones of Peter as its foundation. The metaphor has become literal fact.

Now, how Jesus may have meant the metaphor is a subject for dispute, but oddly enough many of the people who don’t believe that Peter was meant to be the rock of Christ’s Church simply ignore this part of the Bible, rather than put forward any kind of convincing theory as to what else Jesus might mean. During a freshman year course at Princeton, I heard an English professor opine in class that “Jesus, as everybody knows, had never intended to start a church.” As a Catholic there was no way I was going to let this comment go unopposed, so I asked simply, “If you think Jesus never intended to start a church, how do you interpret those words that are in six-foot letters around the tomb of Peter, ‘You are Peter, and upon this rock, I will build my church’?” My professor looked at me, paused for a moment, and said, “That’s a very good response to a longstanding and perhaps insufficiently examined opinion of mine.” He then somewhat incongruously resumed his lesson plan, that despite the choosing of the 12, the sending out of the 72, the institution of a Rite of Baptism, the request to perform the Eucharist “in memory of me,” and the Great Commission (all of which I started pointing out), Jesus never intended to start a church (that was all Paul’s doing, you see). But my pilgrimage to Rome, taken just after graduating from high school, had already immunized me against the academic positing that all this was “Paulianity.” And honestly, one of the reasons why the experience was so intimate was that I knew Latin: when you climb to the top of the dome of St. Peter’s, and read that massive inscription word by word, walking around the whole dome, it affects you. You see how it has all literally been built on the foundation of Peter: you have an experience of Church history as an imperfect but deeply sincere attempt to honor and follow Christ the way that Jesus himself commended — by clinging to the rock of Peter. The inscription guides your interpretation and reading it as you stand there, you experience the building as its many builders, Michelangelo preeminently, wanted you to experience it: as a stone-and-mortar embodiment of the words of Christ, incarnated by his followers in honor of the man he chose to be chief of his apostles. It’d be hard to find an inscription that offers its reader more than that.

John Byron Kuhner is editor of In Medias Res, an online magazine published by the Paideia Institute.