An interview with the head of the Society of St. Pius X on the current status of relations with the Holy See. Bishop Fellay expects a decision this summer

By Inside the Vatican staff

“An analysis of the situation rooted in reality.” —Father Alain Lorans, Editor of the website Documentation Information Cath­o­liques Internationales (DICI), the communication agency of the Priestly Society of St. Pius X, which published the interview we reprint here on June 8, 2012

“So the attitude of the official Church is what changed; we did not.” —Bishop Ber­nard Fellay, head of the Society of St. Pius X, in the interview published here

“At the time of the Arians, the bishops labored in the midst of errors to convince those who were mistaken about the truth. They did not say that they wanted to be outside, as some say now.”—Ibid.

“In our Society, we distrust Rome because we have experienced too many disappointments; that is why some think that this could be a trap.”—Ibid.

Pope Benedict is said to be weighing a decision in the near future on whether or not to canonically recognize the Society of St. Pius X.

Many are regarding it as one of the key decisions of his pontificate.

Some even see in the recent turmoil in Rome, in the “Vatileaks” case and in the general uncertainty and confusion that case has generated, a possible attempt to influence, delay, or distract attention from, this important decision.

Why? Because how this Pope decides this case will go a long way to “setting the parameters” in coming decades for the Church’s continued reception and reinterpretation of the Second Vatican Council, and what role more traditional Catholic views and interpretations, like those of the followers of the late French Archbishop Marcel Lefebvre (d. 1991), will have. In this situation of uncertanity and expectation, the head of the followers of Lefebvre, Bishop Bernard Fellay (photo), has offered a wide-ranging analysis of what Pope Benedict may be considering, and of what it may mean. Here are two key questions and answers: 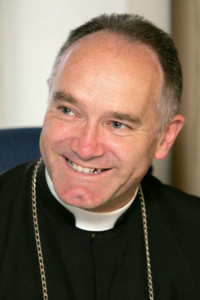 Bishop Bernard Fellay. In January 2009, Pope Benedict XVI lifted the ex-communication of Bishop Fellay and three other bishops of the traditionalist society.

Bishop Fellay: Everything is in God’s hands.  I place my trust in the Good Lord and in His Divine Providence;  He knows how to manage everything, even delays, for the good of those who love Him.

Was the Pope’s decision adjourned, as some magazines have said? Did the Holy See tell you to expect a delay?

Bishop Fellay: No, I have had no information about any calendar whatsoever.  There are even some who say that the Pope will deal with this matter at Castel Gandolfo in July.

Here are other important excerpts from the interview:

Most of those who are opposed to the Society’s acceptance of a possible canonical recognition allege that the doctrinal discussions could have led to this acceptance only if they had concluded with a doctrinal solution, in other words, a “conversion” by Rome.  Has your position on this point changed?

Bishop Fellay: It must be acknowledged that these discussions have allowed us to present clearly the various problems that we experience with regard to Vatican II.

What has changed is the fact that Rome no longer makes total acceptance of Vatican II a prerequisite for the canonical solution.

Today, in Rome, some people regard a different understanding of the Council as something that is not decisive for the future of the Church, since the Church is more than the Council. Indeed, the Church cannot be reduced to the Council;  she is much larger. Therefore we must strive to resolve more far-reaching problems.

This new awareness can help us to understanding what is really happening: we are called to help bring to others the treasure of Tradition that we have been able to preserve.
So the attitude of the official Church is what changed; we did not.
We were not the ones who asked for an agreement; the Pope is the one who wants to recognize us. You may ask: why this change? We are still not in agreement doctrinally, and yet the Pope wants to recognize us! Why?

The answer is right in front of us: there are terribly important problems in the Church today. These problems must be addressed. We must set aside the secondary problems and deal with the major problems. This is the answer of one or another Roman prelate, although they will never say so openly; you have to read between the lines to understand.

The official authorities do not want to acknowledge the errors of the Council.  They will never say so explicitly. Nevertheless, if you read between the lines, you can see that they hope to remedy some of these errors…

You acknowledge that some serious difficulties remain with ecumenism, religious liberty….  If a canonical recognition came about, what would be your attitude with regard to these difficulties?  Would you not feel obliged to be somewhat reserved?

Bishop Fellay: Allow me to answer your question with three inquiries: Did the novelties that were introduced during the Council start a trend of growth in the Church and an increase of vocations and religious practice? Do we not observe, to the contrary, a form of “silent apostasy” in all the countries of Christendom? Can we be silent when faced with these problems?

If we want to make the treasure of Tradition fruitful for the good of souls, we must speak and act. We need this twofold freedom of speech and action.

The year 2012 is not 1988, the year of your episcopal consecration.  In 2009 the excommunications were lifted, in 2007 it was officially acknowledged that the Tridentine Mass had “never been abrogated,” but now some members of the Society lament the fact that the Church has not yet converted…

Bishop Fellay: …One of the great dangers is to end up inventing an idea of the Church that appears ideal, but is in fact not found in the real history of the Church.  Some claim that in order to work “safely” in the Church, she must first be cleansed of all error. This is what they say when they declare that Rome must convert before any agreement, or that its errors must first be suppressed so that we can work. But that is not the reality.

It is enough to look at the Church’s past: often, and almost always, we see that there are widespread errors in the Church. Now the reforming saints did not leave the Church in order to combat these errors…

At the time of the Arians, the bishops labored in the midst of errors to convince those who were mistaken about the truth. They did not say that they wanted to be outside, as some say now.  Of course, we must always be very careful about these expressions, “inside,” “outside,” because we are of the Church and we are Catholic. But can we for that reason refuse to convince those who are in the Church, on the pretext that they are full of errors?  Look at what the saints did!… In this situation, which some currently depict as an impossible situation, we are being asked to come and work just as all the reforming saints of all times did…

Do you think that there are members of the Society who, consciously or not, espouse sedevacantist ideas?  Are you afraid of their influence? 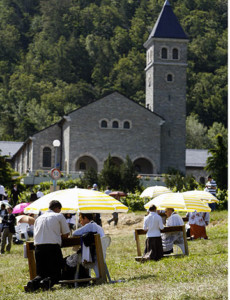 Priests listen to confessions during the ordination of priests by Bishop Bernard Fellay, superior of the traditionalist Society of St. Pius X, in Econe, Switzerland, on June 29, 2009. The Vatican has said it considers such ordinations “illegitimate,” although the priests are validly ordained. (CNS photo/Denis Balibouse, Reuters)

Bishop Fellay: Some may indeed be influenced by such ideas; that is nothing new. I do not think that there are that many of them, but they can do harm, especially by spreading false rumors. But I really think that the main concern among us is rather the question of trust in the Roman authorities, with the fear that what might happen would be a trap.

Personally, I am convinced that that is not the case. In our Society we distrust Rome because we have experienced too many disappointments; that is why some think that this could be a trap. It is true that our enemies may plan to use this offer as a trap, but the Pope, who really wants this canonical recognition, is not proposing it to us as a trap.

Several times you have said that the Pope personally wants the canonical rec­ognition of the Society.  Do you have a recent personal assurance from the Pope himself that this is truly his intention?

Bishop Fellay: Yes, the Pope is the one who wants it, and I have said it repeatedly. I have enough precise information in my possession to declare that what I say is true, although I have not had any direct dealings with the Pope — rather, with his close collaborators.

The April 7 letter signed by the three other bishops of the Society was unfortunately circulated on the Internet;  does the analysis that it presents correspond to the situation in the Church?

Bishop Fellay: I do not rule out the possibility of a development in their position…
I think that if my confreres see and understand that de jure and de facto the Roman proposal contains a genuine opportunity for the Society to “restore all things in Christ,” despite all the troubles that continue to exist in the Church today, then they will be able to readjust their judgment — that is to say, with the canonical status in hand and the facts on the table. Yes, I think so, I hope so. And we must pray for that intention.

A personal prelature is the canonical structure that you mentioned in recent statements… Are you inclined to accept the eventuality that future works may be possible only with the permission of the bishop in dioceses where the Society of St. Pius X is not present today?

In order to understand better what would happen, we must reflect that our status would be much more similar to that of a military ordinariate… All the chapels, churches, priories, schools, and works of the Society and of the affiliated religious Congregations would be recognized with a real autonomy for their ministry.

It is still true—since it is Church law—that in order to open a new chapel or to found a work, it would be necessary to have the permission of the local ordinary. We have quite obviously reported to Rome how difficult our present situation was in the dioceses, and Rome is still working on it.

Here or there, this difficulty will be real, but since when is life without difficulties? Very probably we will also have the contrary problem, in other words, we will not be able to respond to the requests that will come from the bishops who are friendly to us…
And therefore if a difficulty is not resolved, it would go to Rome, and there would then be a Roman intervention to settle the problem.