His Eminence Cardinal Angelo Scola, Archbishop of Milan, traveled to London for a meeting and a public lecture on November 15.

One of the leading bishops in the Catholic Church, Cardinal Angelo Scola, the archbishop of Milan (the largest diocese in Europe), came to London on a rare visit in November to present the experience of his Oasis Foundation on the topic of Religion, Plurality and the Common Good. Influenced at one time by Catholic Action and later by the Communion and Liberation movement, which was born in Milan, Scola went on to teach in Washington and for a time ran the Pontifical Lateran University before becoming Patriarch of Venice.

Oasis was established by the cardinal in 2004 in Venice, as a response to the great tensions between Christians and Muslims, especially in the Middle East — including persecution of Christian min­orities in many Muslim countries — to explore ways that the interaction between the two faiths could become more peaceful and fruitful. It publishes a journal in several languages (including English, Arabic, and Urdu), a newsletter, and two series of books. The events in London follow a presentation at UNESCO in Paris (2005), a dialogue with the rector and professors of Al-Azhar University of Cairo (2006), and a conference at the UN Headquarters in New York (2007).

The first meeting of the day was on the morning of Thursday, November 15, at the House of Lords, at the invitation of Lord David Alton, for an invited group of religious policymakers, scholars, and representatives of civil society. The second was a public lecture and discussion, cosponsored by the Catholic Union, on the afternoon of the same day, in Loyola Hall of Heythrop College, Kensington Square — the Jesuit College attached to the University of London.

The private briefing to religious leaders and intellectuals at the House of Lords was introduced by Lord David Alton, a leader of Britain’s pro-life movement.

In his opening remarks Lord Alton said: “The Oasis Foundation has a vast network of relationships: a board of promoters including cardinals and bishops, from the West but also from the countries with an Islamic majority, and a scientific board, which meet every year, alternatively in the West and in the Middle East. Oasis goes beyond mere intellectualism, and seeks to transcend usual labels such as multiculturalism and reciprocity and the usual ‘moderate–radical’ epithets.” 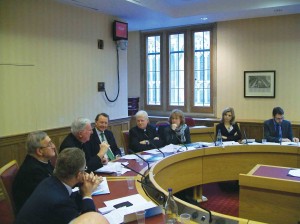 The first meeting of the day, on the morning of Thursday, November 15, at the House of Lords.

Lord Alton then introduced the three scholars who were to lead a debate after the lecture: Dr. Karim Lahham, a barrister in the UK and an expert on Islamic law; Professor John Milbank, an Anglican theologian at the University of Nottingham and leader of Radical Orthodoxy; and Ian Richard Netton, Shariah Professor of Islamic Studies at the University of Exeter, recently appointed consultor of the Vatican Commission for Religious Relations with Muslims. Other dignitaries, such as Prince Michael of Kent, were also in attendance.

In his address, Cardinal Scola began by admitting the problem posed by Islam to the prevailing status quo in Western societies. The secularist solution to the difficulties caused by religious diversity often requires participants to dilute or soften their incompatible truth-claims and political ambitions. Islam is not so willing to do this. Thus, by their mere presence as individuals and as communities, Muslims today pose the unresolved problem of the coexistence of different universal world visions in the public sphere.

Cardinal Scola’s proposal was that we should consider this problem from a cultural rather than just a theological or political point of view; that is, from the viewpoint of an inevitable “hybridization” of traditions. Earlier in 2012, Pope Benedict had blessed this approach when he said of Lebanon that “it is not uncommon to see the two religions within the same family. If this is possible within the same family, why should it not be possible at the level of the whole of society? The particular character of the Middle East consists in the centuries-old mix of diverse elements.”

We all want to avoid or limit violent acts, but we do not need to fear diversity as such. Our notion of the common good cannot be derived from a shared vision of the world, but we can start one stage further back, with the very fact of a common existence, or the . A practical consensus on the basis of our shared humanity, the cardinal argued, offers a basis on which to challenge “distorted practices of religiosity like fundamentalism,” and makes possible a continuing debate on important matters of anthropology, ethics, and theology, the nature of freedom and the quest for truth.

In his response, Dr. Karim Lahham underlined the fact that according to the most authentic schools of Muslim jurisprudence, Islamic laws should never be enforced against those who do not voluntarily accept or adhere to them, and the rule of law upheld by the majority must be upheld within any polity inhabited by Muslim minorities. He picked up on a point the cardinal made about the relevance of Catholic social teaching, concluding: “The present economic crisis affecting much of Europe gives a great deal of scope for the delineation of an intelligent and combined response by both faiths. Our economic system currently rests on a theory in which the materialist idea of luxury, wealth and leisure are considered the main ends of man. This is attached to a false philosophy that views work as a necessary evil rather than as a vocation, answering a divine call to service. An opportune response to this fallacy would be to respectively portray and clarify the relationship between belief and practice, intellect and act, idea and consequence, and thus uphold and empower man’s natural duty to intellectual and moral responsibility in the modern world.”

In the public meeting at Heythrop College on the afternoon of the same day, Cardinal Scola revisited the question of the humanum — a human “universal,” the common or shared experience of being human — that allows communication and translation across and between cultures. 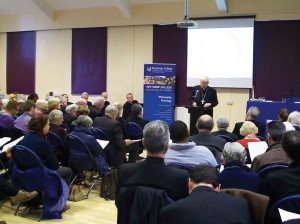 The public meeting at Heythrop College on the afternoon of the same day.

Recent revolutions in Islamic societies (the “Arab Spring”) seem, in Cardinal Scola’s view and based on the experience of Oasis in the Middle East and North Africa, to fall outside the sterile polarity of “secular” and “religious,” in that they concern human dignity and the experience of a shared life. As such they represent an important signal. A common culture is taking shape that has been influenced by both traditions. We need to put ourselves at the level of the new “shared language” of Christians and Muslims if we are to make progress in addressing these important questions.

The response of Dr. Winter (Abdal Hakim Murad, the Dean of the Cambridge Muslim College) included a tribute to “great Catholic scholars of the past century, many writing in the wake of Étienne Gilson’s work on Averroism and other tributaries to the phenomenon of neo-Thomism.” He agreed that the “principle of a universal humanum” also makes sense to Islamic thinkers. “We speak in terms of adamiyya — Adamic belonging — as the ground for all legal and moral rights,” he said. “Rights such as the right to property and to establish a family are considered, by Islamic law, to be innate, unearned rights, and are also sacrosanct: we speak, in the Maturidi tradition most notably, of ismat al-adamiyya — the inviolability of the status conferred simply by being Adamic, that is to say, precisely, part of the humanum. Typically, too, our moral philosophers go still further by using the term hurma — the sanctity of the human being, created, for Muslims as for Christians, in the very image of God.”

There are differences, he conceded, between Muslim and Christian reflection about what is universal in humanity, but “it is important for scholars in many disciplines to engage with the growing Oasis network to ensure the broadest possible conversation on these matters that affect us all.”

The result of the meeting was to reinforce this point with a wide range of influential thinkers in the UK. Even the Tablet newspaper was impressed — describing Scola as “an attractive combination of pastor and theologian, truck driver’s son and philosopher.”

The cardinal from Milan is undoubtedly having a global impact. Whatever happens next, he has opened an important new channel for communication with Islam, and directed much-needed attention to the plight of Eastern Christians caught in a cultural maelstrom.

Stratford Caldecott is a director of Second Spring Oxford.