First Tweet: “I Bless All of You from My Heart”

First Tweet: “I Bless All of You from My Heart”

Pope Benedict XVI in December — on the Feast of Our Lady of Gaudalupe — launched his very own Twitter account, sending a short inaugural message to his more than 1 million followers.

“Dear friends, I am pleased to get in touch with you through Twitter. Thank you for your generous response. I bless all of you from my heart,” it said.

His tweet — 139 characters — went viral as the number of followers of @Pontifex and its seven other extensions grew by more than 5,000 new people an hour, a Vatican official said. Tens of thousands of followers retweeted the messages in the short minutes after they were posted.

After the Pope gave his catechesis and blessing to those gathered for the general audience in the Vatican’s Paul VI Hall, an announcement came over the speakers saying the Pope was about to make his first tweet.

The Pope put on his glasses as Thaddeus Jones, an American and an official at the Council, showed him the screen that already had the message prepared and loaded. The Pope, with a tap, sent the greeting, which in English was just one character shy of the site’s 140-character limit.

Archbishop Claudio Celli, the council president, then showed the Pope his @Pontifex accounts, which had amassed 1 million followers in the 10 days before the first tweet. The Pope had difficulty in navigating the site after pressing a screen button with a determined push, which the archbishop then remedied with a more practiced tap.

About 45 minutes later, after the Pope left the audience hall, the first pair of tweets in a Q&A format was sent by Vatican officials. While the Pope sees and approves each tweet, all tweets after his inaugural message are sent by Vatican staff. The Pope personally answered three questions from three different continents that were culled from tens of thousands of queries and comments tagged with the #askPontifex hashtag. 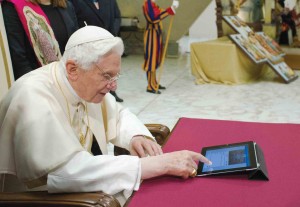 The first question was, “How can we celebrate the Year of Faith better in our daily lives?” The Pope’s answer was posted two minutes later: “By speaking with Jesus in prayer, listening to what he tells you in the Gospel and looking for him in those in need.”

About three hours later, the next pair was sent: “How can faith in Jesus be lived in a world without hope?” The answer: “We can be certain that a believer is never alone. God is the solid rock upon which we build our lives and his love is always faithful.”

Msgr. Paul Tighe, secretary of the social communications council, said they wanted to stagger the tweets so people waking up in later time zones would have something appearing near the top of their newsfeed.

The monsignor said he sifted through thousands of questions tweeted after the Vatican announced plans for the Pope’s new account.

Though many were crude or hateful, “there were some wonderful, touching questions, very honest and very genuine,” he told Catholic News Service December 12.

Some examples, he said, asked the Pope “how to balance spiritual life and being busy, how to find the time to pray.”

The monsignor said the Pope can’t be expected to answer every legitimate question submitted, but that is where other Catholics can step in.

The idea of launching the first papal tweets in a Q&A format also was meant to encourage other people to reach out and engage the world online, he said.

“We’re hoping other Catholics might engage with some of the questions” being asked, he said.

Among those surrounding the Pope during his Twitter debut were two students from Pennsylvania’s Villanova University, Mika Rabb and Andrew Jadick, who have been interning at the communications council, helping the office on the Twitter project. 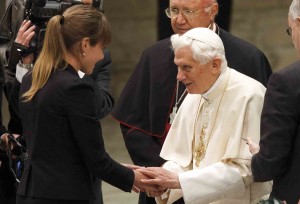 Claire Diaz-Ortiz, manager of social innovation for Twitter, also was by the Pope’s side; she had worked closely with the Vatican in setting up the accounts. She was live tweeting during the Pope’s audience and alerted the Twitterverse when the Pope’s accounts crossed the 1 million follower threshold just “minutes before the Pope sends his first tweet.”

The papal tweets will be posted with some regularity, but won’t be too frequent given the time constraints of the Pope and the fact that each tweet needs his approval, Msgr. Tighe had said.

Even though he won’t be physically sending the tweets, the messages “are pearls of wisdom coming from the heart of the Pope’s teaching and coming from his own mind and ideas,” he said December 5.

The Pope’s Twitter accounts are in eight languages, including Arabic. @Pontifex is the English feed, while the other language accounts use an extension of the main handle. For example, the Spanish feed is @Pontifex_es.

The handle “Pontifex” was chosen because it means “pope and bridge builder,” said Greg Burke, media adviser for the Vatican Secretariat of State. The name suggests “reaching out” and bringing unity not just of Catholics “but all men and women of good will,” he said December 5.