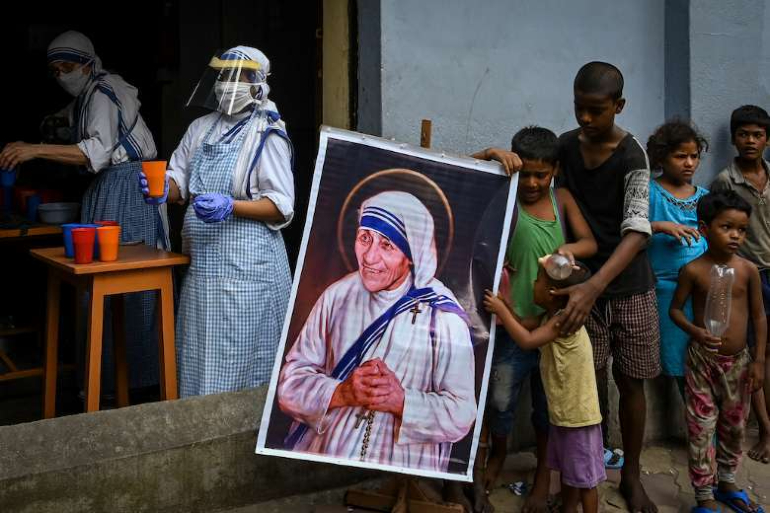 Nuns from Missionaries of Charity distribute food to the needy on ‘Peace Day’ to mark the death anniversary of Mother Teresa at the Mother House in Kolkata on Sept. 5. (Photo: Dibyangshu Sarkar/AFP)

Four Missionaries of Charity nuns and two Indian Jesuit priests stranded in trouble-torn Afghanistan after the Taliban took control have been moved to safety.

Missionaries of Charity, a religious order of women founded by St. Mother Teresa of Kolkata, has thanked people for their continued prayers and support leading to the safe evacuation of the stranded nuns from the strife-torn country.

The Taliban took control of Afghanistan on Aug. 16, much earlier than expected by the international community.

Among the four nuns, one of them is from India. Missionaries of Charity nuns started their mission in Afghanistan in 2004, three years after US-led forces freed the country from the clutches of the hardline Islamist group.

“Our four nuns have been shifted out of Afghanistan and are safe,” Sister Christy, based in Kolkata, the headquarters of the congregation, told UCA News on Sept. 8. “We thank everyone who prayed and supported us in the hour of crisis.”

She refused to divulge any further details of the rescued nuns and their current location except to say that they are not in India.

Yes, our priests have safely returned to India. They have completed their quarantine as per the Covid-19 protocol and are taking rest now

However, Catholic News Agency reported that the nuns and 14 disabled children in their care were taken to Rome on Aug. 25 along with 277 other people on two evacuation flights.

“The children, aged six to 20 years old, were residents of an orphanage founded in 2006 by the Missionaries of Charity in Kabul, which has now been forced to close due to the Taliban’s takeover of the city,” CNA reported.

Two Indian Jesuit priests — Father Jerome Sequeira, the head of the Jesuit mission in Afghanistan, and his assistant Father Robert Rodrigues — have returned to India from Afghanistan.

“Yes, our priests have safely returned to India,” a Jesuit priest told UCA News on Sept. 8. “They have completed their quarantine as per the Covid-19 protocol and are taking rest now.”

Jesuit sources told UCA News that their leadership has been instructed not to speak to the media about the priests’ return from Afghanistan or about their mission in the troubled country.

The Jesuits arrived in Afghanistan in 2004 to join hands with the Afghans in rebuilding the war-ravaged nation through education. That was two years after Pope John Paul II established a mission for Afghanistan in May 2002.

The Jesuits trained more than 300 young teachers, helping the education of more than 25,000 young boys and girls in four provinces.

Young girls were major beneficiaries of the Jesuit mission in a country still haunted by memories of the Taliban’s misogynist rule before it was toppled in 2001.

In 2014, suspected Taliban fighters abducted Jesuit Father Alexis Prem Kumar in Afghanistan while he was visiting a school in Herat province. The priest was released in February 2015.

The Jesuits’ links with Afghanistan go back more than 400 years. In 1581, Mughal Emperor Akbar took a Jesuit priest from Agra in northern India to Kabul.

A year later, in 1582, Jesuit Brother Bento de Goes stopped at Kabul on his way to China.