Here below is the text of the Editorial in the December 2017 Christmas edition of Inside the Vatican magazine. 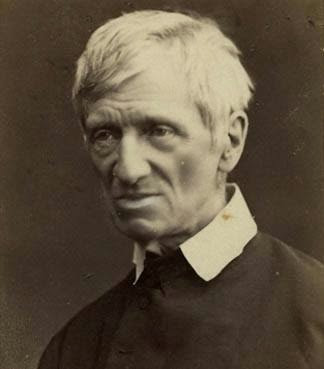 I cited at length a very beautiful and profound — and relevant — homily of Blessed John Henry Newman (photo left), because I felt that Newman, without knowing anything of our own present circumstances (of course), yet in this sermon spoke to some of the great problems of our time, both in the Church and in the world.

Also, for Christmas, we will have a special pilgrimage which will include a stay of several days inside Vatican City, enabling us to visit places not ordinarily easy to visit. Because a couple dropped out, we still have two places open. If you would like more information on this very quiet and peaceful Christmas pilgrimage to quite special places, please respond to this letter by return email. Here below are two images of places we will visit: St. Peter’s Basilica, where St. Peter is buried, and the Basilica of St. Francis, where St. Francis is buried.

Finally, we thought that we might offer special gift subscriptions to the magazine for Christmas, as Christmas gifts. If you call our order line in America, 1-800-789-9494, and tell them you read about this offer here, we will give an unlimited number of gift subscriptions at a price of just $25.00 (plus postage outside of the US). This is half off the listed price of $49.95. Just give the name and address of each person you would like to send a gift subscription to. It will be a way for your friends and family members to keep in touch with the Church throughout the year. 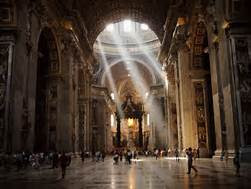 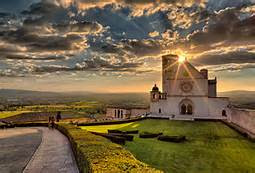 Editorial, Inside the Vatican, December 2017

“The light shineth in darkness”

A meditation on Christmas, excerpted from the writing of Blessed John Henry Newman (1801-1890). Newman meditates on the actual circumstances of Christ’s coming among us

“What were the actual circumstances of His coming? His Mother is a poor woman; she comes to Bethlehem to be taxed, travelling, when her choice would have been to remain at home. She finds there is no room in the inn; she is obliged to betake herself to a stable; she brings forth her firstborn Son, and lays Him in a manger. That little babe, so born, so placed, is none other than the Creator of heaven and earth, the Eternal Son of God.” — Blessed John Henry Newman (1801-1890), Sermon 16, “Christ Hidden from the World”

Since it is Advent, and soon Christmas, it seems appropriate to focus on Christ.

And few have thought about Christ, and the meaning of his coming, in a more penetrating and profound way than Blessed John Henry Newman, the English convert who defended the faith in his time, against many and great obstacles, giving a good example to us in our time.

“The light shineth in darkness, and the darkness comprehended it not.” —John 1:5 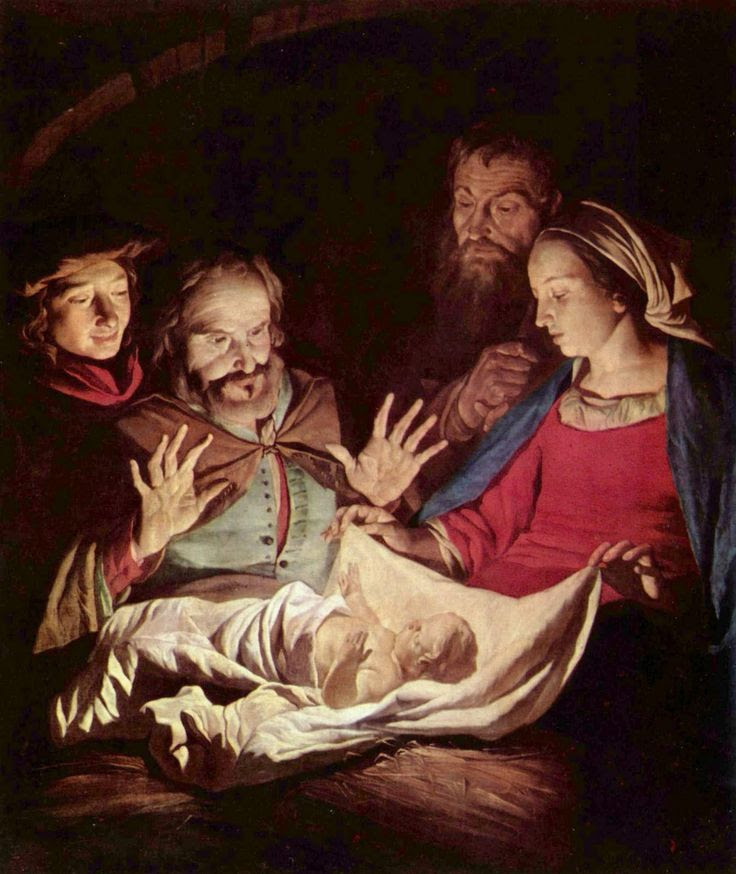 (The Nativity, by the Dutch painter Gerard van Honthorst (1592-1656). Gerard became especially noted for his depiction of artificially lit scenes, eventually receiving the nickname Gherardo delle Notti (“Gerard of the nights”). Early in his career he visited Rome, where he had great success painting in a style influenced by Caravaggio)

Of all the thoughts which rise in the mind when contemplating the sojourn of our Lord Jesus Christ upon earth, none perhaps is more affecting and subduing than the obscurity which attended it.

I do not mean His obscure condition, in the sense of its being humble; but the obscurity in which He was shrouded, and the secrecy which He observed.

This characteristic of His first Advent is referred to very frequently in Scripture, as in the text, “The light shineth in darkness, and the darkness comprehended it not”; and is in contrast with what is foretold about His second Advent.

Then “every eye shall see Him”; which implies that all shall recognize Him; whereas, when He came for the first time, though many saw Him, few indeed discerned Him…

Let us review some of the circumstances which marked His sojourn when on earth. 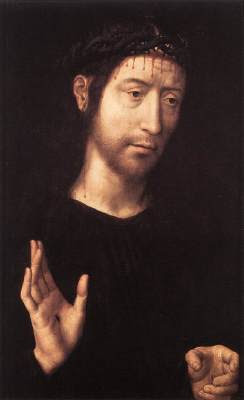 His condescension in coming down from heaven, in leaving His Father’s glory and taking flesh, is so far beyond power of words or thought, that one might consider at first sight that it mattered little whether He came as a prince or a beggar.

And yet after all, it is much more wonderful that He came in low estate, for this reason; because it might have been thought beforehand, that, though He condescended to come on earth, yet He would not submit to be overlooked and despised: now the rich are not despised by the world, and the poor are.

(Man of Sorrows, 1480s, Oil on oak panel, 53,4 x 39,1 cm, Palazzo Bianco, Genoa. This “Man of Sorrows” originally had a praying Virgin as its companion piece. Christ wears a dark, purple-brown robe, and turns sorrowfully towards his mother, in the original right wing, to show his wounds. The droplets of blood, mixed with sweat, are rendered in a highly refined, transparent manner. This version is one of the most ‘human’ interpretations of the Passion, because it presents Christ as a sorrowful man who still bears the marks of his torture)

If He had come as a great prince or noble, the world without knowing a whit more that He was God, yet would at least have looked up to Him and honoured Him, as being a prince.

But when He came in a low estate, He took upon him one additional humiliation, contempt — being contemned, scorned, rudely passed by, roughly profaned by His creatures.

What were the actual circumstances of His coming?

His Mother is a poor woman; she comes to Bethlehem to be taxed, travelling, when her choice would have been to remain at home.

She finds there is no room in the inn; she is obliged to betake herself to a stable; she brings forth her firstborn Son, and lays Him in a manger.

That little babe, so born, so placed, is none other than the Creator of heaven and earth, the Eternal Son of God…

4. Christ is still on earth.

He said expressly that He would come again.

The Holy Ghost’s coming is so really His coming, that we might as well say that He was not here in the days of His flesh, when He was visibly in this world, as deny that He is here now, when He is here by His Divine Spirit.

This indeed is a mystery, how God the Son and God the Holy Ghost, two Persons, can be one, how He can be in the Spirit and the Spirit in Him; but so it is.

Next, if He is still on earth, yet is not visible (which cannot be denied), it is plain that He keeps Himself still in the condition which He chose in the days of His flesh.

I mean, He is a hidden Saviour, and may be approached (unless we are careful) without due reverence and fear.

I say, wherever He is (for that is a further question), still He is here, and again He is secret; and whatever be the tokens of His Presence, still they must be of a nature to admit of persons doubting where it is.

And if they will argue, and be sharpwitted and subtle, they may perplex themselves and others, as the Jews did even in the days of His flesh, till He seems to them nowhere present on earth now…

The Church is called “His Body”: what His material Body was when He was visible on earth, such is the Church now.

Now, what is the Church but, as it were, a body of humiliation, almost provoking insult and profaneness, when men do not live by faith?

An earthen vessel, far more so even than His body of flesh, for that was at least pure from all sin, and the Church is defiled in all her members.

We know that her ministers at best are but imperfect and erring, and of like passions with their brethren.

In every age, then, Christ is both in the world, and yet not publicly so more than in the days of His flesh…

St. Paul, in his First Epistle to the Corinthians, shows both how easy and how fearful it is to profane the Lord’s Supper, while he states how great the excess of the Corinthians had been, yet also that it was a want of “discerning the Lord’s Body.”

When He was born into the world, the world knew it not.

He was laid in a rude manger, among the cattle, but “all the Angels of God worshipped Him.”

Now too He is present upon a table, homely perhaps in make, and dishonoured in its circumstances; and faith adores, but the world passes by.

Let us then pray Him ever to enlighten the eyes of our understanding, that we may belong to the Heavenly Host, not to this world.

As the carnal-minded would not perceive Him even in Heaven, so the spiritual heart may approach Him, possess Him, see Him, even upon earth.