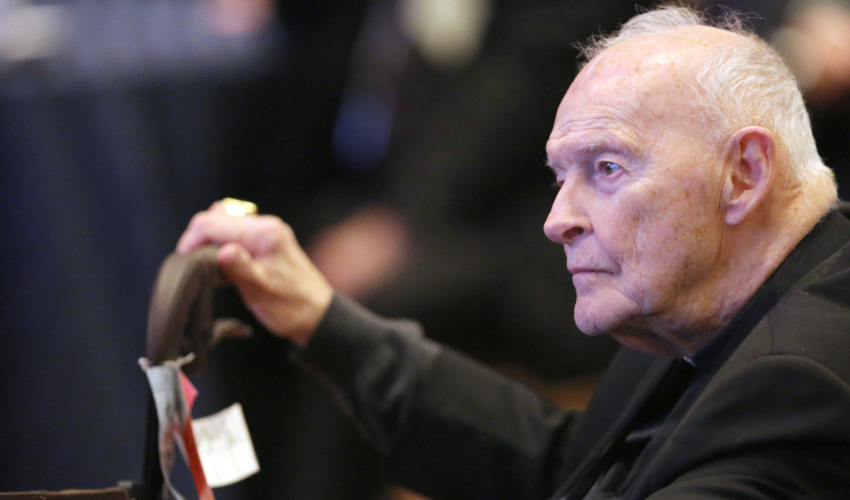 “Tout comprendre c’est tout pardonner” (a French saying meaning, loosely translated, “If one knew everything, one would forgive everything”). —A saying attributed to Anne Louise Germaine de Staël-Holstein (1766-1817), commonly known as Madame de Staël, a French-speaking Swiss author who lived in Paris in the age of the French Revolution and influenced literary tastes in Europe at the turn of the 19th century

“Behold, in iniquity was I brought forth, and in sin did my mother conceive me.” —Psalm 51:5

“I implore you, repent publicly of your sins, so as to make the Church rejoice and present yourself before the tribunal of Our Lord cleansed by His blood. Please, do not make His sacrifice on the cross void for you. Christ, Our Good Lord, continues to love you.” —Archbishop Carlo Maria Viganò, in a January 13, 2019, open letter addressed to former cardinal Theodore McCarrick

Vigano’s”Vigano’s Call to McCarrick to Make a Public Confession: Some Reflections

My last letter was on November 19. I wrote that a “trial balloon” had been launched in Italy seen by some as a “preliminary test” of whether it might not be possible — perhaps after Emeritus Pope Benedict XVI passes away (he will turn 92 in April) — to “abrogate” his 2007 Motu Proprio Summorum Pontificum. he I said I opposed any such “abrogation” as a rupture with the thinking of Benedict XVI. I then reflected on the fact that the essence of the Catholic liturgy is the “presence” (dwelling, habitation) of God here and now, arguing that this “presence” is referred to in Jewish theology as God’s Shekinah, His “glory.”

Since then, I have written no other letters. I was present in December at the funeral in New Hampshire of my brother’s wife, Brenda. I then led a pilgrimage to Rome, Norcia and Assisi at Christmastime.

A few days ago, I received an email from Archbishop Vigano containing the text of an open letter he had written to former Cardinal McCarrick. He said he wished the letter to be make public.

I came to know Vigano and McCarrick in recent years.

The Gift of Repentance

Archbishop Carlo Maria Viganò has once again written an open letter, this time addressed to former cardinal Theodore McCarrick. It is dated January 13, the Feast of the Baptism of the Lord.

Viganò urges McCarrick to recognize that he is “in a position to do great good for the Church” by means of a “public repentance.”

In this way, McCarrick could bring “a significant measure of healing to a gravely wounded and suffering Church,” Viganò says.

“Are you willing to offer her that gift?” the former papal nuncio asks.

Here is the full text of Viganò’s open letter to McCarrick.

As has been reported as a news by the Congregation for the Doctrine of the Faith, the accusations against you for crimes against minors and abuses against seminarians are going to be examined and judged very soon with an administrative procedure.

No matter what decision the supreme authority of the Church takes in your case, what really matters and what has saddened those who love you and pray for you is the fact that throughout these months you haven’t given any sign of repentance. I am among those who are praying for your conversion, that you may repent and ask pardon of your victims and the Church.

Time is running out, but you can confess and repent of your sins, crimes and sacrileges, and do so publicly, since they have themselves become public. Your eternal salvation is at stake.

But something else of great importance is also at stake. You, paradoxically, have at your disposal an immense offer of great hope for you from the Lord Jesus; you are in a position to do great good for the Church. In fact, you are now in a position to do something that has become more important for the Church than all of the good things you did for her throughout your entire life. A public repentance on your part would bring a significant measure of healing to a gravely wounded and suffering Church. Are you willing to offer her that gift? Christ died for us all when we were still sinners (Rom. 5: 8). He only asks that we respond by repenting and doing the good that we are given to do. The good that you are in a position to do now is to offer the Church your sincere and public repentance. Will you give the Church that gift?

I implore you, repent publicly of your sins, so as to make the Church rejoice and present yourself before the tribunal of Our Lord cleansed by His blood. Please, do not make His sacrifice on the cross void for you. Christ, Our Good Lord, continues to love you. Put your entire trust in His Sacred Heart. And pray to Mary, as I and many others are doing, asking her to intercede for the salvation of your soul.

Your brother in Christ,

The Baptism of the Lord

He spoke at length about his life.

I asked him about his family and upbringing.

An only child, he was born in New York City to Theodore and Margaret McCarrick in 1930. His father was a ship captain who died from tuberculosis when McCarrick was three years old.

McCarrick said he was part of an extended family with many cousins whom he would visit and their homes seemed to be overflowing and there wasn’t enough room for everyone to sleep — every bed and sofa was used.

But he also spoke of his father, saying the absence of a father during most of his childhood had been for him a source of deep suffering.

Father John Jenkins, President of the University of Notre Dame, in November gave Crux an exclusive interview in which he spoke about McCarrick and other clerics accused of sexual abuse (link): “[The tendency is] just to imagine that they (abusers of children and young people) are thoroughly corrupt people, but the problem is that it’s not true. It’s a part of their lives that is deeply problematic, but (there is) another part that is not…

“It’s tragic, and by this I don’t mean to imply not culpable, but there’s a deep tragedy here,” Jenkins said. “As with many people who are responsible for such acts — I haven’t spoken with him, so I’m speaking generally — there’s a certain rationalization that goes on that allows them to compartmentalize their lives and that’s part of the challenge, a failure to confront reality.”

Jenkins said McCarrick did a lot of good for the Church and (Notre Dame) university, and defined the prelate’s dual nature as illustrating “the mystery of human freedom and human failure.”

“Our deepest failures are those we don’t see as failures. There’s a sort of moral blindness in what we do, and that’s sometimes the greatest moral tragedy,” he said.

McCarrick will soon face an ecclesiastical trial in Rome on charges that he abused and molested minors and seminarians.

This is an hour of sorrow in the Church, but not an hour for despair.

In the sorrow, God’s glory may shine forth with still greater splendor.

Any act of true repentance, no matter how grave the sin, echoes out from time into eternity.

Yes, atonement must be made… but it can be made.