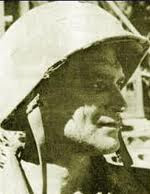 (Father Vincent Capodanno, a US Marine chaplain killed in Vietnam)

There are some men who sum up the character of a nation. One such man was Vincent Robert Capodanno. 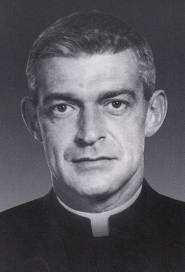 Capodanno represented what was best about America, and now those who remember him would like the Catholic Church to proclaim that he was a saint.

As part of that effort, a memorial Mass will be celebrated in his memory tomorrow in Rome, at the Church of Santa Susanna at 6 p.m. It would be gratifying if some who are in Rome and read this note would consider attending the Capodanno Mass.

Memorial Mass: 6 p.m., Church of Santa Susanna, on Monday, May 21, is in memory of Servant of God Father Vincent R. Capodanno. A Navy Lieutenant Chaplain, serving with the Marines in Vietnam, Father Capodanno was awarded the Congressional Medal of Honor posthumously for sustaining three separate combat wounds while anointing Marines who were dying. All are welcome to participate in this special Mass.

Vincent Robert Capodanno was born into an Italian Catholic family on Staten Island in 1929. He attended Catholic schools and entered the Maryknoll Missionary Society after his first year in college and was sent on to the Maryknoll seminary to complete his education. He was ordained in June of 1957.

Fr. Capodanno’s first missionary assignment was to Taiwan where he served in many capacities for seven years, usually among the poor and disadvantaged. After a brief return to the U.S., he was reassigned to a Maryknoll school in Hong Kong.

Seeking new challenges, as he himself said, Fr. Capodanno requested a new assignment and in December 1965, after finishing officer’s candidate school, he received his commission as a U.S. Navy chaplain.

His first assignment came in 1966 when he joined the First Marine Division in Vietnam. When his tour was complete, he requested that it be extended and he served as chaplain in a Navy hospital. After serving briefly at the hospital, he reported to the 5th Marine Division.

As a chaplain with the Marines, Fr. Capodanno quickly earned a reputation for selfless and untiring service to his men. He became affectionately known as the “Grunt Padre” among the fighting men. As a chaplain he had no command authority as did the other officers, yet because of the special love and kindness he offered, and his willingness to share the ordinary hardships of the most junior Marines, he inspired a loyalty surpassing that of the very finest officers.

This compassionate Marine chaplain never feared danger. When troops assembled for combat operations, he was with them. When they went in to the heat of battle, he was with them. During the fiercest fighting, all the infantry men would watch over Fr. Capodanno because they knew he would be moving among the men, ministering to those in greatest need, even to the very front line – never concerned with his own safety – concerned only with his men. The men had an unspoken resolve to “watch over our padre.”

Father Capodanno went among the wounded and dying, giving last rites and taking care of his beloved Marines. Always watching out for them, as they watched out for him.

Wounded in the face and suffering a severe shrapnel wound that nearly severed his hand, during the epic battle of Dong Son in September 1967, Father Vince moved to help a wounded Marine only yards from an enemy machine gun.

Father Capodanno died from a machine gun blast taking care of this young Marine. When his body was recovered, he had 27 bullet wounds.

As a young seminarian, Vincent Capodanno had written to his superior about a book he was given to read, Radiating Christ, and said “this book will be a great help (to me) in directing God’s light to the shadows throughout the world. The book’s author, Fr. Raoul Plus, was a French military chaplain in World War I.

The descent and incarnation described in Radiating Christ had now, in the end, brought Fr. Vincent to suffering and burial. The more he united himself with his Marines, the more he was united to Christ. As the Lord suffered with and for those He loved, so Fr. Vincent endured the harsh trials of war with and for those he served in love, for the sake of Christ and in imitation of Him.

On December 27, 1968 he was posthumously awarded the Medal of Honor in recognition of his selfless sacrifice.

On May 21, 2006 Fr. Capodanno was officially declared “Servant of God” as the cause for his sainthood moves forward.

What is needed now is a miracle, that is, an incident of supernatural healing due to the intervention of this holy priest. Therefore, people who wish to pray for a healing may consider praying for the intercession of the slain “Grunt Padre,” and if a miraculous healing occurs, report what has happened to Church authorities.