This letter includes a link to the 5th of our 18 Viganò Tapes (link here or in the box below), a brief discussion of remarks yesterday by Pope Francis about Cardinal Raymond Burke (though Burke was not named) and Burke’s attitude toward the virus vaccinations. (see below)

Question #5 of The Viganò Tapes: What should be the response of citizens and the faithful?

Answer: We find ourselves trapped in an impasse, a dead end, from which we cannot escape as long as we do not recognize it for what it is. If we think that the present crisis can be solved by addressing ourselves to the civil or religious authority, as if we were in conditions of relative normality, we continue to not understand that the responsibility for this crisis lies precisely in a betrayal carried out by those who hold authority.

Note: Please subscribe to our YouTube channel so that you will be notified immediately as we post the rest of these tapes, and all future YouTube content. It may be useful to be a subscriber in the event of important development in the months ahead. 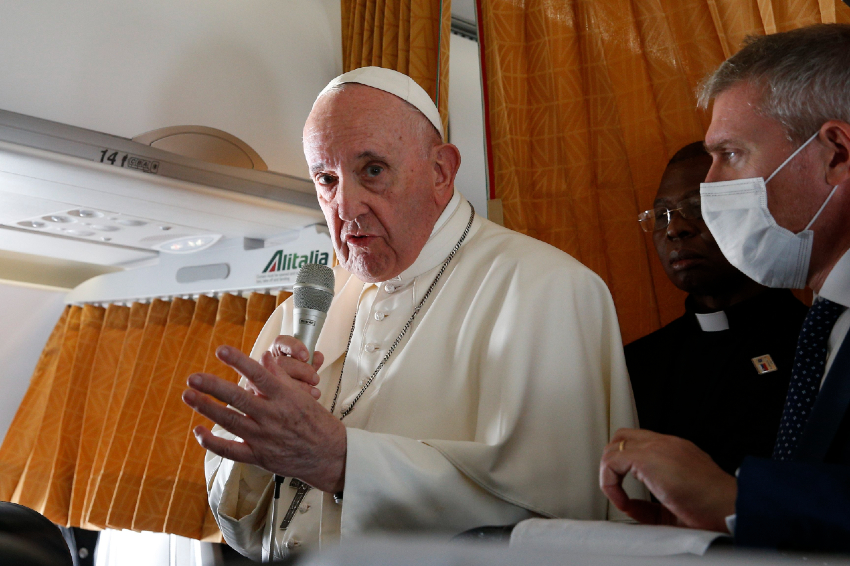 Pope Francis speaks with journalists on board an Alitalia aircraft en route from Bratislava, Slovakia, back to Rome, Wednesday, September 15, 2021, after a four-day pilgrimage to Budapest, Hungary and various places in Slovakia. (CNS photo/Paul Haring)

Pope Francis, Cardinal Burke, the Virus and the Vaccines

Also today, the comprehensive Italian website that acts as a useful aggregator of many of the articles about the Vatican each day, Il sismografo, had an interesting reflection on a reference Pope Francis made during his in-flight press conference yesterday, as he returned from Slovakia to Rome, to Cardinal Raymond Burke, and Cardinal Burke’s position of hesitation and concern about the vaccinations being administered to people.

(Here is a link to John Allen‘s report on the press conference: link)

Burke’s concerns have not had to do with whether the vaccines are effective, or may not have been sufficiently tested to determine whether they might have long-term negative side-effects, but rather a fundamental moral question: the possibility that some of the vaccines have used aborted human fetus cells in their formulation and/or in their testing, and Burke’s conclusion, based on Catholic moral teaching, that this is immoral and unacceptable (this link contains the cardinal’s reasoning).

Many in the Church leadership have made the argument that use even of such vaccines could be morally acceptable, since the benefit is believed to be so significant, and the use of aborted stem cells so “minor” and “remote.”

And Pope Francis has supported this view, saying receiving these vaccinations is “an act of love.” (link)

Still, these arguments have not persuaded Cardinal Burke, Bishop Joseph Strickland of Tyler, Texas, Bishop Athanasius Schneider, Archbishop Carlo Maria Viganò, and quite a few other Catholic bishops and theologians around the world, who remain, in conscience, opposed to any use of aborted human fetal cells in these medical, or other new technologies.

Here is what Il sismografo wrote:

The Pope’s words about a “(vaccine) denier” cardinal who ended up in hospital with Covid-19. Perplexity and disorientation in the Catholic world (link)

Yesterday Pope Francis, on the plane that brought him back to Rome from Slovakia, answering a generic question about vaccines posed by the Slovakian journalist Bohumil Petrik of Dennik Standard, perhaps due to fatigue and due to the precariousness (suddenness) of the moment — many events in a short time, after almost four days of intense pastoral commitments and various movements from one place to another — made some statements that everyone immediately interpreted as a direct reference — but without ever naming the person — to the experience — human, personal and painful — of the American cardinal, very conservative and anti-Bergoglio, Raymond Leo Burke, hospitalized in mid-August for Covid-19, in intensive care for several days but, thanks be to God, today at his home on the mend.

Many ask themselves: what need was there (Note: for Pope Francis) to bring the story to the public, in a press conference in front of the world press, and in these terms?

Here is the journalist’s question and the Pope’s answer (Vatican News transcript; video from minute 5):

Question: Vaccination has divided Christians, even in Slovakia. You have said that it is an “act of love” to take the vaccine. So when someone does not get the vaccine, what would you call it? Because some believers, too, have felt discriminated against (Note: for not accepting to be vaccinated). There are also different approaches in different dioceses on this point (…) and therefore, how to come together, how to be reconciled on this issue?

Response of the Holy Father:

“It’s a little strange because humanity has a history of friendship with vaccines: measles, polio… Now this has come [Note: the Pope seems clearly to mean “now this new attitude of hesitation toward the anti-Covid vaccines” has come].

Perhaps it has come because of the virulence and uncertainty, not only of the pandemic, but also due to the diversity of vaccines and also the fame of some vaccines, which are (believed to be) not suitable or are (said or believed to be) a little more than distilled water.

This has created fear in the people.

Others say it (vaccination) is a danger because they say that with the vaccine the virus gets inside you, and many arguments have created this division. (Note: He means the arguments and polemics over these points have caused the division.)

Even in the College of Cardinals there are some [vaccine] deniers [Note: The word in the original Italian is “negazionisti,” “negationists,” the term used in Italy to refer to mean “Holocaust deniers”] and one of these, poor fellow [Note: the word in Italian is “poveretto”], was hospitalized with the virus. The irony of life.

[Note: In other words, Francis is here, evidently, referring to Burke’s concerns about the morality of the vaccines, considering them to be comparable to, or the same as, a type “vaccination denial” or “vaccination negationism,” then adding that it was therefore “ironic” that Burke ended up almost dying from the Covid virus.]

I do not know how to explain it well, some say it is because the vaccines have not been sufficiently tested and they are afraid… We must clarify and speak with serenity about this.

[Note: This ends the quote from Francis at the press conference. Then Il Sismografo continues with this comment…]

As we said, and as the press writes today, the Pope was referring to Cardinal Raymond L. Burke, the only “denier” [“negazionista” in the original Italian] cardinal who ended up in hospital for Covid / 19.

Other cardinals who have been hospitalized in the past (for example the Italian Gualtiero Bassetti, who in 2020 was in intensive care due to the virus (link), or are hospitalized today like the Venezuelan Jorge Urosa, have never been deniers [“negazionisti“]. Indeed, there do not appear to be any cardinals who are deniers except Cardinal Burke.

In truth, this story is very painful for the Catholic world, full of perplexities, sufferings and questions. Why are we coming to the point of using these tones and ways?

[Note: Thus ends the comment of Il Sismografo. And, in fact, I must confess: I do not understand clearly what the editors mean by these final words. At the very least, their words suggest that the editors feel some concern that there is great confusion in the Catholic world on these matters, and wish the confusion to be diminished. Still, it is not clear to me on what fixed basis, on what truths, the editors believe the diminishment of the confusion ought to be constructed.—RM]

Also during the in-flight press conference on September 15, 2021, the Pope recalled an incident where he distributed communion while a priest in Argentina in an old folks home.

Here is how Reuters reported what the Pope said:

THE PAPAL PLANE, Sept 15 (Reuters) – Pope Francis on Wednesday related how he once inadvertently gave communion to an elderly Jewish woman, who only afterwards told him about her religion.

“I once went to say a Mass in a home for the elderly,” he told a reporter who had asked him if he had ever denied communion to anyone.

He said he had not and then told a story about when he was a priest in his native Argentina.

“(At the home for the elderly) I said ‘those who want to take communion raise your hand’ and they all did, all the old men and old women wanted it,” he said.

“Later this woman said to me, ‘thank you, thank you, father, I’m Jewish.’ I responded: ‘so is what I just gave you’ but let’s move on,” he said, laughing.

Catholics believe the communion bread is the body of Jesus Christ, who was Jewish.

Later today, Il Sismografo published an email (link) from someone (the name of the author is withheld) evidently a supporter of Cardinal Burke:

About the “denier cardinals” of SARS-CoV-2 (coronavirus 19) (link)

Regarding our post on the words of the Holy Father and “some denier cardinals,” including Raymond Leo Burke struck for weeks by a serious coronavirus 19 infection, we received an email (signed) to which we believe it is right to give space and voice.

Text of the email message:

“I am an assiduous reader of “il sismografo” and I appreciated the fact that you share the perplexities of many Catholics regarding the words of Pope Francis almost certainly referring to Cardinal Burke. For the sake of truth, however, allow me to note that Cardinal Burke, despite having had doubts about some aspects of the management of the pandemic, has never denied the existence of the virus, and it is therefore wrong to call him a “denier.” [Note: “negazionista” in the original Italian]

As an example, I would like to mention only the long speech by the Cardinal of 21 March 2020 — Message on the Combat against the Coronavirus, COVID-19 – Cardinal Raymond Burke (cardinalburke.com) — where His Eminence spends some time on explaining in detail certain sanitary measures (such as social distancing, hand washing and surface disinfection). Not to mention the many times Cardinal Burke has expressly prayed for those affected by the virus.

Thanking you for your precious work, I cordially greet you.

(Signature of the sender)

Here below is the journalist’s question and the Pope’s answer during the papal flight yesterday: Vatican News transcript; video from minute 5):