Halfway through February, Benedict XVI has less than two weeks left as Pope. His pontificate will end at 8 p.m. on February 28.

The city has begun to accept the fact that the previously unthinkable will actually occur: that Benedict will step down from the papacy, and devote himself to a life of prayer “hidden from the world” in a convent in the Vatican gardens.

After dramatic days, days of lighting bolts striking down on the very cupola of St. Peter’s Basilica a few hours after his announcement of his decision to step down, days of drenching rain, of bitter chill, of long nights and grey days, today was warmer, sunnier, though still quite cold.

(Here below is an image of the remarkable lightning bolt which struck St. Peter’s Dome at about 6 pm in the evening on Monday, February 11; the Pope had announced his decision to renounce his office at about 11:40 am, about 6 hours before. There are other photos which seem clearer, but I chose this photo because it shows dramatically how grey and miserable that evening really was.) 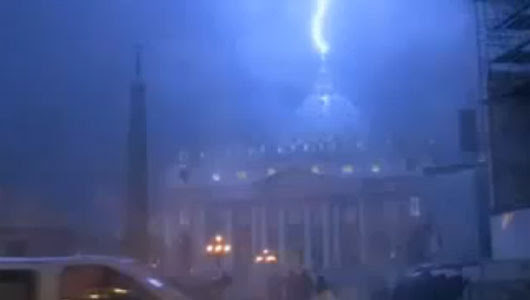 For the Pope, today was a normal working day.

Benedict received the President of Romania, Traian Basescu, at 11 this morning. (Trajan was the name of the Roman emperor who conquered Dacia, as it was then called, in about the year 100 A.D., and the president of Romania’s name, being the same, still echoed that distant conquest from 1,900 years ago.)

There was nothing unusual: 20 minutes of private conversation (the Romanian language, because of Trajan’s conquest, is derived from Latin and so quite close to Italian), an exchange of gifts, and greetings afterward to two journalists, Salvatore Mazza of Avvenire and Cindy Wooden of Catholic News Service, who formed the “pool” to observe the occasion and report back to the other journalists waiting in the press office.

“In the name of all the Vaticanists, we thank you for your commitment to the service of the Church, we are all praying for you,” said Mazza, president of the association of journalists accredited at the Vatican.

“Thank you for your teaching and for helping us to explain everything with clarity, this helped us in our work,” said Wooden.

“Grazie a voi per la preghiera,” (“Thanks to you for your prayer”), the Pope answered.

Toward noon, the Pope received a charitable group “Pro Petri Sede” (“For the See of Peter”) from Belgium, Luxembourg and The Netherlands. Benedict greeted the group in French. 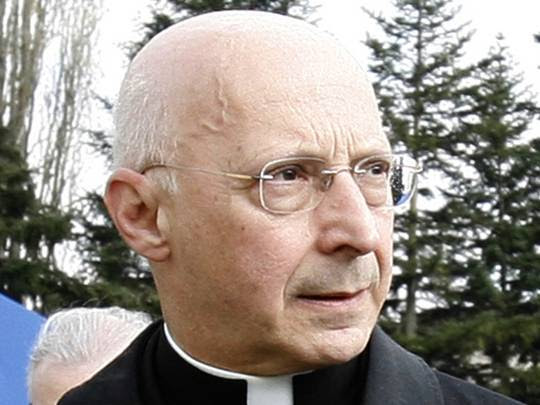 To close his working day, he received a group of Italian bishops from Liguria, the region around Genoa, headed by Cardinal Angelo Bagnasco, archbishop of Genoa and president of the Italian bishops’ conference.

Bagnasco (photo above) is a man some Church watchers believe coud be a leading candidate to be the next Pope.

Bagnasco was born in Pontevico, near Genoa, where his family was evacuated during World War II. He once said in an interview: “I became an altar boy in my parish in the historic center of Genoa, in Piazza Sarzano, when I was six years old. My old parish priest was Abbot Giovanni Battista Gazzolo, first, and afterwards Monsignor Carlo Viacava while his deputy was a young curate, Don Gianni Zamiti — the latter two are still alive and overjoyed that their little altar boy has become their archbishop — who supervised us on afternoons in the parish club where we went to play. The desire to become a priest was born precisely when I was in elementary school, but I didn’t confide it to anybody. Afterwards I went to a co-ed middle school, always with that desire in my heart.”

Bagnasco attended the liceum of classics at the archdiocosean seminary of Genoa, and was ordained to the priesthood on June 29, 1966, by the then-archbishop of Genoa, Cardinal Giuseppe Siri.

While a priest in Genoa, he received a degree in philosophy from the University of Genoa, served as professor of metaphysics and contemporary atheism at the Theological Faculty of Northern Italy, and led the archdiocesan liturgical and catechesis offices. Cardinal Bagnasco has expressed strong opposition to abortion, especially with regards to the RU-486 pill, which has abortive effects on the conceived embryos. He has also opposed homosexual unions, and as a consequence has received death threats.

(By chance, I was able to see Bagnasco this afternoon, as he walked down the Borgo Pio. He is not tall, and when one meets him he seems a simple, humble, intelligent, thoughtful man.)

New President for the Vatican Bank

In the press office, several dozen journalists listened to Fr. Federico Lombardi’s 1 p.m. briefing today on the Vatican’s decision to name a new president for the Vatican bank.

The choice, announced at mid-day today after a vacancy dating back more than 8 months, to last May, fell on German lawyer and financier Ernst von Freyberg.

This decision is likely to be one of the last major acts of Benedict’s papacy.

The Pope gave von Freyberg his personal support on Friday, according to a Vatican statement.

Freyberg is a member of the ancient Sovereign Military Order of Malta. He replaces Ettore Gotti Tedeschi, an Italian banker close to Opus Dei who was removed from the post in late May, accused of both negligence and “increasingly eccentric behavior.”

Von Freyberg’s task as president of the Vatican bank will be to bring about greater transparency in the bank’s activities, as long desired by Pope Benedict XVI.

US and European regulators have expressed doubts about the Vatican’s compliance with international transparency standards. Italian authorities on January 1 month blocked the use of credit cards in the Vatican, a block which ended on February 12 when the Vatican reached an agreement with a Swiss payment company to allow the resumption of card payments. (However, I was still not able to pay a bill with a credit card in the Vatican on Wednesday and Thursday.)

When I spoke with one of my confidants later in the afternoon, he said to me that he believed that the issue of the Vatican bank was one all the cardinals in the college should demand clarity on before the Conclave begins.

He also told me that he thought Benedict had taken his decision in part because he feared the consequences of a stroke. That is, the Pope decided that it would be more harmful and destabilizing to the Church if he were suddenly incapacitated or paralyzed, than if he were to renounce his office while still in relatively good health. My friend told me that there had been a history of strokes in the Ratzinger family and that it was a matter of real concern.

In the press office, I saw Salvatore Izzo, the correpsondent for the Italian news agency AGI, who is one of the most respected Vaticanists. I have known him for more than 25 years, since the 1980s.

In an article he published today, he noted that Cardinal Roger Mahony of Los Angeles will participate in the March Conclave to elect the new Pope, though Mahony’s successor as the archbishop of Los Angeles, Jose Gomez, has told Mahony he may not exercise any public function in the Los Angeles arcdiocese, following the release by court order of previously secret Church documents, which seem to show that Mahony did not actively pursue some 129 cases of alleged abuse of children by arcdiocesan priests.

Izzo notes that Ireland’s Primate, Cardinal Sean Brady, to whom the Pope has recently sent a coadjutor with full powers “perche’ riconosciuto responsabile anche lui di almeno un insabbiamento” (“because he too has been recognized as responsible for at least one cover-up”) will also participate in the Conclave.

But, Izzo adds, there will also be in the Sistine Chapel “campioni” (“champions”) of the struggle against abuse of children.

Izzo says that only O’Malley came to Schoenborn’s defense a couple of years ago when a number of cardinals criticized Schoenborn for being too harsh against Church prelates in cases concerning the alleged abuse of children — a charge now also being made in some ecclesial circles against Gomez.

Izzo then gives a lengthy account of Schoenborn’s behavior in the case of Cardinal Hermann Groer, his predecessor as archbishop of Vienna.

Schoenborn became Groer’s auxiliary in 1994. Groer was still solidly entrenched at that time, though disturbing allegations were beginning to emerge from ex-Benedictine novices who had suffered under Groer’s “attentions,” Izzo writes.

Groer denied all charges, and his fellow bishops at first defended him, calling the attacks “slanders” and “anti-clerical attacks.”

In Rome at that time, this was the generally accepetd line — but not by Joseph Ratzinger, then head of the Congreagtion for the Doctrine of the Faith, “che sul tema risulto’ in minoranza e per questo proprio in quel periodo aveva chiesto per la prima volta al Papa di lasciare il suo incarico di prefetto” (“who in this matter ended in the minority and for this reason precisely at that time asked for the first time that the Pope [John Paul II] allow him [Ratzinger] to leave his office as Prefect”).

When the accusations against Groer became more detailed and grave, Pope John Paul took action, making Schoenborn his coadjutor with full powers. Groer resigned a few months later. Schoenborn in Lent of 1996 preached the Lenten Spiritual Exercises in the Vatican, and was given the pallium as Vienna’s archbishop on June 29, 1996. He was made a cardinal in 1998.

Groer retired to a convent of nuns in Dreden, Germany, where he passed away.

As evening came on, Vatican City was quiet. The offices of the Curia will be closed next week, as Italian Cardinal Gianfranco Ravasi preaches the spiritual exercises, which the Pope will attend.

The following week will be the Pope’s last week as Pope. He will leave his post on Thursday, February 28. He will fly that afternoon by helicopter to Castel Gandolfo, about 20 miles from the Vatican in the Alban hills.

The Conclave is now expected to begin on or about March 15. It is not known how long it will last. The Conclave to elect Pope Benedict only lasted two days. But it is not impossible that the Conclave could last five, six, or seven days, or even longer.

As I walked away from Vatican City this evening, I ran into a cardinal from Latin America who was walking alone.

We spoke for a few minutes. After we talked about the historic events of these days, I told him I had just received a phone call from Moscow from a member of the Russian Orthodox Church, who was proposing a concert in honor of the Virgin Mary in Rome in October, offered by the Russian Orthodox Church to the new Pope, and the former Pope, as a sign of friendship between separated Christians. He had asked me to help organize it.

The cardinal said the theme of Christian unity was important, not only to him, and to many of the cardinals. “We need to find those deep truths we share in order to build true unity of faith,” he said.

I noticed a string of beads in the cardinal’s hands.

“Sorry I interrupted you,” I said.

“Now I will finish,” he replied.

He was praying the rosary.

I left him near St. Peter’s Square as night fell, and the wind grew chill. 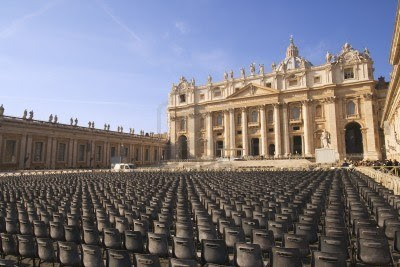