“What only remains is great love.”—St. Edith Stein, 1942, year of her death in a concentration camp

What only remains is great love.

What does Lent mean? It’s essence, I think, is new beginnings. The chance to begin again, even after failure, even after despair. 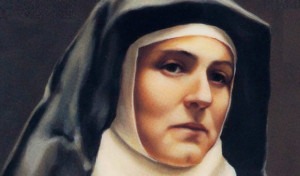 h a chance, such an opening to new life, is based on something even more profound, which is… that love underlies creation, underlies everything that is, and will be all that remains when all else passes away.

This was the belief of St. Edith Stein, the great German Jewish philosopher who became a Catholic nun and died at Auschwitz in 1942. She taught this belief by her life and death. This means she is a good guide for us in this Lenten season.

Edith was born in Breslau, Germany on October 12, 1891, to Jewish parents Siegfried and Auguste Stein. Her unfinished autobiography, Life in a Jewish Family, chronicles a very normal and happy family life from her birth until 1916 — she never wrote any more because her writing was interrupted when she was arrested and deported to a concentration camp.

“Edith began this book in the 1930s as an antidote to the rising anti-Semitism in her beloved Germany,” writes Angela Miceli Stout on a website of the Carmelite Order (link). “She dearly loved Germany, loved its history, loved being a Germany citizen, but she was also keenly distressed at its tempestuous political situation during World War I and in the decades the followed. Edith even took a leave of absence from her university studies during World War I to serve as a nurse for wounded soldiers. To the end, she loved her German identity.”

Edith’s autobiography reveals a woman who valued relationships. She loved her 7 older siblings and ministered to many of them in times of suffering. She deeply cared for her friends and had a gift to understand their characters and see each of them with the utmost charity. She deeply loved the country that would not let her work as a university professor because she was a Jew and a woman. She loved those countrymen who, in the end, sent her and so many fellow Jews to her horrific, untimely and cruel death. She understood with a profound clarity that all human persons depend on each other and are responsible for each other.

Edith was known as an extremely intelligent and gifted child. She says that although her mother was quite religious and did observe the basic tenants of Judaism, Edith and her siblings were not very religious and often ridiculed their mother’s piety. As a young teenager, Edith self-consciously decided that she did not believe in God. It was not until she went on to receive her doctorate in philosophy that Edith would find herself attracted to the Catholic faith.

Edith studied for her doctorate under the famed professor of phenomenology, Edmund Husserl. It was also here that she began to be more open to the Christian faith, as most of her friends were Christians, both Protestant and Catholic. She was a brilliant student, and all her friends and family teased her for her great passion to study with Husserl. She writes that on one New Year’s Eve before she left to study in Goettingen for her doctorate, her sisters and friends wrote a little verse about her: “Many a maiden dreams of ‘busserl’ [kisses in German], Edith, though, of naught but Husserl. In Goettingen she soon will see Husserl as real as real can be.” (Life in a Jewish Family, p. 220). This anecdote not only shows her passion for the intellectual pursuit of truth, but it reveals her humanness and the fondness of her friends and family.

While she was visiting a friend in 1921, she providentially found a copy of Teresa of Ávila’s autobiography. She read it in one sitting and immediately felt that the saint’s words in the book fulfilled the desires of her heart, and on January 1, 1922, Edith Stein became a Catholic. Although her family was far from pleased by her decision, Edith remarked that they all respected her because they knew that Edith ardently sought truth with her whole being. She was keenly aware of the impact of her conversion on those she loved. Because her mother was so devastated by her conversion to Catholicism, Edith waited 11 years to fulfill the desire of her heart. In 1933, she entered the Carmel in Cologne, Germany. She made her final vows in 1938, taking the name Teresa Benedicta of the Cross, which means “Teresa Blessed of the Cross” (or “Blessed by the Cross” in some translations).

Her name reflects her beloved spiritual sister and fellow Carmelite, Teresa of Ávila, and her fate of sharing in the Cross of Christ in a very tangible, visible way. Edith, now Teresa Benedicta of the Cross, viewed her own life as a sacrificial offering to God for her people. In 1939, she offered her life to God for all those she loved: for the Church, for the Carmelite Order, for the Jewish people, for her family, and for “the deliverance of Germany and peace throughout the world.” (Waltraud Herbstrith, Edith Stein: A Biography. Ignatius Press, 1992, p. 162). Rather than give in to despair, darkness, and hopelessness, Edith offered her own life and sufferings to God for others — even for those who murdered her. She saw herself as her brothers’ keeper, and asked Our Lord to accept her life for theirs.

By 1938, the threat of the National Socialists was so great in Germany that the nuns moved Edith to another Carmelite convent in Echt, Holland. It was here, as we know, that Edith and her sister Rosa were brutally taken in 1942 to their deaths in Auschwitz after the Dutch bishops took a strong stand against the Nazis. But even on the journey to her death, Edith’s great love made a lasting impression on all those who were with her.

A Jewish businessman from Cologne, Julius Markan, who had been put in charge of the prisoners at Westerbork Camp, remembers how she cared for those around her as they faced death. He wrote:“Amongst the prisoners who were brought in on the 5th of August, Sister Benedicta stood out on account of her calmness and composure. The distress in the barracks and the stir caused by the new arrivals were indescribable. Sister Benedicta was just like an angel, going around amongst the women, comforting them, helping them and calming them. Many of the mothers were near to distraction; they had not bothered about their children the whole day long, but just sat brooding in dumb despair. Sister Benedicta took care of the little children, washed them and combed them, attending to their feeding and other needs. During the whole of her stay there, she washed and cleaned for people, following one act of charity with another, until everyone wondered at her goodness.”

Another person who met her on the way to her death, Dr. Wielek, recalled a conversation he had with her in Westerbork just before she was transferred to Auschwitz: “In one conversation she said to me: ‘The world is made up of opposites, but in the end nothing remains of these contrasts. What only remains is great love. How is it possible for it to be otherwise?’”

Indeed in this world, we do experience such opposites: good and evil, joy and suffering, life and death. “What only remains is great love.”

Edith’s final conviction teaches us how to suffer, how to offer ourselves, and how to embrace a world so seemingly full of violations against the human person. Edith shows how to live as a balm for these wounds in the world — and how such a life lived for Christ will ultimately heal it.